Regional anesthesia for upper extremity surgery has many advantages over traditional general anesthesia with systemic opioids. Among these advantages are more effective postoperative analgesia, decreased requirements for systemic opioids and the potential complications associated with their use, and an ability to avoid instrumenting the airway.[1] If performed by experienced operators it can provide successful surgical anesthesia in a high majority of cases (94.2–94.7%) with a very low complication rate.[2-4]

The supraclavicular block, first described by Kulenkampf, provides a consistent homogenous blockade of the entire upper extremity without preferentially sparing the cephalad (musculocutaneous) or caudad (ulnar) nerves of the brachial plexus.[5] The popularity of the supraclavicular approach to block the brachial plexus substantially increased with the introduction of ultrasound technology as it greatly reduced the incidence of pneumothorax. Prior to the introduction of ultrasound, the pneumothorax rate was reported between 0.6% and 5%.[6] This rate is now very low as evidenced by the lack of any reported pneumothoracies in four publications with a combined patient population of 2,590.[2][4][6-7] Thus, the ultrasound-guided supraclavicular block will be described below.

It should be noted that some clinicians prefer to use nerve stimulation as an adjunct to ultrasound-guided nerve blockade. This technique has been shown to have limited utility.[8] Positive motor response to nerve stimulation has not been shown to increase the success rate of a block and in one study 90% of patients without a motor response still had a successful block, which was defined as one that sufficed as sole anesthetic.[8]

The brachial plexus is often blocked at the supraclavicular level for procedures that will require anesthesia from the mid-humeral level down to the hand. 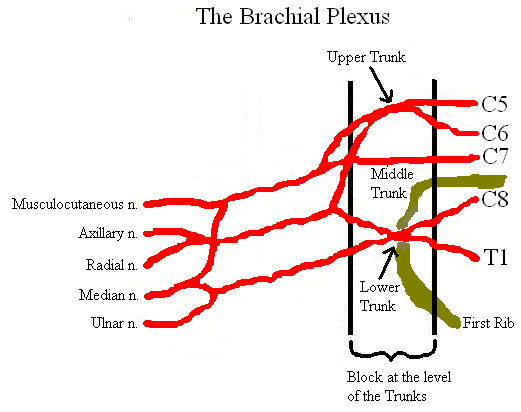 Position the patient supine with arm placed by their side with their head turned such that their face is looking away from the arm to be blocked.

Palpate the posterior border of the clavicular head of the sternocleidomastoid muscle at the level of the cricoid cartilage (C6). 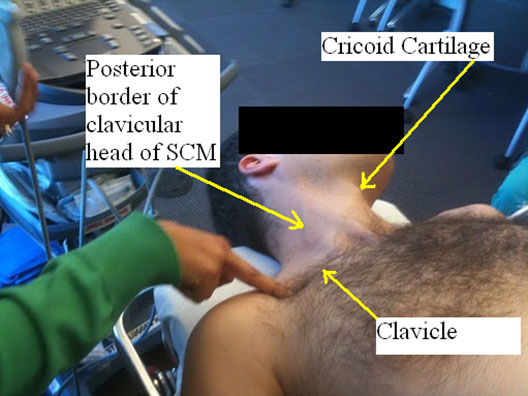 Now lightly sweep your fingers laterally until they fall into the interscalene groove. 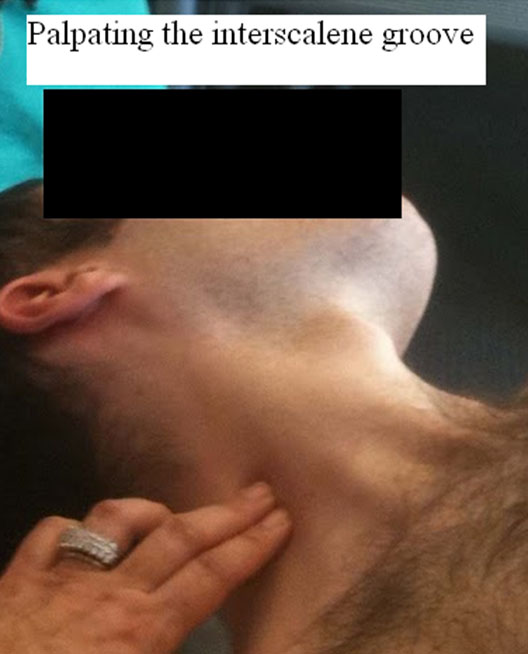 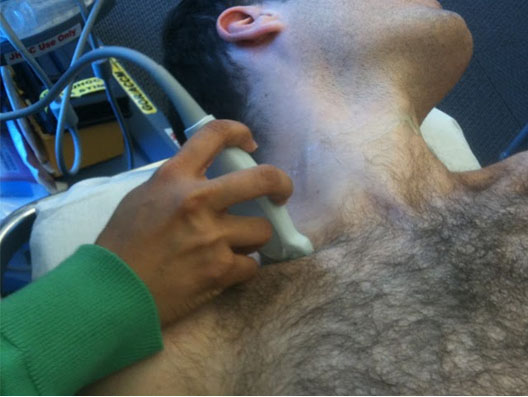 Figure 4. Ultrasound probe placed above the clavicle in the supraclavicular fossa 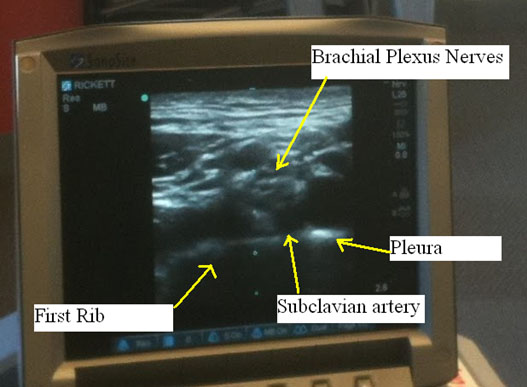 At this point it is important to note the skin-to-brachial plexus and skin-to-pleura distance on the ultrasound monitor. Keep these distances in mind to avoid giving the patient a pneumothorax.

After numbing the skin in the area of proposed needle insertion, insert your blocking needle along the lateral end of the ultrasound probe. Advance the needle along the long axis of the ultrasound probe in a lateral to medial direction watching it in real time as the needle approaches the brachial plexus. Continue to observe the depth of needle insertion keeping in mind the skin-to-brachial plexus and skin-to-pleura distances previously calculated. This is one block where continuous visualization of the needle tip is critical to avoid a pneumothorax given the close proximity of the brachial plexus to the apex of the lung.

If the needle tip is not clearly in view injecting small amounts of 5% dextrose can be useful. If the solution is injected but hydrodissection is not seen one must worry that the needle may be intravascular. Often clinicians will aim for the “pocket” formed by the first rib inferiorly and the subclavian artery both medial and superiorly. Injecting most of the local anesthetic in this area will help to ensure that the inferior trunk is anesthetized to provide anesthesia to the distal arm. If simultaneously using a nerve stimulator, aim for hand motor stimulation around 0.5 mA. One study found that a stimulating current of 0.2 mA or less is reliable to detect intraneural placement of the needle while a current between 0.2 mA and 0.5 mA could not rule out intraneural position.[9] Once the needle is in proper position start to inject local anesthetic and watch for hydro dissection around the target nerves. Most clinicians use a volume between 25 and 40 mL of local anesthetic for this block. The effective volume in 50% of patients has been shown to be 23 mL while the effective volume in 95% of patients has been shown to be 42 mL.[10]

With this approach the ultrasound probe is held in a more anterior-to-posterior angle than the traditional lateral-to-medial approach. It has the potential to provide better visualization of the brachial plexus as the plexus is located both lateral and posterior to the subclavian artery.

The supraclavicular block is a safe and simple technique for providing surgical or postoperative analgesia of the entire upper extremity from the level of the mid-humerus down to the hand. The introduction of ultrasound technology has greatly increased the popularity of the supraclavicular block as the ultrasound can be used to identify the brachial plexus, guide the needle into the plexus sheath, and evaluate the spread of local anesthetic while visually observing other important structures so as to avoid significant pneumothoraces and intravascular injection.