PECS I and PECS II Blocks

PECS blocks were first described by Blanco[1-2] in 2011.  A PECS block is a fascial plane block that provides analgesia to the upper anterior chest wall.  It has been used for analgesia after breast surgery. [1-3] It has also shown potential to provide analgesia for pacemaker insertion[4] and upper arm fistula surgery.[5]  It is an alternative to paravertebral blocks in patients receiving breast surgery.

The technique was initially described by Blanco.[1-2] The patient is placed in the supine position with the arm abducted. A high-frequency ultrasound probe is placed under the clavicle at the midclavicular line to locate the axillary artery and vein under the pectoralis major and minor muscles. The probe is then moved distally and laterally towards the axilla as you visualize the ribs.  Starting at the 1st rib, count until you reach the 3rd rib.  At the level of the 3rd and 4th ribs, you will be able to see three muscle layers: pectoral major, pectoralis minor, and serratus anterior muscles.

For the PECS II block, the needle is then advanced into the plane between the pectoralis minor and serratus muscles, and 20 ml of local anesthetic is injected watching for spread between the muscle layers under ultrasound guidance. 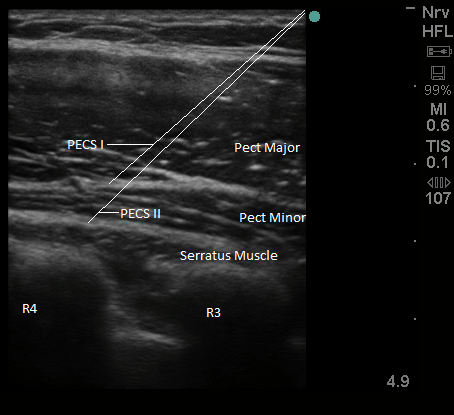 Most recently, Kulhari[8] compared PECS II block to thoracic paravertebral blocks performed at T3 in 40 patients undergoing modified radical mastectomy.  Both groups received blocks with 25 ml of ropivacaine 0.5% and had a morphine PCA for postoperative analgesia. Patients in the PECS group had decreased 24 morphine requirements, lower pain scores, and longer duration of analgesia.

PECS I/II blocks have become popular since first described.  It is a relatively easy to learn technique which appears to be a good choice for analgesia in patients undergoing breast surgery.  It is expected that more randomized trials will be published in the coming years, especially comparing the technique to paravertebral blocks.