Spinal cord stimulators (SCSs) have been shown to treat pain from failed back surgery syndrome, complex regional pain syndrome, neuropathy, refractory angina, and visceral abdominal and perineal pain. SCSs have been shown to improve quality of life and increase activities of daily living while also reducing long-term healthcare costs.1-4 Despite advancing technologies and techniques for placement, complications still occur. The most common issues are hardware-related such as lead migration, connection failure, and breakage.5 Less frequent problems include pain at the internal pulse generator (IPG) site and infections.6-7 Although usually minor, these complications impact patient satisfaction and expenses. The literature is limited on the risk factors and causes behind SCS malfunction and management approaches. We describe a case of SCS implantation in a patient with failed back surgery syndrome presenting with twiddler’s syndrome. Twiddler’s syndrome is a voluntary or involuntary manipulation of an implanted pulse generator that can result in migration of the leads causing malfunction of the device.

The patient is a 61-year-old female with lumbar stenosis and lower back pain with symptoms radiating into the lower extremities for which she underwent a L4-L5 laminectomy in 2010. She continued to have lower back pain with radiculopathy, unresponsive to conservative treatment, findings consistent with failed back surgery syndrome. Other medical history is notable for lupus, osteoarthritis, hypothyroidism, and obesity, for which she underwent a laparoscopic sleeve gastrectomy with a 40-pound weight loss. The patient had an SCS burst therapy trial and reported 90% subjective improvement in symptoms; a permanent SCS was implanted a month later.

The patient followed up at 3 and 6 months complaining of left lower extremity pain, requiring reprogramming with improvement of symptoms. At 10 months, she had x-rays done to evaluate for lead migration that showed lead shift from mid-T7 to the top of T8 in one lead and from mid-T7 to lower-T7 in the other lead. Reprogramming was again conducted, and the patient achieved relief. At 24 months post-implantation, the patient presented with “burning” and “shooting,” intermittent pain sensations over the IPG site, especially prominent when sitting or lying on the site. Imaging was obtained and revealed right lead migration distally with a coiled lead near the generator insertion site and possible fraying of the lead. The left lead appeared partially dislodged at the generator (Figure 1). Device interrogation revealed high impedances on a majority of the contacts (Figure 2). 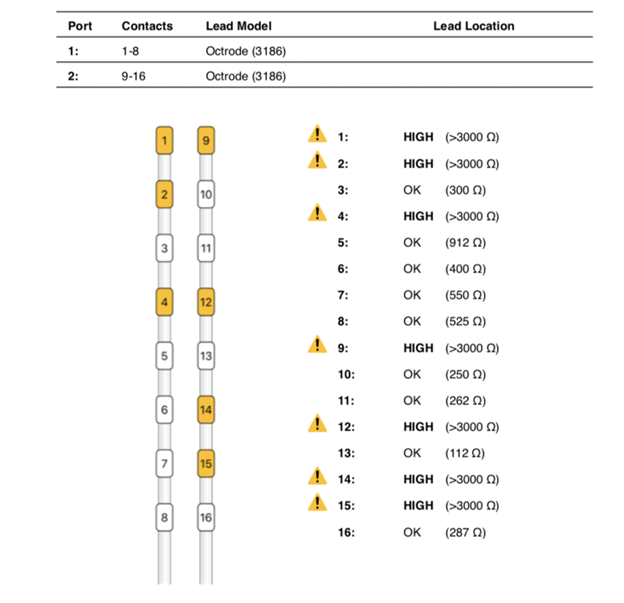 The device was explanted. The leads and generator were removed. During revision, the battery was seen to be intact, upright, and secured with a 2.0 silk suture. It appeared that the other 2.0 silk suture used for securing the IPG had been dislodged. When the device was removed, there was evidence of severe coiling in the leads without wire fraying. The leads in the epidural space were wavy as they approached the IPG site and became progressively twisted before coiling, prior to connecting into the IPG. Despite severe coiling, the leads were still intact entering the IPG (Figure 3).

Upon reviewing the patient’s medical chart, the patient had presented for other complaints to the emergency department in the span of the two years since implantation and had a series of computerized tomography scans of the chest, abdomen and pelvis showing evidence of the leads progressively coiling and battery flipping. She denied any traumas, changes in exercise regimens, or falls since her SCS surgery. Her only notable surgical history was a sleeve gastrectomy done 16 months after implantation, which resulted in a 40-pound weight loss.

Hardware failure continues to be one of the most common complications of SCS. A 20-year, 68-study literature review by Cameron identified lead migration as the most common cause with an incidence of 13.2%, followed by lead breakage with an incidence of 9.1%.4 Hardware failure contributed to about 25-30% of the causes for explantation. Even though pain was the most common reason for explantation, malfunctions such as lead migration, lead fracture and defects were other causes.8-10 In this case report, we describe an IPG with significant wire coiling and battery flipping, which appears to be an uncommon and possibly underrecognized, but important adverse event.

There are multiple possible explanations to consider when assessing how the wires had coiled and the battery had flipped. First, the technical aspects of how the battery was secured in the pocket must be explored. In this case, during revision surgery, the anchors securing the leads remained intact. One of the two silk sutures securing the IPG became dislodged. In this patient, when old imaging (from unrelated medical encounters during the timeframe after the device was implanted) was reviewed, it became evident that there was gradual coiling and flipping of the IPG.

Twiddler’s syndrome is an uncommon occurrence typically described in patients with implantable cardioverter-defibrillators, pacemakers, and deep brain stimulators in which deliberate or accidental device rotation results in lead and device issues. 11-12 The risk of twiddler’s syndrome may be higher in individuals with psychiatric comorbidities such as obsessive-compulsive disorder, anxiety, depression, young age or older age with changes in tissue integrity, dementia, obesity, female gender, cognitive dysfunction, and a pocket size larger than the implanted device.13-15 Twiddler’s syndrome has been rarely reported in cases of SCSs. Al-Mahfoudh described 3 cases.13 The patients ranged between 31-54 years of age. All three patients had BMIs over 30, were female, and had some degree of concurrent anxiety or depression. Two further cases were described by Son et al. in 2018, occurring at a rate of 1.08%.16 The patients were 63 and 74, and only one had a BMI greater than 30. Early recognition of those at risk for twiddling prior to the initiation of trialing and permanent device implantation may be helpful in preventing damage to the device or therapy failure. Considerations for screening could include psychological screening.

Substantial weight loss may also contribute to the risk of wire coiling and IPG flipping. In this case, the patient had undergone a sleeve gastrectomy 16 months after device implantation, which resulted in a 40-pound weight loss. Such weight loss may change pocket size and loosen structural components keeping important elements in place. Monitoring the IPG site in patients that are undergoing major weight loss is important.

Although in this case the final symptoms presented approximately 24 months after initial implantation, similar occurrences have been reported as early as 4 weeks post-surgery.13 Avoiding significant weight-bearing and vigorous exercise in the weeks following implantation is recommended to avoid hardware migration.

Clinicians must also be able to troubleshoot SCS issues as they arise. Hardware failures represent the most common complications. While many of these arise from the leads themselves, lead coiling and battery flipping also may contribute to device failure. Having appropriate follow-up intervals post-implantation along with checking impedances and obtaining imaging on a regular basis may help with early detection of impending device failure. 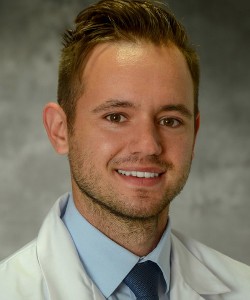 Thomas Bielawiec, MD, is an anesthesiology resident at the University of Chicago Department of Anesthesia and Critical Care, Chicago, IL. 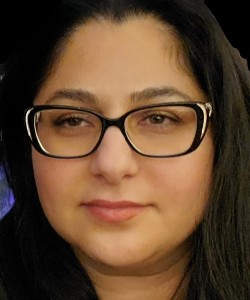 Dalia Elmofty, MD, is an associate professor at the University of Chicago Department of Anesthesia and Critical Care, Chicago, IL.