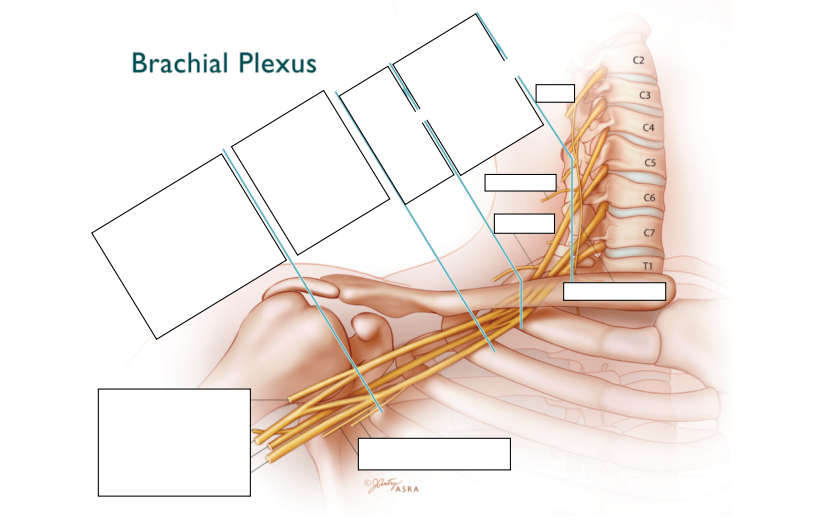 What in this patient’s history would help you decide between regional anesthesia vs. GA?

Which block would you choose? What are some considerations that will determine the choice of an upper extremity block?

Would the intercostobrachial nerve be covered by one of these brachial plexus blocks?

Would an intercostal brachial nerve block also be required for this surgery? Why might communication with the surgery team be important in determining if this block is also required?

A 79-year-old female presents for a left shoulder arthroplasty for which she will be admitted. She has a past medical history significant for right diaphragmatic paralysis s/p surgical resection of a bronchogenic carcinoma involving the phrenic nerve five years ago. The surgical team requests a block for the primary anesthetic and postoperative pain control.

If the surgeon asked if you could perform the block in a way that mitigated the risk of phrenic nerve block, what would you say?

If the patient instead has nerve compression causing right vocal cord paralysis, could a block be conducted for this surgical procedure?

What considerations should you take into account when deciding your anesthetic choice?

What additional block may be added to either a supraclavicular or infraclavicular approach to aid in coverage of the medial aspect of the upper arm? When would this be most relevant?

A supraclavicular block is placed preoperatively with special attention given to targeting the “corner pocket” to avoid ulnar sparing. The patient reports their arm is heavy and numb as you roll back to the OR. As the surgeons begin the procedure for AVF creation in the snuff box, the patient reports sharp pain to the incision. What is wrong and what can you do?

A 60-year-old female presents for carpal tunnel release under regional anesthesia. Her PMH is notable for median nerve dysfunction in her hand, type II diabetes, and a history of shoulder arthroplasty. She says she received a nerve block for her arthroplasty and found the sensation of having a “dead arm” profoundly unsettling. She says it provoked her anxiety and requests that you do not perform a nerve block. The surgeon does not feel comfortable with just using local.

Other than GA, what else could you offer?

As you consent this patient, what risks are you considering?

How is a Bier block placed and managed? What are the most important steps?

After placing the block, the surgeon begins the procedure, but the patient’s arm still is not numb. What may have gone wrong?

The surgery is successful but on deflating the cuff, the patient begins to complain of tingling in her lips. As you try to assess for other symptoms of LAST, she becomes agitated and says she is having a panic attack. What is wrong, how did it happen, and what do you do?