How I Do It: A Pathway for Total Knee Arthroplasty

Total knee arthroplasty (TKA) is a common surgery for advanced knee arthritis, and the procedure has been growing in frequency, particularly in communities with aging populations. As with many institutions, we have sought to create a regimen for postoperative analgesia that provides excellent pain control while simultaneously decreasing lower extremity weakness, diminishing the risk of postoperative falls, and meeting the goals of physical therapy. In this article, we will describe our current total joint pathway for TKAs.

We have sought to create a regimen for postoperative analgesia that provides excellent pain control while simultaneously decreasing lower extremity weakness, diminishing the risk of postoperative falls, and meeting the goals of physical therapy.

TKA patients frequently present with significant comorbidities, such as diabetes (27%), hypertension (73%), pulmonary disease (21%), congestive heart failure (4%), and other chronic conditions. In addition, 61% of patients presenting for TKA at the University of Illinois Hospital are obese or morbidly obese. These comorbidities can frequently result in a prolonged recovery period following surgery. It is therefore imperative that any perioperative analgesic pathway is able to provide safe, effective, and prolonged anesthesia.

Two hours prior to presenting to the operating room, patients are asked to drink a 300 mL complex carbohydrate solution. This oral solution is withheld in the setting of delayed gastric emptying or symptomatic reflux disease. In the preoperative holding area, patients receive an oral pain pack which consists of acetaminophen 1000 mg, celecoxib 200 mg, and gabapentin 400 mg. Celecoxib is not given to patients with a history of renal insufficiency (creatinine > 1.5) or allergy (sulfa or celecoxib). Patients with any evidence of liver disease do not receive acetaminophen.

Figure 1: Adductor canal block with the needle lateral to the femoral artery underneath the sartorius muscle.

Regional anesthesia procedures are generally performed in the preoperative area. All patients have the option of receiving either combined spinal-epidural or general anesthesia as the primary anesthetic. For the combined spinal-epidural, 2-3 mL of 0.5% isobaric bupivacaine is the typical dose for the spinal component.  An epidural remains in place in case an extended duration of anesthesia is required to complete the surgical procedure. The epidural may be dosed with 2% lidocaine or 0.25% bupivacaine as needed in doses of 3-5 mL to extend the duration of neuraxial anesthesia. Generally, a waning spinal anesthetic is manifested by obvious patient discomfort, tachycardia, or hypertension.

A regional analgesia technique is a consistent component of the multimodal postoperative pain management strategy. Our approach to postoperative regional analgesia has evolved over the past few years as an increased emphasis has been placed on efforts to expedite mobility and recovery. Regional analgesia techniques are usually performed prior to surgery. Prior to February 2018, femoral nerve catheters were part of the postoperative pain management regimen. Femoral nerve catheters were placed under ultrasound guidance and dosed with 10-20 mL of lidocaine 2% or bupivacaine 0.25%. The nerve block catheters were infused with a solution of 0.1% bupivacaine at a rate of 6 mL/hr with a 4 mL bolus every 30 minutes. Initially, the femoral nerve block catheters remained in place until day 2 (POD#2) to extend the duration of analgesia. However, to facilitate early physical therapy, the nerve catheter was frequently discontinued on POD#1 following multidisciplinary consultations with orthopedics and physical therapy.  Despite this transition, only a small fraction of patients achieved the ability to dangle and participate with physical therapy on POD#0. 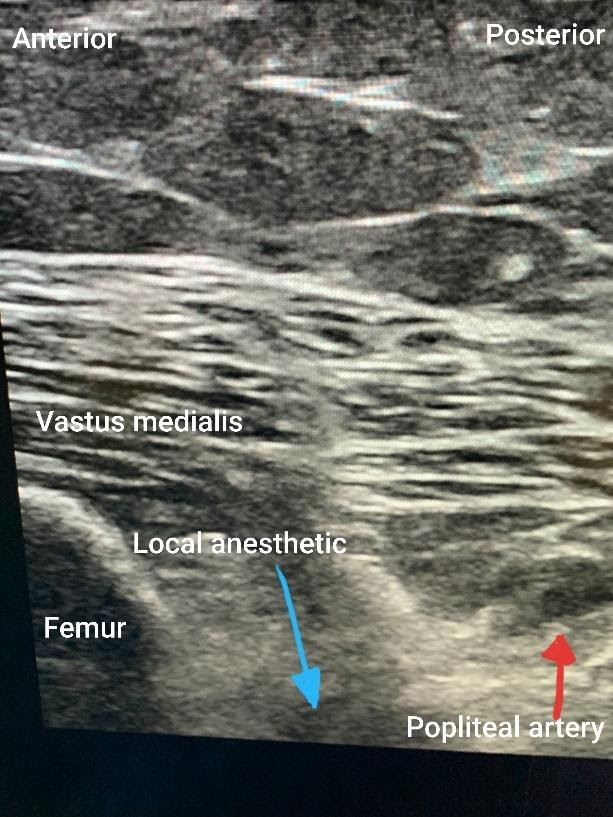 Figure 2: iPACK block with local anesthetic deposited between the femur and the popliteal artery in an out-of-plane approach.

In an attempt to facilitate earlier mobilization with physical therapy, the pain management pathway for TKA has now migrated away from femoral nerve blocks/catheters and towards adductor canal blocks. The hope was to spare quadriceps motor function and optimize patient mobility on POD#0. Our current practice is to offer single-shot adductor canal blocks and infiltration between popliteal artery and capsule of the knee (iPACK) blocks for postoperative pain control. Ultrasound-guided subsartorial saphenous nerve block/adductor canal blocks are performed by identifying the femoral artery beneath the sartorius muscle using a high-frequency linear transducer. Using either an in-plane or out-of-plane needle approach, local anesthetic is deposited lateral to the artery. The typical volume of injectate used for the subsartorial saphenous nerve block/adductor canal block is 20-30 mL of 0.25% bupivacaine, whereas 10-20 mL of the same local anesthetic is used for the iPACK block with a maximum volume of 40 mL.

Figures 1 and 2 demonstrate the sonoanatomy relevant to the performance of adductor canal and iPACK blocks. Figure 1 shows an in-plane subsartorial adductor canal block performed with the patient in the supine position and a linear ultrasound probe scanning at the mid-thigh. The femoral artery is visualized beneath the sartorius muscle. Local anesthetic is injected lateral to the artery in the expected location of the saphenous nerve and the nerve to the vastus medialis. Figure 2 shows an out-of-plane iPACK block, with the patient remaining in the supine position and a linear ultrasound scanning just above the knee with the leg externally rotated. On the left side of the screen, the femur is visualized, and on the right is the popliteal artery. Local anesthetic is deposited between these two structures.

Epidural catheters are dosed judiciously with local anesthetic near the end of surgery as not to limit patient ambulation on POD#0. Postoperatively, the epidural is removed prior to discharge from the recovery area. Patients are seen by the physical therapist on the day of their surgery, either in the recovery area or the orthopedics floor. Oral analgesics include acetaminophen 650 mg every 6 hours, celecoxib 200 mg every 12 hours, gabapentin 300 mg nightly, oxycodone CR 10 mg every 12 hours, as well as oxycodone IR and tramadol as needed. This multimodal pain regimen is continued until at least POD#2.

The ability to ambulate before and after the transition from femoral nerve block catheter to single shot adductor canal blocks were audited as part of a quality improvement project. The significant results of this transition are presented in Table 1.

Mobility refers to the percentage of patients who are able to participate in physical therapy the afternoon or evening following surgery, either by dangling or ambulating. The data above shows that ability to mobilize and participate in physical therapy on POD#0 increased by a large margin after our transition in regional technique. The ability to ambulate on POD#1 did not change significantly.  Previously, femoral nerve catheters were removed early on the morning of POD#1, therefore, patients from both time periods likely had very little residual nerve blockade at the time of physical therapy evaluation, which would typically have been done later in the day.

The workflow of our regional service necessitates that most of our blocks for TKA patients be performed prior to surgery. Therefore, TKA patients do not receive continuous adductor canal or iPACK blocks, as these catheters would be in close proximity to the surgical field. There is therefore no ability to prolong the duration of the regional block beyond what is allowed by a single shot. However, patients appear to benefit from this regimen and have increased mobility on POD#1, as indicated by the data above.

Many institutions have shifted away from femoral nerve blocks and towards adductor canal blocks or saphenous nerve blocks, as we recently have. Previously published anatomical studies have identified the saphenous nerve and nerve to the vastus medialis as consistently located in the adductor canal.[1] Both of these nerves provide sensory innervation to the anteromedial joint capsule, and the nerve to the vastus medialis provides some motor function as well. Randomized controlled trials have demonstrated statistically significant increases in quadriceps strength for patients in severe pain after TKA.[2] A recent meta-analysis with 12 randomized controlled trials and 969 patients concluded that adductor canal blocks, whether single-shot or continuous, can achieve better analgesia compared to femoral nerve blocks while allowing for preserved quadriceps strength.[3] Further studies are needed to show whether adductor canal blocks can consistently result in a decreased time to ambulation, greater mobility, and shorter length of stay when compared to femoral nerve blocks. However, a good multimodal analgesic regimen is likely required as a complement to any regional anesthesia procedure.

Our evolving total joint pathway has allowed patients to mobilize and work with physical therapists more rapidly following TKA over the past few years. We will continue our efforts to promote faster recovery and greater patient comfort.