A Primer for Pain Physicians on Gadolinium-Based Contrast Agents: Caution Is Advised

Gadolinium-based contrast agents (GBCAs) are approved by the Food and Drug Administration (FDA) for intravenous use during MRI examinations.[1] In the field of interventional pain medicine, GBCAs have been suggested as an off label alternative to iodine-based contrast agents in patients with a documented iodine allergy. [2,3] Recorded interventional pain procedures for which GBCAs have been used as a visualization agent include discograms, epidural steroid injections, nerve blocks, facet injections, minimally invasive lumbar decompression, and intrathecal pump studies. [2,3]

Intrathecal gadolinium poses a serious risk of neurotoxicity, even at small doses.

When used for FDA-approved indications, GBCAs are considered relatively safe, with known potential adverse events including acute hypersensitivity, physiologic reactions (eg, pain at the injection site, nausea, headache), nephrogenic systemic fibrosis in patients with impaired renal function, encephalopathy, gadolinium storage condition, and gadolinium deposition disease. [4] However, less attention has been given to the risks associated with using GBCAs off-label in interventional pain procedures. Both intentional and unintentional delivery of a GBCA into the intrathecal space pose a risk of severe acute neurotoxicity. Acute toxicity with intrathecal administration may include neurologic and cardiovascular sequelae of seizures, confusion, nausea, tachycardia, fever, respiratory decline, and ultimately death (Table 1). [5]

*GBCA – gadolinium-based contrast agent. In this column, volume of GBCA administered is provided alongside the estimated concentration of gadolinium per gram of brain. Calculated using 1400 g as the average weight of the human brain in order to be consistent with calculations from Arlt et al.[24]
**Intrathecal administration was unintentional.
Ψ Unintentional intrathecal administration was due to drug error.
Φ Adapted from Provenzano et al. 2019[5]

To understand the neurological risks of intrathecal gadolinium, it is critical to understand gadolinium’s chemistry, pharmacology, and proposed mechanisms of toxicity. Gadolinium is toxic in its free, ionic state (Gd3+).[6] In an effort to limit the toxicity of free gadolinium, the gadolinium ion is bound to a chelating ligand.[7] These chelating ligands are characterized based on their shape as either linear or macrocyclic. GBCAs can be further classified as ionic or nonionic depending on if the compound is electrically neutral (nonionic) or charged (ionic). Macrocyclic GBCAs form a tight “cage” around the gadolinium ion, making them more stable (less likely to release the gadolinium ion) than linear GBCAs. Ionic GBCAs have a higher thermodynamic stability constant (stronger bond between the gadolinium ion and chelating ligand) than nonionic GBCAs. [1] There are nine different brands of GBCAs: gadofosveset trisodium, gadoxetate disodium, gadopentetate dimeglumine, and gadobenate dimeglumine (linear ionic); gadodiamide and gadoversetamide (linear nonionic); gadoterate meglumine (macrocyclic ionic); gadobutrol and gadoteridol (macrocyclic nonionic) (Table 2). The prescribing information from eight out of the nine brands mention the risk of serious neurological adverse events after GBCA administration. Of these, gadodiamide is the only brand that mentions the neurological risks of intrathecal administration, and its prescribing information specifically states that gadodiamide is not to be used intrathecally.

There have been several proposed mechanisms for acute gadolinium-induced neurotoxicity. Feng et al.[9] found that gadolinium exposure quickly led to disruption of mitochondrial function in rat cortical neurons. Mitochondrial dysfunction resulted in an accumulation of reactive oxygen species, which inhibited cellular function and induced apoptosis. Xia et al.[10] also studied gadolinium neurotoxicity in rat cortical neurons and demonstrated that oxidative stress from mitochondrial disruption led to strain in the endoplasmic reticulum. Alterations in the endoplasmic reticulum resulted in the activation of the apoptotic pathway. In another study, Feng et al.[11] observed dramatic extracellular calcium ion influx in astrocytes after gadolinium exposure. Elevated calcium levels may play an important role in apoptosis. Gadolinium disrupts multiple calcium-dependent pathways since its ionic radius is similar in size to calcium, allowing it to compete with calcium in vivo. Gadolinium has been shown to block voltage-gated calcium channels, inhibit calcium-activated enzymes, and function as an agonist in calcium receptors. These qualities give gadolinium a wide range of detrimental effects, from mitochondrial disruption and oxidative stress, to inhibition of muscle contraction and nerve signal transmission.[8]

Acute intrathecal gadolinium-induced neurotoxicity has been demonstrated in multiple animal models. Ray et al.[12] injected gadopentetate dimeglumine into the lateral ventricles of rats. Dose-dependent neurotoxicity was seen with symptoms beginning at gadolinium concentrations of 5 μmol/g brain. Affected rats demonstrated behavioral changes and focal lesions in the thalamus, brain stem, and spinal cord. No evidence of neurological decline was observed in rats that received gadolinium concentrations of 2.5 or 3.3 μmol/g brain. In a second study, Ray et al. [13] performed a similar experiment, this time including the GBCA gadodiamide. Once again, dose-dependent neurotoxicity was seen, with morphological changes beginning at 1.25 μmol/g brain and behavioral changes beginning at 2.5 μmol/g brain. Toney et al. found that 2.5 μmol/g brain intrathecal gadopentetate dimeglumine caused no significant signs of neurotoxicity in rats. [14] However, documented histological changes were seen including gliosis and inflammation. 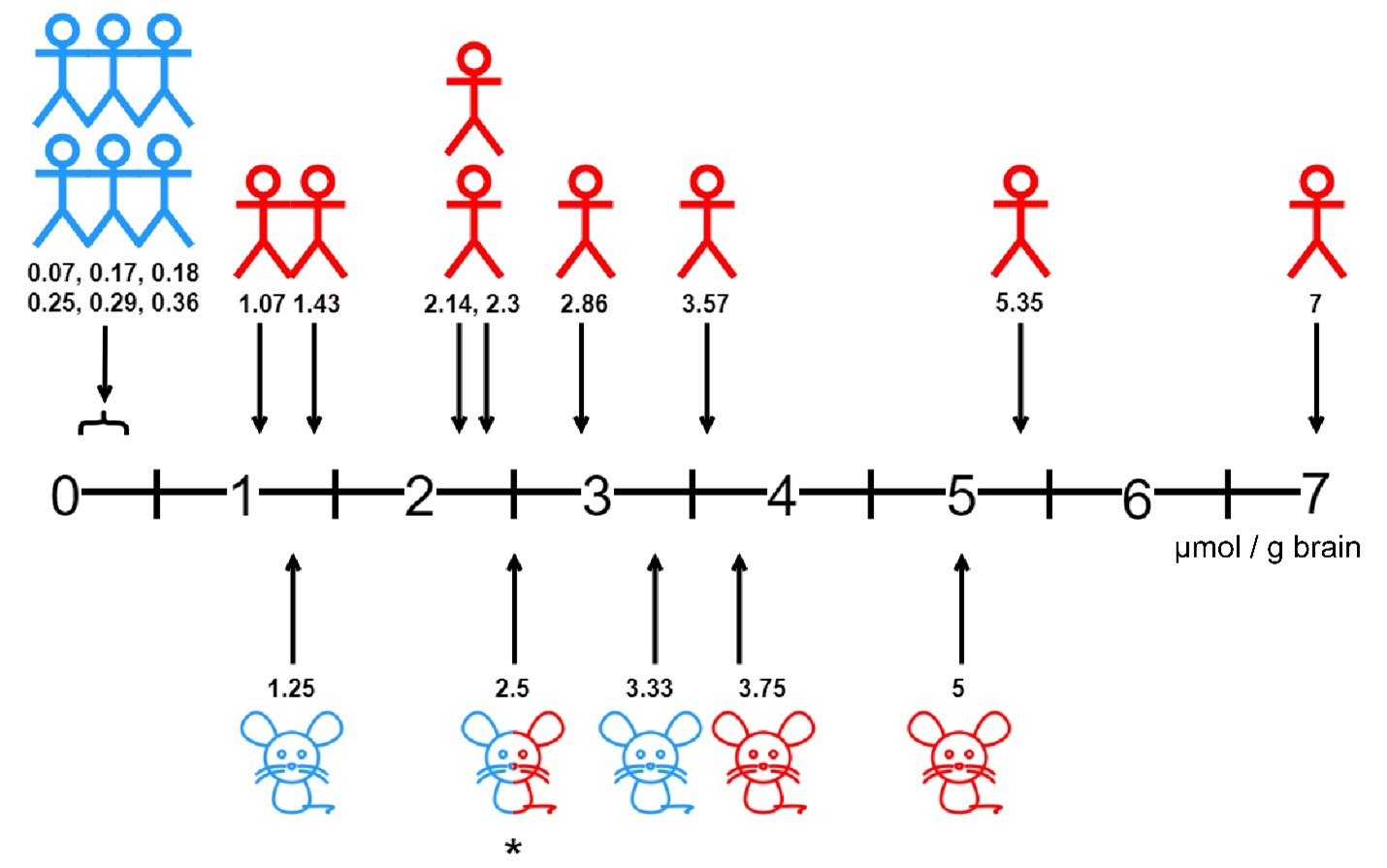 Specific volumes and dose limits for GBCAs have been suggested as viable visualization alternatives in interventional pain procedures when there is the possibility of inadvertent or deliberate intrathecal administration. [3,22]  First, we will remind the reader that the administration of a GBCA via routes other than intravenous is an off label use and that significant nervous system-related warnings are listed in the prescribing information. [5] Second, specific formulations of GBCAs have differing chelating agents and concentrations of gadolinium and thus the toxicity profile of one type is not directly applicable to another. When looking at the limited published clinical reports of acute GBCA neurotoxicity to date, physicians may desire to stay below a gadolinium dose of 1 μmol/g brain (ie, theoretical number based on case reports suggesting neurological risks). Based on a theoretical dose limit of 1 μmol/g brain, restricted GBCA volumes based on the GBCA’s gadolinium molar concentration would be feasible. GBCA volume limits would range between 1.4 mL (1 mol/L of gadolinium) to 5.6 ml (0.25 mol/L of gadolinium). The relative radiographic conspicuity of a GBCA is directly correlated to the gadolinium concentration of the agent selected.[23] Gadolinium-based contrast agents that have a higher gadolinium concentration are more visible under fluoroscopic imaging, but lower volumes would have to be used to stay below the theoretical neurotoxic intrathecal administration level.

Intrathecal gadolinium poses a serious risk of neurotoxicity, even at small doses. GBCAs are not FDA approved for use in the intrathecal or epidural spaces. Furthermore, if GBCAs are being considered as an alternative to iodine-based contrast agents for visualization in interventional pain procedures, one must remember that this is an off-label use with significant risk of acute neurotoxicity when intrathecal administration occurs intentionally or unintentionally. Since different types of GBCA have different chelating agents and concentrations of gadolinium, the toxicity profile of one type is not directly applicable to another. Extensive research is required to better understand the risk of GBCA neurotoxicity. Until further basic and clinical research is performed, GBCAs should not be considered a safe and viable alternative to iodine-based contrast in neuraxial interventional pain procedures for which there is the risk of intrathecal administration.