How I Do It: Sphenopalatine Ganglion Block and Radiofrequency Ablation

The sphenopalatine ganglion (SPG), also known as the pterygopalatine ganglion or Meckel’s ganglion, is an extracranial parasympathetic ganglion that lies in an inverted pyramidal space called the pterygopalatine fossa. It is the largest ganglion outside of the calvarium containing sympathetic, parasympathetic, and sensory neurons.[1] Three main neural pathways intersect within the SPG. The sensory pathway accounts for a generous portion of the sensory innervation to the face and neck. The postganglionic sympathetic pathway arises from the superior cervical ganglion and courses through the calvarium as the deep petrosal nerve. The deep petrosal nerve combines with the parasympathetic greater petrosal nerve immediately before the foramen lacerum to form the nerve of the pterygoid canal, or Vidian’s Nerve. These sympathetic neurons coursing through the SPG provide vasoconstrictive innervation to the nasal cavity, upper pharynx, and palate.[2] The parasympathetic pathway originates in the superior salivatory nucleus of the pons. The preganglionic parasympathetic neurons course through the skull as the nervus intermedius, the geniculate nucleus, the greater petrosal nerve, and Vidian’s nerve before synapsing within the SPG. The postganglionic neurons provide secretomotor innervation to the lacrimal, nasal, palatine, and pharyngeal glands.[2]

The sphenopalatine ganglion is the largest ganglion outside of the calvarium containing sympathetic, parasympathetic, and sensory neurons.

Success with sphenopalatine ganglion blockade has been demonstrated in the treatment of chronic and episodic cluster headache. The mechanism of this success likely includes interruption of parasympathetic outflow from the superior salivary nucleus.

Clinical improvements have been demonstrated among patients with atypical facial pain, trigeminal neuralgia, and migraine headaches. In some cases, refractory pain has been improved in patients who have failed numerous noninvasive modalities.

Transnasal approach: The intranasal approach often is used as a diagnostic tool prior to percutaneous approaches or as an abortive treatment for acute symptoms. The technique utilizes a pledget soaked with local anesthetic that is advanced intranasally along the superior aspect of the middle turbinate overlying the SPG. There are also specialized local anesthetic delivery systems, which attempt to address anatomical limitations with flexible sheaths and angled catheters.[3,4] Advantages to the transnasal approach are its technical simplicity, short procedure times, and low overall risks. Risks are mostly limited to epistaxis and infection.[5, 6]

Transoral approach: Dentists are the primary users of this approach. The SPG is reached by a needle passing through the posterior end of the hard palate and the greater palatine foramen. This method can be technically challenging, and deposition of local anesthetic can be unpredictable.[5, 7]

Percutaneous infrazygomatic approach: Interventional pain physicians commonly use this approach, and it is the author’s preferred method. This technique is performed percutaneously under fluoroscopic guidance. It allows direct administration of local anesthetic to the SPG rather than diffusion across mucous membranes as seen in the intranasal approach. Fluoroscopic placement also allows subsequent radiofrequency ablation (RFA) of the SPG if temporary relief is achieved with the block. 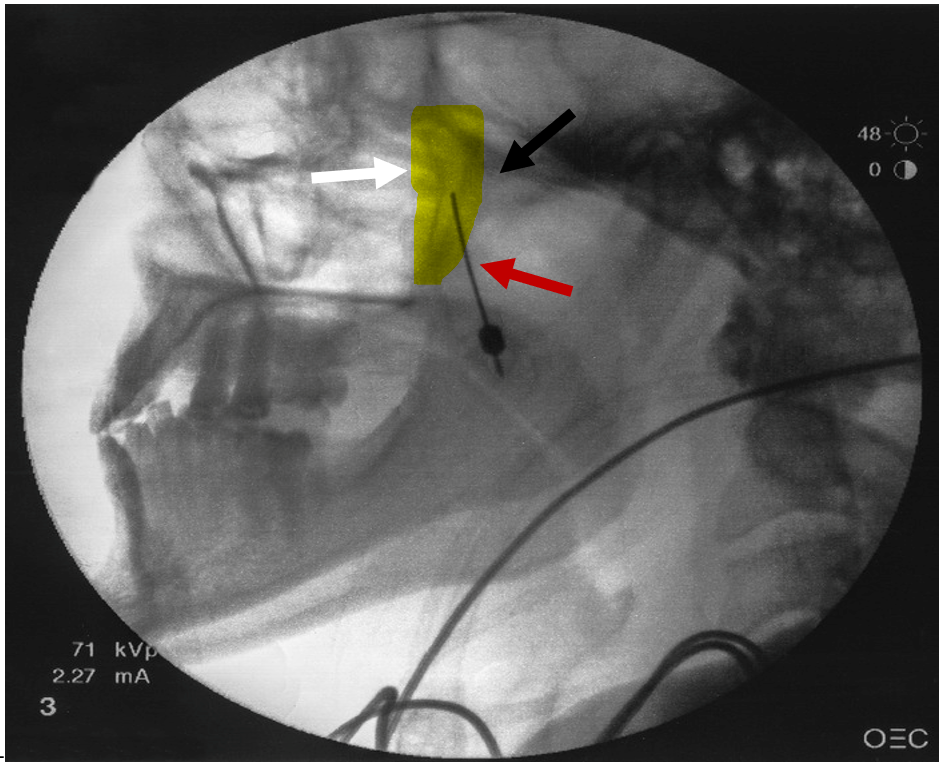 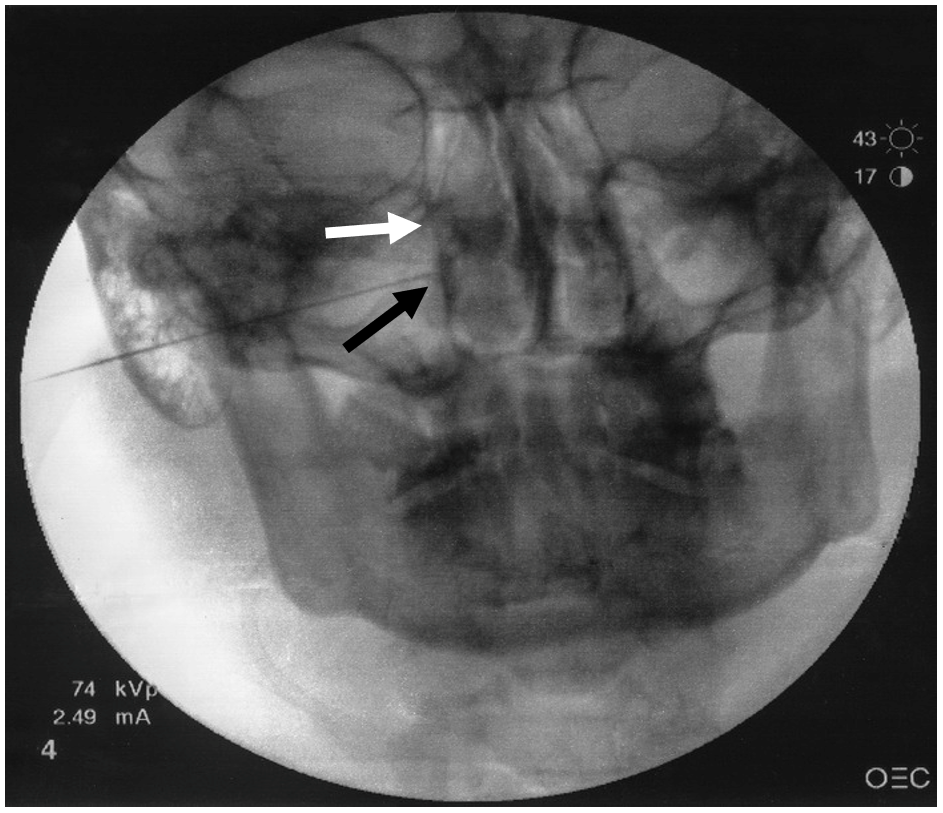 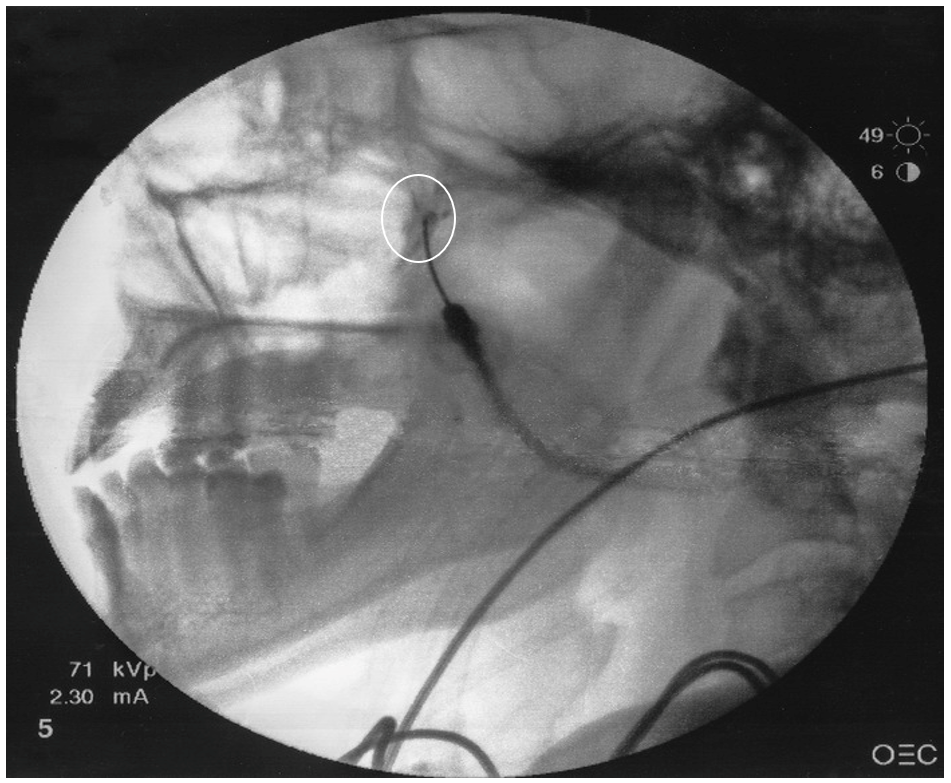 Radiofrequency Ablation of the SPG

For patients who responded favorably to SPG blocks, RFA can be performed. This can potentially provide longer-lasting pain relief for patients with conditions such as intractable cluster headaches.[6]

RFA of the SPG can result in temporary or, in rare cases, permanent hypoesthesia or dysesthesia of the palate, maxilla, or posterior pharynx. Reflex bradycardia has been reported during radiofrequency lesioning. This could be explained by the rich parasympathetic connections within the SPG.[8] Pulsed radiofrequency may be a safer method to avoid these effects; however, there are limited studies regarding its efficacy.[9,10]

The infrazygomatic technique can be modified to perform RFA as follows: