How I Do It: Hip Radiofrequency Ablation

Hip joint pain affects 11% of the population.[1] Groin pain, with radiation to the buttocks or upper-outer thigh, is the most common symptomatic complaint from these patients, and often the pain is due to osteoarthritis of the hip.

Several manuscripts have detailed the anatomy of the innervation of the hip joint; Locher et al.[2] published perhaps the first well-written manuscript for understanding innervation from the obturator nerve for purposes of ablation. In this study, 14 cadaver hip joints were studied; the location of the articular branch of the obturator nerve was visualized, and a cartoon was made to demonstrate the location of these nerve projections, along with a prospective radiofrequency ablation target zone. After that dissection, Tinnirello et al. were able to adopt a prior procedure (Kawaguchi et al) to modernize the radiofrequency ablation of the hip joint procedure.[3,4]  In this procedure, the obturator articular branch was blocked and ablated at the inferior junction of the ischium and pubis, the so-called “acetabular notch” or “acetabular incisura.” The femoral articular branch was blocked and ablated just below the anterior inferior iliac spine (Figure 1). 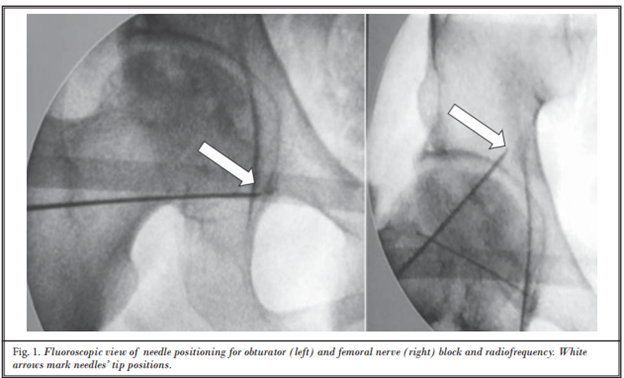 The above history certainly leaves out many important scientists who paved the way toward performing this procedure. But, ultimately, all of that work led to the seminal work by Short et al,[5] who completed the most thorough cadaveric dissection in terms of identifying anatomic landmarks specifically for the purpose of denervating the anterior hip joint. This manuscript confirmed that the acetabular notch and the anterior inferior iliac spine are the most important targets for denervation of the anterior hip joint and also added the iliopubic eminence as a possible target for the accessory obturator nerve.  This manuscript also suggested ultrasonographic methods to gain access to these targets.

Based on much of this work, Dr. Kapural’s team published the most recent data and updated method of performing this procedure, and his methodology is the one that I continue to use. Perhaps the most important part of his manuscript is the use of cooled radiofrequency ablation.[6] This allows for creating a larger lesion with forgiveness for not being parallel to the nerve itself, as heat emanates directly from the tip in addition to circumferentially around the active portion of the needle. Dr. Kapural used a combination of ultrasound and fluoroscopy for final needle positioning (Figure 2).  Ultimately, a modified version of this technique is the one that I currently use to perform the ablation. I have outlined these steps below: 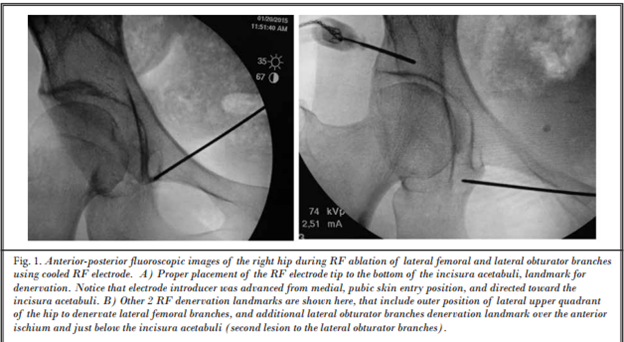 Future work is needed to identify posterior hip innervation landmarks for prospective denervation. Previous studies have demonstrated that the posterior hip capsule is innervated, potentially, by the sciatic nerve, the superior gluteal nerve, and the nerve to quadratus femoris. Perhaps more pressingly, there are currently no controlled trials demonstrating efficacy of this procedure. It is time for sham-controlled trials to determine the true efficacy of hip articular branch radiofrequency ablation.