How I Do It: Ultrasound-Guided Injection for the Shoulder (Part 1)

Shoulder pain is very common in the general population. It has been estimated that one in five individuals will suffer shoulder pain during his/her lifetime.[1] It is responsible for 16% of all musculoskeletal complaints in the primary care setting[2] and is only second to low back pain as the most common musculoskeletal ailment in general practice.[3]

In most patients, chronic shoulder disorder can initially be managed conservatively with multimodal therapy consisting of activity modification, physical therapy, medications, and corticosteroid injections.[4]  This two-part series will describe ultrasound-guided injections for the long head of biceps tendon (LHB), acromioclavicular joint (ACJ), subacromial subdeltoid bursa, and glenohumeral joint with LHB and ACJ injections covered in this article. A comprehensive review has recently been published on this subject for reference.[5,6]

The proximal part of LHB tendon is intra-articular (extrasynovial) and arises from the supraglenoid tubercle and the superior labrum. The tendon exits the joint within the bicipital groove, where an extension of the synovial lining of the GHJ invests the LHB tendon down to approximately 3-4 cm beyond the distal end of the groove. The LHB tendon is covered by the transverse humeral ligament and accompanied by the ascending branch of the anterior circumflex artery. The rotator cuff interval (RCI) is a triangular space that occupies the area between the subscapularis (SSC) and supraspinatus (SS) tendons and the base of the coracoid process. It is a space where the GHJ synovial lining extends around the biceps tendon and where the arthroscope enters the GHJ to avoid damaging the cuff tendons. Thus, this is an entry site by which an interventional pain physician can access the GHJ (Figs. 1A,B). The RCI is roofed by the rotator interval capsule, which is principally made up of the coracohumeral ligament (CHL). The RCI contains the tendon of the LHB tendon and the superior glenohumeral ligament (SGHL).

Figure 1. A) Anterosuperior view showing the rotator cuff interval, which is a triangular space between the tendons of subscapularis (anterior) and supraspinatus (posterior) muscles, and the base of the coracoid process. The roof is the coracohumeral ligament (ghosted) and the contents are the long head of biceps tendon (blue) and superior glenohumeral ligament (green). B) Cut out of the rotator cuff interval to show the content. The superior glenohumeral ligament (SGHL), a focal thickening of the glenohumeral joint capsule, runs anterior to the tendon of the long head of biceps (LHB) initially (position a). The SGHL maintains a close relationship with the LHB and subsequently inserts into a small depression above the lesser tuberosity (position b), contributing to the biceps reflection pulley (position c) to prevent the dislocation of the LHB. Reprinted with permission from http://usra.ca.

The patient is positioned sitting with back support and the hand supinated (“Give me your money gesture”). Place a high frequency (6-13 MHz) linear ultrasound probe over the bicipital groove (surface landmark halfway between the clavicle and anterior axillary fold). The LHB is seen as either a hyperechoic or a hypoechoic structure (anisotropy) between the greater and lesser tuberosity covered by transverse humeral ligament (Figs. 2A,B). A Doppler scan is then performed to reveal the ascending branch of the anterior circumflex artery (Fig. 2C). Doppler may also reveal increased vascularity of the tendon due to inflammation.

My preference is to use a 25 gauge 1.5 inch needle. The injectate is 2-4 mL of 0.25% bupivacaine including 20-40 mg methylprednisolone acetate and the approach is either in-plane or out-of-plane. The target is the synovial sheath. Thus a successful injection should reveal the injectate surrounding the tendon. If the tendon swells up during injection, injection should stop as it signifies intratendinous injection, and the needle should be repositioned. 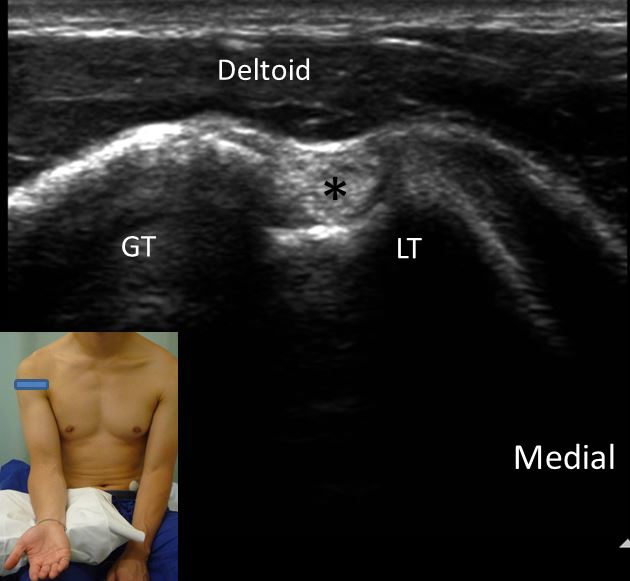 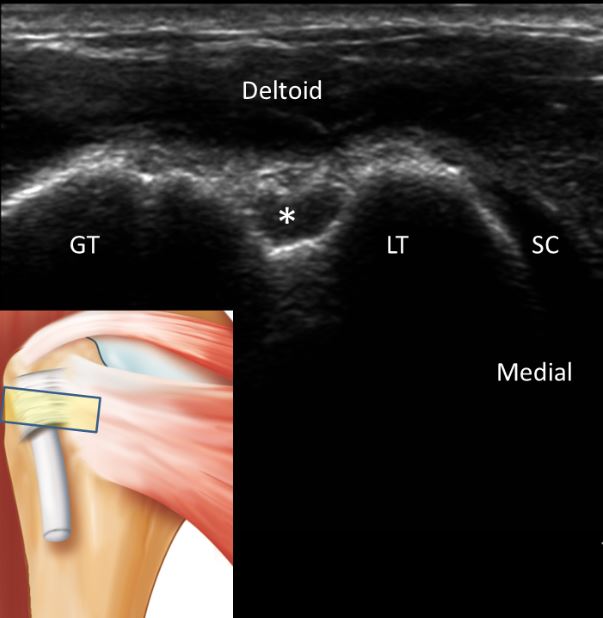 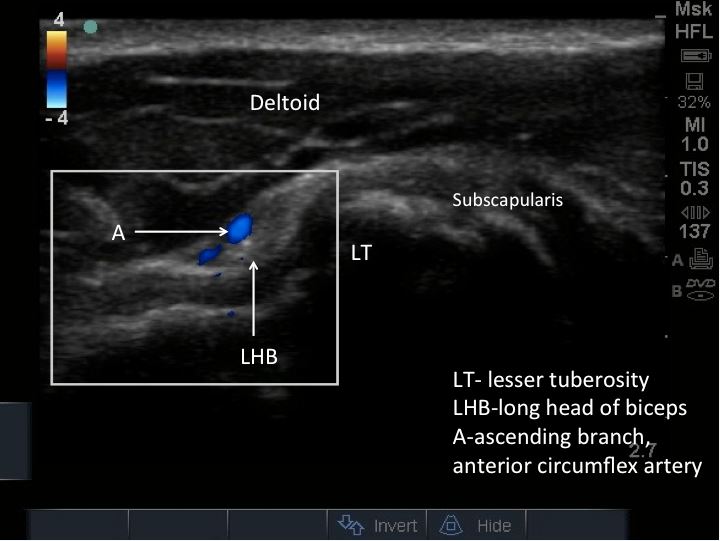 Primary tendinitis (in the absence of other shoulder pathology) is rare. Biceps tendon disease can be divided into tendinitis and tenosynovitis. The latter refers to an inflamed tendon sheath with the tendon in a relatively normal shape and is more responsive to non-operative management including steroid injection. However, tendinitis is more recalcitrant to conservative therapy.

The ACJ injection is commonly used as a diagnostic test to localize the source of pain in ACJ injury.[5,6] The main therapeutic indication for ACJ injection is arthritis (post-traumatic and osteoarthritis). Although the radiological evidence of osteoarthritis in ACJ is in the range of 50-60%, the prevalence of clinically symptomatic ACJ osteoarthritis is lower.[9] In contrast, arthritis following trauma to ACJ is more common due to the frequency of injury to this vulnerable joint.[10] 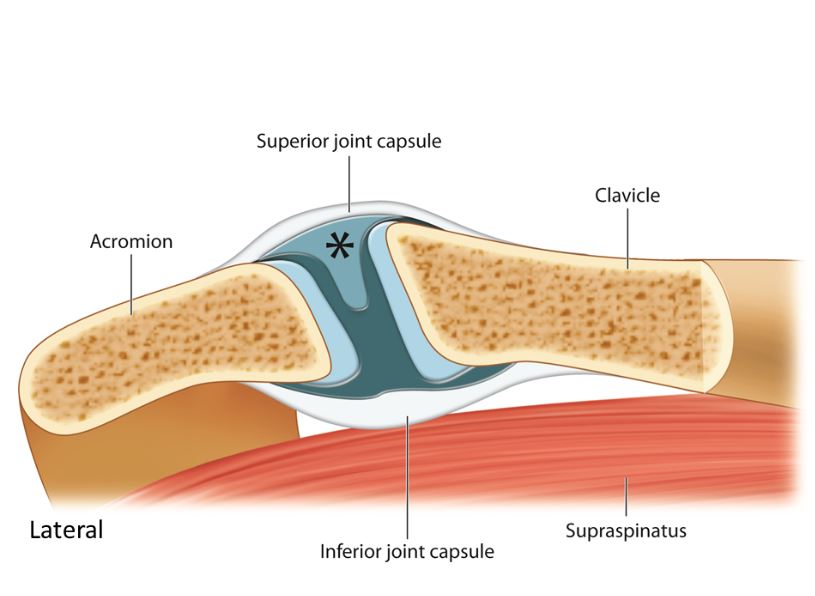 Figure 3. The acromioclavicular joint is a synovial joint with the articular surfaces separated by a wedge-shaped fibrocartilaginous disc (*). The inferior surface of the joint is in direct contact with the subacromial bursa and supraspinatus muscle and may play a role in the development of the impingement syndrome. Reprinted with permission from http://usra.ca.

The ACJ is a diarthrodial joint located between the concave medial end of the acromion and the convex lateral end of the clavicle, with dual neural innervation from both the suprascapular nerve and the lateral pectoral nerve (Fig. 3). It has limited range of motion, primarily rotation and translation in the anterior-posterior and the superior-inferior planes. The articular surfaces are made up of hyaline cartilage and are separated by a wedge-shaped fibrocartilaginous disk either partly or completely. By early adulthood, the disk is usually little more than a fibrocartilage remnant. The ACJ is stabilized both by static and dynamic stabilizers. Static stabilizers include the acromioclavicular ligaments (superior, inferior, anterior, and posterior), the coracoclavicular ligaments (trapezoid and conoid), and the coracoacromial ligament. Dynamic stabilizers include the deltoid and trapezius muscles.

The patient is positioned sitting or supine with arm neutral because the deep joint space is the widest in this arm positon.[11] A high frequency linear array probe (6-13 MHz) is used for this procedure. The initial scan is obtained with the probe over the joint in the coronal plane (medial part of probe in line with clavicle initially). The probe is then moved anterior-posterior to obtain the best view of the ACJ (hyperechoic ends of acromion, distal clavicle, fibrocartilginous disk, superior joint capsule. 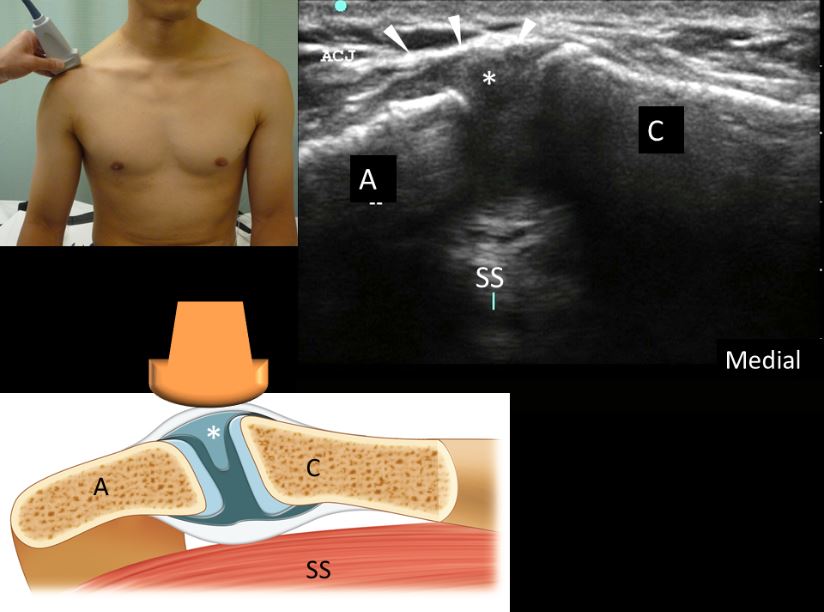 Because the target is superficial, a 25 gauge 1.5 inch needle will be sufficient. The volume of injectate is 1-2 mL of 0.25% bupivacaine with 10-20 mg methylprednisolone acetate), and the approach of needle can be in-plane or out-of-plane (Fig. 4). A few clinical pearls are mentioned here. The ACJ is very shallow and the needle should not be inserted for more than 1 cm deep into the joint. Overzealous injection will deposit medication into the subacromial bursa. One alternative approach for needle insertion is to turn the probe 900 to the standard imaging (from long axis to short axis) and direct the needle in plane from the anterior position. When imaging the ACJ, moving the probe anteriorly may reveal a well-defined cortical discontinuity on the superior aspect of the acromion. This is the “os acromiale,” which is an accessory bone of the acromion that is derived from the non-fused epiphysis of the anterior part of the acromion. The prevalence is approximately 8% and is bilateral in one third of the cases.[12]

The accuracy of landmark-based or blind injection for ACJ is limited (40% to 66% in cadaveric studies and 39% to 50% in clinical studies).[5] Accuracy does not differ significantly based on level of experience (specialist, resident, or student).[5] In contrast, accuracy of ultrasound-guided injection ranges between 95% to 100%.[13,14]

The therapeutic role of ACJ steroid injection is unclear as a literature search only reveals a few case series.[15-19] All confirm short term benefit, but response rates are variable. In a certain percentage of patients, the effect can be very long-lasting in terms of years. In a retrospective case series, 27 patients with isolated ACJ arthritis received steroid injections with landmark-based technique.[17] Significant pain relief and functional improvement were achieved in 25 of 27 patients, with a mean duration of improvement of 20 days (range, 2 hrs to 3 months). In another study, 18 patients with isolated unilateral ACJ arthropathy were prospectively studied 2 weeks after ACJ injections were performed under fluoroscopic guidance.18 All patients had pain relief at 2 weeks, with a mean pain score decrease from 7 of 10 to 3.6 of 10 (range, 2-10 and 0-8, respectively). The average duration of pain relief was 14.3 weeks (range, 8-24 weeks). Bain et al15 performed ACJ steroid injection in 44 patients with confirmation of needle placement with fluoroscopy, and the patients were followed up for an average duration of 42 months. Approximately 14% resulted in more than 3 months of pain relief. Hossain et al[16] studied ACJ steroid injections in 25 shoulders from 20 patients prospectively for 5 years. They used the Constant score, which is a composite score of pain and function (total score of 100 points with 15 points in pain assessment), and found that patients continued to improve after 6 months. The average Constant score was significantly better at 5 years than that of preinjection level, with more than 20 point improvement in 72% of the shoulders in the final assessment. The most recent study by van Riet et al19 revealed that only 28% had a clear positive result; but, in most cases, this result was sustained at long-term follow-up (average duration 42 months). There were no complications from the injection.