How I Do It: Ultrasound-Guided Combined Suprascapular and Axillary Nerve Block

Pain following shoulder surgery can be severe and has traditionally been controlled using an interscalene nerve block (ISB).[1]  This technique is associated with well-documented adverse effects, including unwelcome arm paralysis, and intolerance of hemidiaphragm paralysis.[2]  ISB is also associated with more frequent long-term neurological deficits compared to other nerve blocks[3,4] and must be performed in proximity to important anatomical structures (e.g., vertebral artery).  Thus an alternative to ISB may be advantageous and has been described, whereby terminal nerves supplying the shoulder joint are blocked rather than the entire brachial plexus.[5-7]  Combined suprascapular and axillary nerve block (CSANB) appears to be an effective alternative to ISB for pain relief following shoulder surgery,[6,7] with the advantages of minimal side effects, reduced potential for serious complications, and less reported pain during block resolution.[6,7]

Five nerves innervate the shoulder joint and associated structures.  The suprascapular nerve (SN) carries the most extensive supply; a lesser amount travels via the axillary nerve (AN) (Fig. 1).[8]  The lateral pectoral, musculocutaneous and subscapular nerves are responsible for only minor contributions (Fig. 1).[8] 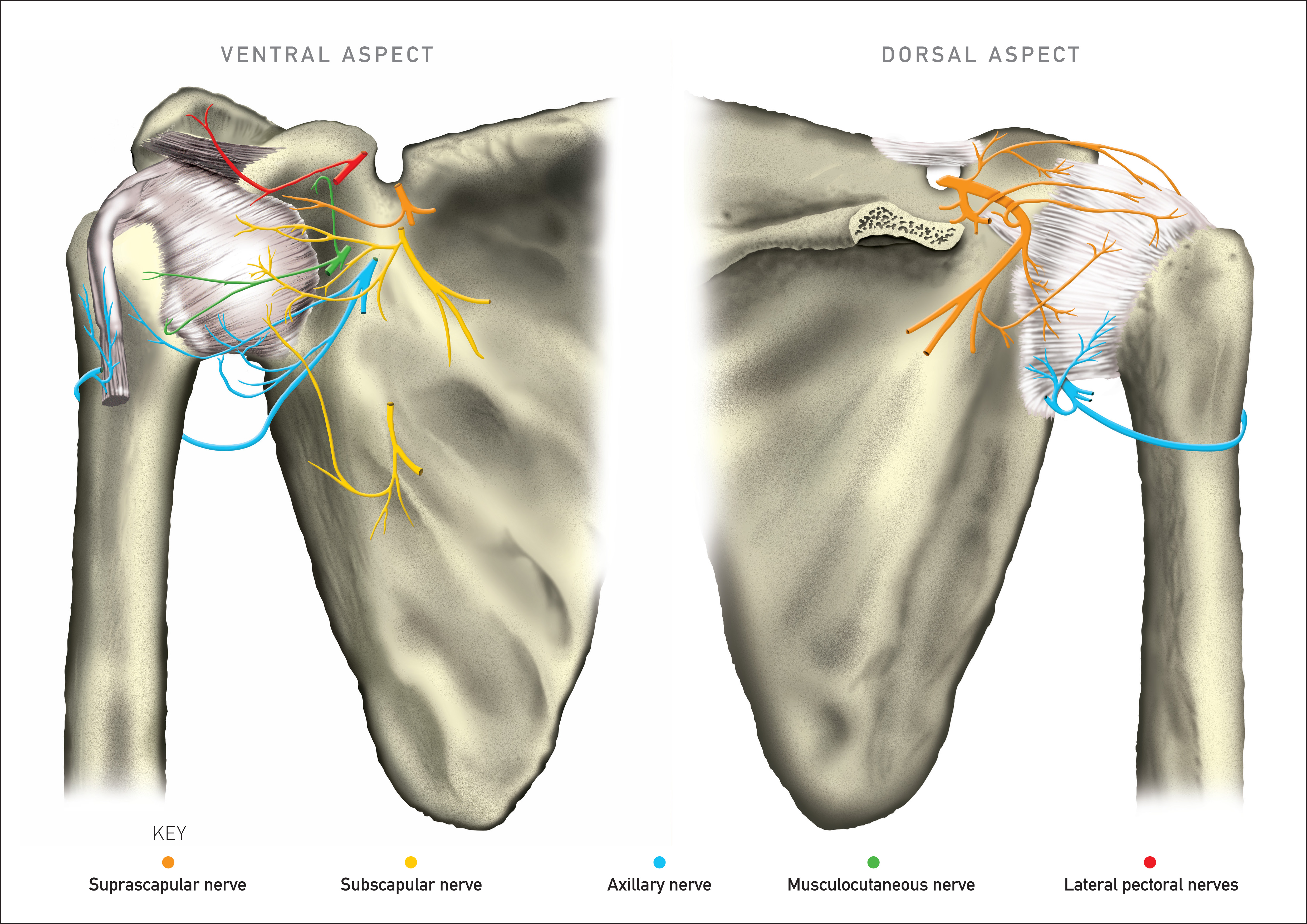 Figure 1.  Innervation of the ventral and dorsal shoulder joint and capsule

While searching for an alternative to ISB, I reasoned that a minimum requirement was blockade of the suprascapular nerve (SNB). The question to be answered was whether the addition of AN blockade (ANB) would result in better analgesia than SNB alone.[9]  I initially developed a landmark-based technique (with or without nerve stimulation) using Meier’s SNB10 and my own description of ANB.[5]  It has proven to be quick and reliable to perform, as both nerves are blocked where they run across bone:  SN on the lateral floor of supraspinous fossa (LFSF),[10] and AN on the posterior surface of the humerus (PSH).[5]

The SN and AN are both narrow and lie deep to large muscles, which make them difficult to locate with US.  To enhance my understanding of the sonoanatomy, I studied ultrasound (US) images of the SN and the AN in 50 volunteers.[9]  Each nerve was imaged in three separate regions in both short axis (SAX) and long axis (LAX); the structure most reliably visualized was bone, followed by artery and then nerve.[11]  In addition, a radiologist at my institution reviewed 37 routine shoulder MRIs, determining how frequently the SN lies on the LFSF, beneath supraspinatus, and the AN lies beneath deltoid on the PSH.[11]  For both nerves, the result was 100%; thus, as for the “blind” landmark technique, locating bone appears to be the key to a quick and reliable US-guided approach to CSANB.[11] 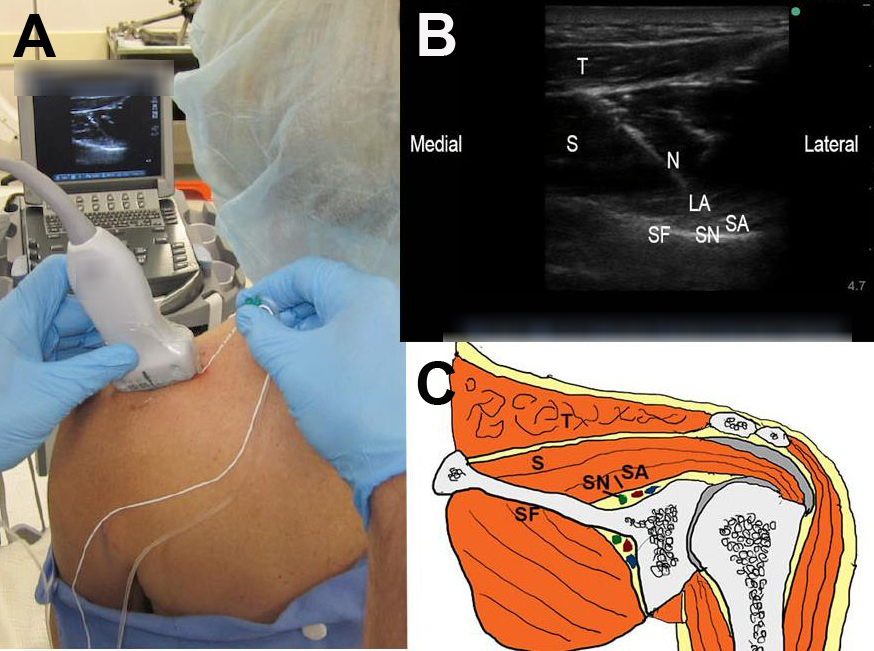 Imaging the supraspinous fossa is critical to locating the SN; you may also image the SA, as they travel together in a neurovascular bundle (NVB).  If the NVB is not visible (33% of cases in the above study[11]), directing the needle onto the LFSF and injecting 10 to 15 ml of LA under supraspinatus will reliably block the SN.  Technically, this is easiest to perform in the LAX of the fossa with the needle in-plane (Fig. 2A and 2B).  The floor of the fossa has a characteristic “ice hockey stick” pattern in this view; the tip should be aiming at the most lateral part (Figs. 2B and 2C). 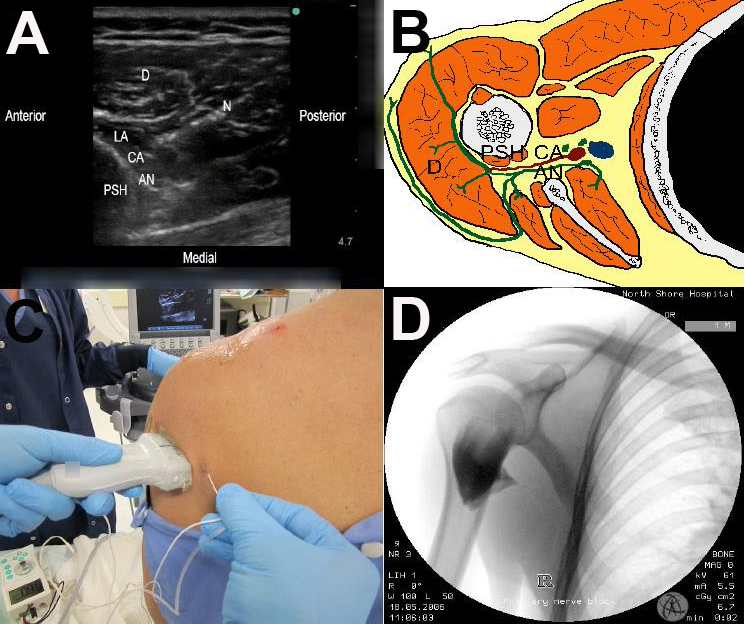 Likewise, imaging the humerus is critical to locating the AN.  Imaging the PSH may permit location of the CA, which travels with the AN in a NVB beneath posterior deltoid.  If the NVB is not visible (5-10% of cases in the above study[11]), directing the needle onto the PSH, and imaging LA spread under deltoid will result in ANB.  The posterior shoulder capsule (PSC) can assist in determining the correct point on the PSH to inject LA.  In LAX, the PSC causes the periosteum to become fuzzy; LA is injected 1-2 cm below the PSC.  It can also be seen in short axis of the humerus, by scanning superiorly until the circular periosteal image becomes blurred.

The most logical approach would appear to be in LAX of the PSH; the CA and AN appear in cross-section, and successful ANB has been described with this approach.[12]  However, the PSH is difficult to keep in view, as small probe movements result in loss of a clear image.  In contrast, the SAX view of the humerus is more stable, and this is my preferred technique despite the AN and CA being imaged longitudinally (Figs. 3A and 3B).  Placing the probe slightly lateral reduces the distance from skin to PSH and permits needle passage in-plane from a similar insertion point as with the landmark technique (Fig. 3C).

Even if imaging the NVB is impossible, locating the shoulder capsule as detailed above will allow successful ANB if LA fills the space under deltoid on the PSH (Fig. 3B).  This is reinforced by imaging contrast-enhanced LA spread with fluoroscopy during shoulder block (Fig. 3D); a potential space exists, limited laterally by entry of the AN into the deltoid, and medially by the QS.  I use 5-7 ml of LA, as 10 ml or greater is associated with higher rates of spread to the posterior cord via the QS, resulting in radial nerve blockade.

CSANB is an effective alternative to ISB for analgesia following shoulder surgery and can be performed using US despite the nerves being small and relatively deep.  As with the landmark-based technique, locating bone (PSH and LFSF) makes performance of these blocks quick, safe, and reliable.