How I Do It: Ultrasound-Guided Thoracic Paravertebral Blockade

Paravertebral block involves the use of local anaesthetic lateral to the vertebral column to produce ipsilateral anaesthesia and analgesia by blockade of the thoracic segmental nerves.  The key advantages over intercostal blocks are broader coverage (can cover multiple dermatomes and include blockade of the posterior primary ramus) and the ability to insert a catheter.Single-level injection with catheter insertion constitutes my usual approach for analgesia as part of a multimodal regimen for unilateral incisions in thoracic dermatomes, such as thoracotomy and nephrectomy.  I have found it particularly useful for management of analgesia for fractured ribs in difficult cases. A bolus dose of 15 ml 0.5% bupivacaine can cover a mean of 4 (1-11) thoracic dermatomes.[1]  Single-injection blocks performed at multiple spinal levels has been described as an anaesthetic technique for breast surgery.  There are case reports and prospective studies of bilateral paravertebral blocks being used for obstetric analgesia, and even as an alternative to general anaesthesia for abdominal surgery.[2]

Block failure occurs in approximately 12% cases,[1,3] and various patterns of spread have been observed in contrast studies.[4]  It is plausible that the use of ultrasound to accurately locate the paravertebral space and observe patterns of spread in real time may reduce the failure rate and improve local anaesthetic coverage.

Problems associated with epidural blockade, such as lower limb motor blockade, urinary retention, hypotension, and concerns about neuraxial nerve damage related to haematoma or abscess formation may explain the resurgence in use of the paravertebaral block.  Recent reports suggest improved long term outcomes, with reduced chronic pain[5] and cancer recurrence[6] after breast surgery, which is now the subject of prospective study.[7]

The thoracic paravertebral space is a wedge-shaped potential space.  Medially it is bound by the vertebral body, intervertebral disc, and intervertebral foramen.  Its anterolateral border is the parietal pleura, and it communicates with the intercostal space laterally beyond the tip of the transverse process.  The posterior border is formed by the transverse process and the superior costotransverse ligament, which forms the most important structure to be traversed by the needle.  This ligament joins the inferior aspect of the transverse process above with the superior aspect of the neck of the rib below and may be appreciated by a ‘click’ (loss of resistance) on advancement of the needle.  The contents include fat and extrapleural fascia, the segmental nerve branching into anterior and posterior primary rami, the sympathetic chain and rami communicantes, and radicular vessels.  The nerve at this point may consist of rootlets, devoid of a sheath, allowing good local anaesthetic penetration.  The nerve should lie deep to the transverse process, protecting it from the needle.  The endothoracic fascia, the deep fascia of the thorax, is a fibroelastic structure dividing the paravertebral space into anterior and posterior compartments. It is closely applied to the anterior vertebral body; laterally it contains the sympathetic chain anterior to it and the segmental nerve posterior to it.  Catheter placement relative to this layer may determine the different patterns of spread observed with this block. 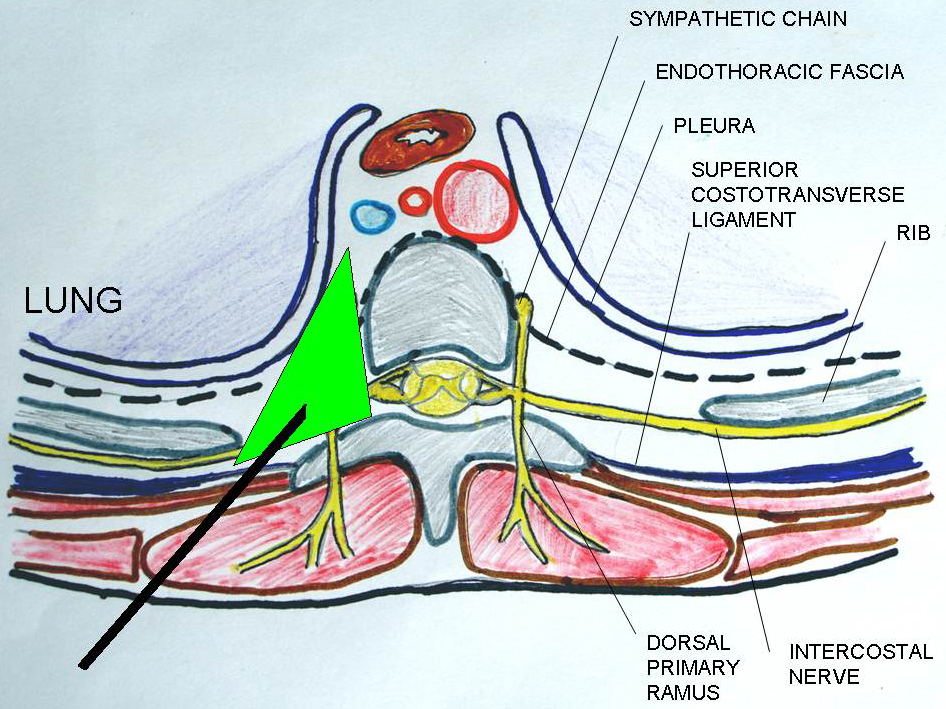 I usually start imaging with a high-frequency linear probe and change to a low-frequency curvilinear probe if imaging is difficult.  The curved probe provides a wider field of view which can help identify the midline and pleura during transverse scanning but at lower resolution.  The transverse process projects posteriorly, and the costotransverse articulation is on its anterior aspect, forming a step in bony depth and angle to allow identification of the transverse process tip with ultrasound.  With a transverse probe orientation, the acoustic shadow of these bony margins becomes deeper at the point where the transverse process joins the rib (Fig. 2).  It is important to distinguish the pleura from the acoustic shadow of bone – pleura moves with inspiration, and some penetration of ultrasound occurs.  The pleura can be distinguished from bone more easily in the sagittal plane – it is the deeper hyperechoic structure (Fig. 3).  Local anaesthetic injected into the paravertebral space should increase the depth between transverse process and parietal pleura.  Identification of the radicular vessels using colour flow Doppler while scanning the paravertebral space is difficult because of the depth and size of the vessels, and the presence of acoustic shadow. 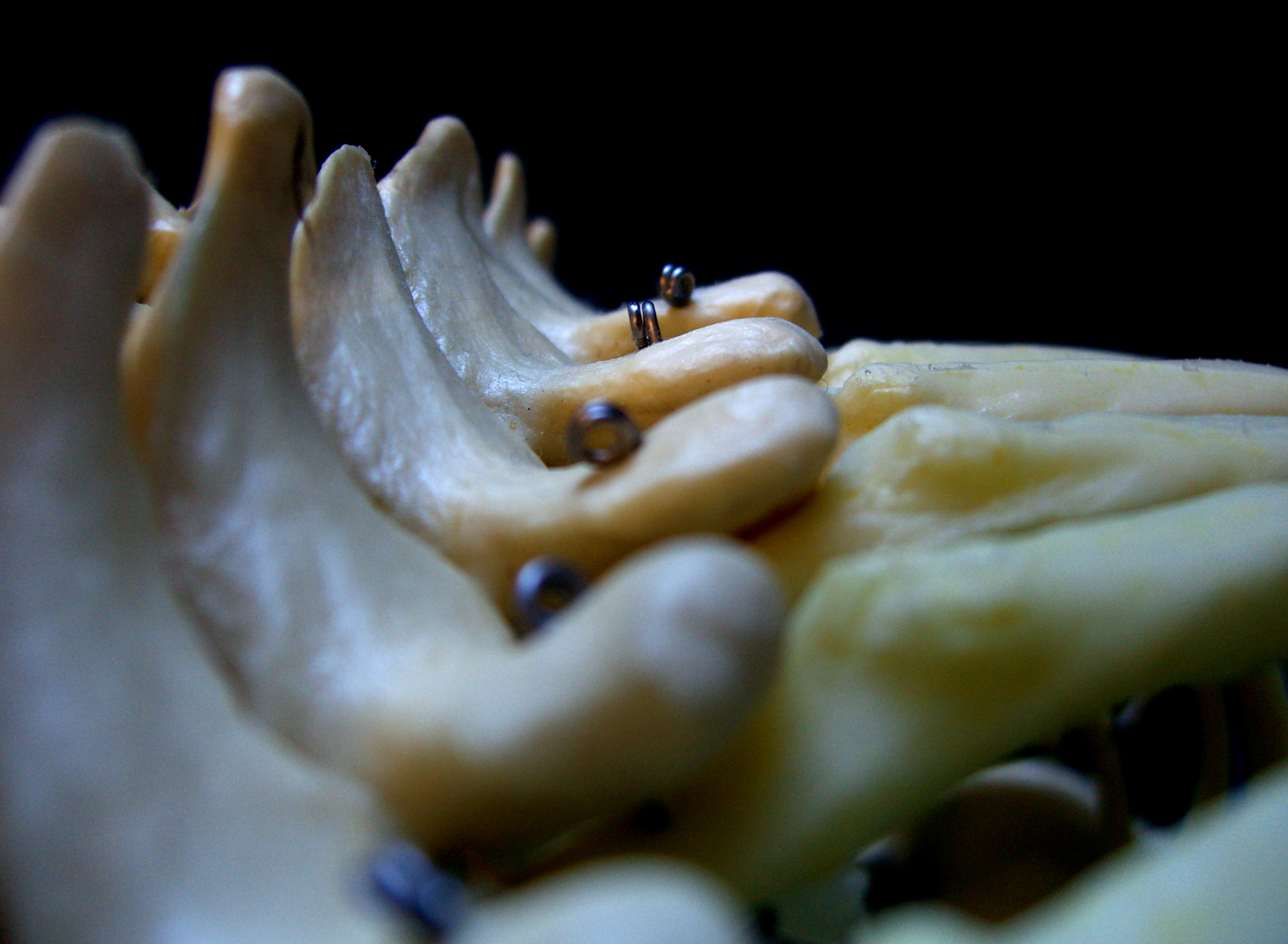 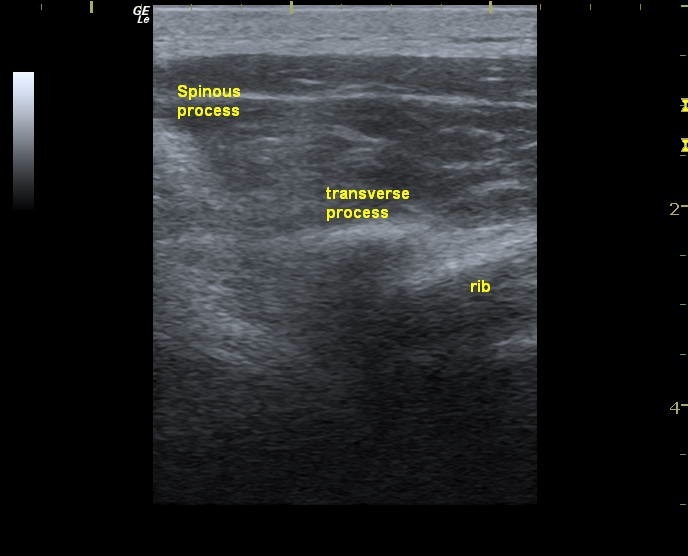 Fig 2. Note correlation of bone topography of posterior thorax in a spine model (A) with the acoustic shadow of  the transverse ultrasound image (B). 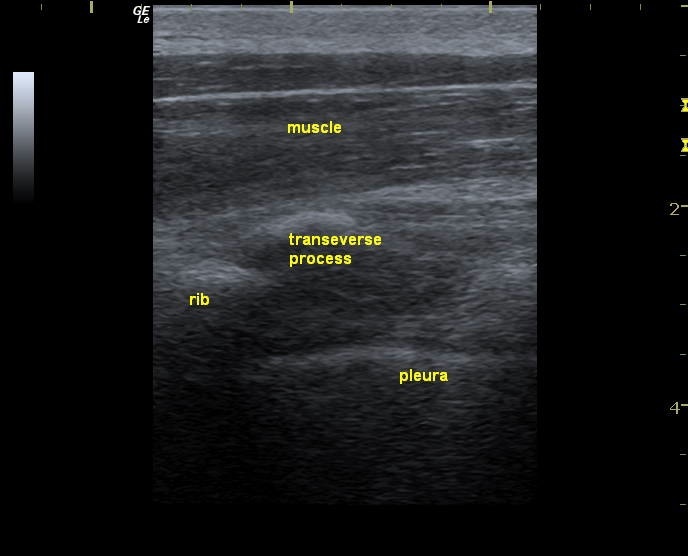 Fig 3. Sagittal paramedian scan at tip of transverse process.  Cephalad to left of image. Note the rib shadow deep and cephalad to the transverse process in this example.  Lateral angulation of probe helps imaging of the pleura as it reflects medially towards the mediastinum.

A number of US-guided approaches to the paravertebral space have been advocated, and no particular approach has been proven superior.8  Proximity to the neuraxis and lung require a good orientation to the anatomy, and steep angles of insertion may make needle visibility difficult.  Orientation to the transverse and spinous processes during needle insertion is greatly helped by creating surface markings during your survey scan.

For novice sonographers, in obese patients, or if there is subcutaneous emphysema making imaging difficult, I recommend an “ultrasound-assisted” approach.  A survey scan defines the location and depth of the transverse process tip for marking and the depth to lung.  When measuring distance, only light probe pressure should be used.  Proceed with paravertebral blockade in the traditional way, ensuring the angle of needle insertion matches the angle of the ultrasound beam during the survey.  The non-ultrasound technique has a good success rate and low risk of complications.[3] 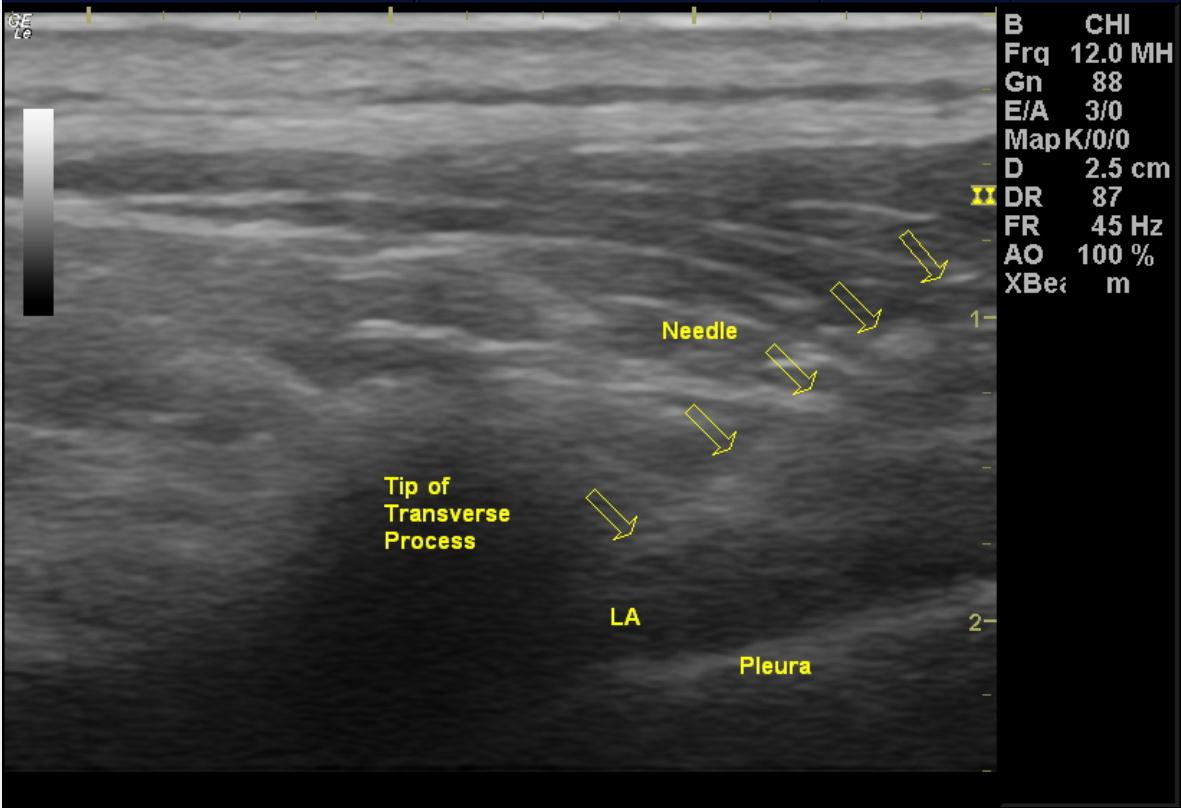 Fig. 4 Transverse-in plane approach. Probe has been rotated from the image obtained in Figure 2 to visualize pleura rather than rib. Needle tip is just deep to transverse process and is obscured by its acoustic shadow. Note local anaesthetic (LA) distending the lateral paravertebral and intercostal space
Sagittal in-plane approach.  Positioning the probe in a sagittal orientation 2-3 cm lateral to the midline to obtain an image as in Figure 3 clearly distinguishes bone and pleura. Angulating the probe slightly laterally may improve visibility of the pleura which reflects anteriorly toward the mediastinum at this site (Fig 1).  Between the transverse processes are the superior costotransverse and intertransverse ligaments and, deep to these,  the paravertebral space. The difficulty I find with this approach is that the angle of insertion becomes relatively steep to map a course between the bony landmarks and finish close to pleura, making needle visibility difficult (Fig 5).  This may be helped by flexing the patient as much as possible, making the target slightly more shallow and the bones further apart, and/or using a more echogenic needle.  Potential advantages include observation of spread in the adjacent acoustic windows and catheter insertion is not pointing toward the neuraxis. 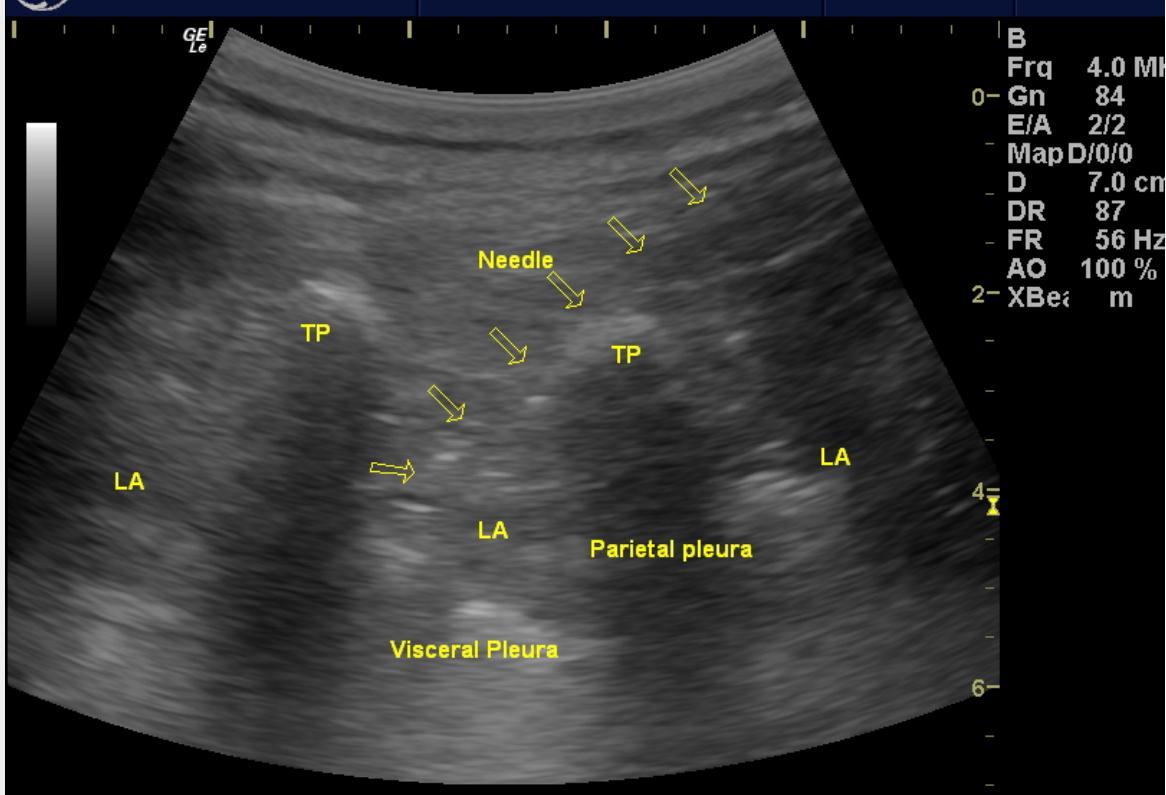 Figure 5. Sagittal in-plane needle insertion. Note the small distance between the transverse processes determines the steep angle of insertion. Local anaesthetic can be seen in the paravertebral space at the levels adjacent to the insertion point when a curved probe is used. A small haemothorax from fractured ribs is also present separating the pleura

Paravertebral blockade is experiencing a resurgence in interest and use.  As regional anaesthetists become more experienced with the use of ultrasound, its application to guide routine paravertebral insertion is inevitable.  Although this is challenging, it can be achieved.  Further study is required to define the optimal approach and demonstrate improved outcomes with ultrasound guidance.