How I Do It: Ultrasound-Guided Quadratus Lumborum Block

Use of ultrasound guidance for regional anesthesia has led to a surge in the number of newly described interfascial plane blocks in which local anesthetics are administered to achieve surgical anesthesia or postoperative analgesia. The transversus abdominis plane (TAP) block is, by far, the most studied from among all these new procedures. An ultrasound-guided approach as far posterior as the lateral border of the quadratus lumborum (QL) muscle was described during a presentation by Dr Blancoat at the European Society of Regional Anesthesia annual meeting in 2007 (unpublished work). In 2011, Carney et al observed posterior spread of the contrast with the same approach to the thoracic paravertebral space from the fifth thoracic to the first lumbar vertebral level using magnetic resonance imaging.[1]

Subsequently, Borglum et al described the transmuscular approach. With this approach, MRI studies showed the spread of local anesthetic cranially along the QL muscle reaching beyond the arcuate ligaments to the thoracic area.[2] QL blocks resulted in a wider sensory blockade compared to TAP block when performed using the similar volume of local anesthetic[2] (T6-L1 for QL block vs T10-T12 for the TAP block). Presumably, QL block can also involve the lateral cutaneous branches of the thoracoabdominal nerves (T6 to L1). The practice of QL block is gaining momentum; this article aims to describe the block technique and related relevant sonoanatomy.

All the indications described are based on case descriptions and personal communications. Midline incision requires bilateral blocks for adequate coverage.

The QL muscle is a part of the posterior abdominal wall dorsal to the iliopsoas muscle. It originates from the medial half of the iliac crest and inserts into the lower medial border of the 12th rib; it also has four small tendinous insertions to the apices of the transverse processes of the upper four lumbar vertebrae. The ventral rami of the spinal nerve roots (including the subcostal and iliohypogastric nerves) pass between the QL and its anterior fascia (Figure 1). 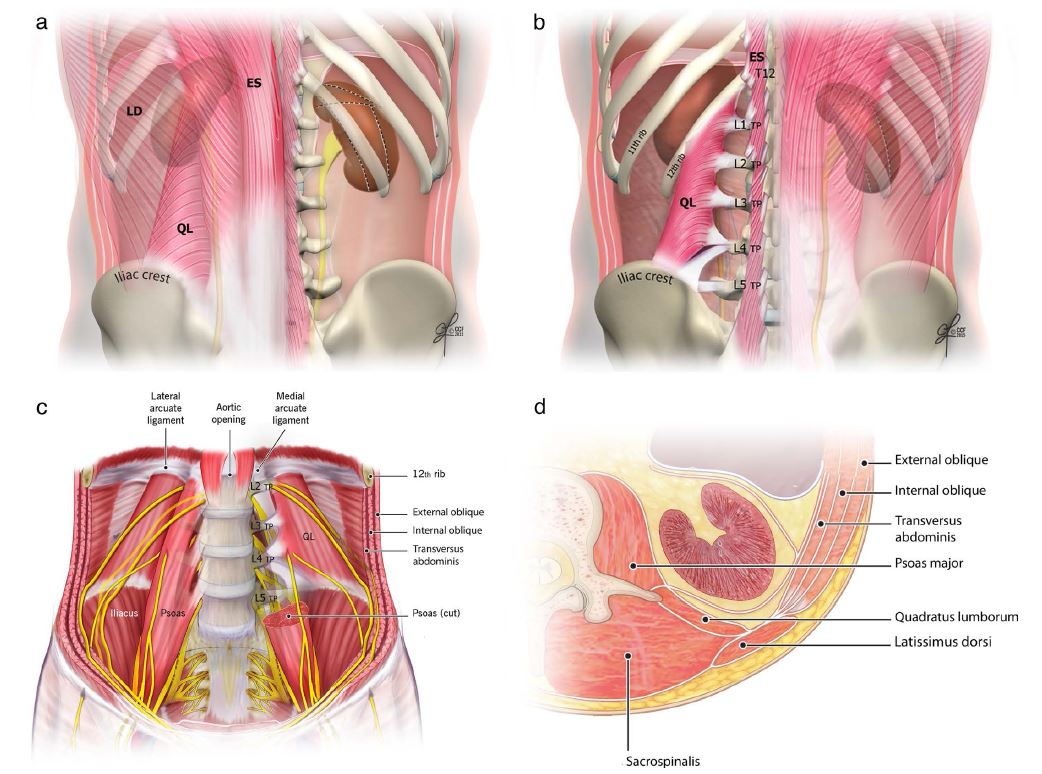 When the QL muscle is visualized using ultrasound, the tendons attached to the lumbar transverse processes usually look like a small boat hooked to a stick (“stick” referring to the tip of the transverse process), while the psoas muscle, which lies posterior to the QL, looks like water under the boat. This view is typically seen when scanning takes place at the level of a transverse process. The psoas muscle is usually hyperechoic at this level because of its intramuscular fibrous tendons. The QL muscle is surrounded by thick fibrous thoracolumbar fascia (TLF), which is usually hyperechoic. The transversalis fascia encases the transversus abdominis muscle and continues posterior and
medially to cover the anterior side of the investing fascia of the QL.

The TLF consists of both aponeurotic and fascial connective tissue. Its most important function is providing a retinaculum for paraspinal musculature in the lumbar region. It consists of three layers: anterior, middle, and posterior. The QL is located anterior to the middle layer and is separated from the psoas muscle by the anterior layer. The posterior and middle layers of the TLF fuse laterally to form the lateral raphe, a weave of connective tissue that joins with the transversus abdominis and internal oblique muscles. The middle layer of the TLF is multilayered (intermuscular septum) and medially attaches to the transverse processes of the vertebra
(Figure 2).[3-4]

Figure 2. Illustrates the different layers of the thoracolumbar fascia.

Even though the fascial layers in the thoracic and lumbar regions are described separately, the thoracic and lumbar paravertebral spaces are continuous. This continuity occurs dorsal to the diaphragm through the medial and lateral arcuate ligaments and the aortic hiatus. This might be the presumed mechanism of the spread of injectate cranially up to the thoracic paravertebral space and caudally (Figure 3).[5] A number of vital structures are susceptible to possible injury, which can make these blocks challenging. A clear understanding of the relevant anatomy is critical for safe performance of these blocks. 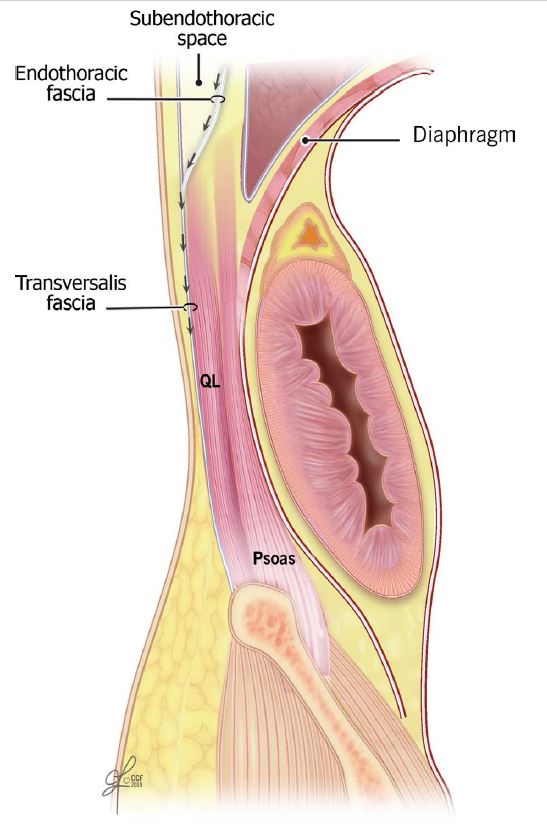 Figure 3. Illustrates a sagittal section showing the fascial relations of the lower thoracic subendothoracic paravertebral space and the retroperitoneal space.

Kidney. Caution must be taken to avoid kidney injury. The lower pole of the kidney, which lies anterior to the quadratus lumborum muscle, is separated from the QL muscle only by perinephric fat, the posterior layer of renal fascia, and the anterior layer of thoracolumbar fascia (Figure 2).

Blood vessels. The four lumbar arteries arise from the aorta; they course posterior to the psoas major muscle. The abdominal branches of the lumbar arteries run laterally behind the QL muscle and then forward between the abdominal muscles (Figure 4).

Peritoneum and bowels. Anterior to the anterior layer of the TLF is a variable amount of fatty tissue, which forms a bed for the kidneys and the ascending and descending colon (Figure 2).

The lateral decubitus position is preferred over the supine position as it gives more exposure to the neuroaxial structures, more stability in handling the ultrasound probe and needle, and often more patient comfort. If possible, the hip is abducted and laterally flexed toward the same side of the block to contract the QL muscle. After sterile prepping and draping, low frequency (2–6 MHz) curved array ultrasound transducer is preferred to provide adequate penetration and to visualize the three lateral abdominal muscle layers, the QL muscle, and the anatomy of the adjoining lumbar paravertebral area. This might be a better option especially when a transmuscular approach is intended. The orientation marker is directed laterally for a transverse scan.

It is possible to perform in the supine position; the disadvantage is impaired visualization of the lumbar paravertebral area. 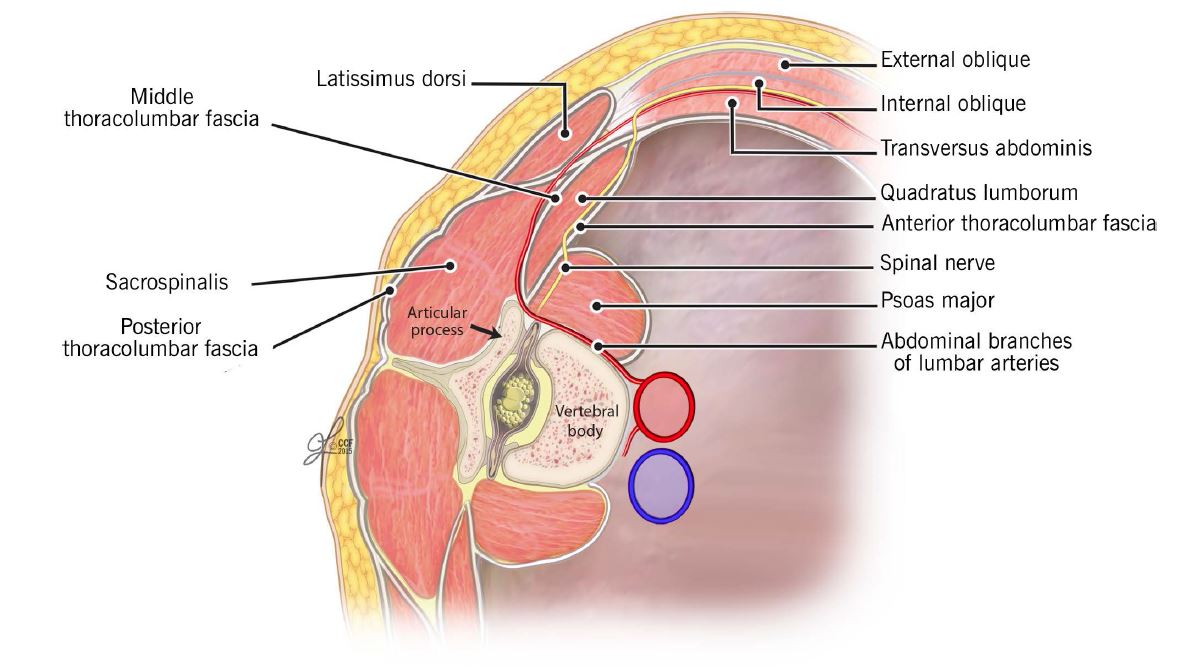 Figure 4: Illustrates a cross-section of the QL muscle and its relation to the entral rami of the spinal nerve roots (yellow) and the abdominal branches of the lumbar arteries (red). QL = quadratus lumborum

Suggested Scanning Techniques for the Procedure. With the patient positioned in the lateral position, scanning usually starts at the midaxillary line between the iliac crest and subcostal margin, moving the probe posteriorly until tapering of the three abdominal muscle layers and appearance

of fascia transversalis and QL muscle is observed (Figure 5). The fascia transversalis usually appears as a hyperechoic layer, forming a safe landmark to separate the muscle layers from the perinephric fat and the abdominal contents below the level of the lower pole of the kidney. In addition, sometimes the bowel, kidney, and perinephric fat movements with breathing can be visualized underneath, making it helpful as a more definite landmark. Scanning can also be done beginning posteriorly 4–5 cm lateral to the lumbar spinous process at the L3–4 level or higher. At this level, the transverse process of lumbar vertebrae, erector spinae muscle, psoas major muscle, and QL can be identified as a Shamrock sign, as described by Børglumet al (Figure 6).[5] 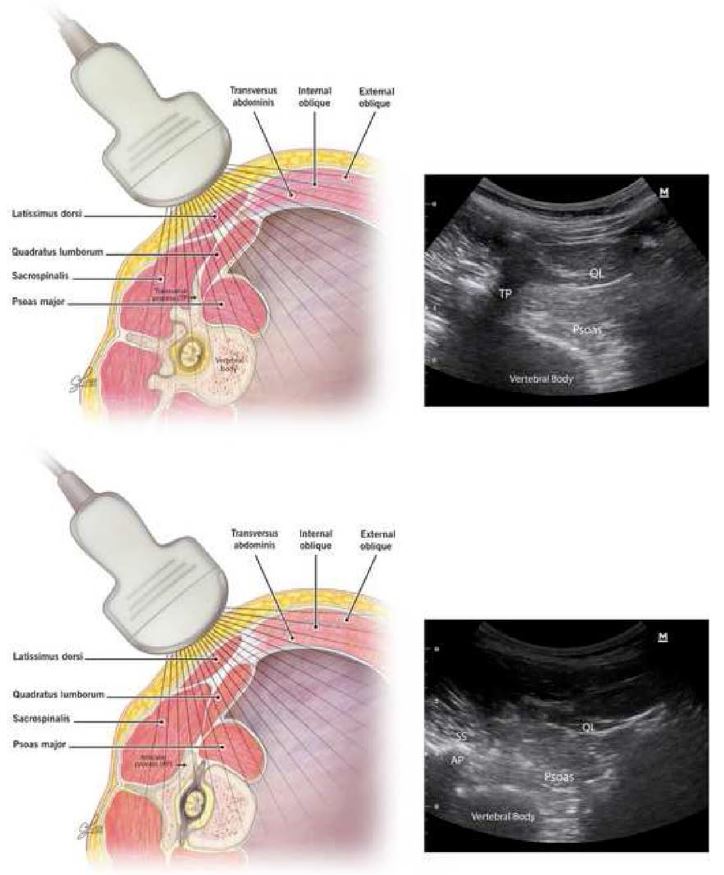 As described previously in the sonoanatomy section of this article, the outline of QL can be seen in two different views: the oblique transverse view at the level of transverse process and the intertransverse process view. The advantage of an intertransverse view is the visualization of the psoas muscle completely by avoiding the acoustic shadow of the transverse process. The transducer may need to be slightly tilted medially to produce both of the above-mentioned views (Figure 6). The procedure can be done using either of these two views; however, it is suggested that doing the procedure with the transverse process in view may be better with the bone as an easy identifiable landmark making. It is also advisable to double-check the other anatomical landmarks—such as tapering transversus abdominis muscle, transverse process or lamina of the visualized vertebra, and vital organs such as kidney and peritoneal folding—while scanning by moving the transducer from posterior to anterior and vice versa before finalizing the point of needle insertion. 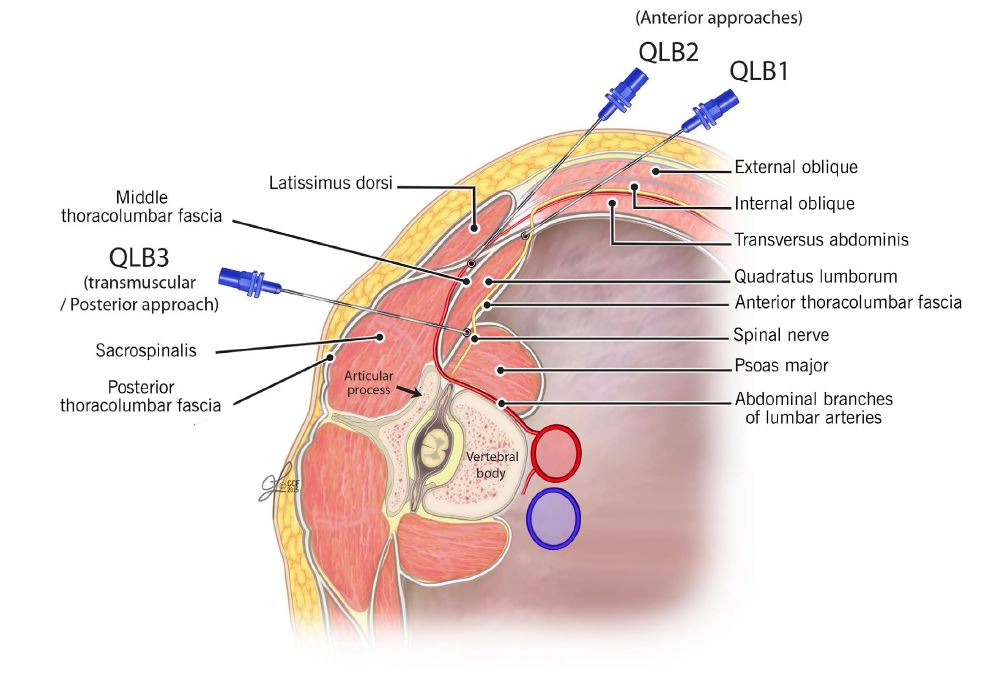 Figure 7: Illustrates the trajectory of needle for all three approaches of QL block (QLB1, QLB2, and QLB3).

Description of the Technique - The Needling Phase

Which Type Is Better? Presently, there is no available literature comparing the safety and efficacy of the three types of QL block. The optimal positioning of the needle tip and spread of the local anesthetic and their relative effects is yet to be investigated in larger studies.

Dose and Volume of Local Anesthetic. Because this is a “tissue/fascial plane” block, it requires a large volume of local anesthetic to obtain a reliable block similar to other blocks of its kind. Volumes of 20–30 mL are usually recommended. The size of the patient needs to be considered regarding the dose of local anesthetic to ensure the maximum safe dose is not exceeded, especially with bilateral blocks. The block onset time depends on a number of factors, including, but not limited to, vascularity of the area, the exact tissue plane where the local anesthetic was injected, type, and concentration of local anesthetic used. However, the ultrasoundguided QL blocks seem to take longer to begin, compared to thoracic paravertebral block.[6]

Complications. Other than complications associated with any other peripheral nerve block procedures, complications related to this block are due mainly to faulty technique and lack of anatomical understanding of the tissue planes. These might lead to inadvertent puncture of intra-abdominal structures such as the kidney, liver, and spleen. Extra caution should be taken—especially for the rightsided block—as the right kidney is slightly lower than the left and smaller to be seen with ultrasound.

Transient femoral nerve palsy after QL type 3 was observed in one patient at our institution. In bilateral blocks with high volume, systemic local anesthetic toxicity should be considered.

QL Block in the Anticoagulated Patient. The risks of bleeding complications are not known, and there are no specific recommendations. Due to the vascularity of the area, the retroperitoneal spread of hematoma, and proximity of the transmuscular approach to the paravertebral area and the lumbar plexus, ASRA guidelines[7] should be considered in patients on anticoagulants who are receiving QL blocks, either single injection or catheter. Risks versus benefits should be carefully considered.

The available limited literature and experiences demonstrate that QL block has the potential to produce sensory blockade and analgesia along lower thoracic and lumbar regions and can be an alternative analgesic modality for selected abdominal surgeries. In addition to the characteristics of a TAP block, QL blocks have the potential to provide some visceral analgesia, considering its spread to the paravertebral space. Well-designed large studies are needed in the future to prove the efficacy and potential of this block.

The author acknowledges the contribution of Dr R. Blanco and Dr Vafi Salmasi to the work presented in this article and images.

All images are taken with permission from Cleveland Clinic art photography department.