First described by Leriche in the 1930s,[1] the stellate ganglion block (SGB) has been in use since that time without significant modification as a diagnostic and therapeutic intervention in chronic regional pain syndromes of the upper extremities[2-3] as well as for a variety of medical conditions such as vascular insufficiency, post-herpetic neuralgia, phantom pain, vascular headache, cardiac arrhythmia, to name a few.[4] 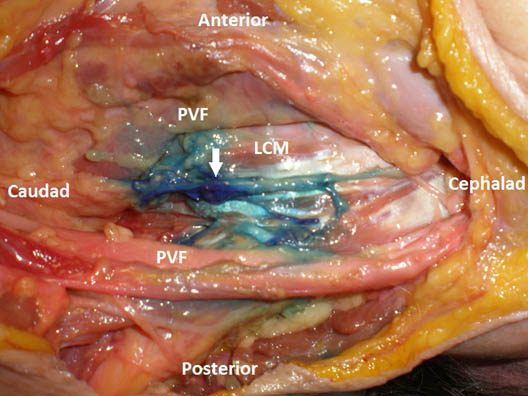 While several methods of stellate ganglion blockade have been described, the most popular approach is the classical technique using the anatomical landmark of the prominent anterior tubercle of C6 transverse process (Chassaignac’s tubercle). A needle is advanced perpendicular to the skin while retracting the sternocleidomastoid muscle along with the internal carotid artery until bony contact is made with the tubercle of C6 transverse process. Different volumes of local anesthetics are recommended in the literature[9] ranging from 5–20 mL. There is no single accepted test to confirm successful block, although the presence of Horner’s syndrome and elevation in skin temperature of the upper extremities by 1–3°C are commonly used.[10]

The above technique relies on accurate localization of the C6 tubercle, despite the fact that the ganglion itself lies at the level of the first rib. As a recent anatomical study demonstrates, there is large variability in the size and location of the landmarks used to localize C6.[11] Furthermore, there is a significant risk of vertebral artery damage due to the narrow dimensions of the transverse process (6 mm) in the cephalad to caudad direction. While the use of X-rays minimizes the risk,[12] precise location of the cervical sympathetic trunk is defined by the fascial plane of the prevertebral fascia, and this cannot be resolved by means of fluoroscopy. Vascular structures (the inferior thyroid, the vertebral and carotid arteries) and soft tissues (the thyroid gland and esophagus) are also not seen with fluoroscopy and are therefore at risk of puncture with a fluoroscopy-guided technique.[13] Lateral deviations of the needle may result in contact with the posterior tubercle where an injection of local anesthesia can result in a transforaminal injection.[11]

Studies to define anatomic distribution of injections performed at C6 have produced conflicting results due to the limitations of the techniques employed.[14-17] Spread of local anesthetics depends on the needle tip position either anterior or posterior to the prevertebral fascia. Injections posterior to the prevertebral fascia are associated with direct deposition of an injectate onto the sympathetic trunk (Figure 1) and greater caudal spread of local anesthetic.[15][18] High failure rate of the classical technique of SGB is possibly related to inconsistent position of the needle tip in relation to the fascial planes.[14][19] Higher volumes of injectate, which may block the stellate ganglion by overflow or diffusion, are associated with a higher risk of hoarseness secondary to contact with the recurrent laryngeal nerve[13-15] and somatic blocks of the brachial plexus.[15] 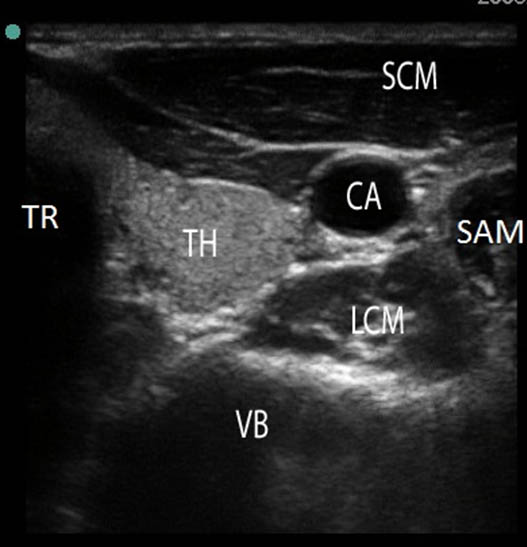 The patient is placed in the supine position with the neck in slight extension. A high frequency linear transducer is placed at the level of the cricoid cartilage to allow cross-sectional visualization of anatomic structures, including the C6 vertebral body, longus colli muscle, prevertebral fascia, carotid artery and thyroid gland (Figure 2).

Alternatively a low frequency curved transducer may be used to obtain a “panoramic view” (Figure 3). A pre-scan is important in planning the path of needle insertion as the presence of the esophagus[13] and the inferior thyroidal artery[13] may obviate the needle insertion path between the carotid artery and trachea. In that situation, the needle may be inserted lateral to the carotid artery. 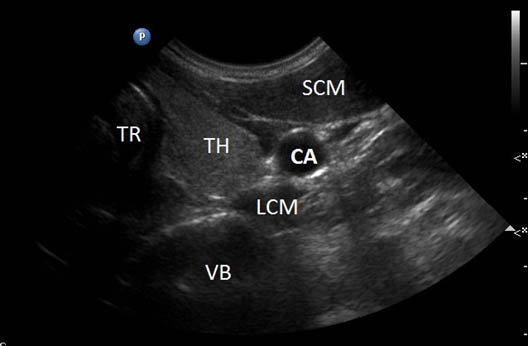 The tip of the needle is directed under the prevertebral fascia superficial to the longus colli muscle (video clip 1). This target point is desirable because 1) a suprafascial injection results in the spread of injectate around the carotid sheath with medial, posterior, or anterior extension, increasing the risk of hoarseness, probably secondary to local anesthetic spread to the recurrent laryngeal nerve medial to the carotid and lateral to the trachea;[15] and 2) the subfascial injection results in more caudal spread of the injectate towards the stellate ganglion.[15][18] Care must be taken to visualize the spread of injectate under real-time scanning. Absence of injectate spread may suggest inadvertent intravascular injection. 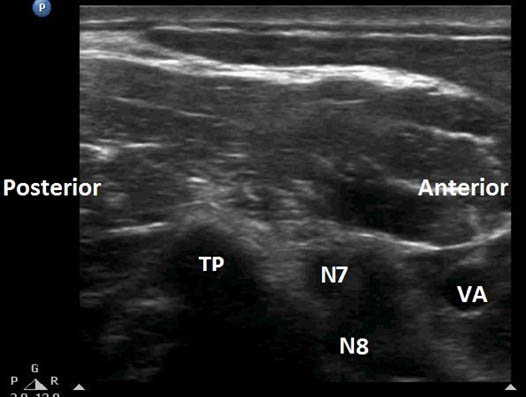 At the C6 level a spindle-shaped structure can be localized on the short-axis view in 30% of cases (the middle cervical ganglion). It is typically situated on the anterolateral surface of the longus colli muscle; if the ganglion could not be identified, some widening of the tissue plane below the prevertebral fascia could usually be appreciated.

When clear picture of pertinent anatomy is obtained the transducer should be moved slightly anteriorly until only the anterior tubercle of the C6 transverse process is visible adjacent to the projected entry point of the needle, and no visceral or neural elements are situated on the line connecting the entry site and the lateral surface of the longus colli muscle (Figure 6). 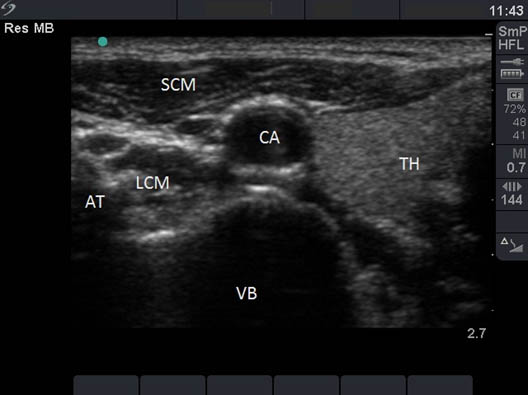 Occasionally the internal jugular vein is seen within the projected needle track, but it could be collapsed readily under light transducer pressure. Typically the needle passage is entirely intramuscular, i.e., through the sternocleidomastoid muscle or the anterior scalene muscle or both. Under real-time ultrasound guidance, a block needle is inserted via the “lateral pathway” using the in-plane technique (Figure 7). 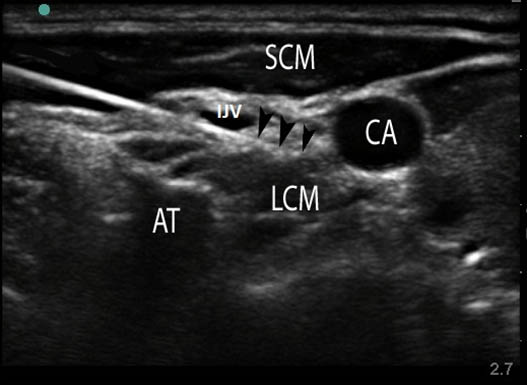 The author recommends double syringe injection technique. Two syringes are connected to the needle by means of a three-way stopcock and extension tubing; the first syringe contains NaCl 0.9% and the second contains a local anesthetic. Once placement of the needle had been confirmed, 1–2 mL of NaCl should be injected to confirm subfascial placement of the needle. The NaCl allowed clear separation of the tissue planes (video clip 2). If the spread is appropriate, 5 mL of local anesthetic is injected.

Kapral et al.[20] compared ultrasound-guided stellate ganglion block with the blind injection. These authors used a lower volume of local anesthetic (5 mL rather than 8 mL) for the ultrasound technique. The ultrasound technique did not result in hematoma (as opposed to 3 in the blind injection group), and was associated with a more rapid onset of Horner’s syndrome. However, since tissue visualization was probably not feasible below the C7 level, these authors concluded that a local anesthetic depot was limited to the C4–C7 levels and speculated that upper extremity sympathetic blockade was not related to blockade of the stellate ganglion per se.

Shibata et al.[21] suggested that subfascial injection would result in better spread of the injectate and a more reliable sympathetic blockade. The published image is ambiguous and it is not clear whether subfascial or intramuscular injection was actually performed. Narouze at al.[13] further emphasized the risks of a blind approach at the C6 level e.g., accidental esophageal puncture particularly on the left side. In addition, the needle traverses the thyroid gland and the inferior thyroid artery may cause a hematoma formation.

Gofeld at al.[18] performed a combined preclinical-clinical study with imaging validation and confirmed subfascial location of the sympathetic trunk. The lateral technique with injection of 5 ml of a local anesthetic performed at C6 level will result in reliable spread of the injectate onto the stellate ganglion. This study also claimed improved safety when the injection performed laterally to the carotid sheath and the thyroid gland.

This is considered an intermediate (level 2) block (intermediate). Although traditionally named a stellate ganglion block it is in reality a cervical sympathetic trunk block.

The stellate ganglion (SG), if present, extends from the level of the head of the first rib to the inferior border of the transverse process of C7. It lies medial (more often) or posterior to the origin of the vertebral artery and immediately adjacent to the dome of pleura! It is thus understandable why the block is usually performed more cranially at the level of the transverse process of C6 (which often includes part of the middle cervical ganglion) to avoid complications. The primary target in this case is the cervical sympathetic trunk at that level. Blockade of the SG is only indirectly achieved by virtue of inferior spread of local anesthetic depending on the volume injected.

The CST itself is deep to the “prevertebral fascia” that separates the CST from the neurovascular bundle in front i.e., the internal carotid artery, common carotid artery, internal jugular vein, and vagus nerve.

The CST appears in ultrasound images as either a flat or spindle shaped neural structure (always smaller than the vagus nerve which is round). If present, the middle cervical ganglion may appear oval and in most cases it is found at the C5 level. The echogenicity of both the CST and middle cervical ganglion may vary (not the least due to artifacts).