Although chest radiographic findings of an elevated hemidiaphragm suggests phrenic nerve paralysis, sonographic assessment of the diaphragm provides a more accurate and quantitative analysis (movement and contractility) that anesthesiologists can perform at the bedside before or after those nerve blocks. Preoperative diagnosis of diaphragm dysfunction on the surgical site's contralateral side may warrant suprascapular and axillary nerve blocks or other alternate techniques in patients with pre-existing respiratory dysfunction. Additionally, when dyspnea occurs after an interscalene block, chest sonography can be used to identify iatrogenic pneumothorax.

Could a perioperative ultrasound examination be used to assess diaphragm function and reversal of phrenic nerve blockade prior to extubation?

In this article, we will describe sonographic evaluation of the diaphragm at the zone of apposition (ZOA) pertinent to the practice of anesthesia. Unlike sonography of diaphragm excursion, which is influenced by the accessory muscles of respiration, diaphragm thickening more accurately quantifies diaphragmatic contraction.

A 58-year-old American Society of Anesthesiologists class III male patient presented for a right rotator cuff repair. He had a history of smoking, well-controlled chronic obstructive pulmonary disease, obstructive sleep apnea, obesity, difficult airway, diabetes mellitus, and hypertension. He denied dyspnea at rest. After a right interscalene nerve block, rotator cuff repair was performed under general anesthesia. At the conclusion of surgery and after reversal of neuromuscular blockade, he was fully responsive to command. Because he had mild respiratory dysfunction, he was extubated. Following extubation, he required reintubation because of worsening dyspnea. He was admitted to the intensive care unit, where he was successfully extubated the following day. Did the interscalene nerve block and associated phrenic nerve block cause diaphragm paralysis? Could a preoperative ultrasound examination have identified diaphragm dysfunction that would warrant phrenic nerve- sparing blocks? Could a perioperative ultrasound examination be used to assess diaphragm function and reversal of phrenic nerve blockade prior to extubation?

Diaphragmatic evaluation at the ZOA: ABCDE

Sonographic assessment of diaphragm motion and contractility is performed at the ZOA, which is best seen in the coronal plane at the level of the eighth and ninth ribs in the region of the axillary or anterior axillary line (Figure 1A). The diaphragm appears as a thin hypoechoic or isoechoic structure located between two hyperechoic layers: peritoneum and diaphragmatic pleura (Figure 1B). During inspiration, the diaphragm normally thickens more than 20% (Figure 2). 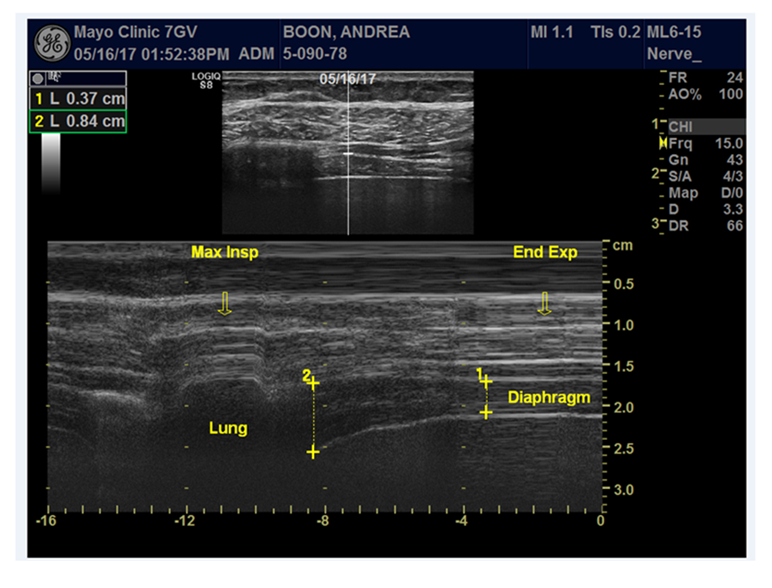 In Figure 2, a linear array transducer (more than 10 MHz) is placed in the midaxillary or anterior axillary line in the coronal plane, along the ZOA between the eighth and ninth intercostal space. The upper image is taken in B-mode. The lower image is taken in M-mode and shows the diaphragm thickening during inspiration.

Ban et al described a simple technique (Figure 3) for evaluation of the diaphragm: ABCDE. A linear array transducer is placed parallel to the anterior axillary line just caudal to the level of the nipple. Lung sliding superficial to the diaphragm during breathing will be evident as a bright hyperechoic shadow entering the field of view from the cephalad aspect. As the transducer is moved caudally, the diaphragm thickens during inspiration and is evaluated caudal to the pleural line so that the diaphragm is not obscured by pleura. During unforced inspiration, the intercostal muscles remain still, and the diaphragmatic pleura descend caudally. The presence of pleural movement (sliding lung sign) does not equate to diaphragm contraction as the accessory muscles of respiration and the contralateral diaphragm can cause pleural motion, despite the presence of ipsilateral hemidiaphragm paralysis/abdominal paradox. 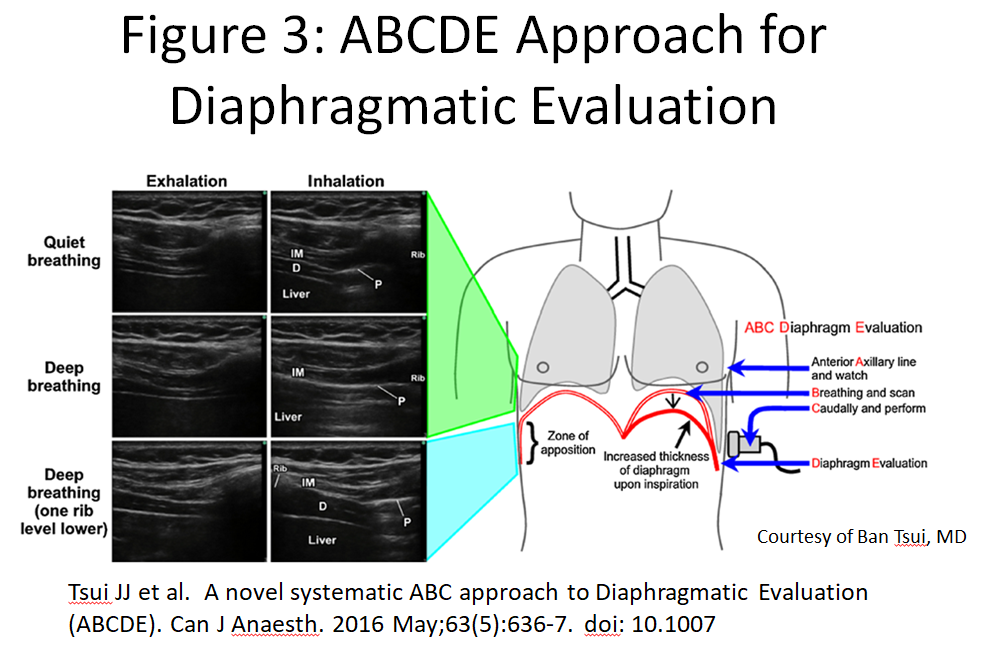 TR = thickness at maximal inspiration/thickness at end expiration, which is normally greater than 1.2.

TF serves as a measure of the efficiency of diaphragmatic contractility and can be calculated by using the B-mode.

Patients with acute hemidiaphragm paralysis from interscalene nerve block will have normal diaphragm thickness, but the degree of thickening (TR or TF) would be diminished.

Unilateral diaphragm paralysis that typically occurs after interscalene block can be diagnosed using M-mode at the ZOA. After successful phrenic nerve block, forceful inhalation or sniffing (Figures 4 and 5) will cause the contralateral hemidiaphragm to increase the intra-abdominal pressure, which then passively shifts the paralyzed/ flaccid diaphragm cephalad, resulting in an abdominal paradox. 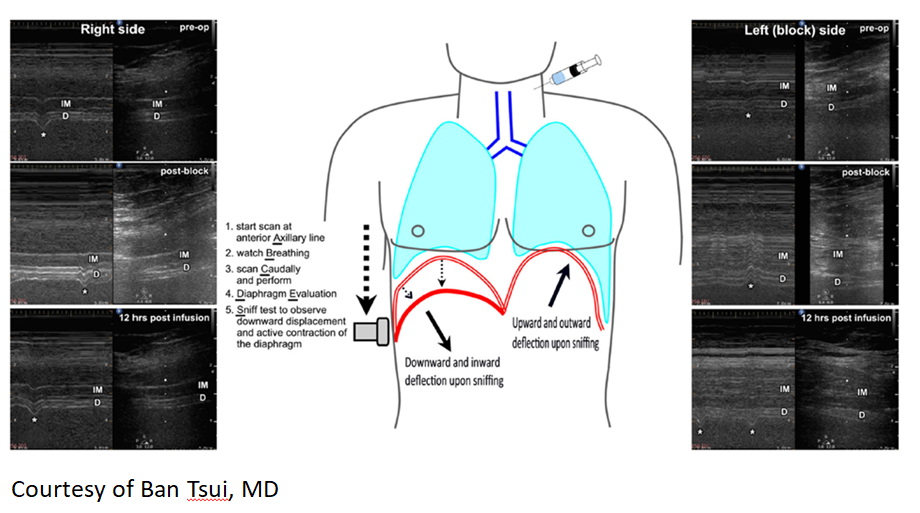 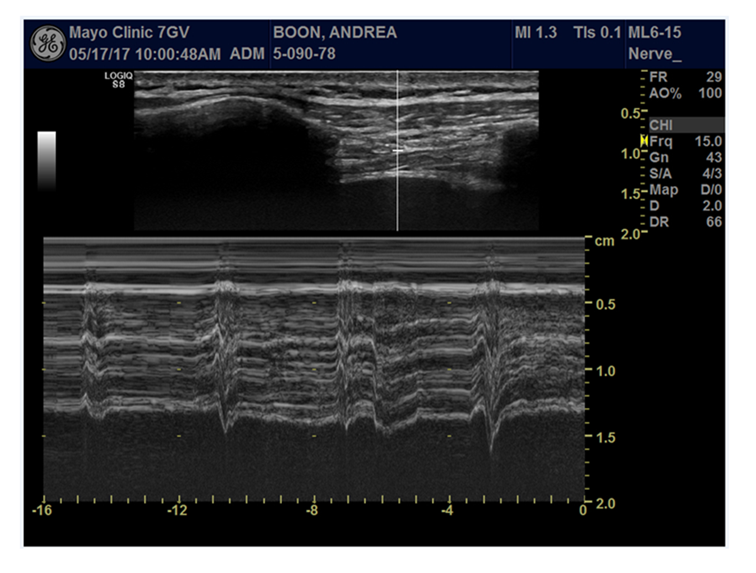 The abdomen moves inward, and the rib cage expands in response to the increased negative intrapleural pressure. Additionally, the mediastinum shifts to the contralateral side. However, observing this phenomenon can be difficult, and a false-positive finding may occur in the absence of diaphragm paralysis. False-negative results can also occur because accessory muscle activation can cause rib cage expansion, displacing the diaphragm caudally. These errors can be eliminated by diaphragm ultrasound at the ZOA, using B-mode, to evaluate for the presence of normal diaphragm thickening.

The supine position provides the most accurate measurement of diaphragm excursion because the abdominal viscera move more freely, and an abdominal paradox is readily seen. During the sniff test, Naik et al reported an upward spike during M-mode sonography, indicating displacement of the hemidiaphragm cranially instead of caudally (abdominal paradox), whereas a normal diaphragm briefly descends during sniff testing, evident as a downward spike.[6]

Other causes of abdominal paradox include a large pleural effusion, negative pressure pneumothorax, subphrenic abscess, pulmonary fibrosis, and atelectasis. Abdominal paradox can also be seen in patients who have undergone lobectomy. These pre-existing conditions can be identified on a chest radiograph.

Many patients presenting for shoulder surgery may have asymptomatic unilateral diaphragm dysfunction. However, after interscalene nerve block resulting in hemidiaphragm paralysis, such patients may develop dyspnea severe enough to warrant rescheduling their surgery.

In conclusion, ultrasound of the diaphragm is a practical and highly accurate diagnostic imaging modality to assess diaphragm function, to determine which patients may be candidates for interscalene brachial plexus blocks and to quantify diaphragm contractibility prior to extubation.