The European Society of Anaesthesiology & Pain Therapy (ESRA) Ambassador Program: Establishing a “Lingua Franca” Across Europe and the World

From early days to modern times, pain was, is, and will continue to be the most feared experience of the human race. As we continue to understand pain and how it is processed in the human mind, oftentimes we neglect to recognize that its expression is heavily influenced by cultural, ethnic, and regional heritage. These factors may explain why a simple appendectomy requires only acetaminophen for postoperative pain management versus heavy opioid consumption in different parts of the world or by what miracle a 90-year-old grandma, who lost 3 inches of height to compression fractures, still dances at her great-grandson’s wedding while a 50-year-old 1,000 miles away is confined to her bed because of morbid obesity and severe osteoarthritis.

Early on in our medical training, we are taught that every patient is unique. He or she may have variable presentations for the same disease or respond differently to the same medication. This is especially true for many of our chronic pain syndromes. It is interesting to observe how pain is managed in different parts of the world, specifically in Europe, where each of these countries have different views, expressions, and treatment patterns for pain management. In an attempt to establish a better communication—a “Lingua Franca” (a common language between physicians across Europe in the field of regional anesthesia and pain medicine)—the European Society of Regional Anaesthesia & Pain Therapy (ESRA) introduced the Ambassador Program, currently led by Dr Marc Van De Velde. His commitment and involvement in this initiative have enhanced the education and training of physicians to be experts in regional anesthesia and acute and chronic pain management.

ESRA was formed in the early 1980s. The society has been hugely successful in teaching and promoting the use of regional anesthesia and pain management in Europe. However, uptake of regional anesthesia and pain therapy has been variable throughout Europe because of different health care systems and historical, social, and political reasons. Access to the required equipment and technology, along with a lack of teaching, further limited its widespread use, especially in former Eastern European countries.

Soon after ESRA was formed, a so-called “Ambassador Program” was initiated in the 1990s. The remit of this program was to facilitate teaching and training in regional anesthesia and pain medicine in parts of Europe in which uptake was low. In addition, the goal was to involve anesthesiologists from these countries to participate and become more actively involved with ESRA in various ways. Slobodan Gligorijevic, former ESRA president, led the Ambassador Program for several years, followed by his successor, Marc Van de Velde. Patrick Narchii will be the next chair of the Ambassador Program for 2017.

The program helped develop and financially supported scientific meetings in various Eastern European countries such as Poland, Slovenia, Croatia, and the Baltic States. Cadaver courses were initiated in Ljubljana. However, uptake of regional anesthesia remained fairly limited despite the huge success of these meetings. The ESRA Council and Board realized that more was needed. A system was set up to not only start up regional anesthesia locally but also to permanently anchor a system of teaching and support. A local ESRA-affiliated regional anesthesia and pain therapy society was formed in Eastern European countries; the newly formed professional association followed ESRA organization bylaws, board, and democratic structure. Interested anesthesiologists, usually from academic institutes, were approached to initiate collaborative efforts. Once a democratic structure was in place, an inaugural meeting was held. The formation of a society/zone was supported by the ESRA Secretary General and the ESRA office to guarantee uniform bylaws throughout different zones. ESRA provided financial support to organize the first inaugural meeting. Additional funds retained by participants registration remained with the local society and created a start-up fund. All participants to the local inaugural meeting received a free ESRA membership, including all benefits for 1 year. Each newly formed zone could send a democratically elected representative to the ESRA council.

Many new zones were created, such as Slovenia, Croatia, the Baltic States, Romania, and Slovakia, and discussions to form other new zones are currently ongoing with Serbia, Russia, Ukraine, Kazakhstan, and Bulgaria. This allowed more than 800 new members to get involved with ESRA and obtain access to various benefits such as the regional anesthesia and pain medicine ESRA grant system and reduced registration fees for ESRA-organized meetings.

One of the most successful new zones was the Romanian Association of Regional Anesthesia and Pain Therapy (ARAR), which was established in 2016. Following the registration of the ARAR bylaws, the inaugural meeting of the new zone was held in Cluj Napoca. More than 250 participants registered for a 3-day meeting with participation of local and international faculty and included state-of-the-art lectures and hands-on workshops. In 2017, this meeting was repeated and turned out to be even more successful (Figures 1–3). 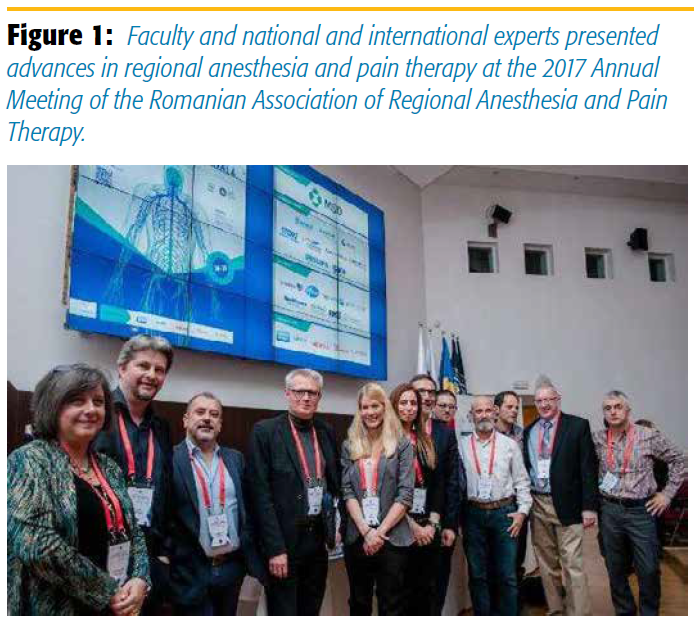 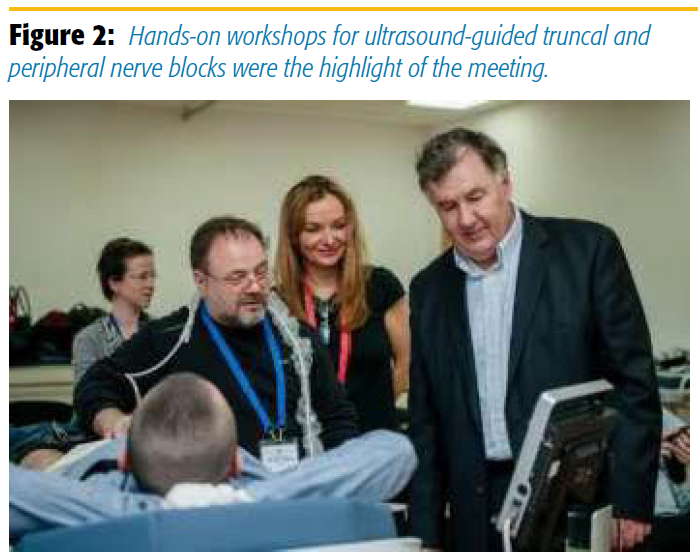 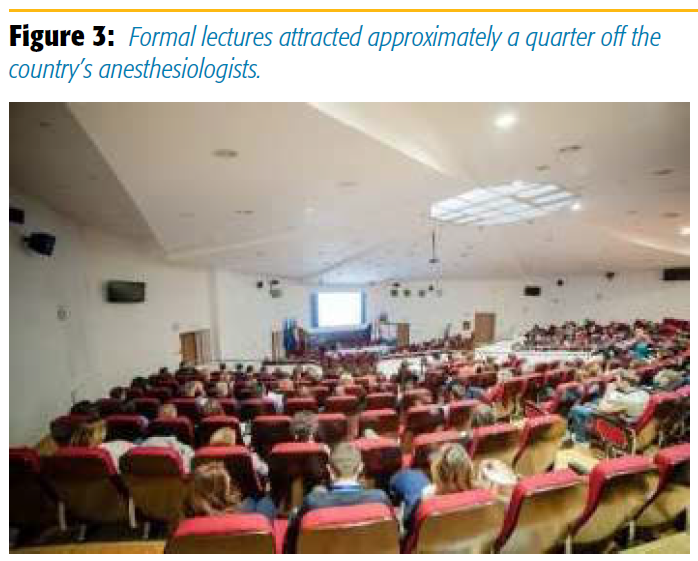 In the future, the goal is to have all European countries involved in ESRA and expand to certain countries at the boundaries of Europe such as North African Countries and the Middle East. Knowledge, skill, and the art of regional anesthesia and pain medicine are important aspects of the anesthesiology practice. The ESRA Ambassador Program was designed to help countries across Europe increase utilization of regional anesthesia and pain management therapies. The program has been highly successful, with many anesthesiologists contributing to the mission over the past decade.

“The remit of this program was to facilitate teaching and training in regional anesthesia and pain medicine in parts of Europe in which uptake was low.”

In a medium-sized country like Romania, formerly of the Eastern Bloc, there are 1,600 registered anesthesiologists serving a population of 18 million. In 2016, the ESRA Ambassador Program supported the initiative to create the ARAR. One of the main purposes of creating this national society was to provide Romanian anesthesiologists with evidence-based medicine and practice guidelines that are currently endorsed in other European countries and the world. The inaugural symposium of the society was greeted with great interest from the Romanian anesthesiologists, with more than 260 participants. The support from ESRA and quality of the scientific program along with a large number of workshops were factors that resulted in the success of the meeting. The 2017 meeting almost doubled, with 420 participants. There were 15 international speakers and 17 national experts, with a total of 43 lectures divided in 10 panels and 15 workshops with nine different topics, covering regional anesthesia, from basic anatomy to advanced procedures. New for 2017 was the introduction of interventional chronic pain therapies, a domain of great novelty for Romania, where pain practitioners are nonexistent as a specialty. The feedback from the participants was encouraging, and the ARAR seemed to have taken valuable first steps in establishing a solid organization built upon ESRA’s goals to improve regional anesthesia and pain management clinical practice, education, and scholarly prospects within the country. The excellent collaboration between local and European leadership as well as the enthusiasm and personal involvement of the chairman of the Ambassador Program Committee, Professor Marc van De Velde, also contributed to the success of the meeting.

The scholarly interest was genuine, and participants were extremely active with questions and comments during the sessions and workshops. Despite the enthusiasm, one of the main challenges at the moment seems to be the lower income of the practitioners as well as lack of financial support from the institutions in the postgraduate education. With the joint efforts of ARAR and ESRA, we hope to find a pertinent solution to this problem and offer quality education in regional anesthesia and pain management at affordable prices.

On a more particular note, many participants were intrigued by the topics presented during chronic pain sessions. While regional anesthesia is well taught during the anesthesiology residency, chronic pain teachings are little if at all present in the academic curriculum; in addition, interventional pain management is very little represented as a clinical practice in Romania, with only a handful of anesthesiologists, most trained in Europe or the United States, currently engaging in performing routine procedures to treat patients with chronic pain. Gauging the participants’ interest, perhaps it may be possible, with ESRA’s help and guidance, through education and standardized protocols, to overcome several hardships that are inherent in countries like Romania and develop robust best practices guidelines for implementing acute and chronic pain treatments in clinical and academic practice.

As a new generation of physicians is formed worldwide with the clear concept of the fact that they are citizens and physicians of the world, the select professional skills that these highly trained physicians should possess may need to be consistent and evidence based. Aligning clinical practice, education, and research to a common denominator worldwide, a modern day “Lingua Franca” would allow better and faster progress in all sections of regional anesthesia and pain medicine practice, whether clinical or scholarly work.