A nesthesiologists have long debated the utility of neuraxial techniques in cardiac surgery. This approach continues to be explored as the field of cardiac anesthesia trends away from high-dose opioid regimens and toward balanced techniques that allow for expedited recoveries.[1] Increasing data support the efficacy of thoracic epidural analgesia (TEA) and intrathecal analgesia as beneficial components of these fast-track approaches. However, unique considerations in cardiac surgery patients, such as the requirement for full anticoagulation to facilitate cardiopulmonary bypass, continue to limit their application in this area. The risks associated with neuraxial techniques in this setting have potentially devastating consequences, but at the same time, they occur infrequently enough that an accurate incidence remains difficult to establish. As discussed in this review, such uncertainty is a defining feature in the debate about the application of neuraxial analgesia in cardiac surgery.

“Despite growing evidence for the efficacy of neuraxial analgesia, many anesthesiologists remain hesitant to use these approaches based on some unique considerations in the cardiac surgery population.” 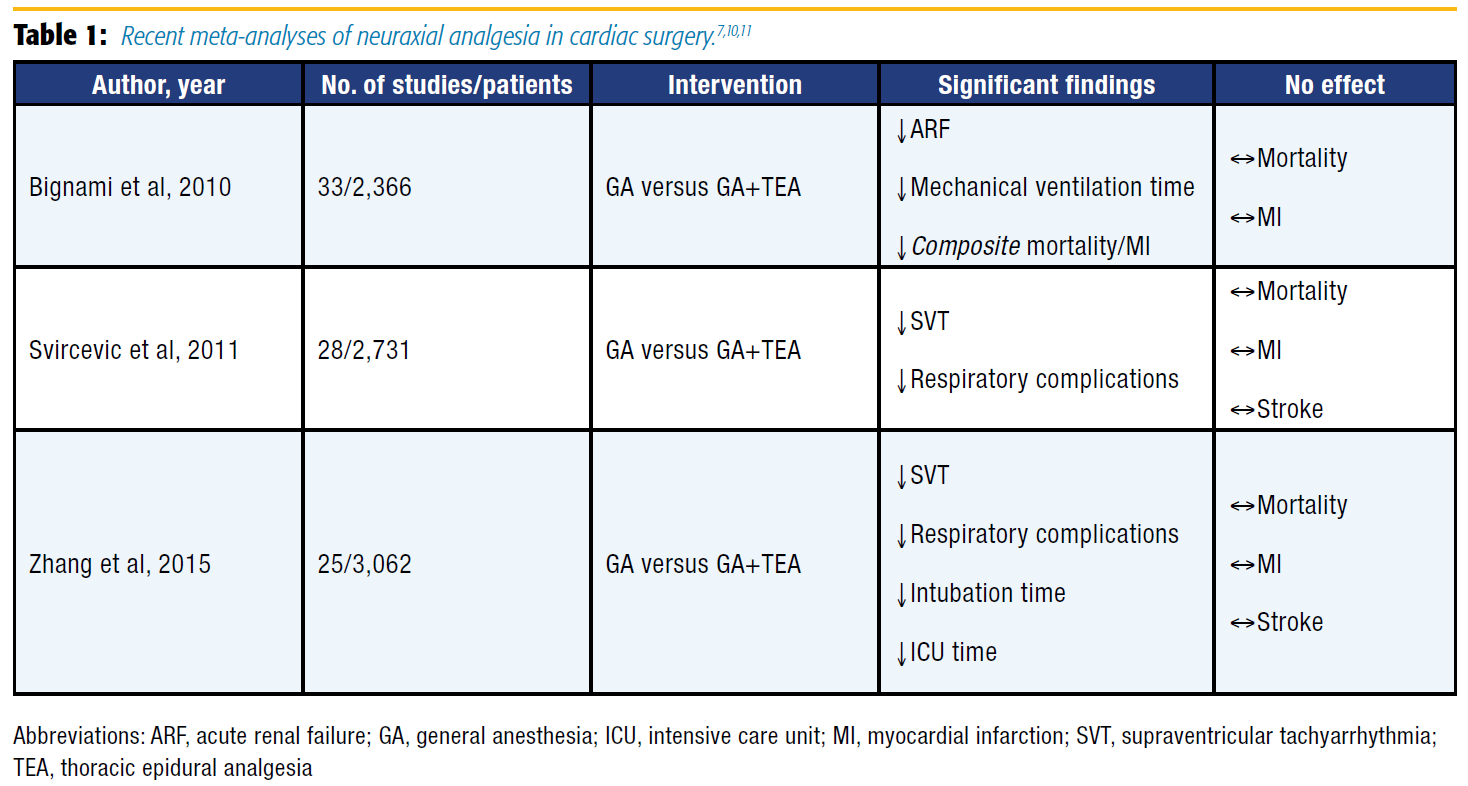 The improvements in myocardial oxygen balance may extend beyond sympathectomy and may also result from the excellent pain control afforded by neuraxial analgesia. Improvements in postoperative pain scores and opioid requirements have been demonstrated with TEA over GA alone.[9-10] Improved analgesia likely contributes to reductions in mechanical ventilation time and respiratory complications as well.[7],[10],[11]

The extreme application of neuraxial analgesia in this context is to perform cardiac surgery without general anesthesia.[12-13] Until recently, most of the reported cases were for single-vessel, off-pump CABG surgeries because of the limited options for graft harvesting sites under neuraxial anesthesia. However, Watanabe et al[14] published data from a large series of awake patients undergoing off-pump CABG for which multiple vessels could be grafted through advancements in surgical technique and regional anesthesia. For example, radial artery grafts were harvested by either extending neuraxial blockade to a C5 level or through brachial plexus nerve blocks. Additionally, epidural anesthesia could be extended inferiorly to cover incisions for gastroepiploic artery harvesting. The avoidance of general anesthesia certainly has the potential to enhance recovery and improve outcomes after cardiac surgery.

In recent years, multiple meta-analyses assessing the efficacy of TEA in cardiac surgery have been published (Table 1), as well as a large Cochrane review.[7],[10],[11],[15] No clear mortality benefit has been shown, but other endpoints demonstrate advantages associated with the application of TEA for cardiac surgery. For example, a meta-analysis by Bignami et al[11] found that TEA with GA compared favorably with GA alone and resulted in a reduced incidence of acute renal failure and duration of mechanical ventilation. Notably, the composite endpoint of mortality and myocardial infarction (MI) was reduced, but the study was underpowered to detect a benefit when these endpoints were considered individually. More recently, Zhang et al[10] published a meta-analysis showing that the addition of TEA over GA alone decreased the risk of respiratory complications, SVT, time to extubation, and length of stay in the intensive care unit (ICU).

With respect to spinal analgesia for cardiac surgery, a metaanalysis by Zangrillo et al[16] found no difference in outcomes, including mortality, perioperative MI, and length of hospital stay. However, only 1 of the 25 studies used local anesthetic in the intrathecal dosing regimen. The other studies administered intrathecal opioid alone or in combination with clonidine.

Despite growing evidence for the efficacy of neuraxial analgesia, many anesthesiologists remain hesitant to use these approaches based on some unique considerations in the cardiac surgery population. In particular, full heparinization generates increased concerns about epidural hematoma and the devastating possibility of paraplegia. Additional complicating factors include the risk of post-CPB coagulopathy and the fact that medical management for many of those patients includes antiplatelet therapy. In fact, concurrent aspirin use with systemic heparinization is a known risk factor for epidural hematoma after neuraxial instrumentation.[17]

Given the paucity of data to estimate risk of hematoma formation, many anesthesiologists who currently place epidural catheters for cardiac surgery remain abundantly cautious. Typical recommendation for initiating systemic heparin regimens after neuraxial instrumentation is to delay at least 1 hour after the procedure.[17] In contrast, considering the full anticoagulation required for cardiopulmonary bypass, many anesthesiologists will place epidural catheters only on the day prior to cardiac surgery and will insist that surgery be delayed at least 24 hours in the event of bloody attempts.[20] This approach to traumatic insertion was published by the American Society of Regional Anesthesia and Pain Medicine in the most recent guidelines for regional anesthesia in patients receiving antithrombotic therapy (Table 2).[17] Unfortunately, these practice patterns are prohibitive for institutions that use same-day admit surgery. With respect to resource management, delaying surgery by 24 hours in the event of traumatic neuraxial attempts is inefficient for operating room use and adds costs secondary to prolonged hospitalizations. This reality has likely played a key role in limiting the application of neuraxial analgesia to cardiac surgery, particularly in the United States.

In addition to bleeding risks and delayed surgery, hypotension is another potential deterrent for anesthesiologists considering neuraxial techniques in this population. During the pre-CPB period, the hemodynamics associated with many of the pathologies that will, by definition, be encountered in cardiac surgery might not tolerate the sympathectomy associated with neuraxial blockade. Additionally, hypotension during the post-CPB period is relatively common and potentially quite profound, and certain etiologies, such as vasoplegia syndrome and myocardial stunning, might be exacerbated by any degree of sympathectomy. Overall, this aspect of neuraxial analgesia in cardiac surgery has received a limited amount of investigation.[21]

Overall, growing evidence supports the benefits of neuraxial analgesia in cardiac surgery, including the attenuation of stress responses, improvements in myocardial perfusion, and superior pain control with reduced opioid requirements. Potential clinical benefits include reduced pulmonary complications, renal injury, and arrhythmias, as well as earlier extubation and shorter ICU stays. However, no clear mortality data support the use of neuraxial techniques in this setting.

Meanwhile, the risk of spinal cord injury from hematoma remains somewhat unclear, and evidence is limited and conflicting for the hemodynamic impacts of neuraxial blockade in these patients. As such, the application of neuraxial analgesia to cardiac surgery remains controversial until more definitive evidence becomes available.

Therefore, optimal patient selection is recommended when considering neuraxial techniques, and the risk factors for epidural hematoma and hemodynamic instability must be considered for each patient before pursuing any type of neuraxial blockade. It is also important for anesthesiologists to continue to optimize perioperative analgesic regimens through the application of thoughtful multimodal approaches (eg, acetaminophen, sternal blocks).