Continuous peripheral nerve blockade provides analgesia for a variety of surgical procedures. For decades, there were only three basic local anesthetic administration strategies possible: (1) a continuous infusion; (2) continuous infusion combined with patient-controlled bolus doses; and, (3) patient-controlled bolus doses without a continuous infusion. However, with the advent of new infusion pumps allowing a programmed bolus dose to be administered at regular intervals without patient intervention, a host of new possible combinations has become possible. However, a consensus has yet to evolve regarding the desirability of using automated repeated bolus administration (ABA). In this article, we will review the available data provided from randomized, controlled clinical trials.

While ABA had been described previously for epidural administration, Taboada et al1-2 were the first to report this technique for catheters inserted adjacent to a peripheral nerve. These investigators compared ABA to continuous infusion for peripheral blockade of the sciatic nerve in patients undergoing hallux valgus repair.1-2 In these two studies, nonstimulating catheters were inserted 5 cm beyond the stimulating needle tip without ultrasonography and subjects were subsequently randomized to receive one of two possible infusion strategies. In the first investigation, pain was lower to a statistically significant degree in the group receiving ABA up to 12 hours postoperatively.1 In a subsequent trial, a second infusion pump delivering patient-controlled bolus doses was added to the primary delivery regimen.2 With this regimen, differences in pain scores between the two treatments did not reach statistical significance, but consumption of local anesthetic was lower in the ABA group. These two initial reports led to optimism that repeated bolus doses would prove superior to the commonly used basal infusion.

Fibla et al7 studied the analgesic quality of both infusion methods in paravertebral nerve blocks after thoracotomy. The study population included patients scheduled to undergo an anterior or a posterolateral thoracotomy for pulmonary resection. Mean pain scores throughout the 72 hours postoperatively and need for rescue analgesia were no different between both groups. However, visual analogue scores for pain were only slightly lower in the ABA group at 48 hours. 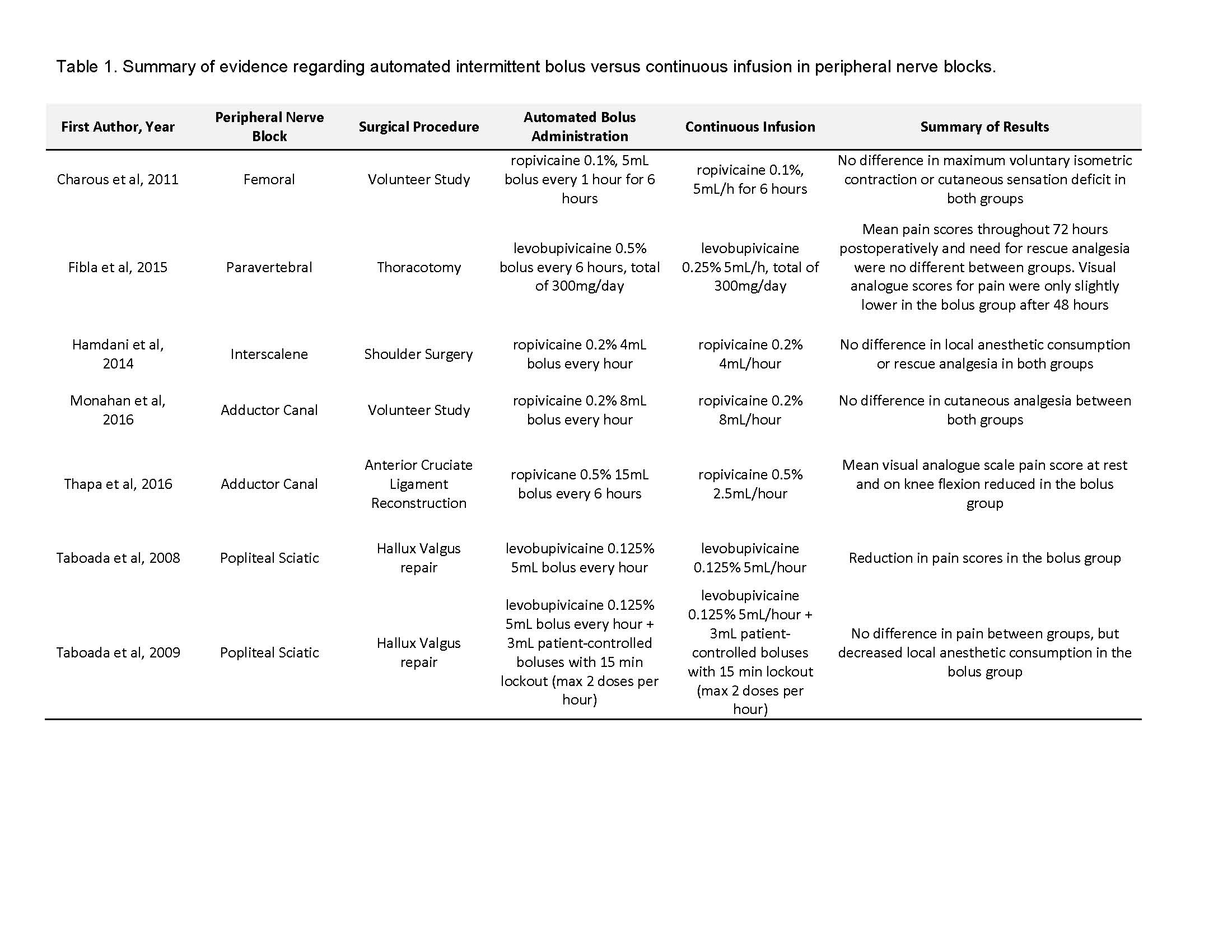 One explanation for the differences among studies may be related to the accuracy of catheter insertion, as evidenced by the different outcomes produced by blocks performed via nerve stimulation versus ultrasound guidance. During placement of the catheter via nerve stimulation for the studies of the sciatic nerve, the final position of the tip may actually be distant from the targeted nerve (catheter tip location relative to nerve was not confirmed under ultrasonography).1-2 Therefore, less local anesthetic may theoretically reach the sciatic nerve with a continuous infusion when compared to intermittent boluses if the latter produces a higher pressure to help overcome the anatomic distance between the tip and the sciatic nerve. This then raises the question of whether the benefits of superior analgesia or decreased local anesthetic consumption will still be present when catheters are placed via ultrasound guidance, in which the final tip location may be confirmed to be in an optimal position. In the studies that demonstrated negative results, all blocks and catheter tips were confirmed via ultrasonography,3–5,7 and therefore, the positive effects seen when catheters were “blindly” placed may no longer be present. Another explanation for the conflicting results could be related to anatomic differences of catheter insertion. For example, when comparing the anatomy of sciatic versus femoral nerve regions, the latter may allow better containment of local anesthetic between the iliac fascia and underlying muscle, keeping the local anesthetic in better contact with the femoral nerve. Therefore, benefits of a (presumably) higher pressure injection introduced by ABA may not be apparent for this target nerve.

Methodologic variations among studies might also account for differences among findings. For example, the bolus regimen lacked uniformity across studies (Table 1). In regard to studies involving adductor canal blocks, negative effects were seen in the study of Monahan et al,5 while positive effects were seen in that of Thapa et al6 ; however, the latter study used a higher concentration of anesthetic (Ropivacaine 0.5% vs 0.2%). In addition, Thapa et al6 studied postoperative pain in surgical patients, while the former study investigated volunteer subjects. These are two very different study populations and two different primary outcomes of interest (postoperative pain vs cutaneous sensory deficit). In addition, there was mild improvement in pain scores at 48 hours in the study comparing infusion methods in thoracotomies.7 However, although total dosage of local anesthetic was equal in both groups, the ABA group had a higher concentration of local anesthetic (Levobupivacaine 0.5% vs 0.25%). This may explain the minimal positive results in the ABA group and, thus, makes interpretation of any benefit of ABA difficult.

An important question to consider is what is the optimal bolus dose/volume/interval for ABA to ascertain positive effects from this administration method. For example, the currently published studies may not have used large enough boluses: most used an ABA method in which a single bolus dose was given every hour.3–5 However, Thapa et al6 bolused 15 mL every 6 hours (instead of a lower volume every hour). Indeed, they demonstrated positive effects with ABA. Unfortunately, an unpublished study by Khaitibi et al, using TAP catheters, similarly used a very large bolus (24 mL) every 3 hours, yet yielded negative results versus an 8 mL/hour continuous infusion. Additional data will hopefully be produced by a clinical trial in progress (clinicaltrial.gov NCT02539628) comparing 21 mL of Ropivacaine 0.2% every 3 hours versus a 7 mL/hour basal infusion.

In summary, there have been conflicting results on the added benefits of an ABA infusion method compared to continuous infusion. Some studies suggest superior analgesia,1,2,6 while others demonstrated no difference.3–5 The reasons for the differences in the results are unclear; however, possible explanations include major differences between the study protocols, contrasting effects on different target nerves, and technical aspects associated with nerve stimulation and ultrasound guidance. Whether or not ABA provides superior analgesia or reduced motor blockade remains unclear, and it is hoped that further studies using various bolus regimens will bring clarity to this important issue.