Radiofrequency ablation has been extensively used in a variety of pain conditions. Its first recorded use for pain management was in 1932 for the treatment of trigeminal neuralgia.1 Since then, millions of patients suffering from back and neck pain, discogenic pain, knee and hip pain, or sacroiliac dysfunction have benefited from conventional thermal or watercooled radiofrequency technology. More recently, pain from bone metastases also have been effectively treated with this technology.

Metastatic bone disease in cancer patients is frequently associated with primary tumors of the breast, prostate, and lung. Pain from bone metastases results in poor quality of life. Historically, the conservative treatment of painful spinal metastases relied on opioid analgesics or palliative radiation. Radiofrequency ablation, which can be combined with vertebral augmentation, is an emerging mode of analgesic therapy for osseous metastases that cannot be or are incompletely palliated with radiation therapy. We describe two radiofrequency systems for ablation of a metastatic vertebral body lesion, DFINE’s STAR and Medtronic’s OsteoCool radiofrequency ablation systems (Table 1).

The DFINE spinal tumor ablation with radiofrequency (STAR) system and the OsteoCool radiofrequency ablation system are minimally invasive techniques for the palliative treatment of painful metastatic spinal lesions. The STAR ablation system received US Food and Drug Administration (FDA) 510(k) clearance in 2012. OsteoCool was cleared in November 2015 and then introduced into clinical practice in January 2016. Thoracic, lumbar, and sacral vertebral body lesions are ideal targets for treatment, although pedicle lesions also can be treated. The devices cannot be used in patients with cardiac pacemakers or other electronic device implants. Use of these devices is contraindicated in patients with cervical (C1–C7) vertebral lesions. This procedure may be particularly useful for patients with radioresistant tumors, recurrent pain after radiation therapy, or posterior vertebral body metastatic tumors, and in patients who have reached the maximum limit of radiation dose. 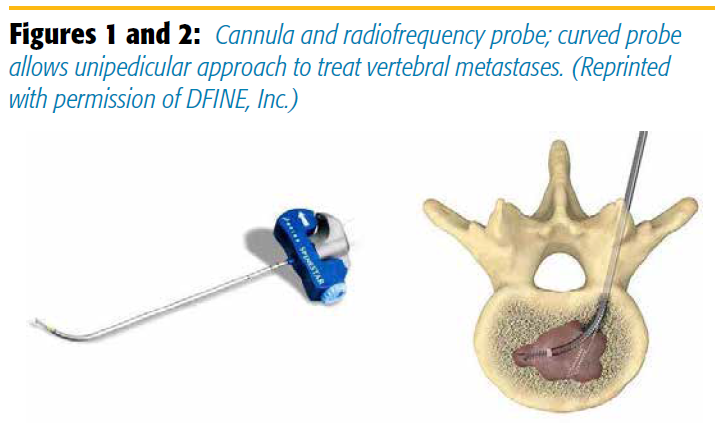 A biopsy can be obtained through the same needle used for ablation. Augmentation with cement fills the void created by the ablation and provides stabilization for a vertebral compression fracture.

Ablation is typically performed in a patient under moderate conscious sedation in the prone position via a transpedicular or paraspinous approach. In the DFINE system, an introducer cannula is placed into the affected vertebral body and docked near the lesion. The STAR ablation instrument is then inserted through the cannula into the lesion. The DFINE STAR system depends on conventional radiofrequency ablation. Because of a curved tip and steering capabilities, the procedure can be performed from one side (unipedicular) for navigation throughout the vertebral body (Figures 1 and 2). A bipedicular approach can also be used depending on the size and location of the lesion. Once the STAR ablation instrument is positioned within the center of the lesion, the ablation electrode is extended and radiofrequency energy is delivered. Two thermocouples within the ablation system monitor the temperature within the tumor in real time. An ablation zone can be 3 × 2 cm or 2 × 1.5 cm. The zone depends on the location of the thermocouples (10/15 mm from the center of the ablation zone or 5/10 mm) (Figure 3). Once the temperature reaches 50°C in the proximal thermocouple (the temperature at the most peripheral point of the ablation zone), the delivery of energy is discontinued. As with conventional radiofrequency ablation, repositioning of the ablation instrument may be needed to target another component of the lesion. Multiple ablation zones are typically created to cover the lesion as much as safely possible. After DFINE ablation, vertebral augmentation can be performed with direct deposit of cement through the cannula as per routine vertebroplasty. 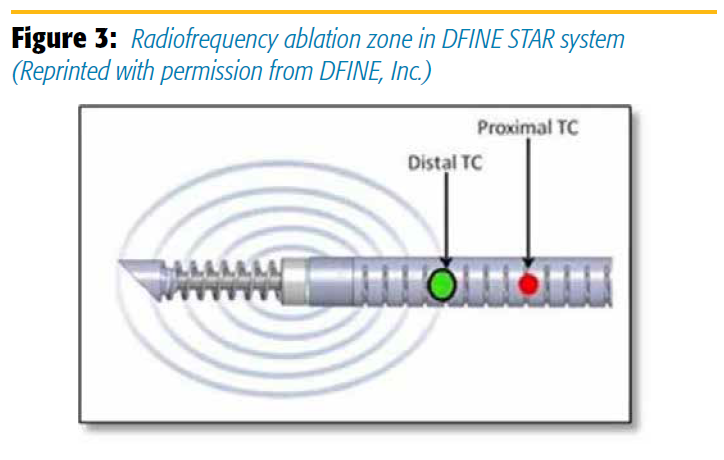 The OsteoCool has two internally water-cooled bipolar probes that are heated to 70°C to prevent charring. Because of the two probes, heat synergistically extends into the tumor and creates a spherical lesion bigger than the one created by a conventional probe. Since the probes are continuously cooled, the temperature is constant around them and, thus, char formation is reduced (Figure 4). The heat from the probes ablates most of the metastatic vertebral tumor which, in some cases, involves the entire vertebral body. Specificity in heat lesioning time and intensity through the OsteoCool system depends on the probe size (7 mm, 10 mm, or 20 mm) (Figure 5). 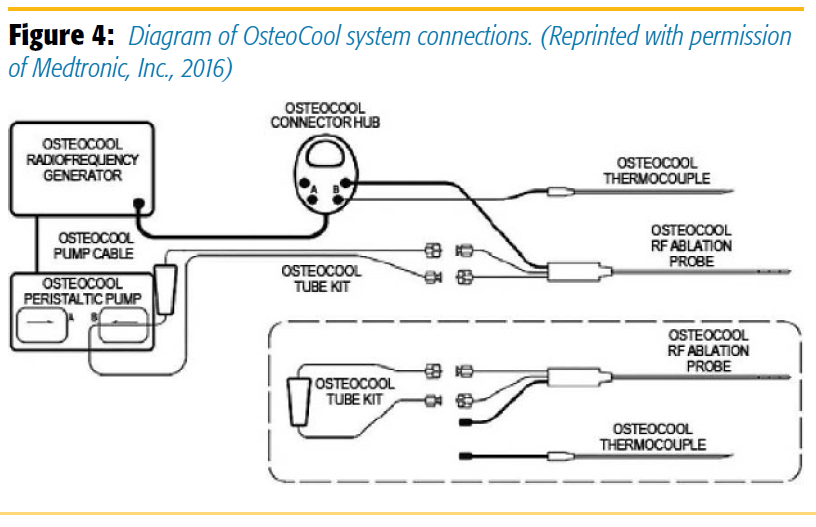 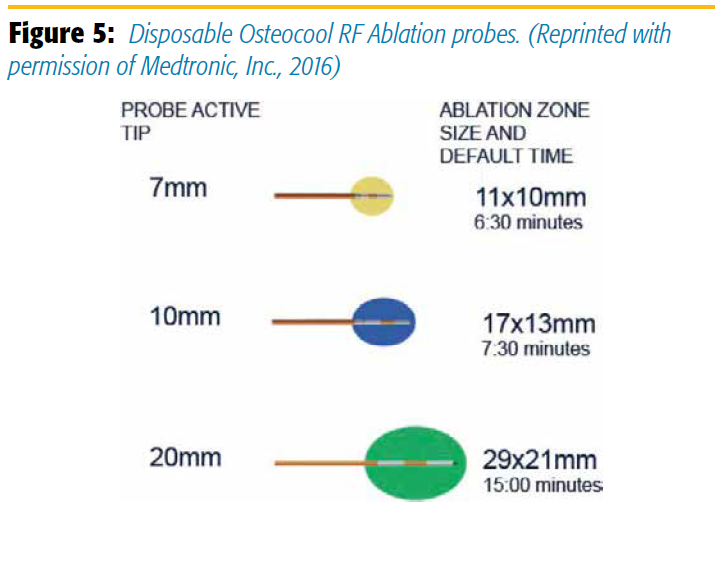 With OsteoCool, the procedure starts in a prone patient under mild to moderate conscious sedation and with extensive local anesthetic infiltration of the subcutaneous tissue and periosteum. To access the vertebral bone, the OsteoCool bone access kit is needed. The kit has Kyphon-equivalent sizes (8G, 10G, 13 G) for location of the lesion. After routine drilling and bone biopsy, radiofrequency probes are placed in the two trocars. For convenience, the drill in the OsteoCool bone access kit is marked at the level of exit from the trocar and color coded to correspond to the lesion intended. The company recommends upgrading to the bigger size: if the color-coded drill falls between the 7-mm yellow marking and the 10-mm blue marking, use the 10-mm probe. We, however, downgrade to the smaller size if the tumors treated are too close to vertebral body walls. A thermocouple probe can be placed via a transforaminal approach at the level of fracture to monitor the temperature around the spinal nerves (Figure 6).

Because of the built-in safety features, a physician can identify the optimal position for ablation from anteroposterior and lateral views. Thus, once placed in the vertebral body, the tip of the styletted trocar ensures a safe posterior margin of the lesion during ablation; the tip of the probe ensures the anterior margin of the lesion (Figure 7). 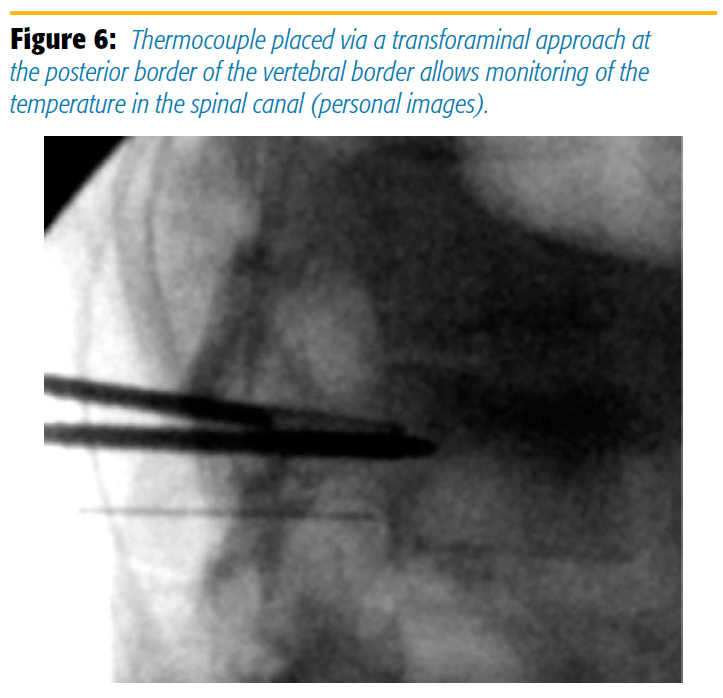 With the simulation app, an interesting feature of the OsteoCool system, a practitioner can identify the best trajectory, lesioning, and probe selection by using an image (computed tomography, magnetic resonance imaging) of the metastatic disease. Once imaging studies are obtained, they are uploaded by the practitioner into a special application that displays the lesion three dimensionally and a needle trajectory in simulation of the procedure. A real-time virtual reality robot also is available to improve the technique in challenging cases.

Once the probes are placed and the water-cooled system is connected, a single application of radiofrequency at 70°C ablates the tumor. Ablation success depends on time, probe size, and destruction of local nociceptors. A cavity is created that is subsequently filled with cement via a routine kyphoplasty. No additional repositioning or cleaning of char from the probe is necessary. Pain relief is immediate, and patients are discharged home the same day. The temperature close to the electrodes, often placed in the middle of the tumor, can be 20°–25° higher than the temperature recorded at the thermocouple tip (Figure 8).

Performed in an outpatient setting, both procedures are safe and relatively simple. One consequence of radiofrequency ablation is damage to surrounding tissues. Nerves can be injured by thermal effects or direct puncture of nerve roots or cord, which may result in radiculopathy or paralysis. Also possible is vascular injury or a dural tear. In the thoracic spine, a hemothorax or pneumothorax may result if the pleural cavity is breached. With OsteoCool, owing to creation of a significantly bigger lesion, these complications may occur especially if the tumor is in close proximity to the vertebral wall. However, the system has a built-in safety feature that shuts down the system if the vertebral wall is breached as recorded by a sudden change in impedance (Figure 9). While we have not faced any of these aforementioned complications with either system, published case reports have described such complications.

In a multicenter retrospective study of DFINE STAR used to treat 128 lesions in 92 patients (for whom radiation therapy had failed), pain was decreased by 77%.2 In a prospective study of treatment of 69 lesions in 50 patients, mean scores for pain improved significantly as did quality of life immediately after the procedure to days 3, 7, 30, and 90.3 In a study of local control of metastatic tumor via ablation, the tumor control rate was 89% at 3 months and 70% at 1 year after treatment in 46 patients.4

There are no published clinical studies using the OsteoCool system. Data from other applications of water-cooled radiofrequency ablation abound describing the effectiveness and superiority of the technique.5-6 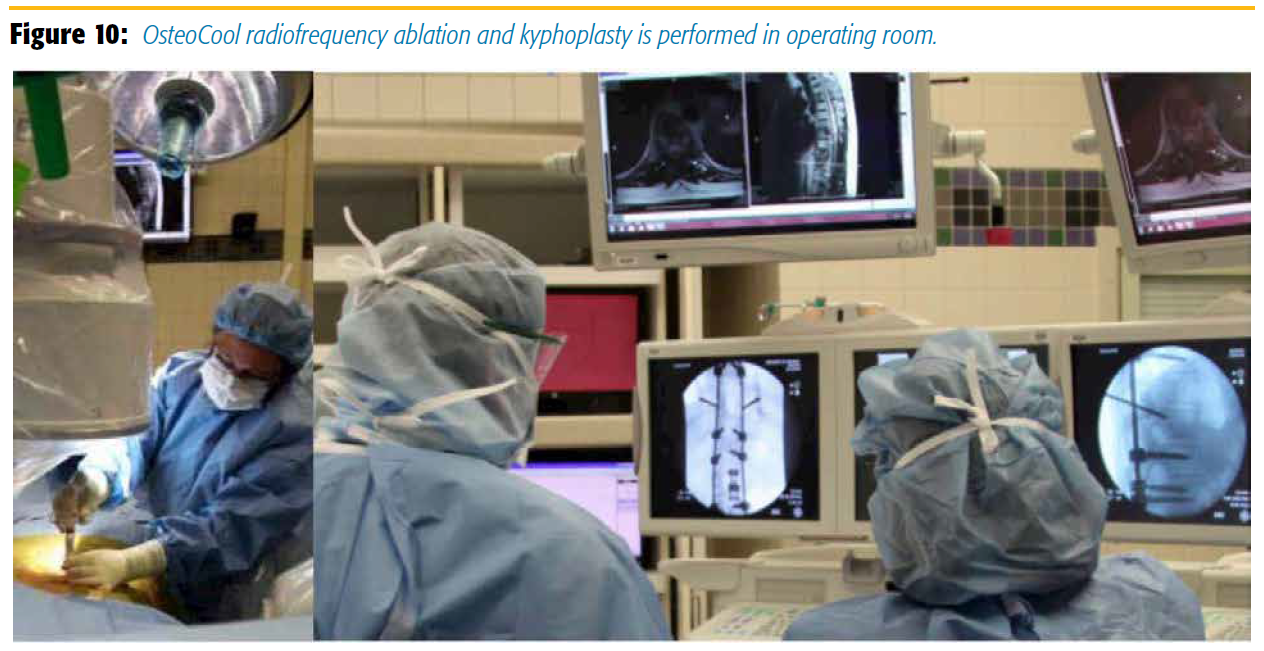 Our experience at the University of Chicago pain clinic, using the OsteoCool system, has been positive (Figures 10 and 11). The patients who benefited the most from this procedure were the ones with pain from spinal tumor progression and metastases in an area that had been treated with a maximal radiation dose.7 Differentiation between osteolytic lesions and osteoblastic ones may be important for determining bone access and lesioning size. The constant high temperature of the OsteoCool system may be an advantage in osteoblastic lesions, which are more consistently mapped than lesions exposed to temperature variation, char formation, and unevenness as in the conventional radiofrequency. We have not treated diseased pedicles so far but, at least in the lumbar spine osteoblastic metastatic lesions, OsteoCool may also offer a theoretical advantage. Treatment of the mid or high thoracic pedicles may be reserved for radiation therapy, as pedicle fracture can occur via the intrapedicular approach with a vertebral augmentation trocar. 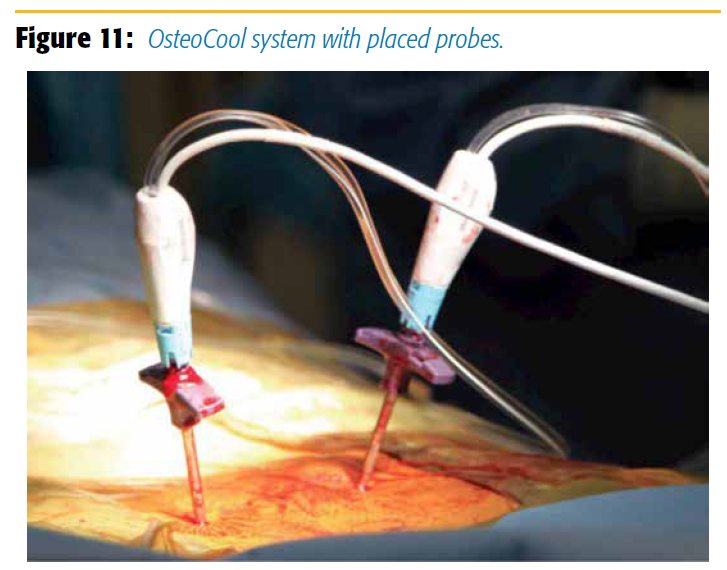 Use of vertebral body radiofrequency ablation is a novel technology. There are now at least two manufacturers who can help clinicians treat difficult and refractory spinal pain with almost instantaneous relief. Differences may exist between the two products, but both are associated with excellent clinical outcomes. Those techniques may be especially important in patients whose improved functional status allows them to be considered for further chemotherapy. Additional studies may help delineate specific indications for each of the products and are currently ongoing.