Small-bore connections (defined as having an inner diameter less than 8.5 mm) are commonly encountered in health care applications. From the manufacturing, compatibility, and ease-of-use standpoints, it is obviously desirable to standardize such connections. A formative step in the standardization of small-bore connections occurred when Hermann Luer of Paris, France, filed a patent for a precise syringe design with the United States Patent Office in 1897.1 His design was subsequently modified by Farleigh S. Dickinson and the Becton Dickinson company into the ubiquitous modern Luer-Lok (known generically as “Luer-lock” or often simply “Luer”) connection. This design provides a secure and reliable small-bore connection that is easy to attach and detach. The Luer connection has emerged as the industry leader and has been extensively used for intravascular, neuraxial, enteral, medical gas, and monitoring applications.

Unfortunately, the convenience and near-universal adoption of the Luer connection presents the opportunity for a multitude of misconnection/wrong-route administration incidents.2 The use of Luer connections on blood pressure cuffs is an obvious opportunity for misconnection (with activation of a noninvasive blood pressure monitor connected to intravenous access potentially resulting in the intravenous administration of a 900-mL bolus of air within 30 seconds).3 An even greater—and certainly underreported—problem is the risk of wrong-route administration of medications made possible by the use of identical connections for very different targeted applications (eg, the use of Luer connections for both epidural and intravenous catheters). In this regard, reports can be found for the inadvertent neuraxial administration of virtually any drug intended for intravenous administration (with sometimes catastrophic consequences, as in the case of tranexamic acid).4 Conversely, there are reports of drugs intended for neuraxial administration being accidentally administered intravenously (such as bupivacaine resulting in a maternal death).5 While not causative, the Luer connection system has been identified in root cause analysis to enable such preventable events. A recent review of obstetric neuraxial drug administration errors suggested that the use of non–Luer lock connectors on all epidural/spinal/ combined spinal-epidural devices has “the potential to prevent all of the errors identified in the published case reports.”6 The recognized role of Luer connections in accidental cross-connections between applications has resulted in growing calls for improving an avoidably hazardous situation.

The International Organization for Standardization (ISO) is an independent, nongovernmental organization based in Geneva, Switzerland, and is the world’s largest developer of international standards. In response to the need to create safer standard medical connections, the ISO formed a working group representing 31 countries. The group of standards for small-bore connectors for medical use is known as the ISO 80369 series and addresses connectors for the following:

The familiar Luer connection will continue to be used and dedicated to intravascular and hypodermic applications (ISO 80369-7), with new connections developed for the other applications. The ISO standard for 80369-6 was published on March 15, 2016 (thereby becoming ISO 80369-6:2016). This connector for neuraxial and major regional anesthesia (designated “NRFit” and pronounced “ner-fit”) looks like a Luer connector, but is 20% smaller, and has unique design features that reduce cross-connections, especially with Luer connectors (Figure 1). NRFit connectors have undergone a rigorous validation process and are considered to be functionally equivalent to conventional Luer connections.

There is no formal timeline for transition from Luer to NRFit connections. Facilities can transition to the new connectors at their own pace, and there is no manufacturers’ timeline for discontinuation of Luer connections for epidural/major regional use (B. Braun Medical, Inc., personal communication, October 2016). 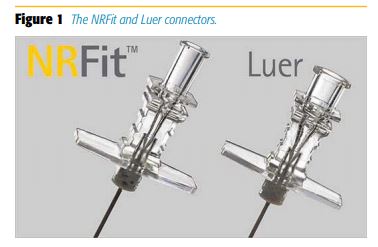 However, NRFit connections are now commercially available and as of January 1, 2017, their use will be mandated in the state of California. California law (AB 444) states: Commencing January 1, 2017, a health facility, as defined in subdivision (a), (b), (c), or (f) of Section 1250, is prohibited from using an epidural connector that would fit into a connector other than the type it was intended for, unless an emergency or urgent situation exists and the prohibition would impair the ability to provide health care. The California experience is expected to serve as a catalyst for the transition to the new standard and greatly hasten its widespread adoption.

The new standards are intended to eliminate the possibility of injections between Luer and NRFit systems. The common current practice of using Luer connection syringes to inject through neuraxial and major regional catheters will no longer be possible. Adaptors will not be manufactured, and syringes will need to have an application-specific connector. Along these lines, it should be noted that features that would help readily distinguish NRFit from Luer syringes, such as coloration and packaging, will be at the discretion of the manufacturer. However, since the color yellow has not uncommonly been used to indicate a neuraxial route, it appears that some manufacturers may incorporate yellow into NRFit compatible equipment.

The development of new standards naturally raises a number of questions from practitioners. An excellent place to learn more about the introduction of these new medical connections is the Stay Connected Web site. Stay Connected is a communications initiative created by the Global Enteral Device Supplier Association (GEDSA) to facilitate the introduction of new standard connectors (as an aside, it is interesting to note that “NRFit” is a trademark of GEDSA). Facts regarding neuraxial-specific connectors can be accessed at: www.stayconnected.org/frequently-asked-questions/ frequently-asked-questions-neuraxial/.

The development of better small-bore connections in medical care has been an ongoing patient safety initiative for over 2 decades. Now that new standards for neuraxial and major regional anesthesia have been developed and the redesigned products are reaching the market, it is anticipated that they will be rapidly adopted into clinical use. Practitioners are advised to familiarize themselves with this new development in regional anesthesia.