Approximately one-third of all neonates in the United States are delivered by Cesarean section. The most common indications include elective repeated Cesarean delivery, failure to progress, malpresentation, or alarming fetal heart rate tracings.[1] The most recent American College of Obstetricians and Gynecologists (ACOG) committee opinion on optimizing postpartum care published in 2016 cited pain as a considerable challenge for postpartum women, yet no current standard exists for optimizing post-Cesarean pain management.[2]

Although ACOG recommends a postpartum clinic visit, 60% of patients are estimated to be lost to follow-up; yet, approximately 40% of mothers are reported to have persistent pain at 3 months.[2] [3] Furthermore, estimates suggest that 10–20% of parturients have persistent post-Cesarean pain up to a year following delivery that can be severe enough to interfere with their quality of life on a near-daily basis.[2-4] With such high rates of acute transitioning to chronic pain in conjunction with poor postdelivery follow-up, a tremendous gap remains between patient suffering and health care outreach and delivery.

“We must continue to strive for opioid-minimizing techniques in post-Cesarean section patients.”

ACOG recognizes that the postpartum period is stressful and many women suffer from fatigue, depression, and urinary incontinence in addition to battling preexisting health issues or difficult home social situations in the midst of caring for a new infant.[2] These stressors, compounded with a desire to limit systemic medications for breastfeeding, are possible reasons why women may leave their postpartum pain untreated. What remains for discussion is how we as regional anesthesiologists can intervene to address and treat the problem of acute post-Cesarean pain to optimize patients' quality of life during an incredibly challenging time and possibly prevent the transition to chronic pain extending beyond 3 months. Although techniques such as morphine via epidural and intrathecal (IT) routes have traditionally been used, the undesired side-effect profile has created an opportunity for truncal blocks to gain momentum.

Although IT and epidural morphine remain the most popular form of acute pain control for Cesarean pain, more than 70% of patients require additional analgesia.[1] [5] Furthermore, the side-effect profile should not be underestimated; as many as 87% of patients experience pruritus and up to 70% experience urinary retention. Nausea and vomiting have also been well-established side effects, leading to significant discomfort for a new mother trying to provide acute infant care.[6] Although nonsteroidal anti-inflammatory drugs and acetaminophen are helpful opioid-sparing multimodal adjuncts, the role of regional anesthesia in improving Cesarean pain requires additional exploration.

The transversus abdominis plane (TAP) block targets the anterior rami of spinal nerves, which include the intercostal, subcostal, iliohypogastric, and ilioinguinal nerves that travel between the internal oblique (IO) and the transversus abdominis (TA) muscles (Figure 1). It provides a sensory and motor block from approximately T10–L1 (Figure 2).[7] [8] Several approaches have been described, including the lateral and posterior approach, which entails deposition of local anesthetic between the IO and TA muscles at the midaxillary line or triangle of petit, respectively.[7] 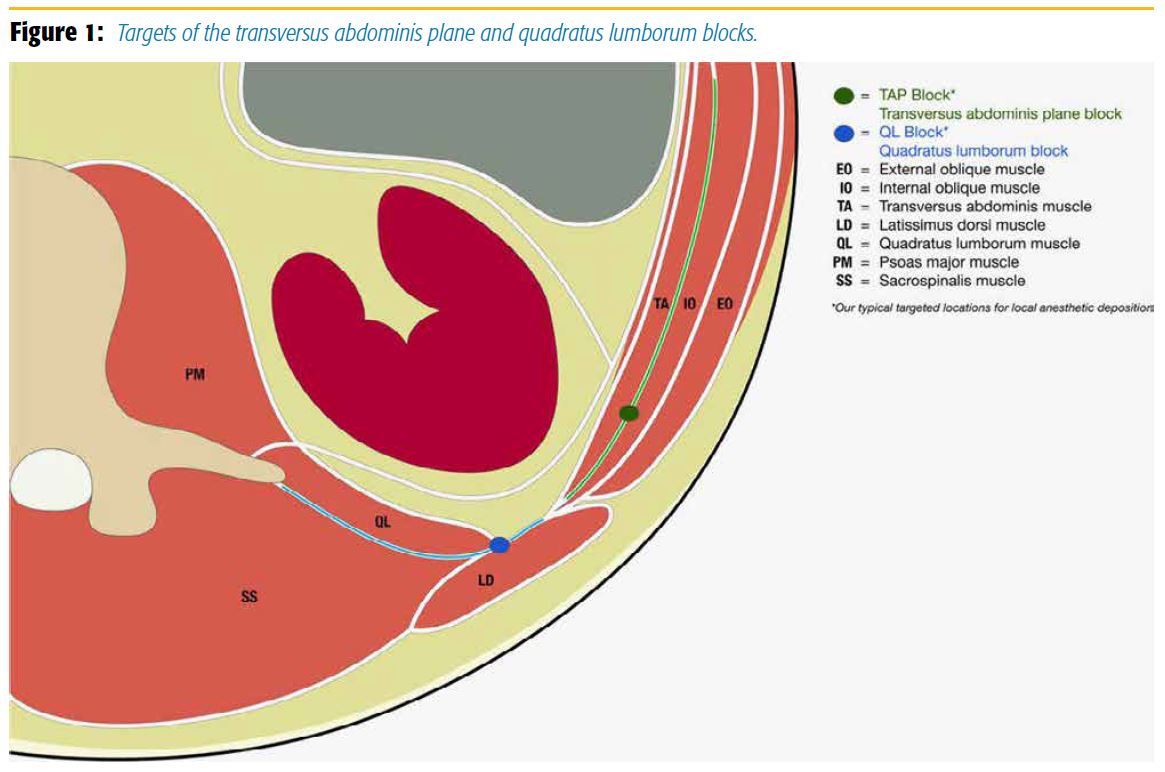 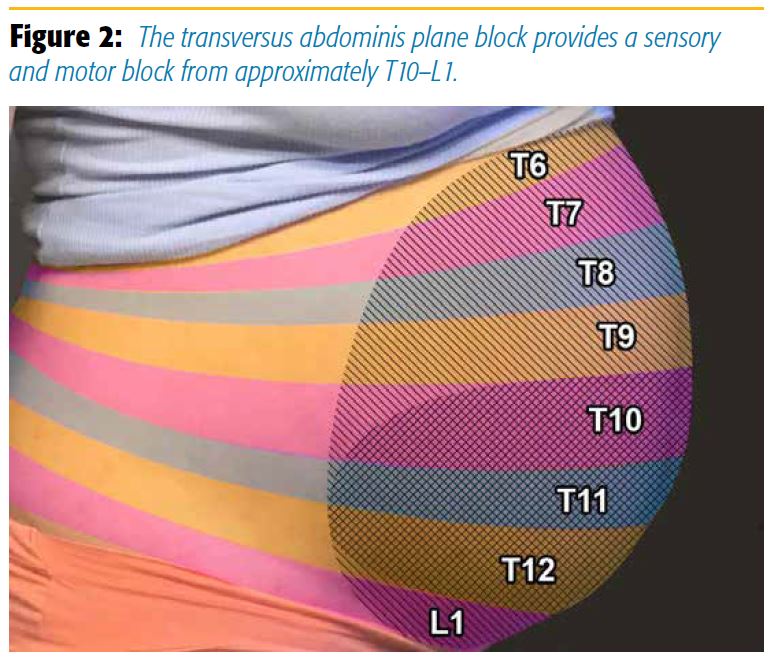 Randomized controlled trials and meta-analysis literature have reported controversial outcomes with the traditional lateral TAP technique, demonstrating no difference in total morphine consumption at 48 hours when compared with wound infiltration of local anesthetic for post-Cesarean pain.[7] [9] When compared to IT morphine, patients receiving a TAP block experienced higher pain scores on movement, higher total 24-hour morphine consumption, and less time to first rescue analgesic, although opioid-related side effects such as nausea, vomiting, pruritus, and sedation were all higher in the IT morphine group.[10] The results have been corroborated by multiple other studies.[11–13]

The definition of the quadratus lumborum block (QLB) requires a nomenclature discussion. It was first described by Blanco[14] and originally published as the “posterior TAP block” technique. With the evolution of nomenclature, the current description of the QLB1 should be considered deep to the TA aponeurosis while the posterior TAP block is superficial.[15] Additional ultrasound-guided approaches, including the QL2 and QL3 block, have been described in the November 2015 issue of ASRA News.[16] The QL2 block, or injection between the posterior border of the QL muscle and the erector spinae, dissects the plane toward the midline and blocks the ilioinguinal, iliohypogastric, and subcostal nerve fibers. In addition, blocking the sympathetic nerve fibers that cover the thoracolumbar fascia sublayer has theoretical benefit. Future investigation is required for further conclusions regarding the optimal approach.

The QLB is a novel and promising technique and is currently used at both authoring institutions. However, opportunities for future investigation exist because few randomized controlled trials have examined the QLB in this patient population. What has been shown is that patients who received a QLB, compared to placebo, and undergoing elective Cesarean section were able to reduce their total morphine consumption by more than 40% within the first 12 hours, and overall fewer patient-controlled analgesic demands were required throughout the 48 hours postdelivery.[6] When comparing the QLB to the TAP block in a similar patient population, the QLB outperformed the TAP block by significantly reducing morphine consumption at 12 (37.5%), 24 (55%), and 48 (48%) hours postdelivery.[17]

Results of the QLB for post-Cesarean pain are promising and preliminarily appear to show that QLB outperforms the TAP block while avoiding any known additional risk. While the QLB gains momentum, what is yet to be determined is the ideal approach, the feasibility of service, and the effect on more long-term pain outcomes and quality-of-life markers for obstetric patients. Furthermore, combinations of IT or epidural morphine and QLBs remain a future area of study. Regional anesthesia experts have much to contribute to obstetric anesthesia, and we must continue to strive for opioid-minimizing techniques in post-Cesarean section patients. We owe it to this group of generally healthy, youthful, and opioid-naive patients to optimize their postdelivery experience as they transition into a new role in life.