Occipital neuralgia is a well-known cause of headaches affecting patients in the ambulatory setting. The International Headache Society defines occipital neuralgia as a unilateral or bilateral paroxysmal shooting or stabbing pain in the posterior part of the scalp in the distribution of the greater, lesser, or third occipital nerve, sometimes accompanied by diminished sensation or dysesthesia in the affected area.[1] The pain is frequently associated with tenderness over the responsible nerve and is often relieved by local anesthetic injection.[1] Patients typically present with pain originating in the suboccipital region and radiating into the upper neck, posterior head, and behind the eyes. The most common causes of occipital neuralgia are compression of the greater occipital nerve (GON) (90% of cases) and lesser occipital nerve (LON) (10% of cases).[2]

Injection of local anesthetic around the GON is not only beneficial in providing therapeutic relief but an important diagnostic procedure that can later be used for more targeted therapy.

According to the International Headache Society, physicians must distinguish occipital neuralgia from referred occipital pain originating from the atlantoaxial or upper zygapophyseal joints.[1] For this reason, injection of local anesthetic around the GON is not only beneficial in providing therapeutic relief but an important diagnostic procedure that can later be used for more targeted therapy.[2]

Classically, occipital nerve blocks have been performed using a landmark-based technique. Place the patient in the sitting or prone position with the head flexed forward and palpate the occipital protuberance and the mastoid process on the nuchal ridge. The GON in most patients is located one third the distance from the occipital protuberance to the mastoid process. The nerve can be found by palpation of the occipital artery and is typically located just medial to the artery.[3] However, anatomic variations in some patients result in the GON occasionally being located lateral to the occipital artery. For this reason, larger amounts of local anesthetic (3–5 cc) are generally used to increase the chance of blocking the GON. Because of the relatively close proximity of the LON, third occipital nerve, and greater auricular nerve to the GON, nonspecific blocks are commonly performed using landmark-based techniques.[4]

More recently, ultrasound-guided GON blocks are being performed at the level of C2. The GON is the posterior division of the C2 ramus emerging from the spinal cord below the posterior arch of C1. The nerve then travels cephalad coursing between the obliquus capitis inferior and the semispinalis capitis, as shown in Figure 1.[5] Blocking the nerve here is a relatively new technique that offers several benefits over classic, landmark-based techniques. At this level, the nerve is not located directly next to an artery and lies deeper between tissue layers, allowing for better sonographic visualization and safety by avoiding the occipital artery. Furthermore, performing the block more proximally enables the ultrasound probe and needle to be below the hairline, promoting improved skin disinfection and more accurate anatomy identification. Finally, it may allow for better pain control in patients whose occipital neuralgia is secondary to proximal GON entrapment.[4] 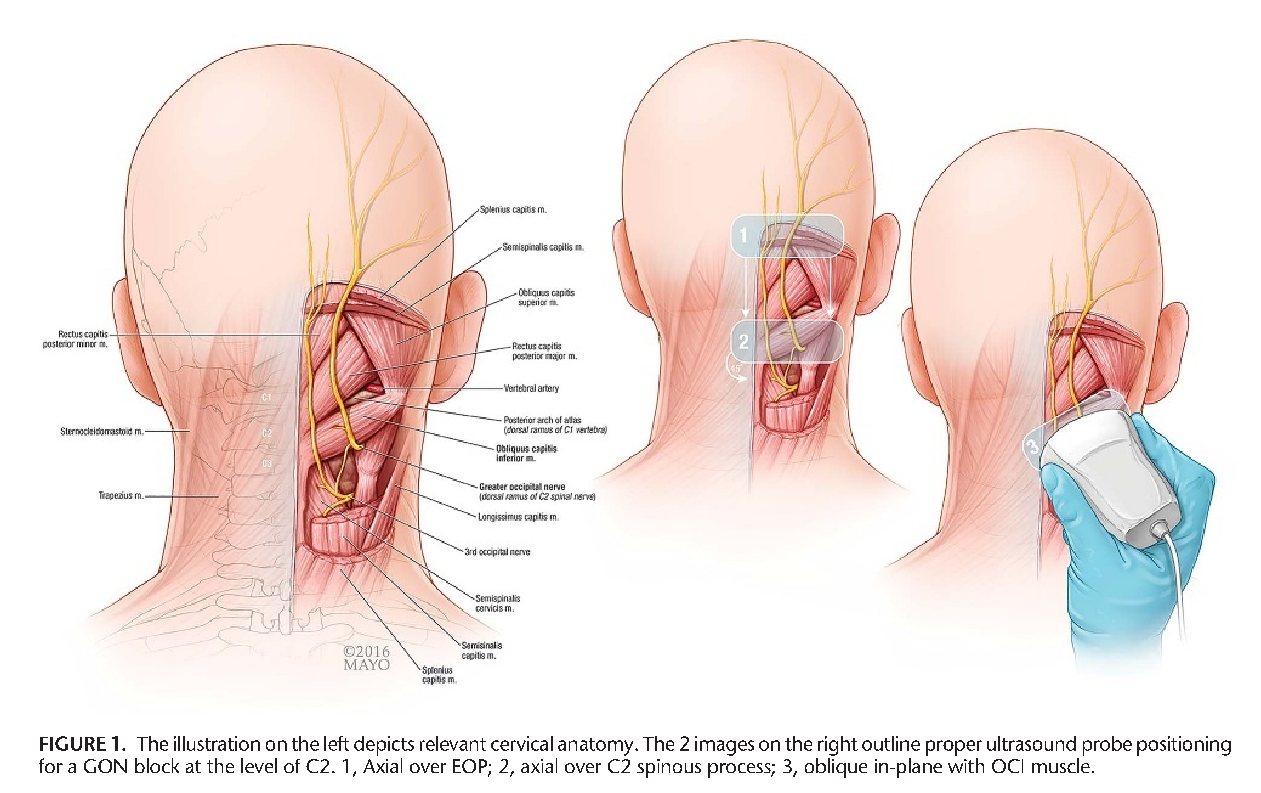 Greher et al were one of the first research groups to describe this technique, showing a higher success rate of local anesthetic spread around the GON in cadaver models than classic, landmark-based techniques. Their study showed a block success rate of 80% with the classical approach compared to 100% with the novel approach at C2.[4] A subsequent prospective, open-label study performed by Pingree et al using the same technique in 14 patients showed that 86% of the patients achieved anesthesia in the GON distribution 30 minutes following injection, with a mean reduction in pain score of 3.78. It also found a significant reduction in pain scores observed up to four weeks later with no significant adverse events reported during the study period.[5]

When performing ultrasound-guided occipital nerve blocks, patient positioning is similar to the classic, landmark-based technique where the patient can either be in the prone or sitting position with a flexed neck. Pingree et al described using a standard high-frequency linear transducer. Start by scanning over the occipital protuberance and then move caudally until the bifid C2 spinous process is easily identified. Move the probe laterally until the obliquus capitis inferior muscle is identified. This muscle originates from the C2 spinous process and inserts onto the C1 transverse process (see Figure 2).[5] The probe may need to be rotated in a slight clockwise motion to ensure that it is parallel with the obliquus capitis inferior muscle belly. Proper ultrasound probe positioning will show the semispinalis capitis and trapezius muscle superficial to the GON with the obliquus capitis inferior muscle deep to the GON, as depicted in Figure 2.[5] 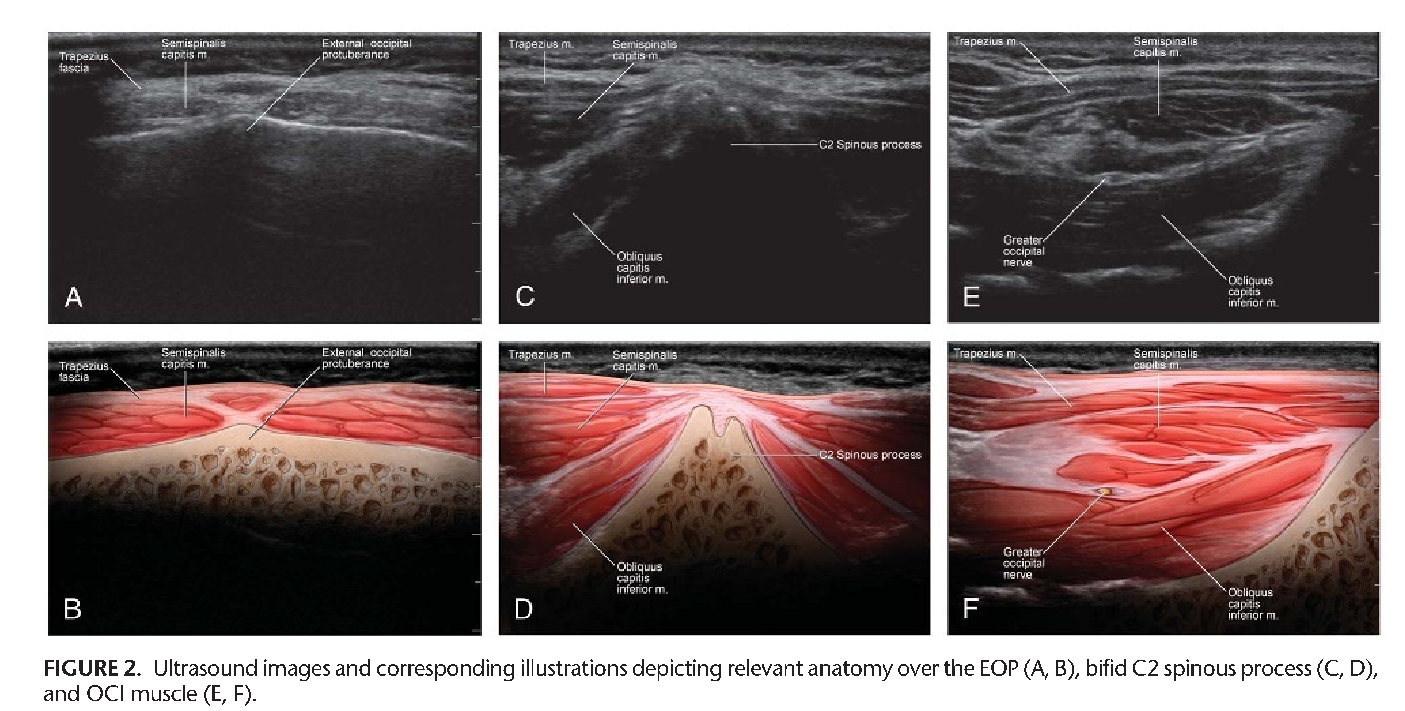 Prior to inserting the needle, use Doppler to identify the relevant vasculature, because the vertebral artery is frequently located deep to the obliquus capitis inferior muscle and laterally to the GON.[4] After proper visualization of relevant anatomy, Pingree et al described inserting a 25-gauge, 2-inch spinal needle in plane with the transducer from medial to lateral, as depicted in Figure 3.[5] Different combinations of local anesthetic and steroids may be injected. Pingree et al used a total of 4 cc (1 cc of 2% lidocaine, 2.5 cc of 0.25% bupivacaine, and 3 mg of betamethasone) with good results.[5] Visualizing the needle tip during insertion is of the utmost importance because the block is performed in relative close proximity to both the vertebral artery and the spinal cord. Local anesthetic spread around the GON during injection is also important to performing the block safely and effectively. 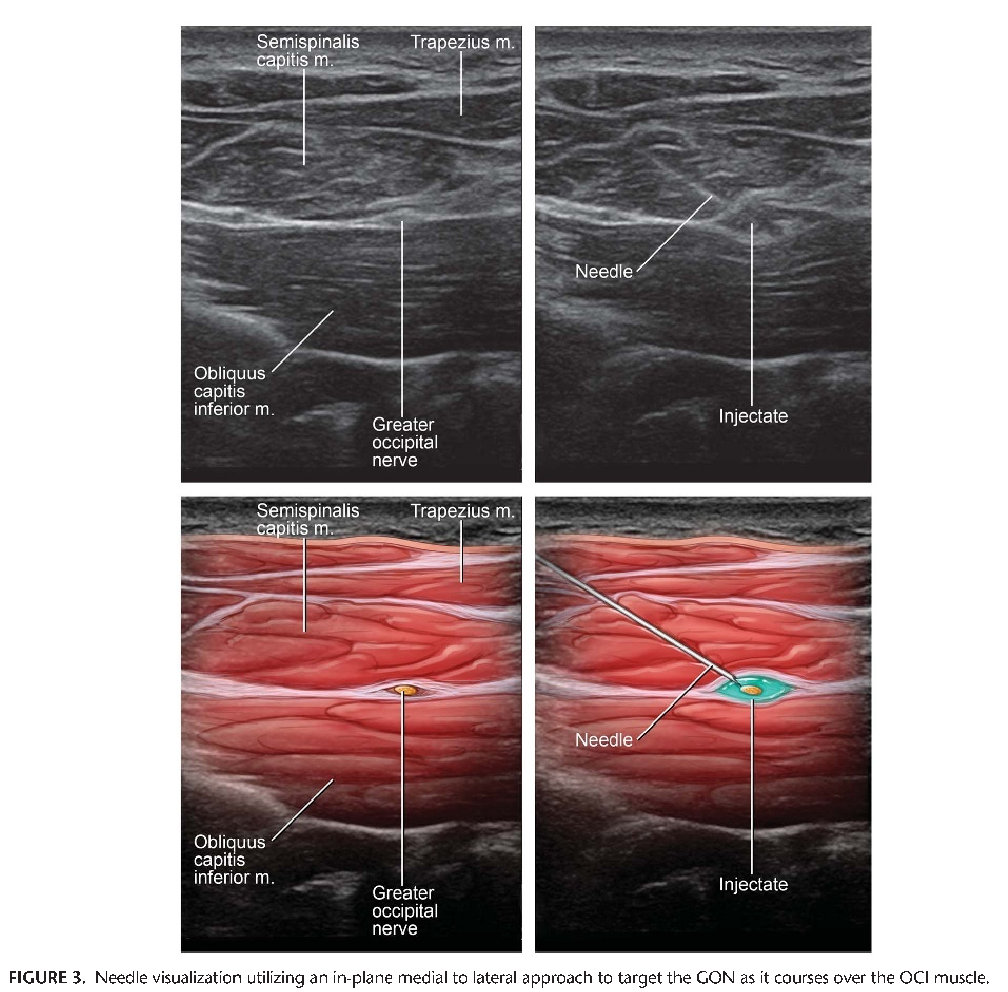 Ultrasound-guided occipital nerve blocks appear to be a relatively safe, effective, and easy procedure for both the diagnosis and treatment of occipital neuralgia. Compared to a blind landmark-based technique, ultrasound-guided nerve blocks allow for direct visualization of the greater occipital nerve, enabling providers to perform more targeted blocks and potentially allowing for denervation procedures in the future. Given the increase in availability of ultrasound equipment in the ambulatory setting and proficiency of providers, clinicians should consider performing this block for patients presenting with symptoms concerning for occipital neuralgia.