How I Do It: Ultrasound-Guided Sacral Lateral Branch Blocks

Sacroiliac joint- (SIJ-) related pain has traditionally been diagnosed and treated with intra-articular injections;[1] however, the increased interest in radiofrequency ablation techniques targeting the posterior joint innervation (sacral lateral branches) has underlined the need for diagnostic blocks specifically targeting those nerves. Although fluoroscopy guidance has been validated for this purpose, it is seldom used because of the 17 injections (and nine skin entry sites) required.[2] A simplified, ultrasound-guided technique, however, requires only three injections.[3]

Although the anterior aspect of the joint is innervated by the ventral rami of L4 and L5, a posterior sacral neural network (PSN) innervates the dorsal aspect of the joint and posterior ligaments (posterior sacral complex).[4] The results of a cadaveric study demonstrated that the PSN received contributions from the S1 and S2 lateral branches in 100% of specimens, from S3 in 88% of cases, and rarely from the L5 and S4 levels in 8% and 4%, respectively.[5] When a contribution from the L5 dorsal ramus was present, it merged with the PSN and did not innervate the joint directly.

Most of the nerves contributing to the PSN cross the lateral sacral crest (LSC) between the second and third transverse sacral tubercles; however, a superior lateral branch can also innervate the SIJ at the S1 level in up to 40% of subjects. Although the LSC is difficult to identify using fluoroscopic imaging, it is a reliable sonographic landmark and constitutes the injection target when performing an ultrasound-guided sacral lateral branch block (SLBB). 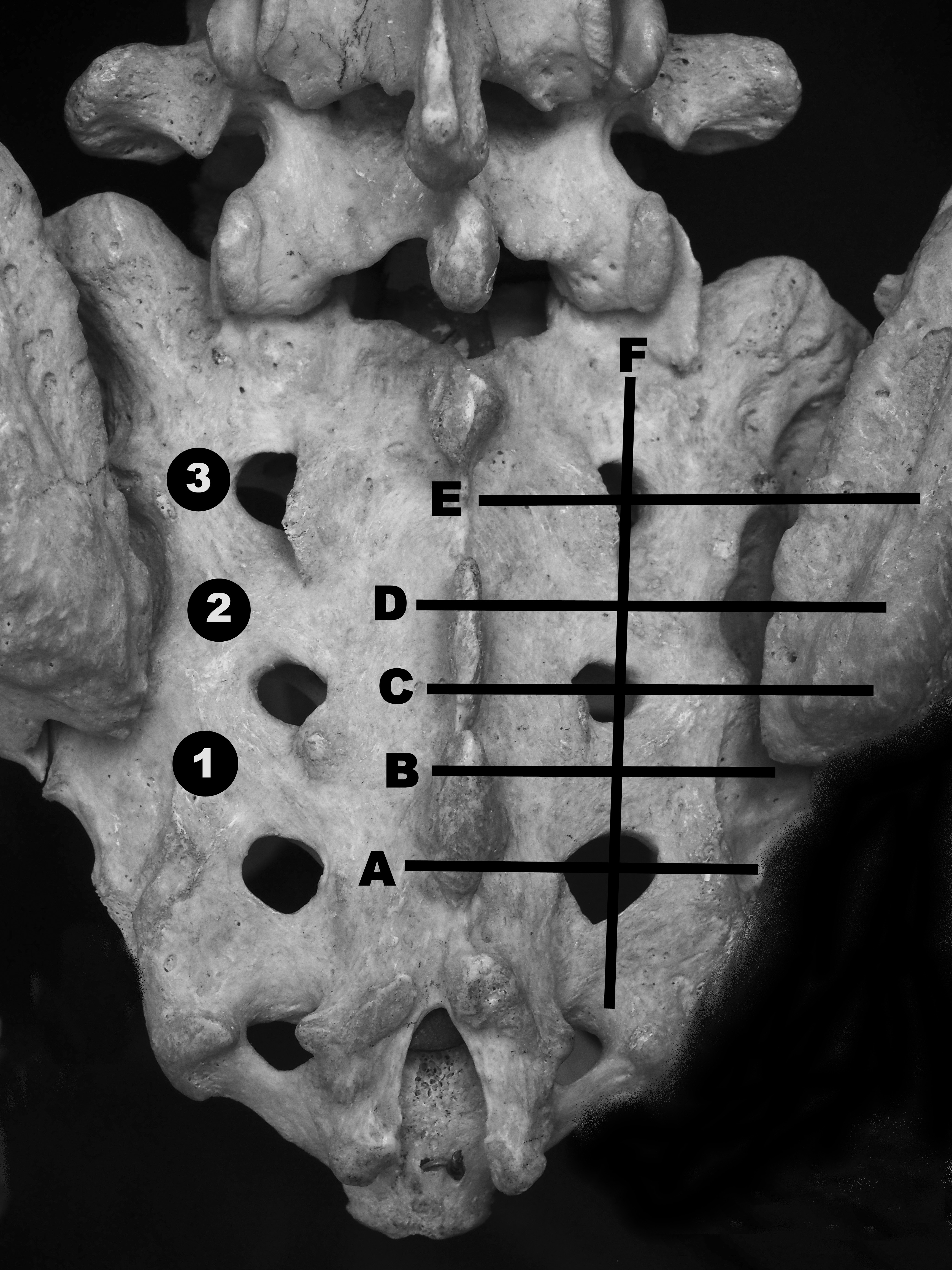 Transverse (short axis) scan and technique. This view is used for needle placement and injection. Place a C5-2 MHz curved transducer on the lower sacrum and perform a systematic scan, first identifying the sacral hiatus in the midline, then moving over to the target side keeping the median sacral crest in view. Then move the probe cephalad to visualize the posterior sacral foramina (S4, S3, S2, and S1) and LSC (Figure 1 and 2).

Sagittal (long axis) scan. This view is used to confirm level and needle position before injection. The posterior foramina appear as gaps in the bony contour of the sacrum (Figure 2F).

Key landmarks are identified by scanning the sacrum in the transverse plane, cephalad from the sacral hiatus (Figure 1 and 2). Perform three injections of local anesthetic on the sacral lateral crest by advancing the needle in-plane from a medial to lateral direction: 1.5 mL between S2 and S3, 0.5 mL between S2 and S3, and 0.5 mL lateral to S1. After each needle placement, perform a sagittal scan to confirm needle position in the cephalo-caudal dimension (Figure 2F). 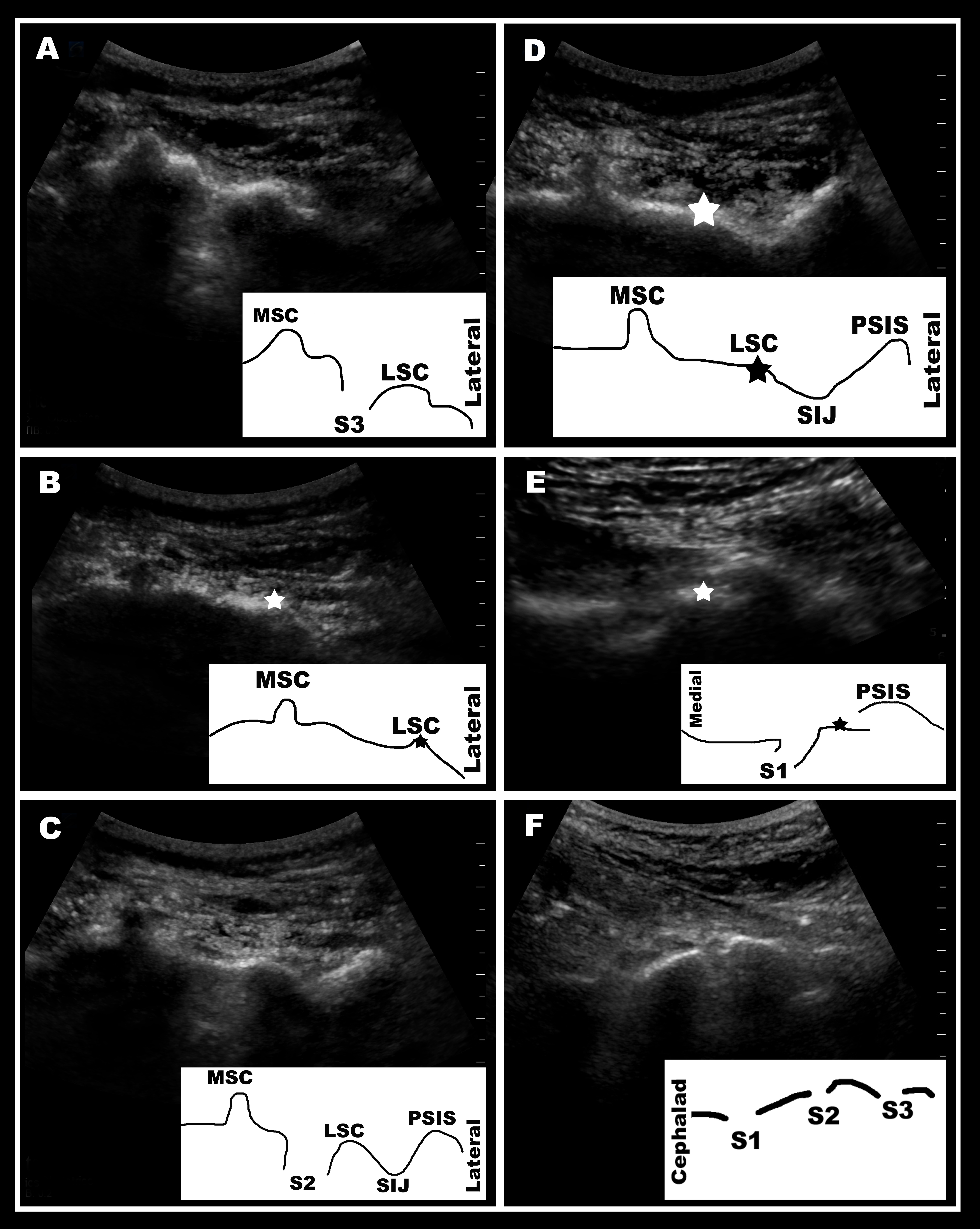 To date, one randomized controlled trial involving 40 patients with chronic low back pain compared fluoroscopy- and ultrasound-guided SLBB techniques.[3] In the fluoroscopy group, SLBB were performed according to a previously described 17-injection technique, which involves 9 skin entry sites and the targeting of the L5 posterior root and S1–S3 sacral lateral branches. The ultrasound-guided technique consisted of the three injections described previously, and analgesic testing was done by probing the dorsal sacroiliac ligament, sacroiliac joint, and interosseous ligament with a 22-gauge block needle. Ultrasound guidance was associated with shorter performance times, fewer needle passes, and a lower incidence of vascular breach. However, the block effect (the proportional decrease in numerical rating scale between pre-block and post-block analgesic testing) was similar in both groups. Furthermore, no statistical differences were found in the proportions of patients achieving complete analgesia at each test site.