A sound knowledge of regional anesthesia billing and coding is essential for physicians performing nerve blocks to prevent unintentional consequences, especially overbilling. Yet, billing and coding are often misunderstood and underemphasized. This may reflect the complexity of the material; acute pain consultation and follow-up are governed by different rules than procedural billing, which is itself comprised of several different components. Adding to the complexity, the Centers for Medicare and Medicaid Services (CMS) sets billing rules that other payers often use but can have variations based on state regulations or individual payers.[1] This article will focus narrowly on regional anesthesia procedural billing with the goal of assisting the practicing regional anesthesiologists in the perioperative setting. Specifically, this article will explore the nuances of billing nerve blocks that are intended for surgical anesthesia versus those for postoperative analgesia.

“Having two methods for coding the same procedure based on the intent and subsequent use of that procedure is a central challenge in properly coding and billing acute pain procedures.”

As a general overview, physician services are coded using the Current Procedural Terminology (CPT) code system with or without modifiers (Table 1 and 2). CPT codes are assigned relative value units (RVUs), which account for three components: physician work, practice expense, and malpractice expense. Each component of the total RVU is adjusted by a geographic practice cost index, and the total is multiplied by a conversion factor (CF), yielding the monetary value of services provided. CFs vary based on patient insurer (the payer) as well as the region: the 2019 Medicare CF is $36.0391, Medicaid is lower, and private insurance is often substantially higher.[2] Of note, some payers have alternative methods of reimbursement, such as negotiating a percentage of billed charges in lieu of payment based on RVUs. 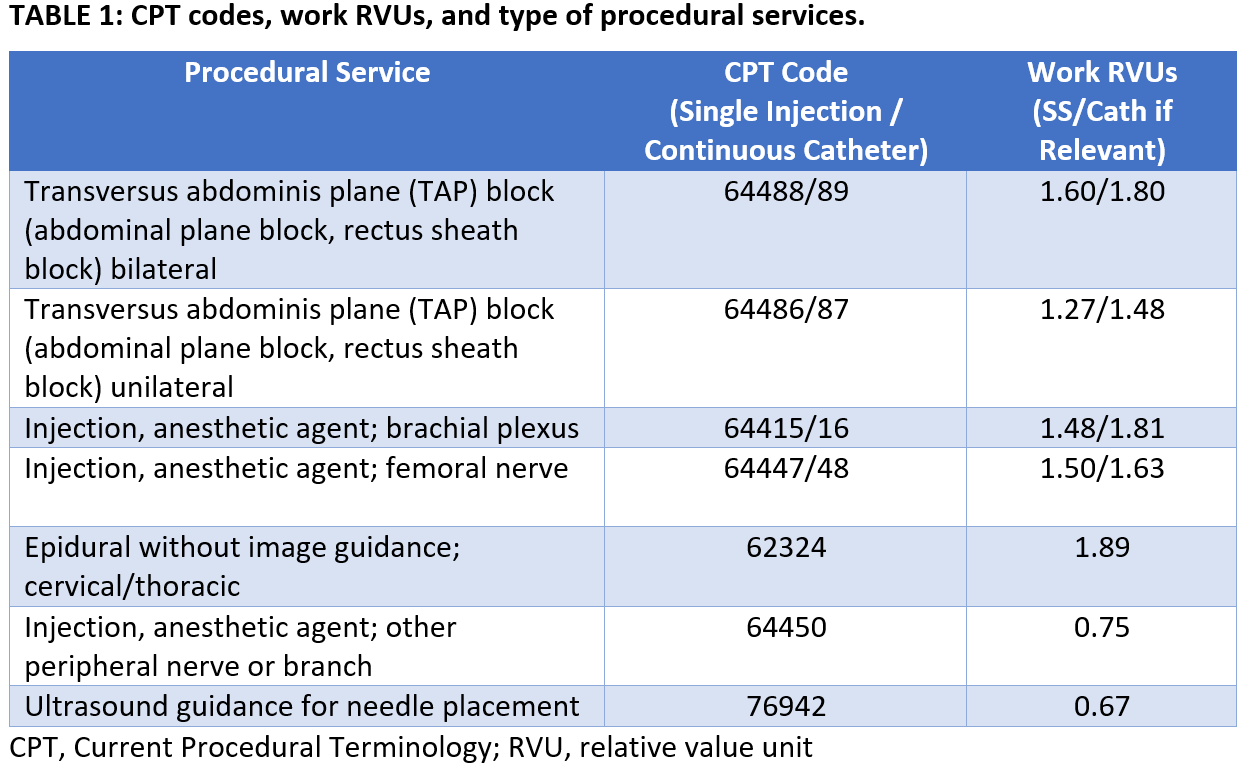 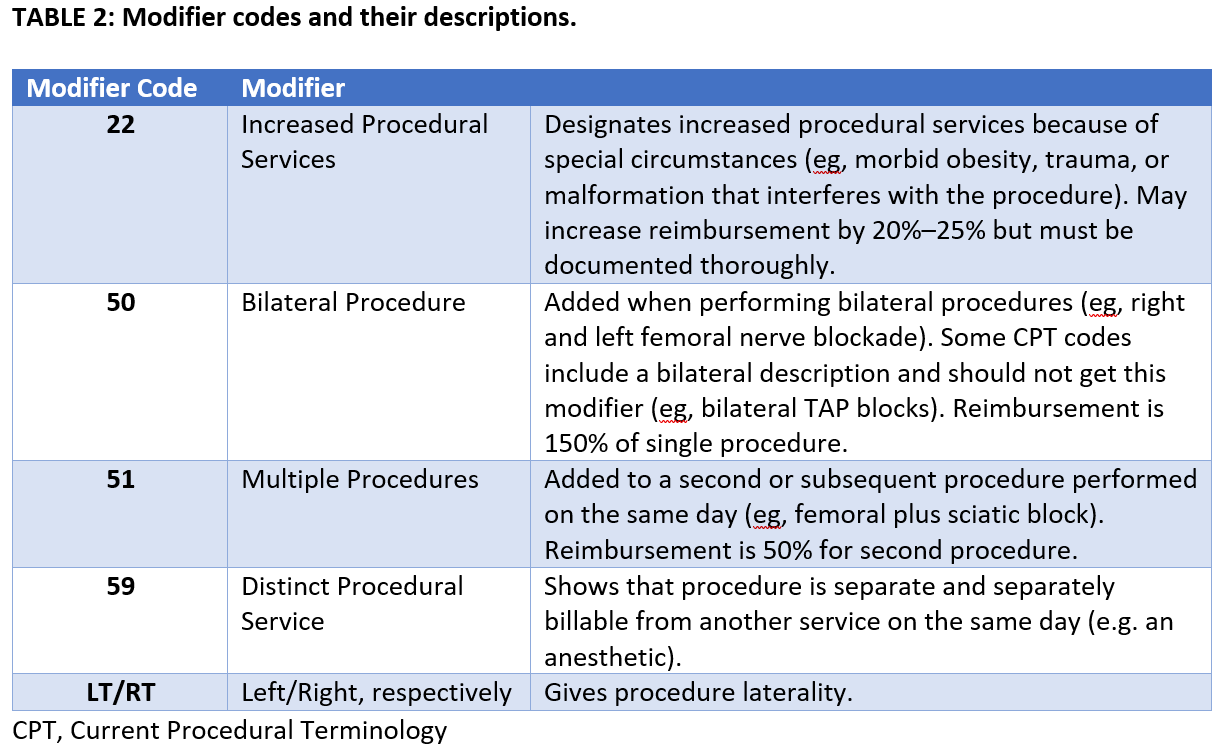 Although CPT codes are typically associated with a defined amount of RVUs, codes for provision of anesthesia services are handled differently. The CPT code for the surgical procedure performed is cross-walked to an associated anesthesia (ASA) code, which has two components: base units, determined by the complexity of the surgical procedure the patient is undergoing, and time units, determined by the time between anesthesia start and stop times (Table 3). When a nerve block is intended as a surgical anesthetic, the time taken to perform the block is captured as time units under the applicable ASA code at a rate of one time unit per 15 minutes—and it may be subdivided. In contrast, a procedure performed for postoperative (or nonoperative) analgesia is billed under a CPT code separate from the anesthetic’s base and time units (Table 1). A block for postoperative pain thus generates a fixed number of RVUs with no time component.[3]

Having two methods for coding the same procedure based on the intent and subsequent use of that procedure is a central challenge in properly coding and billing acute pain procedures, especially when the two methods may produce modest differences in fees. As an example, an infraclavicular block performed as a surgical anesthetic and performed in five minutes would be worth 0.33 time units (depending on a payer’s rounding rules), whereas the same block performed as postoperative analgesia would be worth 1.48 RVUs. Depending on the payer and the agreed reimbursement for time units and RVUs, a block for postoperative analgesia might generate higher revenue. If coded incorrectly, physicians risk incurring penalties for fraud and abuse.[4]

Purpose of the Block 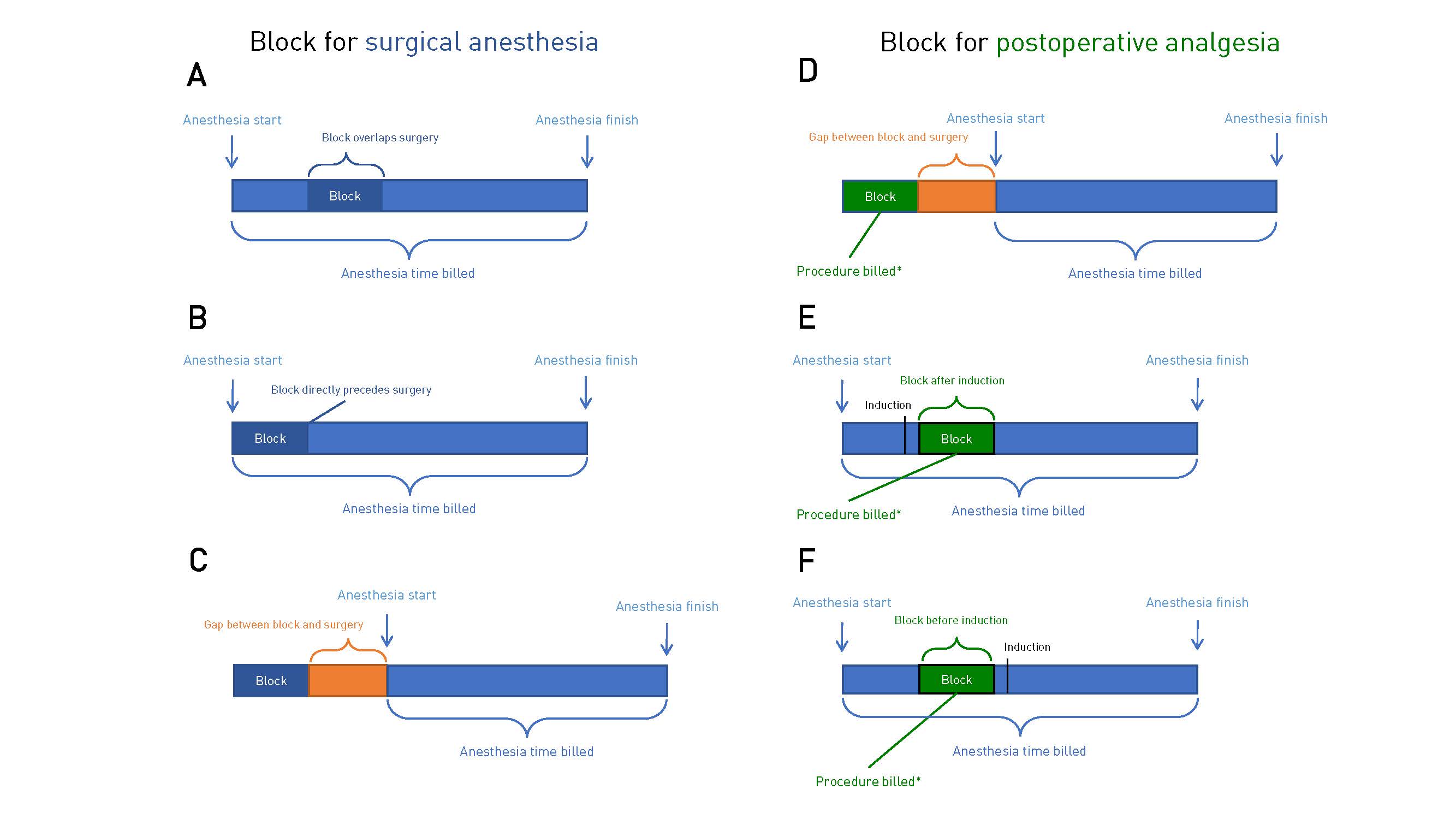 Another example of improper practice would be an infraclavicular block performed for a carpectomy where the patient is maintained intraoperatively on a propofol infusion with nasal cannula O2 and the anesthetic is charted as monitored anesthesia care with block for postoperative pain. Instead, it should be a regional anesthetic and the block billed as part of the ASA code for the procedure (base + time units). However, in the same circumstances, if the block were performed and a laryngeal mask airway placed, the anesthetic would be charted as general and the block could be billed as a separate CPT code for postoperative pain. See Table 4 for other examples of cases and their proper billing codes. 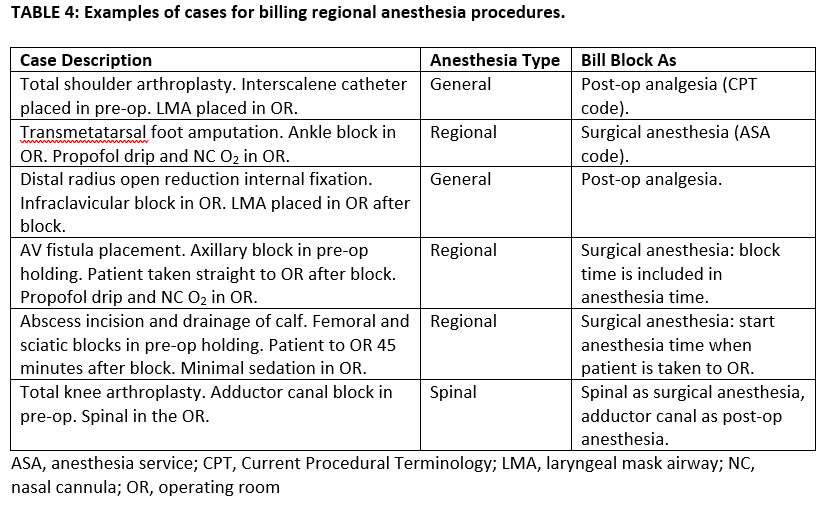 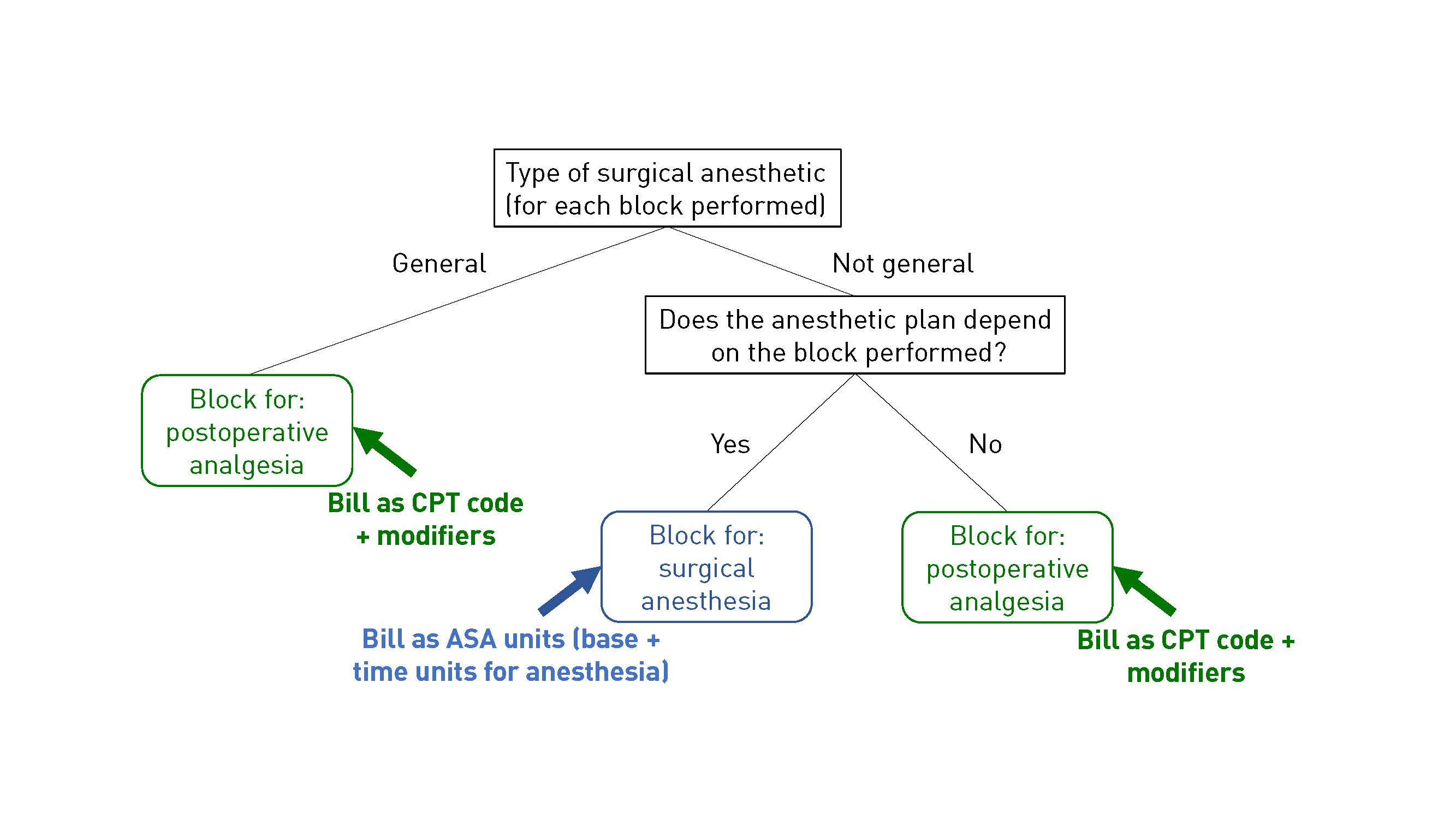 CPT Codes and Modifiers for Postoperative Analgesia Modifiers (Table 2) are appended to CPT codes for postoperative analgesic blocks to telegraph important information to insurers and payers. The -59 modifier shows that a block procedure should be billed separately from the surgical anesthetic. Without a modifier, separate billing of block and anesthetic may be rejected. Table 1 provides examples of CPT codes and 2019 RVUs for several anesthetics and several blocks. This is not an exhaustive list, and CMS may adjust the values each year with input of an American Medical Association committee.

Many types of blocks lack their own specific CPT code. Interscalene and supraclavicular blocks are both coded as brachial plexus injections (64415), whereas adductor canal blocks are cross-walked to the femoral nerve injection code (64447). For blocks not included within or substantially similar to blocks where a CPT code exists, the “other peripheral nerve injection” code can be used (64450). Ultrasound guidance has its own CPT code, which can be billed once in addition to the block performed (if two blocks are performed, the ultrasound code may be billed only once), provided appropriate documentation is present. This includes documentation of ultrasound use, image copy (proof of use) retained in the chart or picture archiving and communication system, and a statement about image interpretation such as “ultrasound interpreted and normal except as noted.”

Additional required billing documentation elements include date of service, diagnosis, indication for procedure, block type, and proceduralist signature. Language used for diagnosis should map easily to diagnosis codes (ICD-10), not the surgical diagnosis—communication with your group’s coders is valuable to make sure your documentation is clear and thorough enough to meet local compliance standards. Typically, a postoperative analgesic block will have a diagnosis code G89.18 (acute postprocedural pain) with a secondary diagnosis code for the region of the pain.

Documentation of a surgeon’s (or other clinician’s) request for a block is also needed when billing for a postoperative analgesic block but not a surgical anesthetic block. Ideally, the request would be done formally by the surgeon as a note or order. A less desirable option is to record the surgeon’s request in the documentation of the block itself. When supervising trainees, attestation of presence during ultrasound-guided and key portions of the procedure is necessary to bill.

Physicians who perform nerve blocks should be aware of billing nuances and recognize the pitfalls of documentation and coding for regional anesthesia. This review has attempted to summarize the material in such a way that physicians and practices can navigate those tricky issues. The authors also hope that awareness of current billing standards and the sometimes-perverse incentives they create inspires physicians to advocate for changes in the health care system to help align patient care and reimbursement incentives.

This information is presented to the best of our knowledge, reflecting the rules in effect as this article was prepared. Prior to any implementation of practice or billing changes, please seek consultation with your local billing, coding, and compliance staff.