Regional anesthesia for veterinary patients was first described in the early 1900s. Over time, the importance of providing analgesia has become more apparent. The American College of Veterinary Anesthesia (ACVA) was founded in 1975 and provided a means for board-certifying veterinarians who performed a residency in anesthesia. More recently, the ACVA updated its title to the American College of Veterinary Anesthesia and Analgesia, highlighting the increased awareness of the importance of analgesia among veterinary specialists.

Veterinary medicine can very broadly be divided into three main fields based on the patients’ species. Small-animal medicine includes dogs and cats. Large-animal medicine includes horses, cattle, swine, sheep, goats, llamas, and alpacas. Exotic animal medicine encompasses all zoo animals, wildlife, and nondomestic pets. It is impossible to cover the topic of regional anesthesia in veterinary species in one brief article. This topic is far more appropriate for a textbook. However, the following will provide an overview of this ever-expanding field of veterinary analgesia.

In veterinary medicine, regional anesthesia is used for many reasons, including improved postoperative pain control, decreased systemic opioid use, and improved quality of recovery.1 Companion animals are considered family to a number of owners, and the lengths to which they will go to cure disease, prolong life, or alleviate suffering can be considerable.

Most regional anesthetic techniques used at this time have been adapted from human medicine. However, veterinarians face limitations and challenges that are oftentimes not encountered in the practice of adult human medicine. First, since nonhuman patients are nonverbal, they cannot communicate their degree of pain or the efficacy of an analgesic technique that has been employed. Veterinary medical professionals must rely on various assessment tools to estimate the degree of pain. Another challenge is that of patient compliance. Animals generally lack self-restraint, and most will require heavy sedation or general anesthesia prior to administration of locoregional anesthesia. Finally, there are wide variations in species’ anatomy, physiology, and the pharmacokinetics of local anesthetics that must be taken into consideration prior to safely performing regional anesthesia. Regional anesthesia in feline patients, for example, can be more challenging than regional anesthesia in canine patients. Cats have increased sensitivity to local anesthetics when compared with other species, necessitating much lower maximum doses be used. Anatomically, the dural sac of cats terminates further caudally than in human or canine counterparts, often resulting in a subarachnoid injection rather than an epidural injection. Intraoral blocks also can be more challenging in cats, as the proximity of feline orbits to their oral and nasal structures makes techniques such as caudal maxillary or infraorbital blocks more challenging. Small breeds of dogs present similar challenges. Globe rupture and retrobulbar hematomas are known complications of intraoral techniques in these species.2-3

Locoregional anesthesia for procedures involving the thorax, mammary chain, or abdomen can provide significant pain relief. The transversus abdominis plane block has been used for lower abdominal procedures. Epidural anesthesia is used for abdominal surgeries or procedures that require manipulation of perianal or external reproductive and urinary organs. Analgesia for thoracotomies may be provided via thoracic epidurals or paravertebral or intercostal nerve blocks (Figure 2).

For thoracic limb surgery distal to the midhumerus, brachial plexus blocks are commonly used. However, for surgeries occurring distal to the elbow, a combination radial, ulnar, median, musculocutaneous block is chosen because this technique lacks many of the more serious complications such as pneumothorax, cervicothoracic ganglion block with Horner’s syndrome and phrenic nerve paralysis.

It is important to note that these patients require marked strength in all four limbs to remain upright and do not tolerate motor blockade, which results in paralysis or paresis. As such, lumbosacral epidurals, common among small-animal anesthetic techniques, are rarely performed with local anesthetics. To date, femoral or sciatic blocks have not been reported among adult horses or cattle. Distal limb procedures can be performed using intravenous regional anesthesia or blockade of peripheral nerves. Fracture repair, arthroscopy, or proximal limb surgical procedures typically require a general anesthetic at a specialty veterinary practice with systemic analgesics.

Anesthesia for laparotomy in cattle is typically achieved by proximal and distal paravertebral blockade of T13, L1, L2, and L3 spinal segments. The abdomen of cattle can also be blocked using infiltration of local anesthetic along the posterior aspect of the last rib and a line extending posteriorly along the transverse processes of the lumbar vertebrae (the inverted L block; Figure 3). Similarly, surgical approaches to the ventral abdomen can be performed with the sedated animal restrained in the supine position with local infiltration of the projected incisional path with local anesthetic (Figure 4). Equine patients more commonly require general anesthesia for laparotomy because of their highstrung temperament, but regional anesthetic techniques combined with heavy sedation can allow surgeons to perform abdominal procedures with the patient standing. Segmental thoracolumbar anesthesia has been reported in addition to infiltration of the surgical site with local anesthetic. 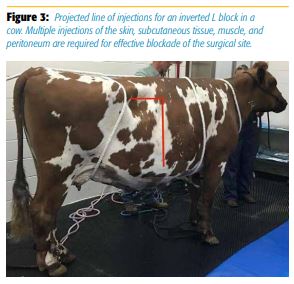 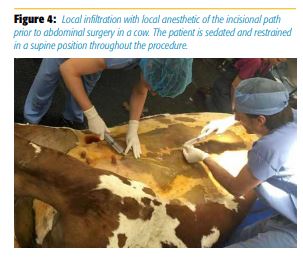 Regional anesthesia is not as widely used among exotic species. Rather, pain control of patients that have evolved to mask pain and weakness is a challenge unto itself. Recognizing signs of pain can be difficult when dealing with the gamut of patients from predators to prey species—all of which may express discomfort very differently. Knowledge of the species, specific patient history, and astute powers of observation are invaluable in the development of an analgesic plan. Also very useful is input from the animal’s primary caregivers, the zookeepers who are attune to subtle changes in behavior, which may be the only clue to discomfort in some species.

The zoo veterinarian may be called on to plan and administer analgesia for a wide range of patients ranging from invertebrates to megavertebrates. Each type of patient poses its own unique challenges. The clinician must not only recognize and interpret signs of discomfort in a wide variety of species but also strategize and implement effective analgesic regimens that accommodate patient and caregiver safety. Many zoo animals are large, dangerous animals that cannot be approached directly without a barrier or immobilization. However, while that approach may be necessary for a large carnivore such as a lion or tiger, the veterinarian also must be ready to treat something as small as a poison dart frog.

Once an animal has been identified as needing analgesia, the challenge continues: Because of the range of species involved, there is little evidence-based analgesic information available for most zoo animals. Pharmacokinetic studies and analgesia efficacy experiments are rare in the field of zoo medicine. To get around this, clinicians will use allometric scaling when feasible, adjusting the dosage of a drug to a species based on variations in metabolic rate. For instance, the dosage of opioid in a mouse may be up to 100 times greater than that of an elephant. More often, veterinarians extrapolate from dosages in related species (including humans, in the case of the great apes), consult with colleagues, or rely on previous experience to determine what course to follow.

A significant concern for the zoo veterinarian is being able to provide analgesia safely. Anesthesia of a fractious or dangerous animal is sometimes the only means to be able to handle some individuals. However, immobilization/general anesthesia may be contraindicated for very ill, pregnant, or nursing animals and chronically ill patients. One very important addition to the arsenal of treatment strategies that has revolutionized the approach to zoo veterinary care is the use of behavioral training to facilitate treatment. Many animals, from fish to elephants, can be trained to receive treatment or undergo diagnostic procedures under behavioral control, sedation, and/or local analgesia to avoid the need for full anesthesia (Figure 5). Adjuncts to pharmacologic management of pain, which can be administered under these conditions, include physical and thermal therapy, acupuncture, and cold laser therapy.

The remaining practical aspects of analgesia in zoo animals relate primarily to the mode of delivery and the frequency at which animals can be dosed or handled. The oral route of medication delivery is preferred for convenience. Compounded formulations of common medications are often necessary to treat the variety of species in a collection. For example, a small primate might take a banana-flavored meloxicam suspension while a river otter might accept only a meat-flavored paste.

For parenteral medications, behavioral training is again useful as animals can often be trained to stand for injections. However, there are times when remote administration via dart is the only option. This might be the case in a large hoofstock species living in a large enclosure that cannot be approached closely or in thick-skinned animals, such as the aardvark, in which even 20-g needles have difficulty penetrating the skin. Since repeated injections can be traumatic or stressful, many zoo veterinarians are looking to longacting formulations of the more commonly used analgesics, such as buprenorphine or meloxicam, to reduce the need for frequent administration.

Topical analgesics are less commonly used, because it is difficult to prevent a zoo animal or its conspecifics from grooming the medication or ingesting an analgesic patch. Local anesthetics are used more frequently now in perioperative situations to supply additional analgesia; however, the use of these techniques is less frequent than in companion animal medicine. For example, an epidural in a grizzly bear is not likely to be feasible in most situations because of management and safety considerations of motor blockade postanesthesia.

Zoo animal analgesia is an area in which we can greatly benefit from continuing collaboration and discussion with colleagues in the veterinary and human medical fields. This is the only way in which we will be able to better incorporate the use of both common and novel analgesics and develop creative and new modes of administration in zoo animals in order to provide the highest level of comfort achievable under often challenging circumstances.