How I Do It: The Anterior Sciatic Nerve Block in the Original Ultrasound-Guided, Long-Axis, In-Plane Approach

An obese patient with extensive comorbidities requiring an above-knee amputation was scheduled for surgery. Because he had experienced cardiac arrest on induction of general anesthesia previously, the surgical team wanted to perform the procedure entirely under a regional anesthetic, and the patient was referred to us. He received femoral, obturator, and anterior sciatic blocks, and the surgery was completed successfully without any need for sedation. The vital parameters remained unchanged throughout the procedure, and the patient was successfully discharged a few days later.

Since ultrasound became the predominant method of nerve localization in the early 2000s, we developed a technique to reliably visualize and block the sciatic nerve from an anterior approach.

The anterior approach to sciatic nerve blockade was first described by Beck in 1963.[1] It was a pure landmark approach that offered the unprecedented benefit of maintaining patients in a supine position. In combination with a femoral nerve block, a patient could receive full blockade of the lower extremity without the need for repositioning. However, even following the introduction of nerve stimulation in the 1970s, the anterior sciatic nerve block remained the providence of enthusiastic specialists.

Later imaging studies showed that using the classical landmarks often would cause contact with either the lesser trochanter or the femur shaft itself.[2],[3] Further complications were inadvertent puncture of the large vessels, particularly the profunda femoris artery. Meier, Chelly, and colleagues modified the original technique by moving the needle insertion point further distal and offered positioning (leg in neutral position) and insertion pearls (digging two fingers into the muscle groove of the sartorius and rectus femoris).[2],[3]

The anterior sciatic block is well suited for continuous blockade because the thick muscle mantle provides good catheter stabilization without interfering with the patient walking on crutches. Another advantage is that the catheter is not in the way of a thigh tourniquet. Furthermore, the patient’s leg does not need to be repositioned while lying supine, unlike the lateral approach to the sciatic nerve block. Although evidence from 40 patients demonstrated that the lateral approach might have a more rapid onset in blocking the posterior femoral cutaneous nerve,[4] the actual clinical significance remains debatable. Another study showed that the anterior approach to sciatic nerve block is performed as easily and successfully as the posterior subgluteal approach under ultrasound guidance.[5]

The main reason the block is not a frontline block of the sciatic nerve is because of the nerve’s depth with an anterior approach. Most commonly, nerve localization by needle occurs anywhere from 7–15 cm, typically around 10 cm deep on an average patient. Users familiar with this nerve block, however, more often than not will use the technique on a regular basis because of its relatively easy landmarking, clear local anesthetic spread pattern under ultrasound guidance, and advantage in anchoring the perineural catheter.

Since ultrasound became the predominant method of nerve localization in the early 2000s, we developed a technique to reliably visualize and block the sciatic nerve from an anterior approach. The popular approach proposed by other groups seems to be scanning the thigh horizontally and creating a short axis view of the sciatic nerve. Depending on the patient, however, nerve identification can be difficult clinically. Depth of the target structure and general anatomy around the nerve often make definite identification challenging in a short axis view. We propose turning the ultrasound transducer to 90 degrees so that the sciatic nerve is imaged in a long axis view. 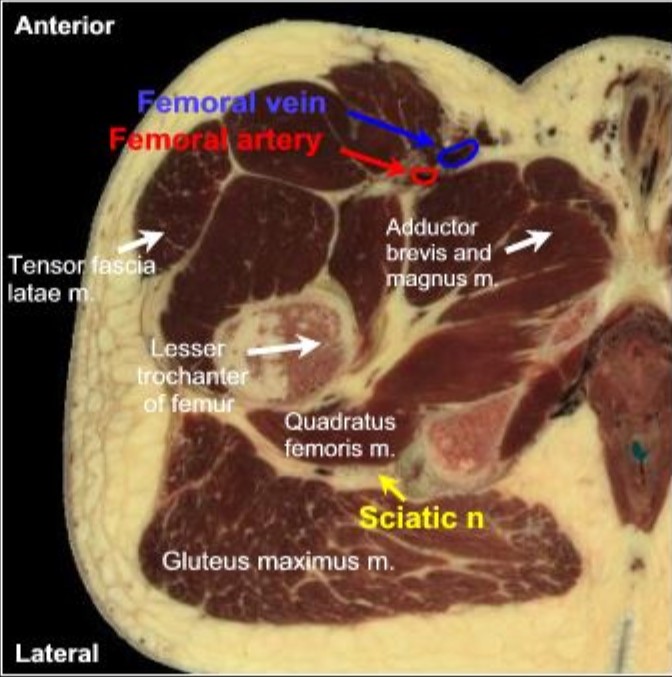 Neural anatomy. After its exit from the greater sciatic notch, the sciatic nerve is covered ventrally by the superior and inferior gemilli and the obturator internus and caudally by the quadratus femoris. The principle muscle dorsally is the gluteus maximus. As the nerve courses further distal, it is covered by the biceps femoris muscle dorsally and the dorsal surface of the adductor magnus muscle ventrally (Figure 1). 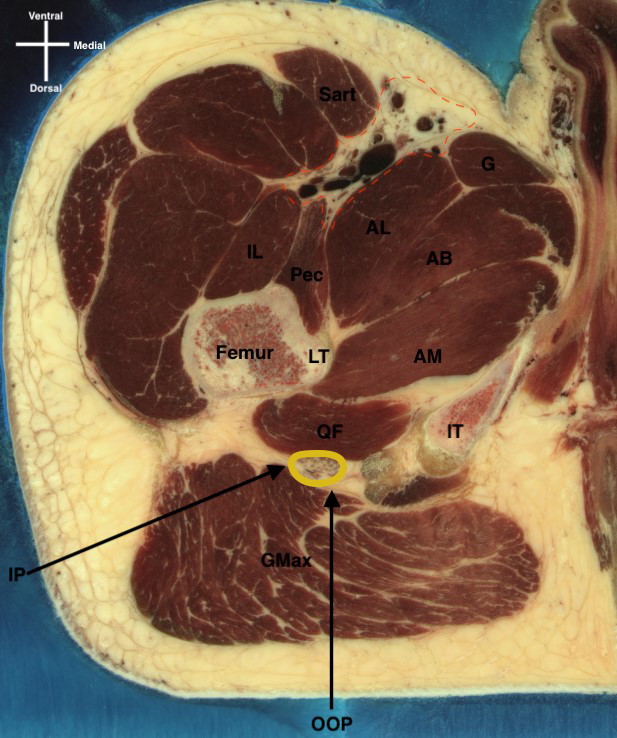 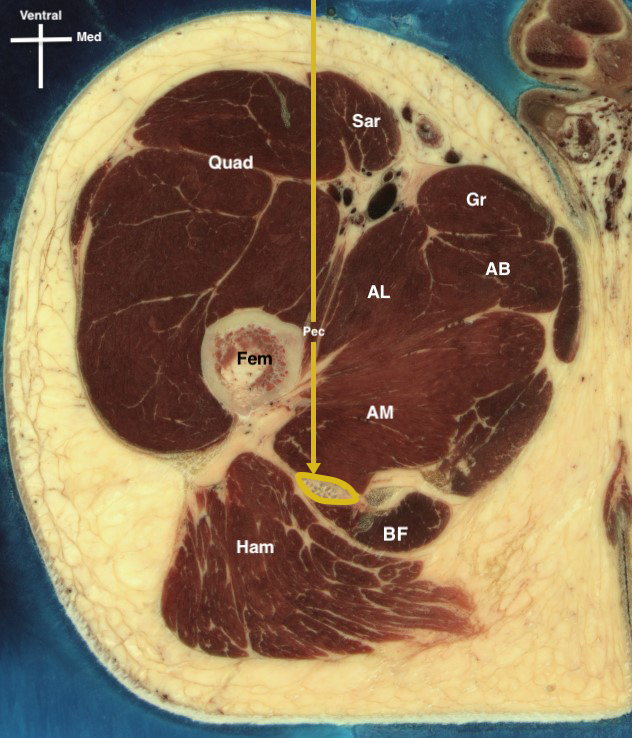 Ultrasound-guided blockade of the sciatic nerve from an anterior approach should always be performed in conjunction with nerve stimulation. Place the patient in supine position with the leg to block in neutral position (so no external rotation). This is recommended based on a cadaver study that found that internal rotation of the leg facilitated needle insertion during the anterior approach because of rotation of the lesser trochanter to posterior, [6] and the same is true for a neutral position. Further, magnetic resonance images showed that in supine position, 4 cm distal to the lesser trochanter, the sciatic nerve is consistently medial to the femoral shaft. [7] Therefore, with insertion points distal to the original Beck landmark, needling will not be obstructed by the lesser trochanter [1] (Figure 3). Clean the thigh with chlorhexidine from the inguinal crease down to the distal third, and drape the area completely if inserting a perineural catheter. A curved linear probe in the range of 2–5 mHz is superior for deep tissue penetration. 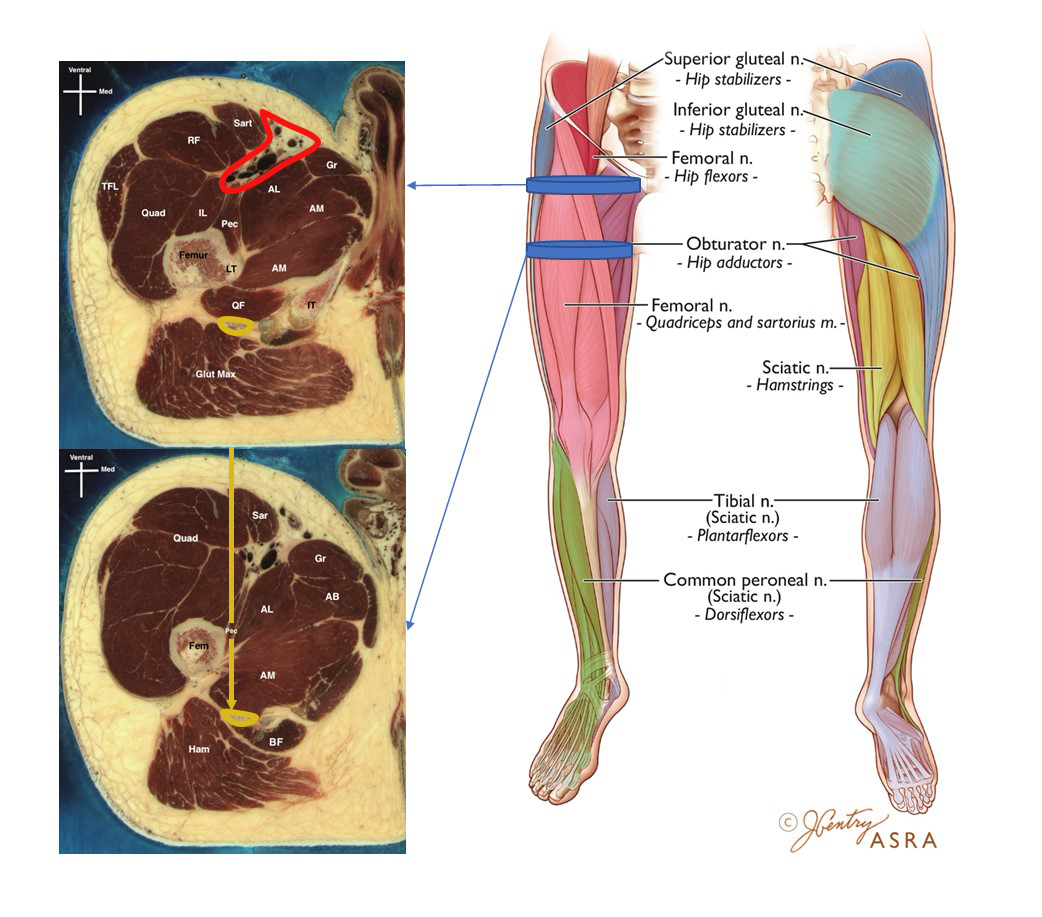 Before placing the ultrasound probe on the patient’s thigh, palpate the intermuscular groove between the sartorius and the rectus femoris. Place the ultrasound probe longitudinally, perpendicular to the bed surface around 10 cm distal to the inguinal crease, on that groove and apply pressure. This parts the muscles and also helps push the profunda femoris artery further medial and out of the needle trajectory. Set the ultrasound machine’s depth to maximum and place a hand underneath the patient’s thigh and push upward to aid structure identification.

Reduce the depth again according to how deep the target structure is expected (on most patients, the authors suggest starting with the depth set to 10 cm). The first sonoanatomical landmark will be the femoral shaft, which is easily identifiable by the dark bony shadow it casts. Move the probe medially while never losing the perpendicular angulation. This is important mainly for in-plane needle advancement, because even the slightest angulation makes maintaining needle visualization in the deeper structures more difficult. The sciatic nerve is visible as a long, thick, cable-like structure embedded in between two large muscles, namely the adductor magnus above and gluteus maximus or biceps femoris beneath (Figure 4). Color doppler is usually helpful in identifying any vessels traversing the path of the needle trajectory. The ability to change in-plane needling direction (eg, from cephalad to caudad, from caudad to cephalad) is useful in avoiding any vessel.

Figure 4: Ultrasound longitudinal view of a sciatic nerve in the anterior approach. The typical anesthetic spread forms a thin hypoechoic line on top of the nerve.

The first muscle stimulation is often in fibers of the femoral nerve from the quadriceps contracting. Advance the needle further and appreciate the contraction of the adductor magnus muscle on the ultrasound image. With further advancement, the stimulation of the adductor magnus ceases and the twitch to the foot (dorsiflexion or plantar flexion) will indicate a successful needle localization. If the gluteus maximus or biceps femoris is stimulated, the needle is too deep and needs to be retracted. The stimulating threshold will be different, especially in patients with pre-existing neuropathy. Insert a 6-inch (150 mm) insulated nerve block needle in plane with the nerve stimulation initially set to 2 mA. The stimulation threshold can vary, especially in diabetic patients or those with pre-existing neuropathy (Video 1). The needle can be inserted caudad to cephalad or vice versa in an in-plane approach. For a single shot, the needle direction is typically caudad to cephalad in an in-plane approach, which offers the advantage of local anesthetic spread to the posterior femoral cutaneous nerve and is especially important for tourniquet pain.

At this point, turn the nerve stimulation current down to 0.5 mA. If nerve stimulation is preserved, give a test bolus of dextrose 5% in water to visually identify the correct positioning of the needle tip. Similar to fascial plane blocks, verify that the needle tip advances beyond the adductor magnus muscle. The longitudinal view is of extreme value in identifying suitable needle positioning, which will lead to the injectate spread as a thin, hypoechoic, horizontally expanding line that opens the fascia both in the cephalad and caudad direction, anterior to the sciatic nerve (Video 2). This is also known as expanding the view.8

The injectate spread will also push the muscle upward more than the nerve downward. This specific spread pattern of injectate is a very powerful tool to ascertain the correct needle placement, especially in the context of the deep structures. The sciatic nerve lies in an intermuscular canal, so getting the needle tip to rest in closest proximity (nerve stimulation down to 0.2 mA) is not necessary. Nerve stimulation is a guiding tool mainly for structure identification, safety, and confirming the correct vicinity of the needle tip.

A Seldinger approach using a Tuohy needle is usually warranted rather than the catheter-over-needle technique because of the depth of the sciatic nerve. For insertion, the cephalad-to-caudad approach places the catheter farther away from a tourniquet and the surgical field. After placing the tip of the Tuohy needle above the sciatic nerve, inject dextrose 5% water with nerve stimulation to confirm correct positioning before threading the catheter in place, ideally 3 cm beyond the end of the needle. Infuse local anesthetic either purely continuously at rates of 6–10 mL/ hr or continuous with intermittent bolus administration. In our institution, we run an infusion of 1 mL/hr to keep the catheter patent and then administer a bolus of 15 ml ropivacaine 0.2% every 2 hours.

Anterior sciatic nerve block is an advanced-level block. However, once learned, it can quickly become the sciatic block of choice for many lower-extremity surgeries because of its practical convenience.