Curb Your Enthusiasm: The RAPTIR Could Bite

The technique is performed with the patient supine and the arm adducted. A high-frequency linear ultrasound transducer is placed inferiorly to the clavicle just medially to the coracoid process in the parasagittal plane such that the axillary vessels and cords of the brachial plexus are viewed in cross-section (Figure 1).[1],[2] In this short axis view, the lateral cord appears in the anterocranial position, posterior cord in the posterocranial position, and median cord in the posterocaudal position (dependent on probe orientation and anatomic variation).[4] A needle insertion point is chosen in the supraclavicular fossa, between the clavicle and trapezius, so that the needle will pass behind the clavicle and enter the ultrasound image nearly parallel to the transducer (or perpendicular to the beam) (Figure 2).[1],[2] A long (80-100mm) needle is required given the distance from the supraclavicular fossa to the axillary artery. Because of the generally superior needle visualization achieved via a small angle of incidence of the needle relative to the ultrasound probe, an echogenic needle is generally not necessary.[5] A volume of 25-40ml of local anesthetic is then injected to achieve perivascular spread.[2],[6]

Why is RAPTIR Becoming More Popular?

A recent systematic review including 25 randomized trials and 1,948 patients found no differences in success rate between supraclavicular, infraclavicular, or axillary brachial plexus blocks.[7] Infraclavicular block advantages include the ability to place a secure catheter and a decreased incidence of diaphragmatic paresis when compared to supraclavicular blocks.[2],[8],[9] Infraclavicular blocks are also associated with less tourniquet pain, more complete musculocutaneous nerve block than single injection axillary block, and decreased time to perform when compared to multiple injection axillary block.[10] However, needle visualization is often poor because of the steep angle of insertion with the conventional approach (Figures 3 and 4).[11] The median angle of insertion is 50 degrees (ranging from 33–60) and is made worse in obese patients, with the angle of insertion correlating with body mass index.[11] The RAPTIR block was developed to overcome this needle visualization challenge.[1] 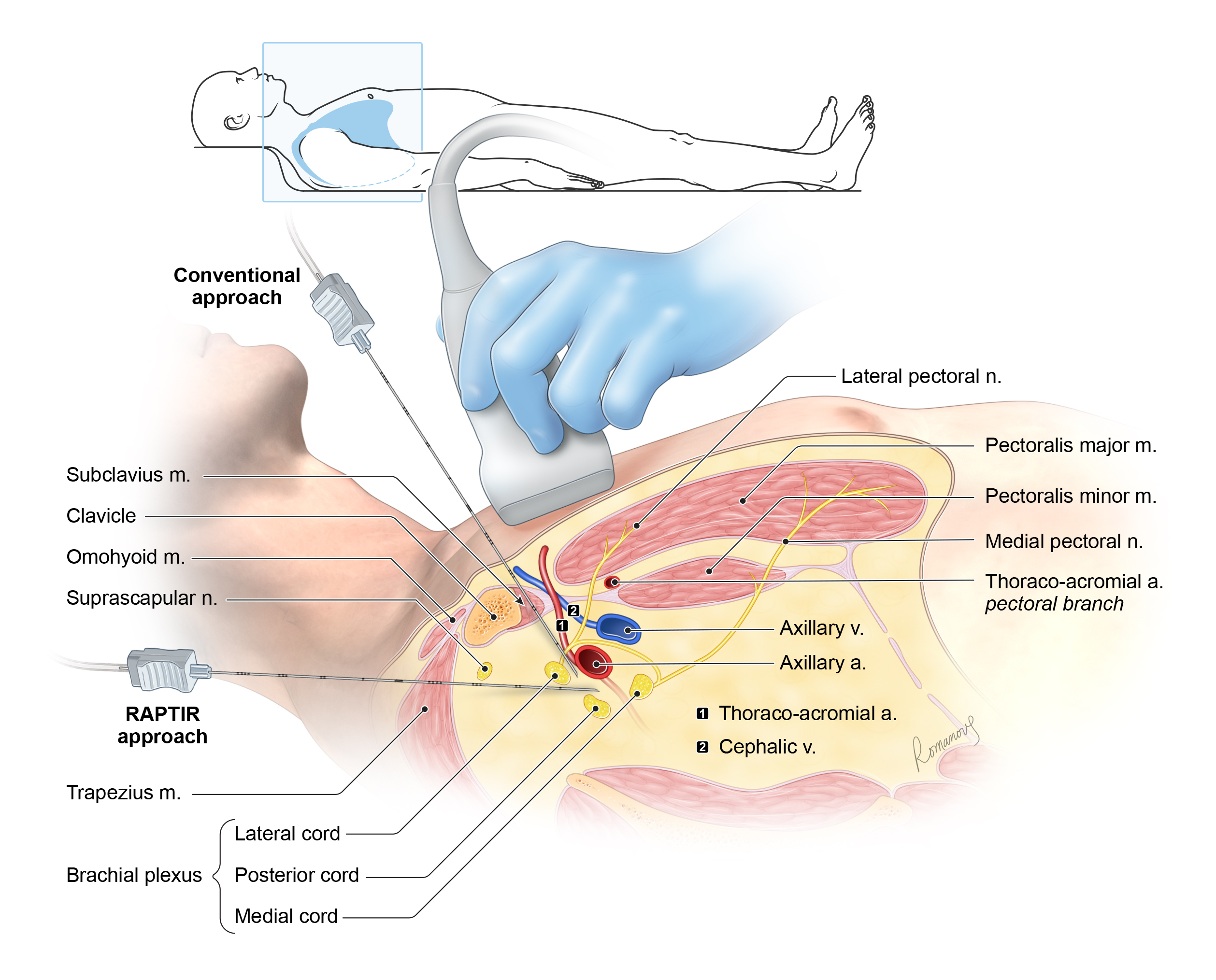 A randomized trial comparing the conventional (coracoid) infraclavicular block to the RAPTIR block confirmed that needle shaft and tip visualization were significantly better with the RAPTIR technique, with similar success rates and patient satisfaction.[6] It also found that block performance time and paresthesias encountered during block placement were reduced when using the RAPTIR approach.[6] This may be because the lateral cord is commonly located in the needle path of a conventional infraclavicular block.[12]

The horizontal needle path of the RAPTIR block prevents that problem and avoids both the pectoral branch of the thoracoacromial artery and the cephalic vein (Figure 4).[12] The position of the needle relative to the clavicle is also advantageous for patients with limited range of shoulder motion or those with a painful upper extremity injury.[12],[13] Whereas arm abduction improves needle angle and visualization in the conventional infraclavicular block, arm adduction improved needle insertion in the RAPTIR block.[5],[14] For this reason, RAPTIR has been advocated as a pain control option for patients in the emergency department with upper extremity injury.[13]

RAPTIR compares favorably to the supraclavicular approach, and a recent randomized controlled trial demonstrated similar success rates, pain control, and patient satisfaction.[15] Performance time for the RAPTIR was statistically longer. However, the absolute difference for performance time was less than 2 minutes and was therefore considered to not be clinically relevant.[15]

How Does the RAPTIR Bite?

Despite those advantages, the RAPTIR block is not without potential drawbacks. The major concern with the retroclavicular path is that the needle passes through an acoustic shadow behind the clavicle. Previously published cadaveric studies have demonstrated that the suprascapular nerve and suprascapular vein are vulnerable to injury because they are located along the needle trajectory of a RAPTIR block and in the clavicle’s acoustic shadow.[16] Neuromuscular stimulation during needle advancement through the acoustic window and monitoring for external rotation of the shoulder (supraspinatus and infraspinatus muscle stimulation) may reduce the incidence of inadvertent nerve injury.[16] 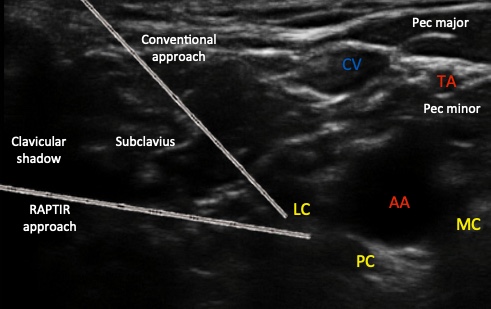 Infraclavicular brachial plexus blocks (whether conventional or retroclavicular) are classified as high risk for bleeding because of their noncompressible position under the clavicle and are not recommended for anticoagulated patients.[17] Additionally, because of the acoustic shadow casting a blind spot, pain physicians may advance the needle further than expected before locating it with the ultrasound transducer. That past pointing could result in nerve or vascular puncture or even pneumothorax. We recommend that the distance from the intended needle insertion point to the edge of the ultrasound transducer be measured externally once the optimal image has been obtained. Mark the needle shaft at that distance from the tip by grasping the shaft between index and thumb (Figure 5). Advance the needle past that point only once the tip is visualized in the ultrasound image.[5] Given that the needle path is horizontal and directed posteriorly to the axillary artery, spread to the lateral cords manifesting as a long onset time or may be reduced in the distribution of musculocutaneous nerve with RAPTIR, compared to conventional infraclavicular approach.[6] 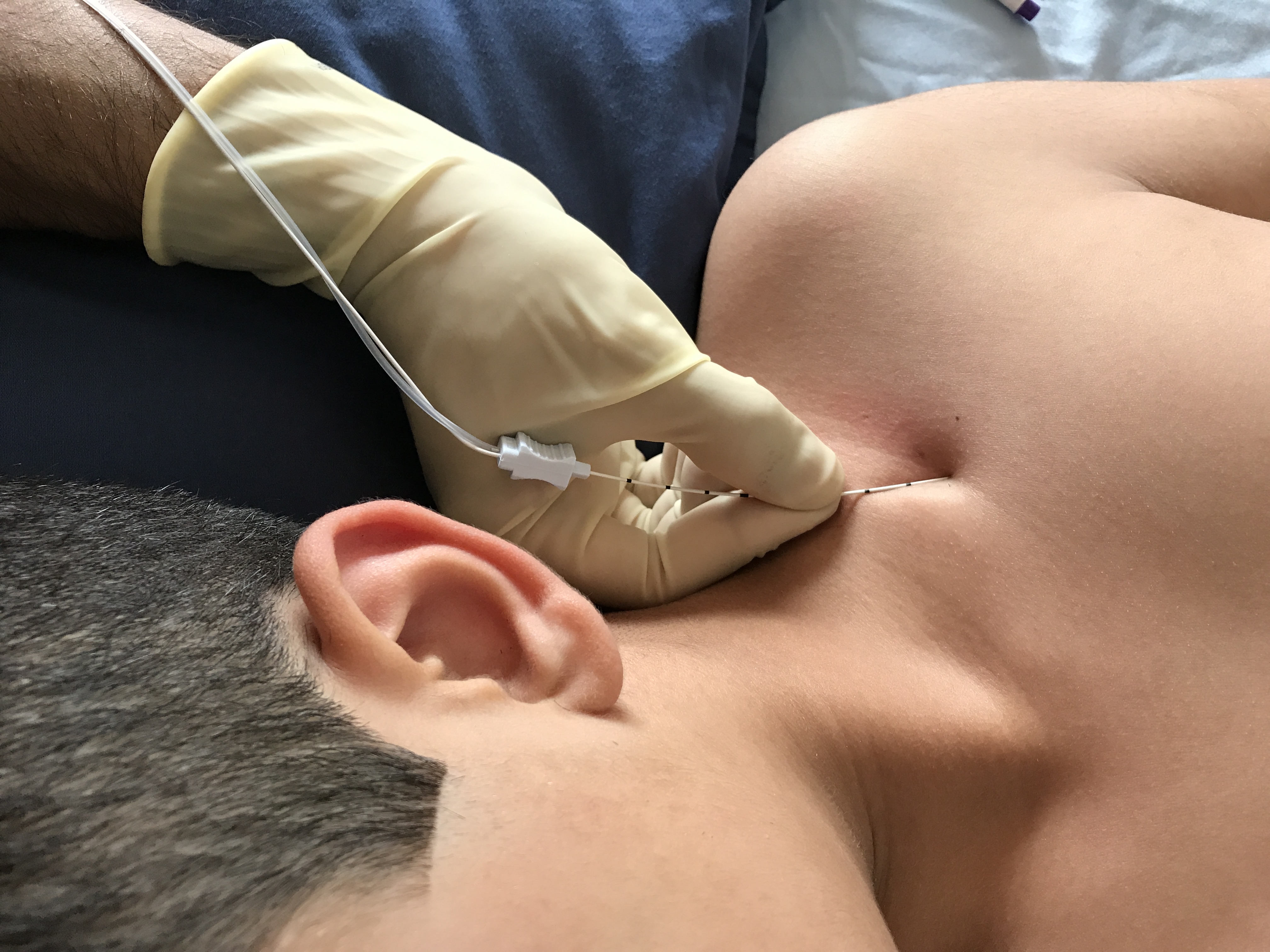 Figure 5: Measurement of clavicle thickness before needle insertion for RAPTIR (retroclavicular approach to the infraclavicular region)

One cadaver dissection showed less dye surrounding the medial and lateral cords than the posterior cord when using a retroclavicular approach.[18] However, as mentioned previously, a randomized trial found similar rates of sensory and motor block success, surgical success, supplementation, and analgesic use.[6] To maximize perivascular spread during a retroclavicular approach, we suggest using our 5-6-7 technique.[5] Advance the needle past the 6-o’clock point to the axillary artery as viewed in the ultrasound image. At 5-o’clock (posterocaudal) position, deposit 25% of the local anesthetic. Withdraw the needle and deposit 50% of the local anesthetic at the 6-o’clock position and 25% at the 7-o’clock position (Figure 6).

Another potential problem is obtaining an optimal ultrasound image in a position that allows for the needle to pass easily behind the clavicle. The contour of the clavicle is highly variable, increasing the difficulty of a retroclavicular approach in a subset of patients with an acutely angulated clavicle, although the overall block performance time is not significantly different.[6],[19],[20] We suggest placing the patient’s arm in an adducted position with slight downward traction to improve clavicle orientation.[5] 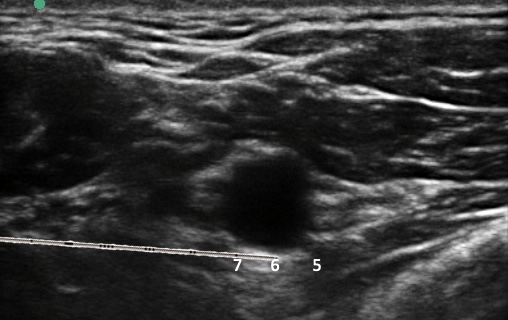 Over the past few years, the RAPTIR block has seen rapidly growing enthusiasm. Although the approach offers some advantages to the conventional infraclavicular technique, it also carries some unique risks. We recommend that this relatively new technique should be used selectively rather than as a wholesale adoption above other methods of infraclavicular and other approaches to brachial plexus blockade, with the benefits and risks of the technique being considered in the context of patient habitus and comorbidities.

Specifically, the RAPTIR approach is well suited for patients where the needle insertion angle is expected to be steep because of a thick chest wall, limited range of shoulder motion, or securing an indwelling catheter.[23] The approach is less well suited for those with highly angulated clavicles, full supraclavicular fossae, and thin chest walls. Further research is needed, and we look forward to the results of a multicenter, randomized, noninferiority trial comparing conventional (coracoid) infraclavicular blocks to the RAPTIR method.[24]

We would like to thank the Department of Anesthesia, Perioperative Medicine, and Pain Management at Dalhousie University, Nova Scotia Health Authority, in Halifax, Nova Scotia, Canada, for its support by providing us a $500 grant for the medical illustrations in this article.