(Editor’s note: Research grant recipients are asked to provide updates on their projects at the ASRA annual meetings. Dr. Fung, who received the Graduate Student Award in 2018, was to have provided his update at the 45th Annual Regional Anesthesiology and Acute Pain Medicine Meeting. However, the meeting was cancelled due to the COVID-19 pandemic.)

Inadequate acute postoperative pain management continues to be a global healthcare problem. The consequences of poorly managed postoperative pain include delayed recovery, increased morbidity, risk of persistent pain development, risk of chronic opioid use, and an increased economic burden of medical care.[1] The standard approach to pain management in clinical practice is multimodal analgesia. This involves the use of several classes of analgesics – in particular, nonsteroidal anti-inflammatory drugs (NSAIDs), systemic opioids, and local anesthetics. NSAIDs inhibit peripheral cyclooxygenase enzymes and produce mild-to-moderate analgesia; however, they also produce notable gastrointestinal and cardiovascular complications, which limit their clinical use. Systemic opioids mainly act centrally and are effective for moderate-to-severe pain but are also associated with significant adverse effects and risks. In particular, their propensity for producing death from respiratory depression, abuse, dependence, and addiction is highlighted in a dramatic fashion by the current opioid crisis.[2] Thus, there exists a great clinical need for effective and safe non-opioid analgesic alternatives for the management of acute postoperative pain.

One promising solution lies with local anesthetics. These agents block the excitability of nerves, principally by blocking voltage-gated sodium channels.[3] Indeed, local anesthetics have been the mainstay in regional anesthesia and provide superior control of postoperative pain.[4] Since the first public demonstration of local anesthesia with the aminodiester, cocaine, remarkable strides have been made in local anesthetic drug development. From the discovery of the first aminoamide, lidocaine, to the development of ropivacaine as a less cardiotoxic agent than racemic bupivacaine, it is evident that this field continues to search for the “Holy Grail” of local anesthetic pharmacology. Specifically, the latter would be an agent that provides long-lasting nociceptive-specific blockade after a single-shot with minimal local and systemic toxicity. Unfortunately, such an agent still does not exist in the local anesthetic armamentarium.

While effective, currently available local anesthetics are limited by their duration of action, potential for local and systemic toxicity, and, when used for postoperative analgesia, undesirable motor blockade due to their relative inability to block pain-selective transmission. Although there have been a number of efforts to extend the duration of action such as the use of various adjuvants and liposomal formulations, the magnitude of block prolongation is still limited.[5, 6] Indwelling perineural catheters as another option are associated with feasibility constraints, are resource-intensive and costly, and have complications of their own.[7] Additionally, all clinically used local anesthetics produce various flavors of toxicity, which further emphasizes the need for the development of longer-lasting and safer local anesthetic agents.

Research at the Hugill Anesthesia Research Centre at The University of British Columbia (UBC) found that a quaternary derivative of lidocaine, QX-314, produces robust nociceptive, sensory, and motor blockade of long duration in animals in vivo.[8, 9] These discoveries broke with traditional pharmacological dogma that quaternary agents do not possess local anesthetic effects due to their permanent positive charge and presumed associated inability to cross biological membranes. While the work of others highlighted the potential ability to selectively navigate QX-314 into nociceptive nerves,[10] subsequent research at the UBC Hugill Centre involving intrathecal and systemic administration of QX-314 raised concern about its toxicity profile.[11],[12] 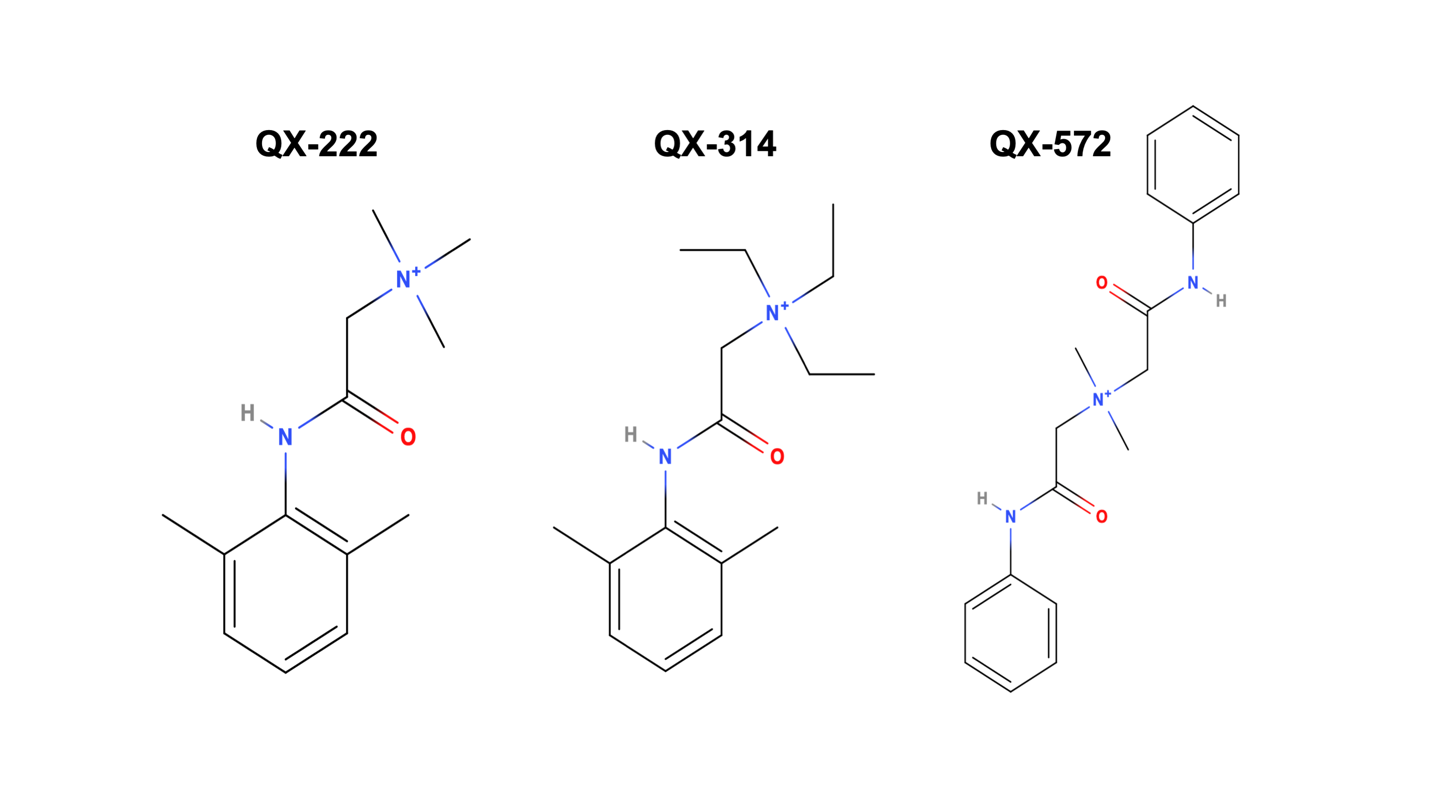 However, other quaternary lidocaine derivatives exist, such as QX-572 and QX-222 (Figure 1), whose local anesthetic utility remains unknown. Thus, my inspiration for the work described here stems from both the clinical need for non-opioid alternatives and obligation to find longer lasting and safer local anesthetic agents. With the generous support from the 2018 (inaugural) ASRA Graduate Student Award, the work entitled, Motor Block Produced by Quaternary Lidocaine Derivatives: A Preclinical Comparison of QX-572 and QX-222 versus QX-314 in Mice was made possible to investigate motor blocking effects of other promising quaternary local anesthetic candidate compounds that may in the future be used for improved postoperative pain relief.

In this ASRA-supported project, I set out to apply clinical trial standards to basic science research and conducted a randomized, double-controlled, and blinded in vivo animal study to test the hypothesis that, similar to QX-314, QX-572 and QX-222 will produce long-lasting motor blockade compared to lidocaine. I found that all three quaternary compounds concentration-dependently produced motor blockade. Moreover, I found that, unlike QX-314 and QX-572, QX-222 does not produce long-lasting motor blockade. We suspect that differences in molecular hydrophobicity, due to chemical structure differences, may modulate the duration and potency of these quaternary compounds. The shorter N-alkyl groups of QX-222 may confer more favorable sensory-motor nerve separation for this agent compared to QX-314. From a clinical point of view, the relative absence of prolonged motor blockade combined with long-lasting nociceptive blockade would be a highly desirable property for postoperative analgesia. Future studies that investigate other quaternary compounds which are structurally similar to QX-222 may reveal more suitable compounds for transition into clinical practice.

I would like to express my sincere gratitude to ASRA for establishing this award for young graduate and medical student trainees and, in particular, for giving me this wonderful opportunity by selecting me as its inaugural recipient. While I was saddened to be unable to present the results of these ASRA-supported studies in person at this year’s annual meeting in San Francisco due to the COVID-19 pandemic, the receipt of a “Best of Meeting Award” and opportunity to present virtually via one of the live Twitter sessions on April 24, 2020, as well as eposter format, have been the greatest honors of my academic career. Thank you so very much for the support, and I look forward to seeing everybody in Florida next year.

As a supervisor and mentor, I would like to thank and commend ASRA for this fantastic initiative to establish an annual Graduate Student Award. I believe that this illustrates the Society’s wisdom and foresight to support young individuals early in their academic development as the return on investment – and snowballing effect – from such awards is enormous, permanent, and occurs at so many levels. I am immensely proud of Desmond’s accomplishments and am particularly delighted to announce the he successfully passed his thesis defense (also held virtually, a first for all of us) with flying colors on April 3, 2020.

While there unavoidably are bumps in the sometimes-long road to discovery, the support of these types of laboratory studies is instrumental in making the future availability of a local anesthetic that safely provides long-lasting nociceptive-specific blockade after a “single shot” a tangible reality. Professor David G. Lambert of the University of Leicester said in 2008 “A speciality without a research base and for anaesthesia this should include the basic sciences sits on the precipice of de-skilling and an almost inevitable plummet to into the service only abyss.”[13] I believe that this thought is even more important now as it was back then. Again, kudos to ASRA and my sincere thanks for supporting and engaging the next generation early – our future colleagues and doctors!