How I Do It: Stellate Ganglion Blocks

The stellate ganglion block is a diagnostic and therapeutic modality commonly used for patients with complex regional pain syndrome of the upper extremity, phantom limb pain, neuropathic pain, atypical facial pain, arterial vascular insufficiency of the upper extremity, hot flashes, and psychiatric disorders such as post-traumatic stress disorder, as well as to temporarily interrupt sympathetic stimulation in the heart for electrical storm and angina.[1-3]

Sympathetic fibers from the head, neck, upper extremities, and heart arise from the first thoracic segment and ascend in the sympathetic chain to synapse in the superior, middle, and inferior cervical ganglion. The stellate ganglion is a sympathetic ganglion formed by the fusion of the inferior cervical and first thoracic ganglion. It is located anterior to the transverse process, medial to the scalene muscles, and lateral to the trachea, thyroid, esophagus, carotid artery, and internal jugular vein. An abnormal connection between the sympathetic and sensory nervous system can lead to sympathetic mediated pain.

The therapeutic effects from a sympathetic block may result for the interruption of this neuronal connection.[4] Many techniques have been described to block the stellate ganglion which may account for the variability in response and efficacy. Historically, stellate ganglion blocks were performed blindly by palpating the prominent anterior tubercle of the transverse process of C6 (Chassaignac’s tubercle),[5] but this technique was associated with significant risk of injury to the surrounding vascular and soft tissue structures. Fluoroscopic-guided stellate ganglion blocks improve delineation of bony anatomy but not soft tissue. Image-guided stellate ganglion blocks by computed tomography (CT)[6] and magnetic resonance imaging[7] offer better visualization but are neither cost nor time efficient. Furthermore, CT exposes the patient and the provider to increased radiation. A method that has gained popularity is ultrasound-guided blockade of the stellate ganglion, which offers precise anatomical targeting while minimizing unintentional puncture of vital structures and reducing local anesthetic volume. This method was initially described by placing the needle in the region of the transverse process of C6.[8] It was later refined with needle placement at C6 beneath the prevertebral fascia over the longus colli muscle.[9] We describe an approach that will allow practitioners to re-confirm the ultrasound sonoanatomy of the stellate ganglion by properly identifying the C6 from C7 transverse process by performing a nerve root scan.

Vertebral ultrasonography can give rise to chaotic imaging from acoustic shadowing as the ultrasound wave strikes bone and becomes reflected. We describe an approach that will allow practitioners to differentiate the C6 from the C7 transverse process by tracing the nerve cephalad while identifying the differences between the tubercles of C6 and C7. Ultrasonography provides an exceptional capability to depict nerve roots and allows for proper identification at the appropriate level.[10]

The patient is placed in a supine position with the head turned to the opposite side. The high-frequency linear transducer is placed in a short-axis view proximal to the clavicle. The subclavian artery is identified, and the supraclavicular plexus is seen as a hypoechoic bundle superior and posterior to the artery (Figure 1). 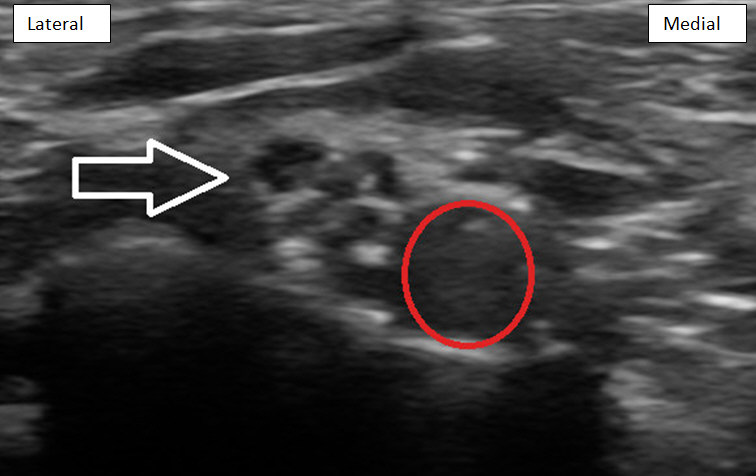 Figure 1: Supraclavicular plexus (white arrow) and subclavian artery (red circle).
The transducer is moved in a cephlad and medial fashion to identify the interscalene plexus between the anterior and middle scalene muscles (Figure 2). 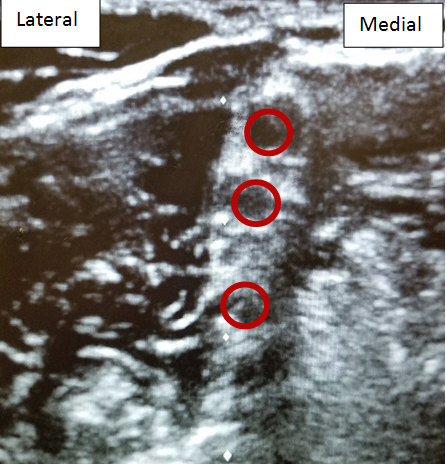 Subsequently the nerve roots can be followed as they return to their corresponding intervertebral foramen by moving the transducer slightly medial. In the traditional “stoplight sign” orientation of the nerve roots, C5, C6, and C7 can be identified by their relative vertical position. The C7 nerve root can then be easily traced and visualized as it enters the foramen in front of the posterior tubercle (Figure 3). 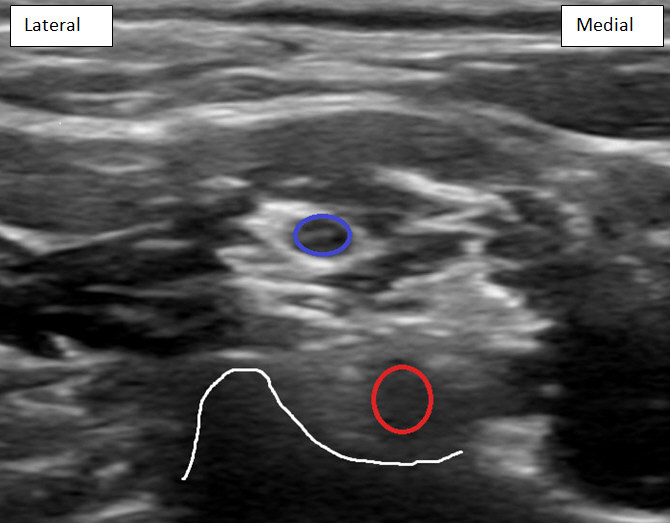 The transducer is moved cephlad and slightly lateral to visualize C6 nerve root entry from the interscalene plexus to the foramen between the prominent anterior tubercle and shorter posterior tubercle (Figure 4). 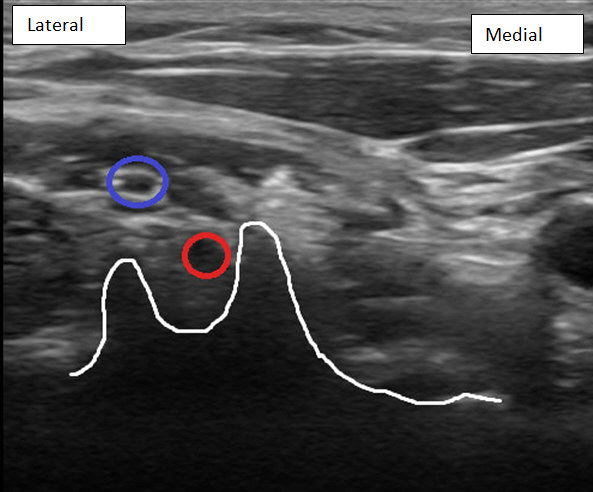 Once the transverse process of C6 is identified and confirmed, a 22 gauge 1.5″ (40 mm) spinal needle is advanced using an in-plane technique from lateral to medial. Local anesthetic is deposited beneath the prevertebral fascia and above the longus colli muscle (Figure 5). 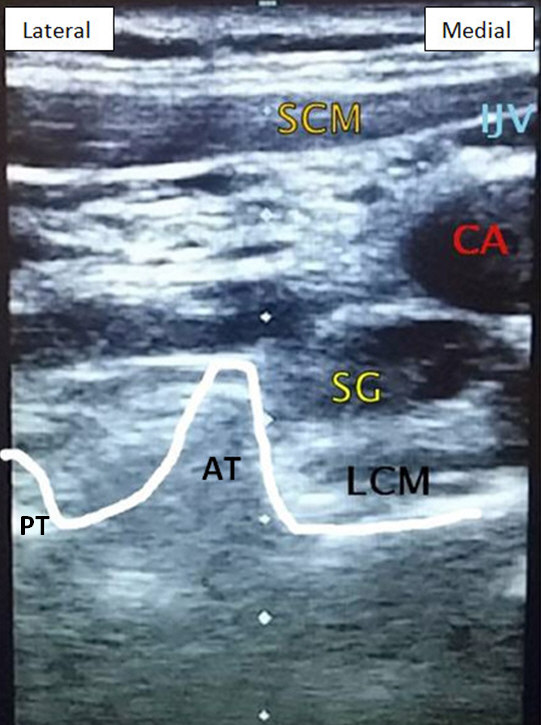 A technical challenge that practitioners may encounter when performing an ultrasound-guided stellate ganglion block is the proper identification of the C6 and C7 transverse process. We recommend supplementing this technique by scanning from the supraclavicular plexus to the interscalene plexus and following the nerve roots into the corresponding foramen. This approach will re-confirm that the C6 and C7 transverse process are properly identified.