How I Do It: Genicular Nerve Blocks for Acute Pain

Regional analgesia is a foundational component of multimodal postoperative pain management following knee replacement surgery (TKA). Targeted, motor-sparing regional techniques such as adductor canal blocks and posterior capsule infiltration (aka IPACK) provide good pain control while facilitating early ambulation and rehab.1,2 However, many patients continue to experience significant pain after TKA, even when these two blocks are performed. This is not surprising, as the anterior knee is innervated by the saphenous nerve, articular branches of the nerves to the three vastus muscles (medialis, intermedius, and lateralis), and at least four genicular nerves. Only two of these nerves (the saphenous and nerve to vastus medialis) are covered by a standard adductor canal block. Targeted genicular nerve blocks (or ablative procedures) have been a standard chronic pain intervention for arthritic pain in the past.3 Recently, it was shown that the addition of genicular nerve blockade for TKA patients can significantly reduce postoperative opioid requirement,4 and since these blocks are simple and quick to perform, they are an impactful addition to our block pathway for knee arthroplasty patients.

An overview of knee innervation is presented in Figure 1. The posterior knee is innervated largely by the popliteal plexus, derived from the tibial and obturator nerves. The anterior knee joint and capsule are supplied by four branches of the femoral nerve (the saphenous nerve and articular branches of the nerves to the three vasti), as well as multiple branches from the sciatic nerve. The cardinal genicular nerves are named for their position relative to the knee joint: the superomedial genicular nerve (SMGN), the superolateral genicular nerve (SLGN), and the inferomedial (IMGN) and inferolateral (ILGN) genicular nerves. These genicular nerves “wrap around” from behind to the anterior aspect of the knee, and their consistent proximity to the metaphysis of the femur and tibia make them easy targets for blockade. Some cadaveric sources describe the superomedial genicular nerve as originating from a branch of the femoral nerve; while interindividual variation exists, the upstream origin of this branch is not important from a clinical perspective, as its eventual location just proximal to the medial epicondyle is consistent. 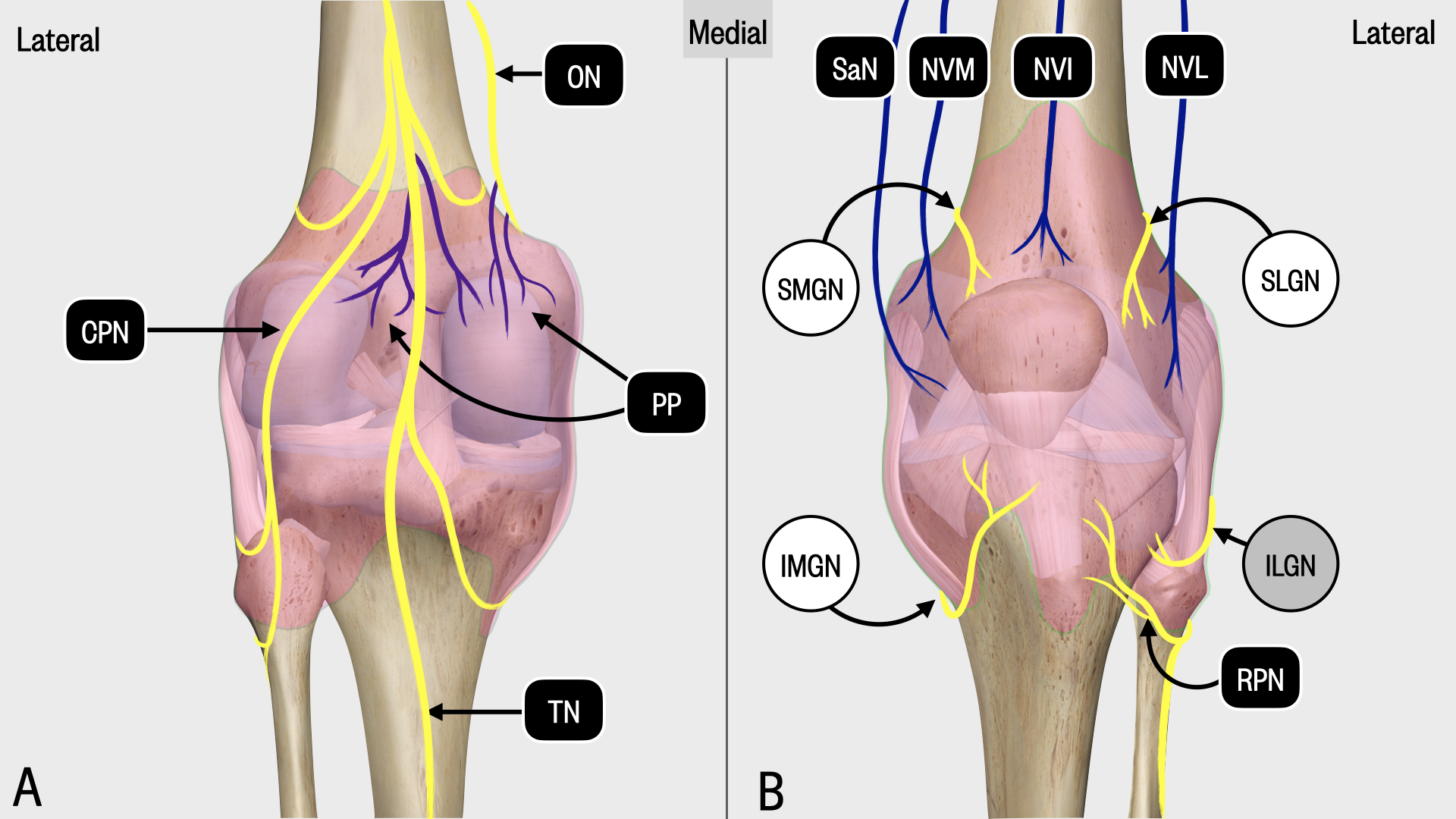 Our genicular nerve block technique involves blockade of three of the genicular nerves (superolateral, superomedial, and inferomedial) as they travel around the femur and tibia toward the anterior capsule. We omit the inferolateral genicular nerve because it runs in close proximity to the common peroneal nerve, and blockade at this site may result in temporary foot drop. Finally, we also block the nerve to vastus intermedius, as it lies on the anterior surface of the femur just proximal to the patella, making it an easy additional target.

We perform genicular nerve blocks using a high-frequency linear transducer with patients in the supine position. For each of the three genicular nerves, the ultrasound transducer is placed on the lower limb in the sagittal orientation so that the bony cortex of either the femur (for the SMGN and SLGN) or the tibia (IMGN) is visualized (Figure 2). The position of the transducer is then adjusted, often by sliding toward the joint until a slight sloping of the epicondyle is seen near the metaphyseal-epiphyseal line. With proper probe placement for the SMGN and SLGN, the centerline of the probe will approximately align with the superior aspect of the patella. In this position, a small genicular artery often can be observed on the surface of the bone (although not always). For the IMGN, placement of the probe on the proximal tibia will reveal a shallow “bowl” through which the nerve courses. After the correct view is obtained and the skin is disinfected, we insert a 21G insulated block needle in an out-of-plane approach until contact is made with the bone. Following negative aspiration, 5 mL of local anesthetic is deposited. Under ultrasound visualization, the local anesthetic can be seen spreading along the bone and elevating the overlying soft tissue (Figure 3).

Figure 3. Superomedial genicular nerve block pre-injection (A) and post-injection (B), showing the spread of local anesthetic (blue arrow) along the cortex of the distal femur.

Nerve to the Vastus Intermedius

For the nerve to vastus intermedius, the transducer is placed about 3 cm superior to the patella in the transverse plane. The femur is visualized in short axis (Figure 2). Similar to the three genicular nerves, the needle is inserted in an out-of-plane approach until contact is made with the femur. Local anesthetic spread (5 mL) should be observed along the bone with elevation of the vastus intermedius muscle.

We recommend using a long-acting local anesthetic to leverage the effect of the block for as long as possible. In our practice, we will typically prepare a 20 mL syringe of 0.25% bupivacaine with 1:400,000 epinephrine and 2 mg dexamethasone and use 5 mL of that mixture at each site.

Genicular nerve blocks (including blockade of the SMGN, SLGN, IMGN and NVI) are an effective and efficient way to improve postoperative analgesia for patients undergoing TKA.4 Since the technique involves bony contact as the end-point for needle advancement (in contrast to a potentially difficult-to-visualize, nuanced fascial plane), these blocks are very easy to teach and learn. They also can be performed quickly — all four blocks take less than two minutes to perform in our practice.

Although not a complete answer on their own, genicular blocks address a “missing component” in traditional protocol of adductor canal and iPACK blocks, and we have observed earlier ambulation, improved pain control, and better overall recovery in this population since they have been implemented. 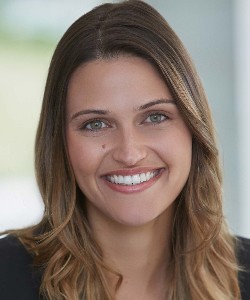 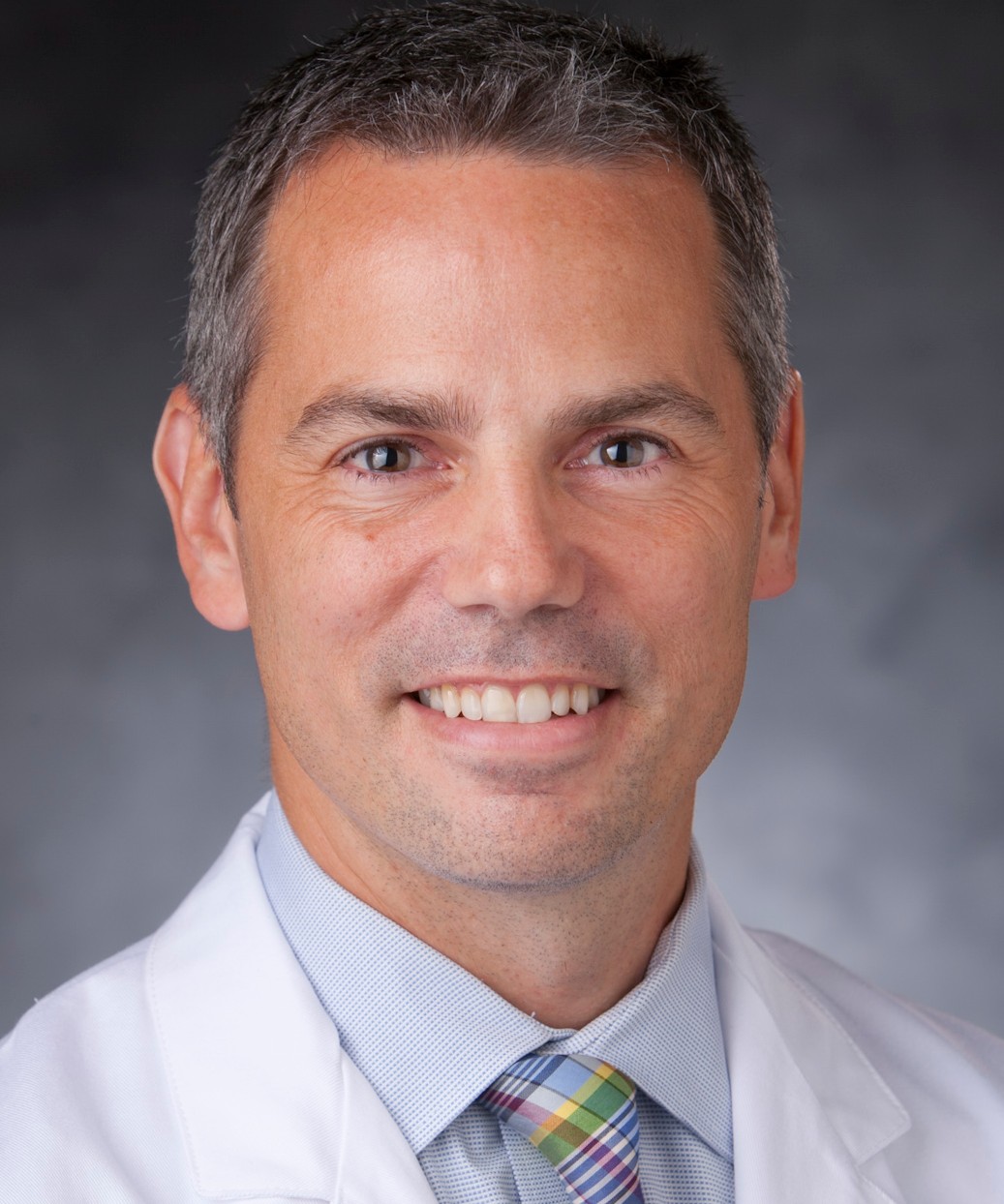 Jeff Gadsden, MD, FRCPC, FANZCA, is an associate professor of anesthesiology at Duke University School of Medicine in Durham, NC.