Genitofemoral nerve, together with iliohypogastric and ilioinguinal nerves, are known as ‘border nerves’ because these nerves supply the skin ‘bordering’ between the abdomen and thigh. The nerves, because of their course and location, are at risk of injury during lower abdominal surgery (Pfannenstiel incision, appendectomy, inguinal herniorrhaphy) or laparoscopic surgery (trocar insertion). As a result, patients may suffer from chronic post-surgical pain due to nerve injury.[1-2] Patients suffering from postsurgical neuropathy present with groin pain that may extend to the scrotum or the testicle in men, the labia majora in women, and the medial aspect of thigh. Accurate diagnostic blockade of these nerves helps to elucidate the etiology of the clinical problem.

The genitofemoral nerve originates from the first and second lumbar nerve roots (Figure 1). It emerges on the anterior surface of the psoas muscle either as a single trunk or as separate genital and femoral branches.[3] The femoral branch passes laterally over the external iliac artery and then penetrates the fascia lata to enter the femoral sheath. Terminal branches provide cutaneous innervation to the femoral triangle.4 The genital branch also crosses in front of the external iliac artery but then passes through the ventral aspect of the internal ring of the inguinal canal. Anatomical studies show that the genital branch runs between the cremaster and internal spermatic fascia, incorporating with the cremasteric fascia, or lying outside of the spermatic cord.[4-6] Terminal sensory branches may innervate the scrotum and possibly the upper, inner, and medial thigh.[5] 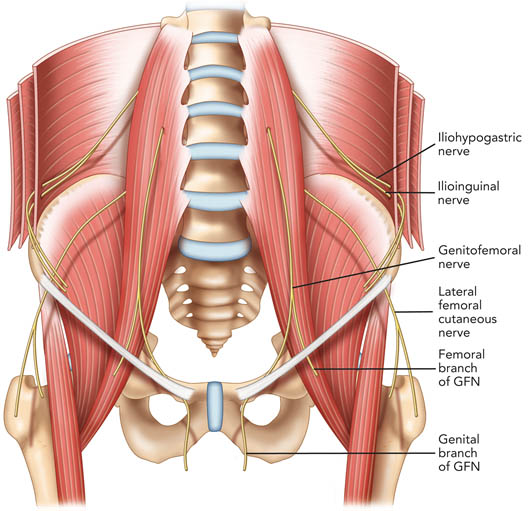 Anatomic studies also have highlighted the variability of the gentiofemoral nerve with respect to its relationship with the ilioinguinal and iliohypogastric nerves and its communication with other nerves, penetration of fascial layers, branching patterns, and dominance patterns.[7] Most commonly, the ilioinguinal and iliohypogastric nerves perforate the abdominal muscle layers lateral and superior to the anterior superior iliac spine where they run between the transversus abdominis and internal oblique muscular layers.

A GF nerve block mainly refers to the blockade of the genital branch, not the main nerve that is ideally blocked at the level of the internal inguinal ring. The landmark for blockade of the genital branch is the pubic tubercle.[8] It is recommended that the needle be directed to a point 1 cm superior and lateral to the pubic tubercle and then a field block is performed. Although the basis of this recommended landmark is not clear, the needle is likely directed towards the spermatic cord in the inguinal canal. With a blind technique, important structures of the spermatic cord (e.g., the testicular artery and vas deferens) or the peritoneum are at risk.

At this point, the femoral artery transitions to become the external iliac artery and runs in a retroperitoneal plane (Figure 3a). Once the external iliac artery is identified, the inguinal canal can be viewed superficial to the vessel as an oval, soft tissue structure (Figure 3a). This contains the spermatic cord in men and the round ligament in women. The canal is then scanned medially so that the final ultrasound transducer position is approximately one finger breadth away from the pubic tubercle. In males, testicular arteries may be identified in the spermatic cord as pulsatile structures and confirmed with the use of colour Doppler. Vessels may be accentuated by asking the patient to cough or perform a Valsalva maneuver which increases blood flow through the pampiniform plexus. The vas deferens may also be identified as a thick, tubular structure.

An in-plane or out-of-plane technique may be used. With an out-of-plane technique, the needle approaches the inguinal canal from the lateral aspect of the transducer. This helps to avoid arterial puncture since the needle tip will be directed away from the artery. Given the anatomic variability of the genital branch of the GFN, 4 mL of local anesthetic is injected within and 4 mL outside the spermatic cord in men (Figure 3b). In women, 5 mL of local anesthetic is injected around the round ligament only. In men, plain local anesthetic without epinephrine is recommended to avoid vasoconstriction of the testicular arteries. Steroid can be added for the management of chronic pain syndromes. 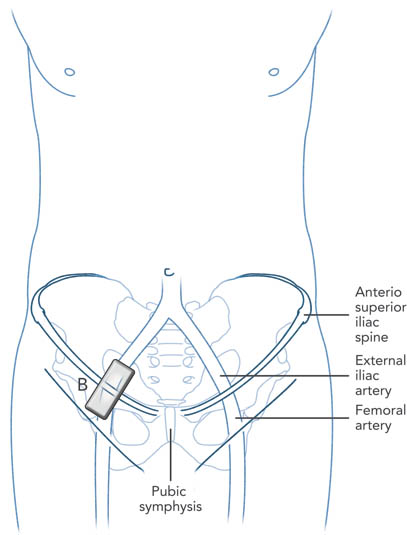 Figure 2. Schematic diagram showing placement of the ultrasound transducer (B) over the inguinal ligament along the long axis of the femoral and external iliac artery. Reproduced with permission from USRA (www.usra.ca) 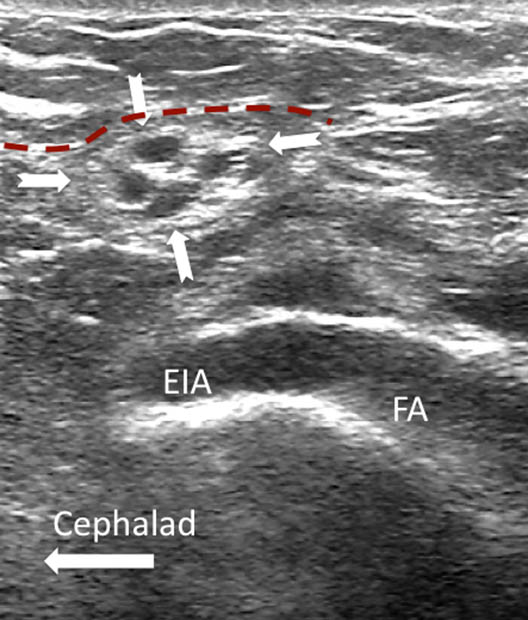 Figure 3a. Long axis view of the femoral artery and the external iliac artery showing the spermatic cord in cross section (outlined by solid arrows) in a male patient. The red dashed line outlines the deep abdominal fascia. Reproduced the with permission from USRA (www.usra.ca) 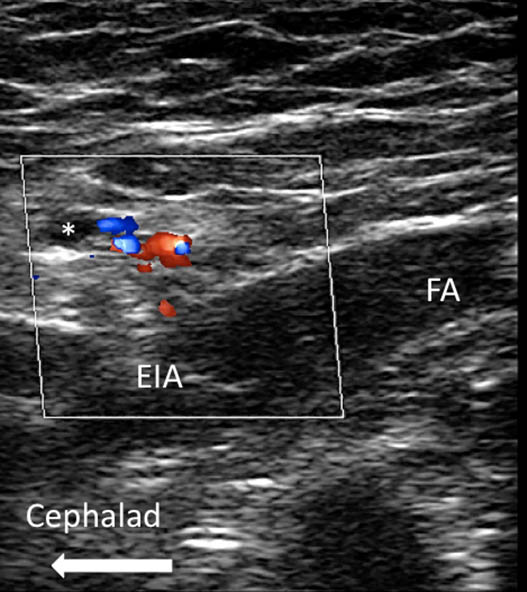 Figure 3b. A similar view as Figure 3a with color Doppler added to show the vessels inside the spermatic cord.

It is considered an intermediate (level 2) block, although it is somewhat hard to classify without any prior study data. The main reason to consider this a level 2 block is the potential risk of intravascular injection.

To obtain a clear delineation of the inguinal canal contents, the highest available frequency transducer is recommended. However, in the obese patient, it may be necessary to use a curvilinear transducer to identify the spermatic cord in males and perform an inguinal canal block.

Among the “border nerves,” the GFN is the smallest. Considering that it branches early, it can be challenging to obtain the sonographic image of either the femoral or the genital division of the GFN in the periphery (i.e., outside the peritoneal cavity). Thus a sonographic landmark may not be reliably found for nerve blockade. However, high frequency transducers up to 18 MHz or more may identify the two branches.

The femoral branch may be accessible considering its topographical location within the lacuna vasorum or next to the saphenous hiatus in the thigh. The genital branch may be visualized if unequivocal delineation of the spermatic cord sheaths is achieved.