Suprascapular nerve (SSN) block, first described in 1941,[1] is indicated for management of acute perioperative pain and a variety of chronic pain in the shoulder. The indications include adhesive capsulitis, frozen shoulder, rotator cuff tear, and degenerative or inflammatory glenohumeral arthritis.[2-6] It is also performed as a diagnostic block for suprascapular neuropathy.[7]

The SSN originates from the superior trunk (C5 and C6) of the brachial plexus, runs parallel to the omohyoid muscle, and courses posteriorly under the trapezius muscle before it passes under the transverse scapular ligament in the suprascapular notch (Figure 1). It then passes beneath the supraspinatus muscle, and curves around the lateral border of the spine of the scapula (spinoglenoid notch) to the infraspinatous fossa (Figure 2).[2] In the supraspinatous fossa it gives off two branches, one to the supraspinatus muscle and one to the shoulder joint as an articular branch. In the infraspinatous fossa it gives off branches to the infraspinatous muscle, and to the shoulder joint and scapula. The sensory component of the SSN provides innervation to approximately 70% of the shoulder joint. The SSN does not have a significant cutaneous branch. 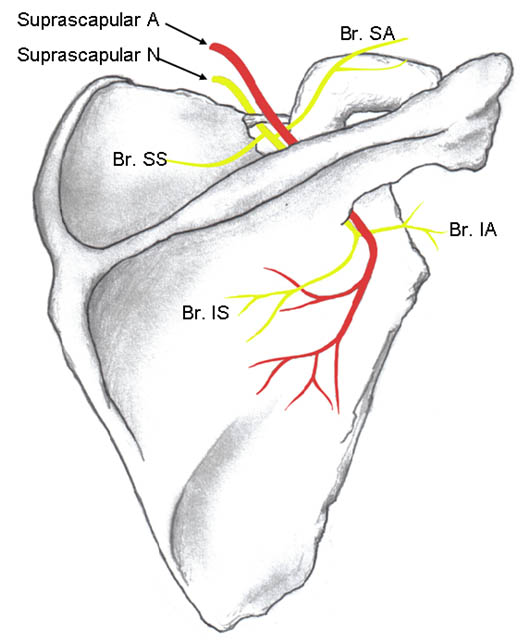 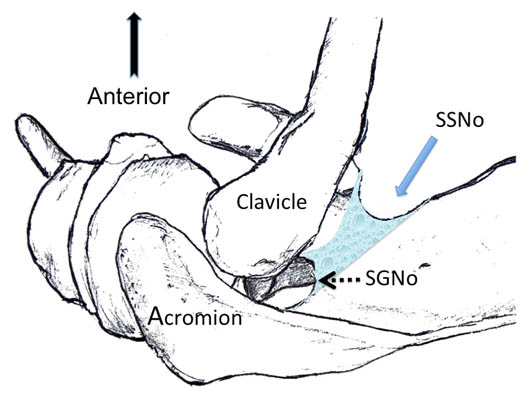 The targets for most of the techniques are either at the suprascapular notch or on the floor of the scapular spine.[2] With the notch as the target, there are potentials for SSN block failure and/or adverse effects especially if image guidance is not used. The risk of pneumothorax is approximately 1% and this complication usually arises from the needle being inserted too deep.[9-10] If the needle is placed blindly into the notch, the needle tip is unlikely to approximate the notch as demonstrated by a study using CT to confirm the position of the needle.[11-12] With the use of fluoroscopy, the position of the needle in the notch can be assured. However, there is a potential of spilling of local anesthetic to the brachial plexus.[13]

A superior approach has been described in which the needle is inserted vertically into the suprascapular fossa. Large volumes of solution (10 mL or more) will accomplish this, but according to a recent study in cadavers, there will be spread to the axillary fossa in a minority of these cases.[13]

The ideal site to perform the SSN injection is at the floor of the scapular spine between the suprascapular notch and spinoglenoid notch (Figure 2).[14] First, this technique is independent of the notch as a target. Thus, it avoids the risk of pneumothorax if one considers the direction of the needle. This technique is also feasible in individuals without a suprascapular notch (8% of the population). Second, the suprascapular fossa forms a compartment to retain the injected local anesthetic around the nerve even with a small volume.[13] In contrast, depositing local anesthetic at the notch level will result in the spread of local anesthetic to the brachial plexus.[13] Third, while imaging the suprascapular notch is possible, advancing the needle perfectly in plane in this orientation is very challenging (Figure 3 A, B). A slight deviation in the anterior direction will direct the needle towards the thorax. 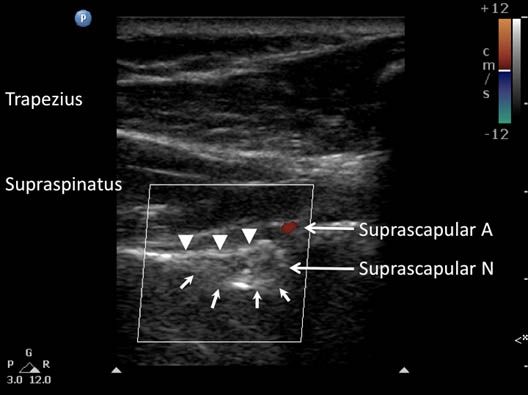 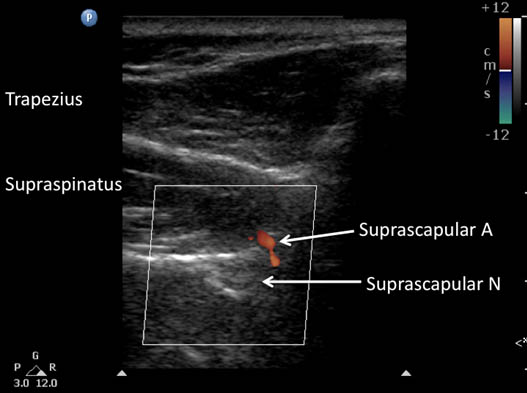 Figure 3B. Ultrasonographic image of the suprascapular nerve slightly posterior to the plane obtained in 3A. The suprascapular artery is seen running towards the floor of the scapular spine. Note that a slight anterior needle deviation can potentially slide the needle towards the thorax. Reproduced with permission from USRA (www.usra.ca). 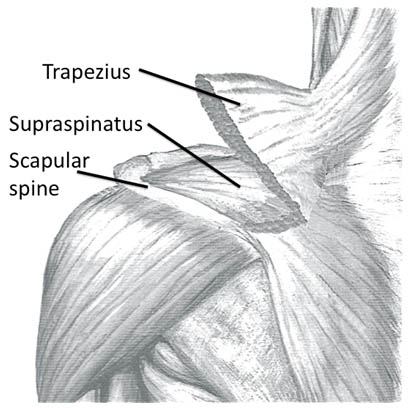 The patient can be sitting or prone. The scapula spine, coracoid process and acromion are used as palpable landmarks. Ultrasound scanning is performed with a linear ultrasound transducer (7-13 MHz) placed in a coronal plane over the suprascapular fossa with a slight anterior tilt. The transducer is oriented such that it is perpendicular to the line joining the coracoid process and the acromion (reflecting the position of the spinoglenoiod notch). The supraspinatus and trapezius muscles and the bony fossa underneath them should come into view (Figure 5). By adjusting the angle of the ultrasound transducer in a cephalo-caudad direction, the suprascapular nerve and artery should be brought into view in the trough of the floor. The nerve can sometimes be difficult to visualize as it has an approximate diameter of 25 mm.[19]

A 22-gauge, 80-mm needle is inserted either in-plane or out of plane, although the authors prefer to place the needle with an in-plane technique from the medial aspect of the transducer as the presence of the acromion process on the lateral side makes it difficult to angulate the needle. Because of the proximity of the nerve, an injectate volume of 5-8 mL is usually sufficient. 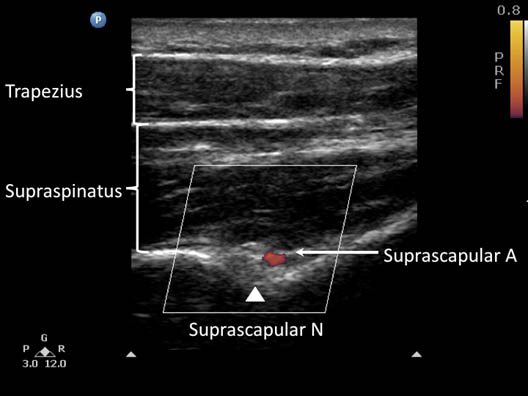 The sonoanatomy of the SSN relevant to nerve block injection and the injection techniques have been described recently.[16-18] Of interest, two of these articles[16-17] described the technique directing the needle to the scapular notch. However, description of the ultrasound transducer position and the sonograms strongly suggested that the SSN images were captured on the floor of the scapular spine. The third article demonstrated SSN sonoanatomy with the transducer positioned in the coronal plane with a slight anterior tilt.

This is considered an intermediate (level 2) block because the target structure lies relatively deep. Also, direct visualization of the nerve may be impaired because of bony artifacts since the nerve lies directly on bone.

The SSN is a thick nerve, arising from the upper margin of the superior trunk of the brachial plexus. Between the scapular foramen (notch) and the spinoglenoid notch, the nerve is in direct contact with bone. The course within the supraspinatus fossa is considerably oblique and this has an important impact on scanning and correct transducer positioning. For example, the transducer needs to be positioned oblique in order for the ultrasound beam to be perpendicular to the course of the nerve.

Both the scapular notch (if present) and the spinoglenoid notch can easily be identified sonographically. It is important to point out that the notches are not the site of SSN blockade. The optimal site of SSN blockade is at the bottom of the supraspinatus fossa half way between the scapular notch and the spinoglenoid notch, i.e., at the superior part of the neck of the scapula. The SSN is mostly oval in shape but is variable in sonographic appearances, ranging from hyperechoic to hypoechoic.

The common mistakes for performing a SSN block are: 1) inappropriate transducer positioning (e.g. parallel to spine of scapula or in line with the supraspinatus muscle); 2) use of a transducer with appropriately high frequency when the subject is obese; 3) error in identifying the superior transverse suprascapular ligament; and 4) error in identifying the scapular notch and the spinoglenoid notch.

An alternative approach is to block the SSN at the origin where it branches off the superior trunk of the brachial plexus in the posterior triangle of neck. There are no external landmarks for this alternative approach. A sitting or supine patient position and a linear high frequency transducer (as high as possible) are recommended. One key easily identified internal landmark is the omohyoid muscle as the nerve passes underneath this muscle and then they run together towards the suprascapular notch. The SSN is typically hypoechoic and round or oval in shape.