Although the actual pathophysiology of trigeminal neuralgia remains undetermined, most patients are found to have compression of the trigeminal nerve root by tortuous or aberrant vessels noted in posterior fossa exploration surgery and magnetic resonance imaging.

Trigeminal neuralgia is a unilateral disorder characterized by brief electric shock-like pains, abrupt in onset and termination, limited to the distribution of one or more divisions of the trigeminal nerve. Pain is commonly evoked by trivial stimuli including washing, shaving, smoking, talking and/or brushing the teeth (trigger factors) and frequently occurs spontaneously.

Small areas in the nasolabial fold and/or chin may be particularly susceptible to the precipitation of pain (trigger areas). The pains usually remit for variable periods.[2]

Classical trigeminal neuralgia usually starts in the second or third divisions (V2-V3), affecting the cheek or the chin. In <5% of patients the first division (V1) is affected. (Table 1)

The pain is strictly unilateral, right side more than the left with a ratio of 3:2. It rarely occurs bilaterally, in which case a central cause such as multiple sclerosis must be considered especially in young patients. Between paroxysms the patient is usually pain free but a dull continuos pain may persist in some long-standing cases. Following a painful paroxysm there is usually a refractory period during which pain cannot be triggered. The pain often evokes spasm of the muscle of the face on the affected side (tic douloureux).

The list of differential diagnosis is extensive including all unilateral headache and facial neuropathic pain disorders. Two common facial pain syndromes need to be excluded. First is multiple sclerosis should be always considered, especially in bilateral cases and young patients. Second is post herpetic trigeminal neuralgia which is a major cause of secondary trigeminal neuralgia. Contrary to idiopathic trigeminal neuralgia, it usually affects V1 more than V2 or V3. Usually there is a history of herpes zoster infection and/or rash.

The second medication of choice is Baclofen. Other medications which can be tried, although there is no clinical evidence for their efficacy, are other anticonvulsants e.g. gabapentin, pregabalin.[1][3]

The vessels in contact with the trigeminal root entry zone are coagulated or separated from the nerve using an inert sponge.[4]

This stereotactic radiation therapy procedure is non-invasive and allows high dose irradiation of a small section of the trigeminal nerve. This leads to non-selective damage of the Gasserian ganglion.[5]

The Gasserian ganglion is compressed by a small balloon, which is percutaneously introduced through a needle into the Meckelís cavity. This leads to ischemic damage of the ganglion cells. The technique may be more suitable for treatment of V1 trigeminal neuralgia of the first branch as the corneal reflex tends to remain intact.[6][7]

Under fluoroscopy, with the patient in the sitting position and the head flexed, the needle is introduced into the trigeminal cistern, visualized by X-ray. Contrast agent is then injected to determine the size of the cistern before an equal volume of glycerol is injected after aspiration of the contrast agent.[8]

This is usually considered for elderly patients who have a high risk for surgical MVD. The outcome may be less favorable than MVD, but it is less invasive with lower morbidity and mortality rates.[9] 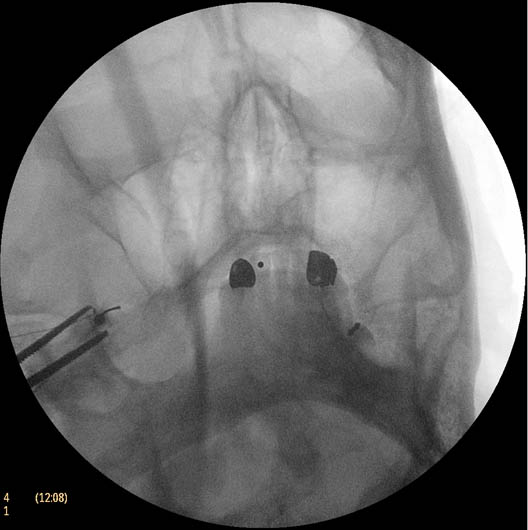 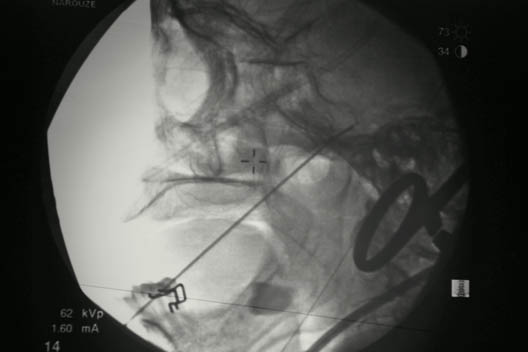 This procedure is usually performed under monitored anesthesia care (MAC) with propofol or dexmedetomidine. The patient is in the supine position with the head inside the C-arm. After rotating the C-arm to obtain a submental view, the C-arm is slightly tilted to the affected side (oblique submental view), till the foramen ovale is best visualized (Figure 2). It usually projects medially to the mandibular process.

The point of the needle is about 2 cm lateral to the corner of the mouth on the ipsilateral side. A 100 mm 22 G radiofrequency needle with a 2 mm active tip is then advanced towards the foramen ovale under real time fluoroscopy first in the AP submental view and then in the lateral view.

It is important to place a finger in the mouth to prevent or detect oral mucosa penetration. Once the needle is inside the foramen ovale, testing stimulation is started. When motor stimulation (masseter muscle, V3) is encountered, the needle needs to be slightly advanced into the foramen carefully about 2 mm to stimulate V2. In the lateral view, the needle tip should be deep into the foramen, overlying the petrous bone(Figure 3).

The patient is then allowed to wake up and sensory stimulation can be carried out with 50 Hz. Paresthesia should be felt between 0.05 V and 0.1 V in the painful areas. V3 stimulation is encountered superficial and lateral in the foramen, then V2, and V1 is the deepest towards the pons and more medially. After appropriate paresthesia, a 60o C thermo lesion is carried out for 60 seconds. The corneal reflex is tested as well as the treated dermatome for hypoesthesia. If intact, a second lesion is made at 65o C for 60 seconds and if there is still no hypoesthesia then a third lesion can be made at 70o C for another 60 seconds.

Although it would seem a safer alternative than the commonly used thermal RFA, its efficacy is questioned in a randomized controlled study.[10]

Gasserian ganglion electric stimulation was reported either via a subtemporal craniotomy,[11] or a percutaneous approach.[12] Technical difficulties and lead migration are the main factors that this approach thus it is not widely used.

There are few systematic reviews comparing various treatment approaches.[9][13-14] The first treatment of choice should always be conservative management. For those who failed pharmacological therapy, interventional management can be considered (Figure 1).[15] In general, younger patients with MRI evidence of vascular compression should be candidates for surgical MVD. The other minimally invasive procedures are generally considered to be less effective with higher relapse rate. 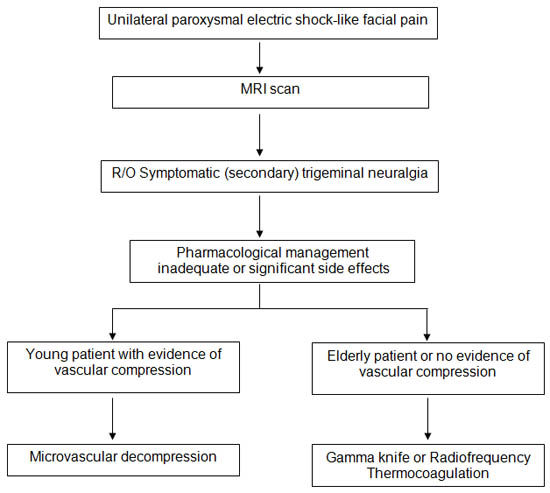 Figure 1. Algorithm for the management of trigeminal neuralgia

Several potential complications of Gasserian Ganglion block and neurolysis deserve mention. The gasserian (trigeminal) ganglion lies within the Meckelís cave, which is formed by a dura mater fold that surrounds the posterior two-thirds of the ganglion. The Meckelís cave contains CSF, so local anesthetic deposited in this area may spread to other cranial nerves and can potentially cause brain stem anesthesia.[16] Meticulous attention should be paid to avoid intravascular injection.[17] Negative aspiration is unreliable and injection of the contrast agent should be performed under real time fluoroscopy with digital subtraction, if available, prior to injection of the local anesthetic.

In a systematic review of ablative neurosurgical techniques for the treatment of trigeminal neuralgia, Lopez et al.9 concluded that although radiofrequency thermocoagulation (RFT) seems to provide the highest rates of sustained complete pain relief, it is the technique associated with the greatest number of complications. In the analyzed series, 29.2% of the patients developed some complications, mostly transient, with RFT. The rate of complications from glycerol rhizolysis (GR) was 24.8%. Stereotactic radiosurgery (SRS) was the safest technique; only 12.1% of the patient experienced complications, mostly dysesthesias (Table 3).

Postoperative trigeminal sensory loss affects virtually all patients treated with RFT and it is considered a side effect rather than a complication. However in a prospective study, 30% of these patients may suffer from permanent sensory loss.[18]

Trigeminal neuralgia is the most common form of facial neuropathic pain in the elderly. MRI is essential to identify any neurovascular compression (idiopathic trigeminal neuralgia) and to rule out other pathology e.g. multiple sclerosis, posterior fossa tumors (secondary trigeminal neuralgia). Interventional management is usually warranted after failure of conservative treatment.