The sacrum consists of five embryologically fused vertebrae. The thecal sac continues to variable levels of the sacral vertebrae, but on average it terminates at the level of the S2 vertebral body.[1] The epidural space extends beyond the terminus of the thecal sac, and can be accessed through the sacral hiatus. The sacral hiatus is a deficiency in the fusion of the posterior elements of the lower 2 sacral vertebra. This triangular shaped defect with its apex inferiorly is covered by the sacrococcygeal membrane, subcutaneous fat and skin.[3] The lateral margins of the hiatus contain the two sacral cornua which are remnants of the inferior articular processes. They are often palpated, except in morbidly obese patients, as two bony protuberances near the gluteal cleft. The floor of the sacral hiatus is formed by the posterior aspect of the S5 vertebral body. Although the epidural fat and venous plexus ends with the epidural space at the level of the 4th sacral vertebra, the venous plexus may extend beyond this level especially in the elderly.[4]

Anatomic variations of the sacral hiatus in 4–12.5% of patients may be an important factor in the success or failure of caudal epidural insertion.[3] Up to 7.7% of patients will have a complete absence of a hiatus, and up to 54% may lack the sacral cornua which help guide the blind approach to injection.[5] These reasons validate the need for some form of image guidance in the safe performance of caudal epidural injections.

The blind approach to caudal epidural insertion relies on palpation of the two sacral cornua and the interposed hiatal depression.[7] The patient may be in the prone or lateral decubitus position. The epidural needle is directed into the hiatus at a 45° angle to the skin with the bevel facing downward. When the sacrococcygeal membrane has been pierced, often with a noticeable “pop,” or if bone is encountered, needle advancement is paused and the bevel is flattened and reoriented upwards. The needle is oriented in the same plane as the sacral canal. The needle is then advanced approximately 2 cm in adults and 1 cm in children.

Prior to injection, the needle is aspirated for blood and CSF to help rule out intravascular and intrathecal injection, respectively. The reported incidence of intravascular injection ranges from 2.5% to 9%, and most often without any obvious blood in the flashback or on aspiration.[8] When bony landmarks are not readily palpable, successful needle placement may be only possible in about 66.7% on the first attempt. The overall failure rate of the blind technique in experienced hands is approximately 25%.[7]

The use of fluoroscopy improves the success rate of caudal epidural catheter insertion.[7-8] The sacrum is visualized in a lateral view and the needle is advanced through the sacral hiatus with frequent fluoroscopic confirmation. Once the appropriate depth is reached, contrast is injected to confirm needle placement. When the intended target location is more cephalad a radio-opaque catheter may be advanced under fluoroscopic guidance in an AP view to the desired level. Both lateral and AP views are obtained to confirm the correct location. Typically, the contrast spread resembles a Christmas tree pattern. An intravascular injection will result in rapid flow away from the needle tip. This may also be ideally detected with digital subtraction angiography. After a satisfactory contrast spread under fluoroscopy the steroid solution is injected.

With the patient in the prone position, a scout scan is performed using a linear array transducer with the frequency adjusted for the depth. The choice of the frequency and transducer is determined by the body habitus. In the transverse view, two hyperechoic reversed U-shaped structures represent the two bony prominences of the sacral cornu (Figure 1).  Straddling the cornu is a hyperechoic band, the sacrococcygeal ligament (SCL), and beneath that is another hyperechoic structure, the posterior surface of the underlying sacral vertebral body. In a longitudinal view, the sacrum may be identified as a linear curved hyperechoic line terminating distally at the Sacrococcygeal ligament. The sacral epidural space itself is an anechoic region, due to the acoustic shadow, slightly cephalad. By convention, the left side of the screen is oriented cephalad  (Figure 2). 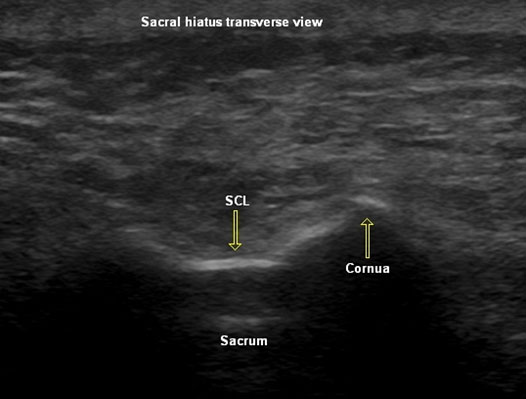 Figure 1. Sonographic view at the sacral hiatus with the linear array transducer in a transverse view showing the cornu and the sacrum. SCL = sacrococcygeal ligament.

Following identification, and after a sterile prep, a linear transducer in a sterile sleeve with water soluble gel is placed in transverse and then sagittal planes along the midline of the sacral hiatus to identify the structures again. 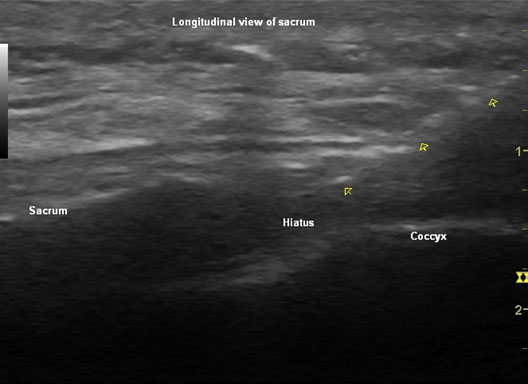 Figure 2. Longitudinal sonographic view of the sacrum showing the body of the sacrum, hiatus and coccyx. The arrowheads point to the 25 G spinal needle.

After a sterile prep using chlorhexidine, the transducer with a sterile sleeve and using sterile gel, a longitudinal image of the sacral hiatus is obtained. Following cleaning all gel at the entry point, 1% lidocaine is injected through a 25 G hypodermic needle to anesthetize the entry zone.  A 22 G, 2-inch epidural needle is then advanced in plane real time. A ‘pop’ may be felt as the sacrococcygeal ligament is penetrated.  The needle can be visualized when introduced in plane as a hyperechoic line until it pierces the sacrococcygeal ligament. After negative aspiration for CSF and blood, injection is performed under real-time sonography where one may notice turbulence when there is a plethora of colors seen with the color Doppler in the sacral canal.[4]  Prior to steroid injection, it is the author’s practice to also use contrast confirmation with fluoroscopy to ensure epidural spread and avoid intravascular injection for added safety.[6]  If a catheter is used fluoroscopic confirmation is utilized as described earlier.

Sonographic guidance for neuraxial injections for analgesia and anesthesia is widely used especially in pediatric patients where the sonoanatomy is much easier to visualize when there is less ossification in this age group. The introduction of sonography in pain medicine started over a decade ago, and its utility is growing. Initial report of caudal epidural steroid injection with sonographic guidance was a case series by Klocke et al.[9]. The authors remarked that the anatomic landmarks and the sacrococcygeal ligament were readily visualized.

Ultrasound as a screening tool for caudal epidural steroid injection was demonstrated by Chen et al. [1,2]..Their study consisted of 47 patients (20 women, 27 men) with low back pain with sciatica who were to received caudal epidural steroid injections. The mean diameter of the sacral canal was measured to be 5.3+/-2.0 mm. The mean distance between bilateral cornua was measured to be 9.7+/-1.9 mm. They concluded that sonographic images indicating a closed sacral canal and sacral diameters ranging from 1.2 to 1.6mm may suggest a higher failure rate in caudal epidural injection.

Chen et al subsequently reported on ultrasound-guided caudal epidural placement in seventy patients with low back pain and sciatica.[10]The authors evaluated the accuracy of the sonographically guided approach against the “gold standard” fluoroscopy and documented a 100% success rate.  They identified the sacral hiatus using a 5-12 MHz frequency linear array transducer in the transverse direction and subsequently scanned longitudinally. A 22 G Tuohy needle was then advanced in real time with a longitudinal view of the sacral canal.  They remarked on the limitation of the ultrasound-guided approach to trace the hyperechoic epidural needle once inside the sacral canal.

The inability to visualize vascular uptake of injectate using ultrasound led Yoon et al to conduct a feasibility study to investigate the utility of color Doppler in mitigating the risks of vascular injection in an ultrasound-guided approach.[4] The epidural space was accessed and 5 mL of local anesthetic was injected under real time sonographic guidance. Detection of unidirectional flow (observed as one dominant color) of the solution was taken as a positive confirmation for injectate into the epidural space. Flows observed in other directions (seen as multiple colors) were taken as evidence for intravascular injection. Fifty-two of 53 subjects who had this positive Doppler spectrum change underwent fluoroscopic confirmation which showed correct placement in only 50 subjects (96.1%). This promising observation also suggests that the possibility for intravascular injection still exists.

The use of sonography in pain medicine for neuraxial steroid injection, especially with particulate steroid is not entirely safe.  Ultrasound guided technique cannot reliably detect accidental intravascular injection thus cannot prevent intravascular occlusion following accidental intravenous injection of particulate steroid.[6]  Until this limitation is adequately overcome, neuraxial steroid injections should not be performed real time under ultrasound alone and continue to be relied on conventional fluoroscopy and digital subtraction angiography. At the present time, ultrasound guided caudal approach seems to be marginally safer for real time steroid injection than the blind landmark approach.