How I Do It: TAP Block

The transversus abdominis plane (TAP) block is an abdominal wall block that provides somatic coverage potentially from T6 to L1 but most typically from T10-L1.[1] Refinement in ultrasound technology and increased recognition of postoperative pain management have made this a “must-know” technique.[2-3] 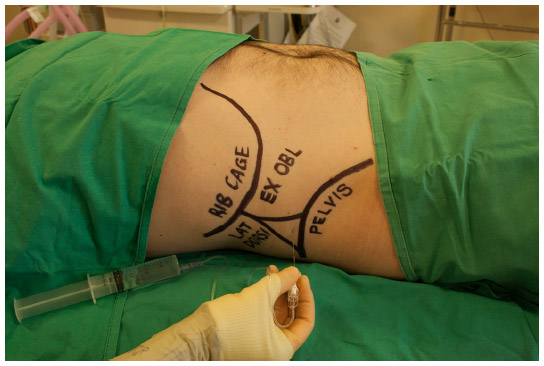 Figure 1. Surface anatomy labelled for landmark insertion of TAP block in an adult male in the supine position

Although field blocks for abdominal surgery have been used for decades, it was only with the “double pop” technique via the lumbar triangle of Petit described by Rafi that interest really took off.[4] Soon after, with the advent of readily available and portable (point of care [POC]) ultrasound machines, ultrasound-guided TAP block quickly gained popularity. Since then, numerous variations of this have been employed, including the subcostal TAP, rectus sheath, and quadratus lumborum (QL) blocks (see Figure 1).

Due to the indistinct innervation and lack of visible large neural bundles, this is an interfascial block, dependent on volume and spread of local anesthetic to be successful.

This bloks is often used as part of a multimodal analgesia regimen for various abdominal surgical cases. With the classic approach, most studies show coverage from T10-L1.[7]

Higher levels of coverage for upper abdominal surgery can be obtained with subcostal TAP and rectus sheath blocks.

TAP blocks and variations are typically done under general anesthesia, either prior to incision or immediately after completion of procedure.

With the patient in a supine neutral position and appropriate identification of the borders and appropriate prep/drape, a short bevel regional block needle is inserted perpendicularly to the skin. After piercing the skin, two pops are felt. The first is through the fascial extension of the external oblique, the second is through the fascial extension of the internal oblique. After negative aspiration, local anesthetic is injected.

The triangle of Petit can be difficult to palpate, particularly in obese patients.

With the advent of ultrasound, TAP blocks can be done quickly and reliably. As with the landmark technique, the patient is positioned in the supine position.

The ultrasound probe is placed in a transverse orientation along the anterior axillary line between the subcostal margin and the iliac crest. This will allow visualization of the three abdominal wall muscles (external oblique, internal oblique, and transversus abdominis) along with deeper structures including peritoneum and viscera. 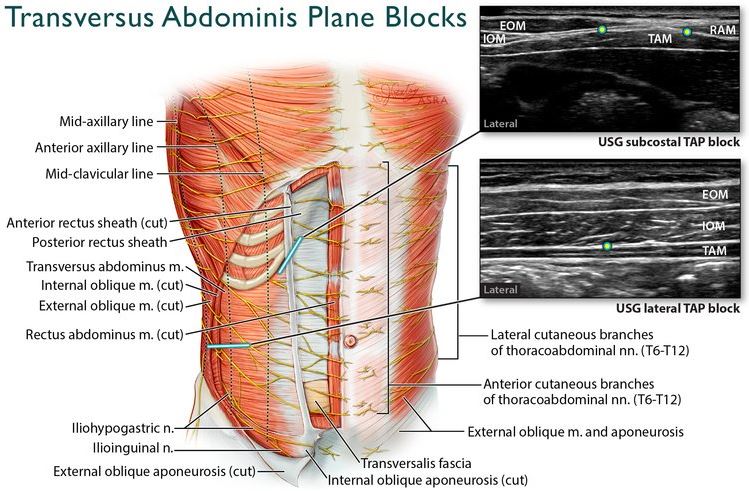 After appropriate prep/drape, the needle is inserted in plane and advanced anterior to posterior under continual visualization until the tip is between internal oblique and transversus abdominis. After negative aspiration, local anesthetic is injected. Separation of the internal oblique and transversus abdominis should be visible with a distinct pocket of local anesthetic in between. (See Figure 2.) 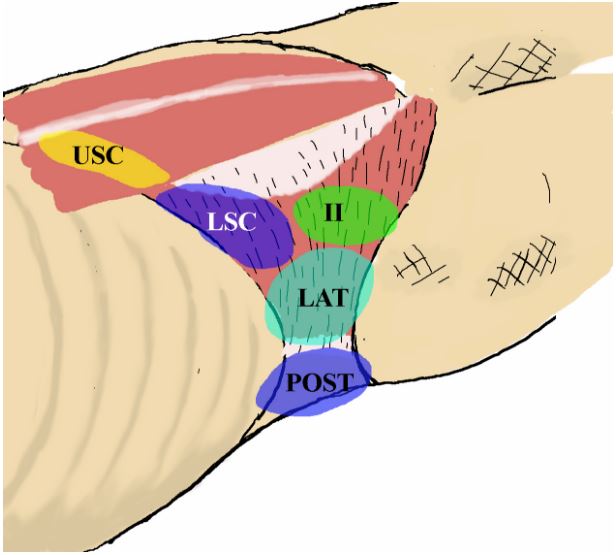 Originally described by Hebbard in 2008[12], the oblique subcostal TAP block provides analgesia for upper abdominal surgery including cholecystectomy and supra-umbilical hernia repair. A sonogenic needle is introduced near the xiphoid from medial to lateral orientation with local anesthetic deposited between the transversus abdominis and rectus abdominis muscles. The original article describes advancing the needle inferolaterally to provide optimal coverage of multiple intercostal segments.

Rectus sheath blocks were first described in 1899[13] as a way to provide muscle relaxation and analgesia to the terminal branches innervating the rectus abdominis muscle. While this first description was blind and landmark based, routinely available ultrasound technology has allowed for a reliable and safe way to provide analgesia for somatic pain over the anterior abdominal midline. The block is typically done in a short axis in-plane approach to allow for visualization of the rectus muscle belly and underlying fascial layer with deposition of local anesthetic just deep to the rectus muscle but superficial to the posterior aspect of the rectus sheath.

Please see  “How I Do It: Ultrasound-Guided Bilateral Rectus Sheath Blocks" from ASRA News, November 2014, pp. 5-8,22, for further detailed explanation.

Quadratus lumborum blocks were first described at the European Society of Regional Anesthesia (ESRA) in 2007. Since then, there has been an explosion of new techniques, approaches, and data for the use of the various QL blocks for visceral and somatic pain.