How I Do It: Ultrasound-Guided Bilateral Rectus Sheath Blocks

Schleich first described the use of bilateral rectus sheath blocks (BRSBs) in 1899, with the aim of providing muscle relaxation and analgesia of the abdominial wall by blocking the terminal branches of the thoracolumbar nerves within the substance of the rectus abdominis muscle (RAM).[1]  It was originally performed as a blind, loss-of-resistance technique.  BRSBs had previously remained underutilized, largely due to concerns over the accuracy of needle-tip placement,[2] particularly in relation to vascular structures contained within the rectus sheath as well as visceral structures contained within the underlying peritoneal cavity.[3]  BRSBs are ideally suited for ultrasound guidance because the RAM, layers of the rectus sheath, and important vascular structures are easily identified with ultrasound technology.

Ultrasound-guided BRSBs provide somatic analgesia over the midline anterior abdominal wall from the xyphoid process superiorly to the symphysis pubis inferiorly.  It is therefore indicated for vertical midline (or paramedian) surgical incisions.  Historically, BSRBs were primarily used as an analgesic adjunct for umbilical hernia repair or laparoscopic gynecologic procedures;[4-6] however, with the ever-increasing adoption of ultrasound imaging and experience with ultrasound-guided peripheral nerve blockade, more recent indications include analgesia for vertical midline laparotomy incisions for either lower or upper abdominal surgery.[7-11]  The duration of BRSBs may be extended by placement of catheters within the rectus sheath to allow either continuous and/or intermittent bolus administration of local anesthetics.[10,11]  Thus, ultrasound-guided BRSBs hold considerable potential as an integral part of a perioperative multimodal analgesic regimen.

Anatomical Course of the Thoracolumbar Nerves

The sensorimotor innervation of the anterior abdominal wall is supplied by the ventral rami of the thoracolumbar spinal (T7-L1) segmental nerves.  The thoracolumbar nerves course along the anterolateral wall within the transversus abdominis plane (TAP), and continue anteromedial within the TAP,  eventually encroaching upon the lateral aspect of the rectus sheath.[12]  The nerves then enter the lateral aspect of RAM and contribute to the formation of a nerve plexus that runs cranio-caudally within the muscle in close relation to the lateral branch of the deep epigastric artery.[13]  The thoracolumbar nerves typically pierce the posterior border (89%) and less commonly the lateral border (11%) of the RAM, with the nerves piercing the posterior border within 1.6 to 2.6 cm from the lateral edge of the RAM.  The nerves provide both muscular and cutaneous branches to innervate the muscle fibers and overlying skin.  Notably, the branches of the thoracolumbar nerves do not cross midline.

Anatomy of the Rectus Sheath 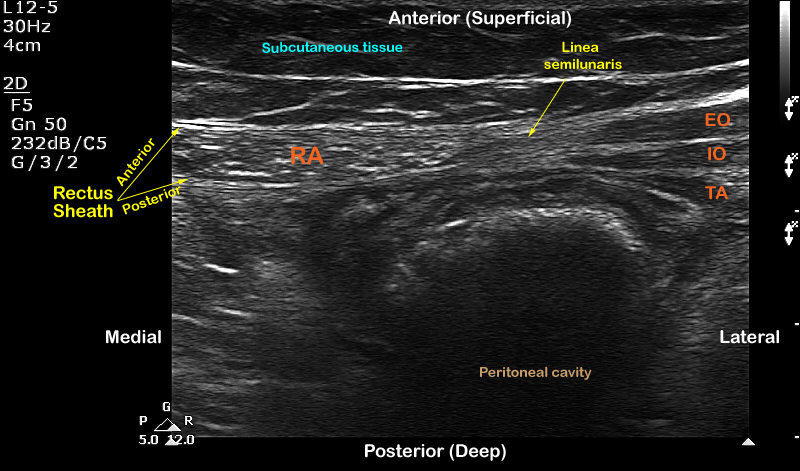 Figure 2a.  Illustration demonstrating the cross-sectional anatomy of the rectus sheath above the arcuate line:  RA=rectus abdominis muscle.

Figure 2b.  Illustration demonstrating the cross-sectional anatomy of the rectus sheath below the arcuate line:  RA=rectus abdominis muscle. 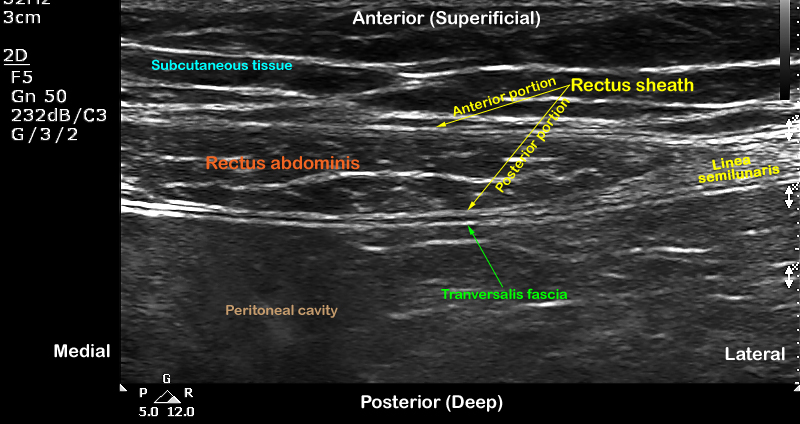 Figure 3.  Sonoanatomy of the lateral rectus abdominis muscle and rectus sheath in short-axis above the arcuate line also demonstrating the transversalis fascia.

The transducer (high frequency linear array or low frequency curved array, depending on body habitus) is positioned just lateral to the umbilicus in an axial (transverse) plane (Figure 4).  Identify the layers of the anterior abdominal wall from superficial to deep (Figures 2a, 2b, and 3): 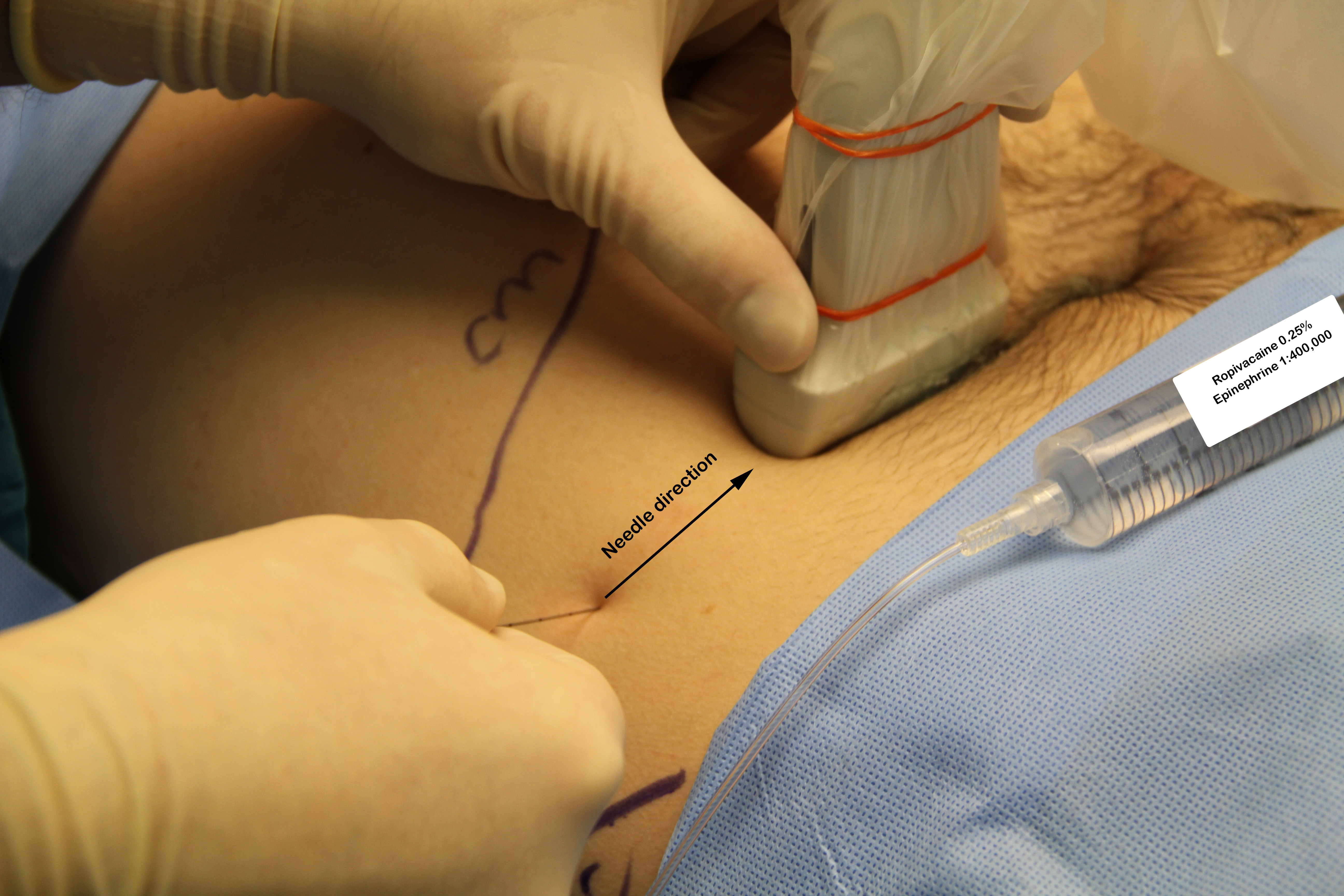 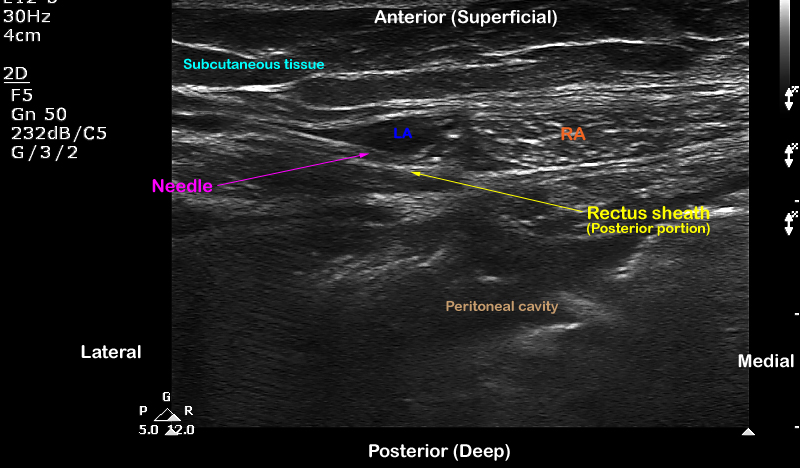 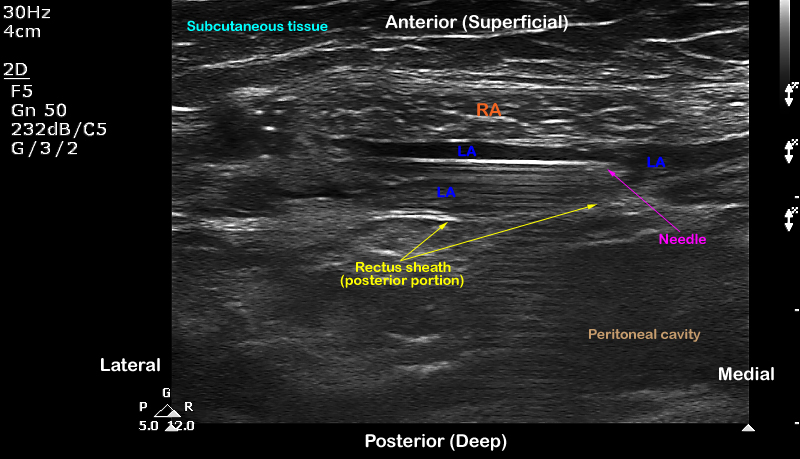 The target site for local anesthetic deposition is deep to the RAM, but superficial to the posterior aspect of the rectus sheath.  The terminal thoracolumbar nerves are too small to be visualized as discrete structures; thus, BRSBs are a “compartment block.”  Transducer position and initial needle insertion site (lateral to the transducer) should be adjusted in a cephalad-to-caudad manner based on the anticipated location of the vertical midline incision.  Placing the transducer in the middle of the anticipated vertical extent of the midline incision should optimize distribution of local anesthetic spread.

Although the anterior and posterior rectus sheaths are relatively easy to identify as hyperechoic linear structures that encase the RAM, novices may initially find the technique somewhat more difficult due to the “dynamic nature” of the block.  The anterior abdominal wall may move with respiratory excursions and even small movements may displace the needle out of the imaging plane.  Since this is a compartment block (similar to a TAP block), it is reasonable (and preferred by the author) to perform the block in the operating room after induction of general anesthesia but prior to surgical incision or emergence.