PECS Versus PVBS for Perioperative Analgesic Management in Breast Surgery

The main therapies for breast cancer treatment include local and systemic therapies. Systemic medical therapy can include chemotherapy, hormone therapy, and protein receptor targeted therapy. Local therapy includes surgery and radiation therapy. The majority of women diagnosed with breast cancer will have some type of surgery throughout the course of their disease.

With the recent changes in the health care environment, quality improvement and enhanced recovery pathways are becoming more important. The main objectives of these pathways revolve around improving outcomes while minimizing risk for patients. According to the National Surgery Quality Improvement Program (NSQIP) data, the complication rate after breast surgery is about 6% versus upwards of a 25% risk with colorectal surgery.[1] Although the percentage of complications may be significantly lower in breast surgery, it seems reasonable to approach these patients with anesthetic plans that offer the best opportunities to decrease complications. Since one of the common causes for prolonged hospital admission or potential patient dissatisfaction is acute postoperative pain,
an approach should greatly consider pathways for optimal recovery related to pain management.[2-3]

The options for pain management should include a multimodal regimen that involves oral and intravenous (IV) medications. This approach aims to minimize side effects while optimizing outcomes.[3-4] Regional techniques should be considered as part of the analgesic regimen as well. The interest in regional techniques—namely, paravertebral nerve blocks (PVBs) and epidurals—stems from the desire to minimize the risk of chronic pain after breast surgery[5-6] as well as taking advantage of possible impacts of this technique on the possibility of cancer recurrence.[7-8] Thoracic epidurals may be considered a valid choice, especially for bilateral procedures.

However, many patients are discharged either the day of surgery or within 1 day postoperatively, making epidurals a less than optimal option. Besides epidurals and continuous wound infiltration, other choices for regional techniques include uni- or bilateral PVBs and recently described pectoral (PEC) I-II and serratus plane blocks.[9] The innervation of the breast involves the thoracic dermatomes of T2–T6, and, when subpectoral expanders or implants are used, one must also consider the innervation to the pectorals muscles (pectoralis major and pectoralis minor).[10]

PVB for breast surgery is a well-described technique. It can be performed either with ultrasound (US) guidance or as a landmarks based technique. The PVB is essentially a nerve block of the ipsilateral spinal nerve. PVBs can be utilized as an analgesic or anesthetic technique for breast surgery. The technique can involve a single or multiple one-time injections, or continuous catheter technique.[10] It is possible that the spread of local anesthetic can encompass a few levels, both cephalad and caudad from the level of the initial injection.[11] Risks of PVB include failed block, epidural
spread, brachial plexus spread, hematoma, vascular puncture, pleural puncture, and pneumothorax. The risk of pneumothorax is quoted to be generally less than 0.5%.[12] According to ASRA’s evidence-based guidelines for anticoagulated patients, the same precautions should be taken when placing thoracic PVBs as when
placing an epidural.[13]

PVBs can be useful because, like epidurals, the innervation of the posterior, lateral, and anterior branches of the
intercostal nerve will be covered.[8] PVBs can be performed using a landmark/loss-of-resistance technique or under direct US guidance. The paravertebral space is a wedge-shaped, anatomical compartment that lies adjacent to the vertebral bodies. Paravertebral injections are performed just lateral to the vertebral column using the ipsilateral
transverse process (TP) as a boney landmark. The wedgeshaped paravertebral space anatomically consists of
an anterior border (parietal pleura), posterior border (superior costo transverse ligament), and medial border (intervertebral foramina/transverse process). The superior and inferior borders are made up of the corresponding
heads of the ribs above and below. The space itself contains fatty tissue, intercostal nerves, vessels, sympathetic chain, and dorsal rami communicantes. The paravertebral space also may be divided anteriorly and posteriorly by the endothoracic fascia. The relationship between the spinal nerves and the endothroacic fascia has been evaluated and remains unknown. However, exact placement of local anesthetic in relation to the endothoracic fascia may determine the quality of spread in the segmental regions both cephlad and caudad to the initial injection site.[14-15] 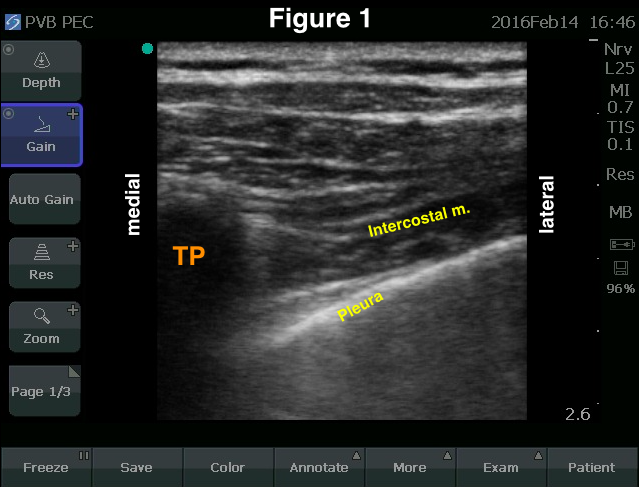 For either the landmark or US technique, patients can be positioned in the sitting or the lateral position with the operative side up. With the US technique, some practitioners may position patients in the prone position for block placement. Figures 1 and 2 provide images of the landmarks typically visualized when using US for a PVB. Both in- and out-of-plane needle advancement have been used. Commonly, one can identify the transverse process about
2.5 cm lateral to the spinous process, and the visualization of the anterior border (parietal pleura) and the medial border (transverse process) are utilized to guide the injection. The intercostal muscle is also visualized (Figure 1). When scanning in the transverse plane, the ribs can be identified superiorly and inferiorly. The ribs produce a shadow effect as the US beam is attenuated by bone, while the pleura will not have the same attenuation effect. Both the ribs and
pleura will appear as hyperechoic structures under US. The ribs will also be more superficial. 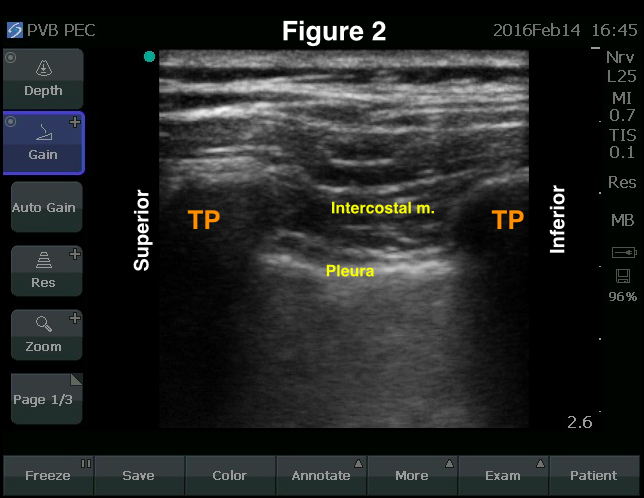 Local anesthetic is placed with a blunt-tipped needle following sterile technique. During the in-plane approach, the needle is directed from lateral to medial in the transverse scan and, usually, from superior to inferior in the sagittal scan (Figure 2). Once the posterior border is passed, there may be a sensed “pop” and loss of resistance to injection during the placement of the local anesthetic. The spread of local anesthetic will be seen spreading over the anterior border (the pleura) to confirm appropriate placement. Because this is similar to an intercostal nerve injection, consideration must be given to the potential rapid uptake of local anesthetic. Therefore, it is recommended that lower concentrations
(0.5% equivalent or less) be used rather than higher concentrations (0.75%). A nerve stimulator also can be applied to identify a paresthesia or motor response along the intercostal nerve. The use of a nerve stimulator may increase the incidence of anterior placement of local anesthetic to the endothoracic fascia; this may result in a greater incidence of multilevel spread of the local anesthetic.[15]

Recently, the PEC I, PECS II, and Serratus Plane blocks have been described as fascial plane blocks that work as potential analgesic adjuvants for both major and minor breast surgery with or without axillary lymph node dissection.[16–19] The block was originally described as an infiltration technique between the pectoralis major and minor muscles (PEC I). This placement targets the innervation to the pectoralis muscles, namely, the lateral and
medial pectoral nerves. Since then, local anesthetic placement to target the pectoral nerves as well as the thoracic dermatomal innervation, is mainly, but not limited, to T2–T6.[19] The techniques were originally described by Blanco et al. The exact location of placement of the local anesthetic is what will differentiate the PEC I, PECS II, and serratus plane block. Chest wall blocks are relatively easy to perform under direct US guidance.[16–18] Combinations of these blocks have been shown to be useful in both minor and major breast surgery, including mastectomy with temporary and
permanent implant placement. Chest wall blocks have been associated with decreased opioid consumption and increased patient satisfaction.[16,19]
When compared to PVBs, PECS blocks could eliminate the risk of posterior midline spread and subsequent hypotension, which can be seen with epidurals and PVBs.[16] The risks include anesthesia of the long thoracic nerve, nerve injury to the thoracodorsal and long thoracic nerve, vascular injury, local anesthetic toxicity, pleural puncture, and pneumothorax. The PECS II and serratus plane block involve the visualization of the pectoralis minor, serratus anterior muscles, and 4th to 5th ribs. The placement of local anesthetic is either on the superficial or deep borders of the serratus muscle respectively, near the 4th, 5th or 6th ribs.[16–19]

The PECS I-II and serratus anterior plane blocks, under US guidance, involve the visualization of the pectoralis major, the pectoralis minor, serratus anterior muscles, intercostal muscles, and the 4th and 5th ribs. These can be described as three separate techniques, although the scanning technique can allow the opportunity to perform these in combination with local anesthetic placement in the described planes. The PEC I injection allows for blockade of the lateral pectoral nerve and medial pectoral nerves (Figure 3). The lateral pectoral nerve (lateral anterior thoracic nerve) arises from the lateral cord, with components from C5, C6, and C7 nerve roots. It innervates the superior one-third of the pectoralis major muscle. The medial pectoral nerve (medial anterior thoracic nerve) arises from the medial cord, with components from C6, C7, C8, and T1 nerve roots. It innervates and pierces through the pectoralis minor muscle with subsequent innervation to the inferior two-thirds of the pectoralis major. The lateral pectoral nerve will run near and adjacent to the thoracoacromial artery. The probe placed beneath the clavicle, in a similar position to the infraclavicular block, will demonstrate the pectoralis muscles. With slight rotation of the probe and moving laterally along the anterior axillary line to the 4th and 5th ribs, the lateral edge of the pec minor, the serratus anterior muscles, and the ribs can be found under US guidance. Here, the course of the thoracodorsal and the long thoracic nerve also may be found. The thoracodorsal nerve innervates the latissimus dorsi muscle, and the long thoracic nerve innervates the serratus anterior muscles. Local anesthetic placement, either superficial or deep to the serratus muscles, will
produce the dermatomal anesthesia to the chest wall, T2–T6.[19]

The PECS blocks can be performed prior to or after surgery for analgesia. One consideration is that there may be a
significant amount of subcutaneous air postoperatively, which will make US guidance extremely difficult. Performing the blocks before surgery can result in preemptive analgesia and decrease opioid consumption.
The block is performed with the patient in the supine position and under US guidance. A similar position of the arm to the infraclavicular block (elbow flexed and shoulder abducted) seems to work best for visualization of appropriate anatomy in the PECS I block.[20] In this position, the probe can be placed inferior to the clavicle and at the “12 to 1 o’clock” orientation of the breast. The use of a linear probe and a beveled tip needle with an in-plane needle technique will allow for injection between the pectorals muscles and will accomplish the PEC I block (Figure 3). For the PEC II block, one can scan laterally and inferiorly along the breast contour in the anterior axillary line to visualize the lateral edge of the pec minor muscle, the serratus anterior muscle, and the 4th rib (Figure 4). In the PECS II block, local anesthetic will be deposited between the 4th rib and the serratus muscle. The serratus plane block is performed near the midaxillary line, and the local anesthetic placement is between the latissimus dorsi muscle and the serratus muscle along the 4th and 5th ribs.[17] As for the choice of local anesthetic, in the PECS blocks, analgesic results are easily obtained with the choice of volume over concentration (ie, a lower concentration 0.2–0.25% of a longer-acting drug and a higher volume 20–30 cc bilaterally). One can often visualize both pectoral muscles and serratus muscles along the 3rd and 4th ribs. If this is possible, one can use this single scan to place local anesthetic in all three planes with a single needle pass, starting with the deepest plane, beneath the serratus muscle, and infiltrating as the needle is withdrawn to finally deposit local anesthetic between the pectoralis muscles. 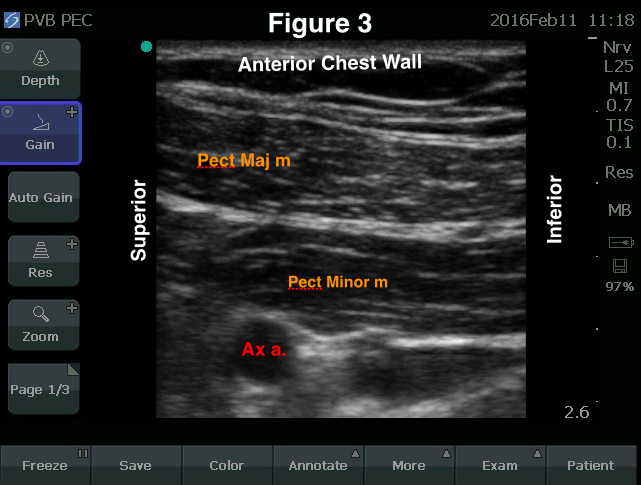 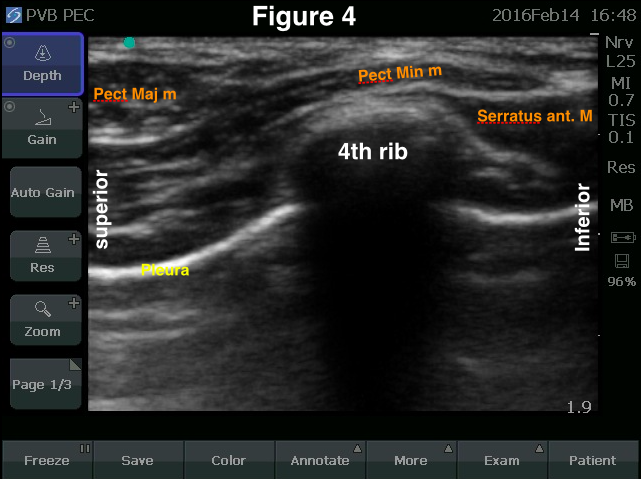 For descriptions and demonstrations of the block techniques, follow the links to these two videos.