In recent years, a substantial evidence base to support the benefits of an ultrasound- (US-) assisted approach to CNB has emerged. The use of a preprocedural US scan identifies vertebral levels more accurately than palpation of surface anatomical landmarks,[1,2] allows precise identification of the underlying anatomy, and facilitates measurement of depth to the intrathecal or epidural space.[3] Neuraxial US improves the technical performance of CNB by reducing the number of skin punctures, needle redirections, and overall needle passes, when compared to conventional landmark-based techniques.[3,4] Neuraxial US is of particular benefit in patients with altered anatomy including obesity,5,6 degenerative age-related changes, and a history of previous spinal surgery where landmark palpation can be challenging. Reduction in technical difficulty may in turn help minimize patient discomfort and dissatisfaction, inadvertent dural puncture, and other serious complications such as spinal hematoma and neural injury.

Gross anatomy of the lumbar spine

The primary objectives of neuraxial US are to (1) identify the bony landmarks of the lumbar spine by the characteristic acoustic dropout shadows that they cast, and (2) identify the soft-tissue “windows” of the interspinous and interlaminar spaces which permit sound wave and needle entry into the vertebral canal of sound waves.

The patient is placed in the sitting or lateral decubitus position with the back arched to ‘open’ the interspinous and interlaminar spaces and enlarge the acoustic window. Standard palpation of surface anatomical landmarks should be performed prior to scanning to attempt identification of the L3-4 level and midline. We recommend the use of a curved, low-frequency (2-5 MHz) probe to provide a broad field of view and enhanced beam penetration, both of which aid identification of anatomy.

For the US-assisted midline approach, the most important views in clinical practice are the parasagittal oblique (PSO) interlaminar view and the transverse interlaminar view. Both allow visualization of the neuraxial structures through acoustic windows and can therefore be used to identify and mark appropriate intervertebral spaces as described below. 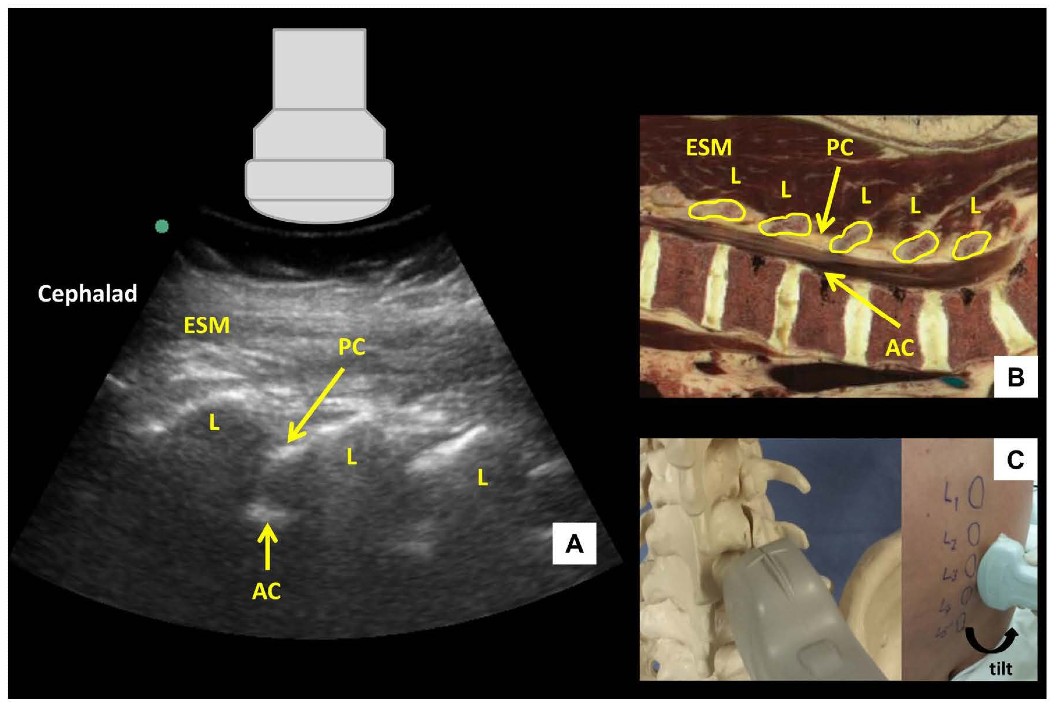 The US probe is placed in a parasagittal orientation approximately 3-4 cm lateral to the midline over the lower lumbar spine and slightly cephalad to the sacrum with a slight tilt to direct the US beam toward the midline in an oblique plane. This results in a sawtooth-like pattern characterizing the parasagittal oblique (PSO) interlaminar view (Figure 2). The “teeth” and the intervening gaps correspond to the downsloping laminae and interlaminar spaces respectively. The US beam penetrates the following structures within the interlaminar space (from superficial to deep): ligamentum flavum, epidural space, and posterior dura (collectively referred to as the posterior complex); the intrathecal space; anterior dura, posterior longitudinal ligament and posterior border of the vertebral body (collectively referred to as the anterior complex). The individual components of the anterior and posterior complexes are often not distinguishable in practice.

Once the PSO interlaminar view has been obtained, the probe is slid in a caudad direction until the elongated horizontal hyperechoic line of the sacrum is visualized. This is an important ultrasonographic landmark as the cephalad edge of the sacrum represents the S1 vertebral body and the L5-S1 interspace can therefore be identified. Starting at this point, each interspace is centered on the US screen and a corresponding skin mark is made at the midpoint of the long edge of the probe to indicate its location and identity. If the probe is initially placed too laterally, or insufficiently angled towards the midline, a hump-like pattern of shadowing, instead of the sawtooth-like pattern, will be seen. This pattern of continuous hump-like shadows is formed by the overlapping superior and inferior articular processes characterizing the parasagittal articular process view (Figure 3). 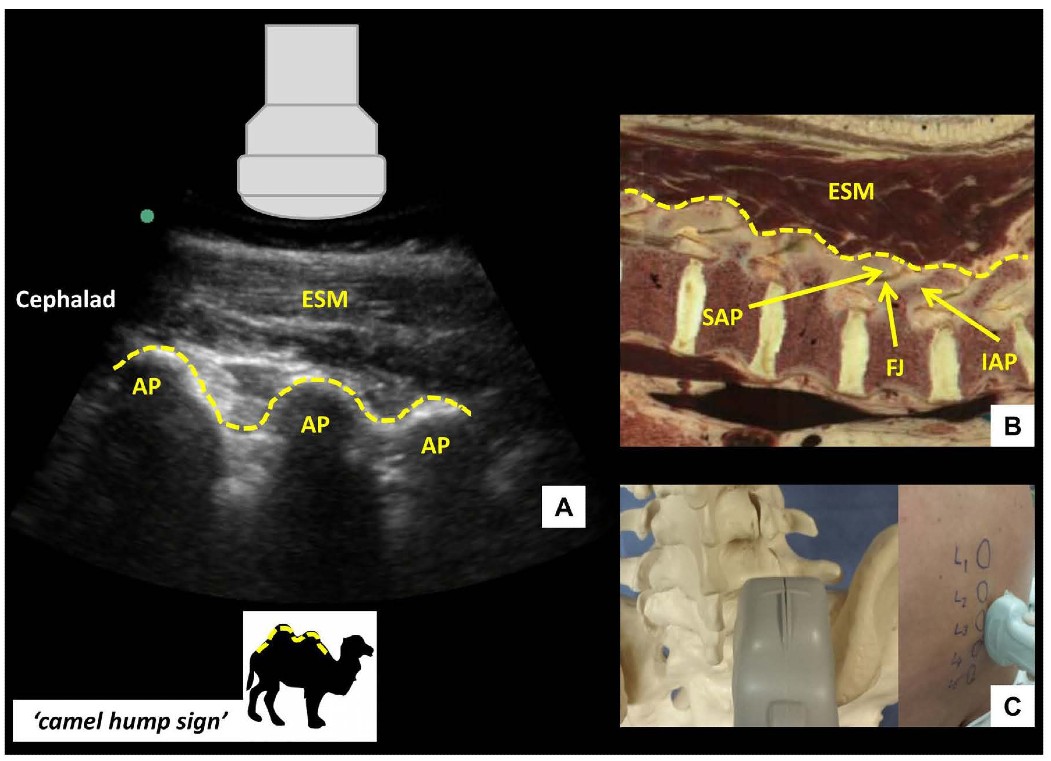 After the desired interspace has been identified and marked using the PSO interlaminar view, the probe is then turned 90 degrees to obtain the transverse interlaminar view and the midline is centered on the screen (Figure 5). The probe may need to be tilted cranially in the horizontal plane to compensate for spinous process angulation. The interspinous ligament appears as a hypoechoic midline stripe. The intrathecal space can be visualized as a hypoechoic area bounded by the anterior and posterior complexes respectively. The latter are visualized as a set of parallel hyperechoic lines. 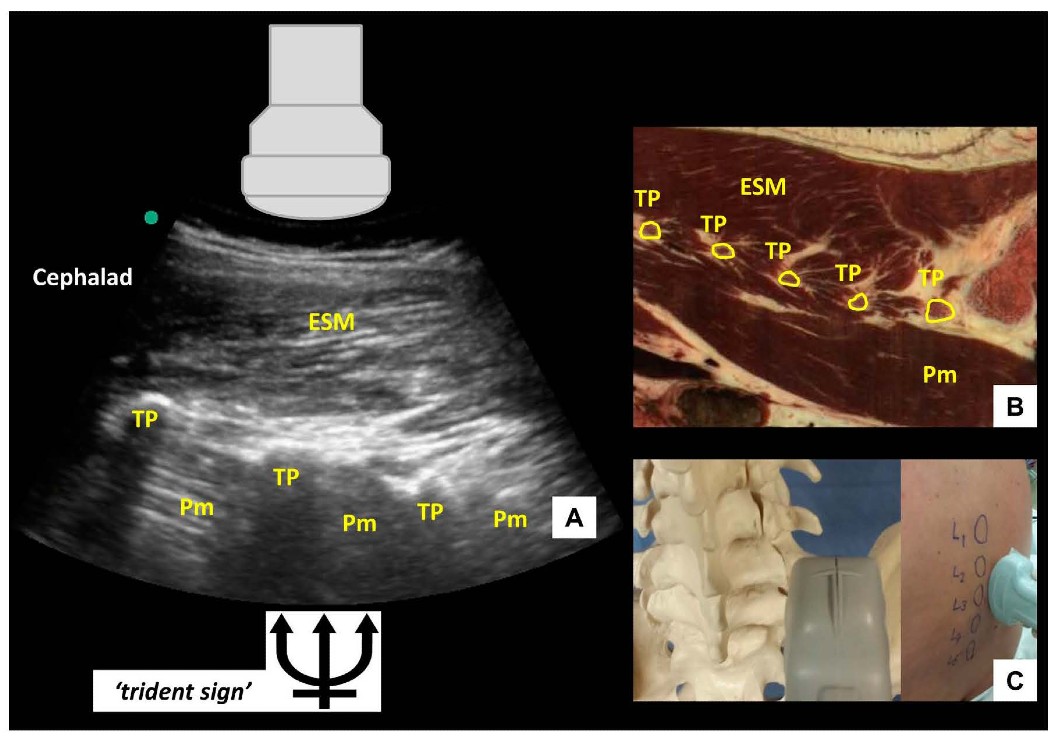 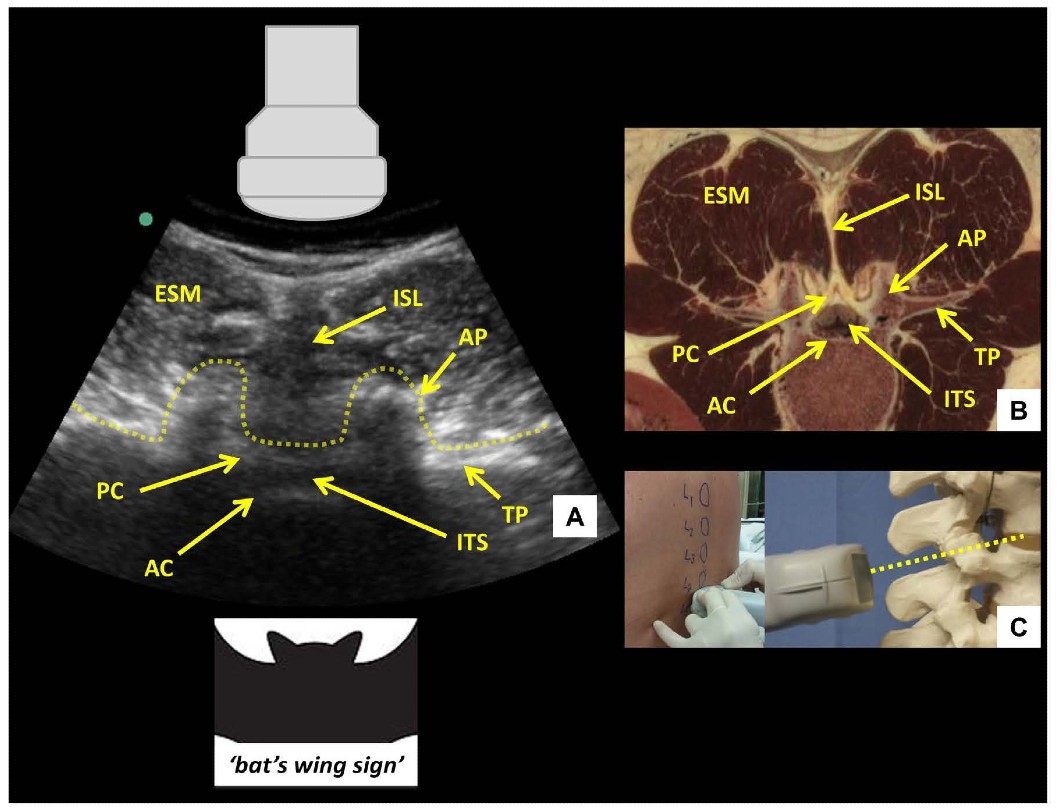 Skin marks are made at the midpoint of the short and long probe edges, and the needle insertion point for a midline approach lies at the intersection of these two marks. Needle insertion depth can be estimated by measuring the distance from skin to posterior complex. When the probe is moved too cephalad or caudad and lies directly over a spinous process, the tip of the spinous process is seen as a superficial hyperechoic “cap” over an elongated dense acoustic shadow which is referred to as the transverse spinous process view (Figure 6). In this view, the brightly hyperechoic laminae of the vertebral body are visualized at the anterior (deep) border of the erector spinae muscle, which can be seen lateral to the spinous process.

Insertion of the needle occurs at the marked site in the midline with the same cranial angulation (in the horizontal plane) as that used with the ultrasound probe. Minor redirection may occasionally be necessary, and should be made in small increments and guided by tactile feedback. Entry into the epidural and intrathecal space is signaled as usual by loss-of-resistance or cerebrospinal fluid backflow respectively. 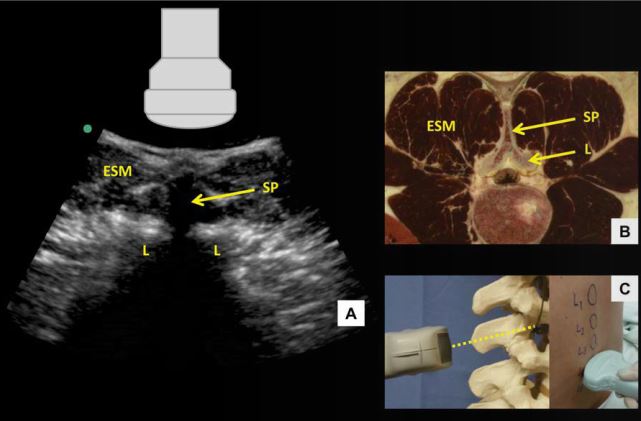 A US-assisted paramedian approach may be used as an alternative technique for US-assisted CNB. This may be useful in patients with narrow interspinous and interlaminar spaces due to disease or suboptimal patient positioning, or where the posterior and anterior complexes cannot be visualized. In contrast to the US-assisted midline approach that involves identification of neuraxial structures such as the posterior and anterior complexes, the key landmarks for the US-assisted paramedian approach are merely the neuraxial midline and the spinous processes.

The needle insertion site is 1 cm lateral to the midline and 1 cm above the line of the lower spinous process. The needle is inserted at a slight (5°-10°) medial and cranial angulation. If lamina is contacted, the needle is redirected cranially in small increments to walk off into the interlaminar space.

Neuraxial ultrasound has some limitations. In some elderly and obese patients, clear visualization of deeper structures in the vertebral canal, such as anterior and posterior complexes, can be problematic. In very thin patients, prominence of spinous processes can lead to poor skin-probe contact and poor-quality images. Operator-dependent factors may additionally contribute to lack of success with US-assisted CNB. In general, there can be a significant learning curve to acquisition and recognition of YS images. Learning studies suggest that at least 30-40 procedures are required to achieve competency.[9] More specifically, inaccuracy of skin marking is an inherent problem since tissue distortion (particularly in elderly patients with loose, mobile skin) and compression by the US probe is inevitable. The latter also may contribute to minor discrepancies when measuring required needle insertion depth.

US-assisted CNB does not supplant the conventional surface landmark-guided approach, which is simple and effective in the majority of patients. Rather, it is an advanced technique to be used when difficulty is anticipated or encountered, or when increased precision is desired. However, as with all advanced technical skills, neuraxial US should be practiced in straightforward patients until proficiency is attained.