Intravenous Regional Anesthesia: A New Look at an Old Technique

More than a century has passed since Dr August Bier first described vein anesthesia as a rapid-onset anesthetic technique for extremity surgery. The process required exsanguination of the extremity, application of a tourniquet, vascular cutdown for access, and administration of local anesthetic. The technique was considered cumbersome, and with the introduction of brachial plexus blockade, it was largely forgotten. However, in 1963, C. Holmes published a case series in Lancet using diluted lidocaine for intravenous anesthesia, thus reviving interest in the anesthetic technique.[1]

“Intravenous regional anesthesia is one of the oldest anesthetic techniques still in use today. More than 100 years of experience attest to its safety and utility in a wide variety of procedures.”

Today, the technique is commonly referred to as a Bier block or intravenous regional anesthesia (IVRA). It has been refined over the years and remains a core skill for anesthesiologists worldwide. Although IVRA has been used for lower-extremity surgery, it is most commonly performed on upper extremities for planned surgical procedures 60 minutes or shorter in duration. Indications, contraindications, advantages, and disadvantages as well as potential adverse outcomes must be considered when selecting IVRA as an anesthetic plan (see Table 1).

IVRA is a simple, effective anesthetic technique with a reported success rate of 96–100%.[2] Preparation for the block should ensure standard American Society of Anesthesiologists monitors application, adequate nil per os status, and immediate access to resuscitation equipment, including lipid emulsion. The technique requires reliable intravenous access in the operative extremity near the surgical site. Following Esmarch bandage exsanguination, the tourniquet is inflated. Tourniquet use has several accepted approaches, including single or double tourniquet and proximal (upper arm) or distal (forearm) tourniquet. Recently, use of a forearm tourniquet has increased because of diminished tourniquet pain and potentially improved safety with the use of decreased local anesthetic volumes.[3–5]

Although optimal inflation pressure has not been determined, the tourniquet is typically inflated to 100 mm Hg over systolic blood pressure or to a minimum of 250 mm Hg.[6-7] After the bandage is removed, local anesthetic is injected into the cannulated vein distal to the tourniquet. Dilute lidocaine (0.5%) is the most commonly used local anesthetic, and the total dose should not exceed 3 mg/kg. Following injection, the intravenous catheter is removed, pressure is held on the site, and within 5–10 minutes, reliable surgical anesthesia is achieved with adequate muscle relaxation. Once the surgical procedure is complete, the tourniquet is deflated. Following 25–30 minutes of tourniquet time, most of the lidocaine is bound to local tissue, and the risk of local anesthetic systemic toxicity (LAST) should be significantly diminished. However, a recent retrospective cohort study saw no increase in major complications for tourniquet times less than 20 minutes.[8]

Multiple mechanisms are responsible for surgical anesthesia during IVRA. Local anesthetic is carried through the veins to the intraneural capillary plexus, where it reaches the terminal nerve endings and secondarily diffuses out of the vascular space to affect local nerves. In addition, tourniquet inflation leads to ischemia as well as nerve compression; however, this is often delayed and not the primary mechanism for anesthesia.[9] 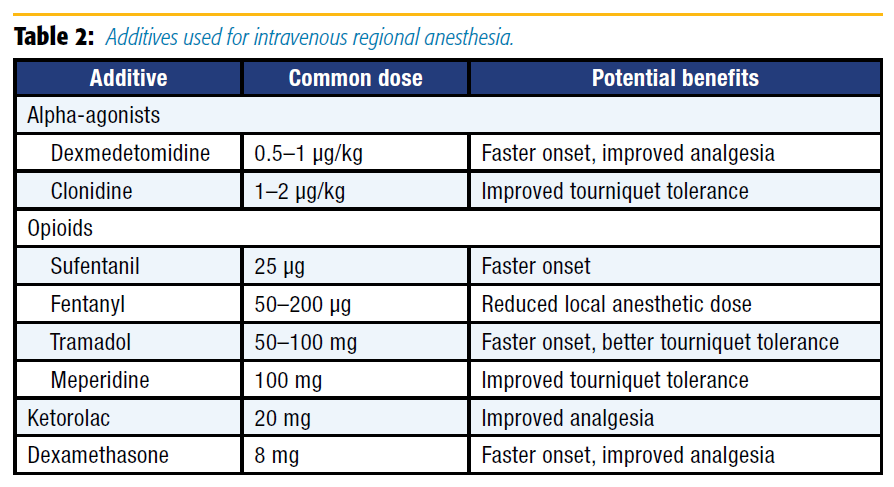 IVRA is safe but not entirely without the risk of complications. Bupivacaine was once used for IVRA in an attempt to improve postoperative analgesia. Its use was abandoned after reports of LAST upon tourniquet release; this was especially true in cases of premature release of the tourniquet.[10] LAST during IVRA may still occur despite the use of less cardiotoxic lidocaine, with seizures reported at doses as low as 1.4 mg/kg and cardiac arrest with doses as low as 2.5 mg/kg. Importantly, seizures have been reported after tourniquet deflation, despite tourniquet times up to 60 minutes, and may also occur up to 10 minutes after the tourniquet is completely deflated. This indicates the need for continued vigilance during tourniquet deflation and during transport from the operating room, as this may fall within the window of time that seizures may occur.[11]

The most common local anesthetics for IVRA are lidocaine (United States) and prilocaine (Europe).[12] Given that ropivacaine is less cardiotoxic than bupivacaine, several studies have investigated the use of ropivacaine for IVRA. Ropivacaine use results in similar onset times and tourniquet tolerance as with lidocaine but increased time to recovery of sensory and motor function and improved postoperative analgesia. Cardiotoxicity is still possible with ropivacaine, and its widespread use for IVRA is limited by this potential. However, a recent review of studies evaluating ropivacaine IVRA described tinnitus and dizziness as reported complications but no cases of cardiotoxicity.[12]

The primary disadvantage of IVRA compared with nerve or plexus blocks is the provision of limited postoperative pain relief. As the procedure is now more than 100 years old, many modifications to the original Bier block, particularly additives, have been evaluated (see Table 2).

The study of additives in IVRA is difficult in that systemic absorption of the additive must always occur after tourniquet deflation; hence, careful protocol design must attempt to exclude the systemic effect of the medication and isolate its block-related effect. Additives may improve the block's quality, onset time, duration, or performance (ie, motor block). Opioids added to IVRA may improve tourniquet pain and onset time modestly; these benefits are generally not outweighed by the significant occurrence of nausea, vomiting, and sedation at tourniquet deflation.[13] Recent interest in the use of tramadol and sufentanil as adjuncts in IVRA is inspired by the local anesthetic-like properties of both drugs; indeed, both agents seem to shorten the onset of sensory block. However, neither appears to confer significant postoperative analgesic benefits. The addition of nondepolarizing muscle relaxants may improve motor block and in combination with fentanyl may result in acceptable blockade at a reduced dose of local anesthetic. This benefit, however, is offset by the potential for increased sensory block onset time. Furthermore, the theoretical analgesic benefit of muscle relaxants added to IVRA solutions (through reduction in muscle spasm) has not been convincingly shown.[12]

The use of nonsteroidal anti-inflammatory drugs (NSAIDs) as adjuncts for IVRA has been widely studied. A review by Choyce and Peng in 2002 summarized the state of the literature at that time, with ketorolac shown to reduce postoperative pain after IVRA.13 However, the subsequent retraction of several articles published regarding NSAIDs and acute pain have clouded the picture.14 Recent studies have indirectly addressed that question by investigating the use of additional adjuvants. Two of those studies have associated ketorolac with postoperative pain and analgesic requirements when added to the IVRA solution compared with lidocaine alone but did not include a systemic administration control group.[15-16]

Clonidine and dexmedetomidine have also been added to IVRA solutions with mixed results. Clonidine may increase tourniquet tolerance time and modestly reduce postoperative pain scores, but sedation and hypotension after tourniquet release are significant adverse effects.[13] Dexmedetomidine is more selective for alpha-2 receptors than clonidine, which accounts for its preferential sedative over hemodynamic effects. At doses of 0.5–1 μg/kg added to lidocaine, dexmedetomidine improves postoperative analgesia and may shorten sensory block onset time.[17-18] Importantly, hemodynamic changes (bradycardia, hypotension) may still occur with dexmedetomidine but seem less severe than with clonidine. A wide variety of other additives have been studied to improve IVRA, although most studies are small and often limited by the lack of a systemic control group. Dexamethasone in a dose of 8 mg added to plain lidocaine 3 mg/kg shortens block onset and improves postoperative analgesia in some small studies,[19] and this effect may be magnified by the addition of other additives such as ketorolac.[16] The addition of ketamine to the block solution improves postoperative and intraoperative analgesic requirements[20]; however, this effect seems to be no different than with systemic administration.[21] The addition of potassium[22] confers no advantages, and changing the temperature of the injectate does not affect the quality of the block, although warmer solutions are less painful on injection.[23]

Intravenous regional anesthesia is one of the oldest anesthetic techniques still in use today. More than 100 years of experience attest to its safety and utility in a wide variety of procedures. Recent investigations have sought to improve the technique via lower doses of local anesthetic with more distal tourniquets, the use of longer-acting local anesthetics (ropivacaine), and the addition of other medications (eg, dexmedetomidine) to the block solution. As always, vigilance, careful patient selection, consideration of comorbidities, and case-by-case individual assessment by a skilled anesthesiologist are necessary to ensure optimal outcomes.