“Oh Mg!” Magnesium: A Powerful Tool in the Perioperative Setting

Although a little bag of magnesium sulfate might not look like much, the divalent cation possesses numerous attributes that have served anesthesiologists well for many decades. Magnesium is a cofactor to ATP production, aids in ion transportation, competitively antagonizes calcium release, inhibits catecholamine release, and antagonizes N-methyl-D-aspartate (NMDA) receptors. Although its analgesic properties may have been overlooked for newer and more sophisticated drugs, magnesium has resurfaced in the era of bundled payments, enhanced recovery pathways, and multimodal analgesic plans.

“Although its analgesic properties may have been overlooked for newer and more sophisticated drugs, magnesium has resurfaced in the era of bundled payments, enhanced recovery pathways, and multimodal analgesic plans.”

Over time, magnesium has been used for a variety of perioperative applications. It was first examined as a potential induction agent in the early 1900s, but its use was unsuccessful because of poor bioavailability and its limited capacity to cross the blood-brain barrier. However, increased interest in the 1980s focused on magnesium's ability to antagonize NMDA receptors. Since then, numerous studies, reviews, and meta-analyses have attempted to clarify the role of perioperative magnesium.

Both animal and clinical studies have highlighted magnesium's antinociceptive effects. Its proposed mechanism of action includes competitive and noncompetitive NMDA antagonism of hippocampal presynaptic calcium channels that regulate aspartate and glutamate. Both pathways are thought to contribute to the prevention of central sensitization. In animal models, magnesium has inhibited hyperalgesia, amplified the analgesic effects of lowdose morphine, and delayed morphine tolerance.[1-2]

Several studies, reviews, and meta-analyses have examined intravenous (IV) magnesium in the intraoperative setting with conflicting results. In patients undergoing abdominal hysterectomy and randomized to magnesium (50 mg/kg bolus with 15 mg/kg/ hr infusion for 6 hours) or saline, postoperative pain scores and analgesic demand boluses did not differ between the groups.[3] However, all the patients had patient-controlled epidural anesthesia. In a separate study of hysterectomy patients, subjects received magnesium (200 mg bolus on induction and 200 mg/hr infusion for 5 hours) or placebo and were followed for 48 hours.[4] The magnesium group demonstrated higher pain scores 3 hours following their surgical procedure yet decreased opioid consumption 1 hour following surgery, but no other differences were noted between groups. In children undergoing tonsillectomy and administered placebo, ketamine, magnesium (30 mg/kg bolus intraoperatively), or ketamine plus magnesium, significant differences in pain scores were not noted between groups.[5] With all these studies, the wide variety of doses and baseline pain medications, as well as numerous other confounding factors, may have contributed to the negative findings.

Furthermore, magnesium can counter remifentanil-induced hyperalgesia in patients undergoing thyroidectomy. However, it can also mask hypocalcemia, a potential complication in thyroidectomies.[9]

A meta-analysis of 13 studies with 694 patients undergoing a variety of surgical procedures found that a magnesium bolus (30–50 mg/kg) and infusion (6–25 mg/kg/hr) decreased opioid consumption without compromising hemodynamic stability.10 Based on this information and excluding studies that used alfentanil, morphine, and remifentanil for the sake of standardization, a loading dose of magnesium (30–50 mg/kg given 10–15 minutes prior or shortly after induction) followed by an infusion (8–15 mg/kg/hr) significantly reduced fentanyl consumption overall and in surgeries associated with significant pain (see Table 1).[10] 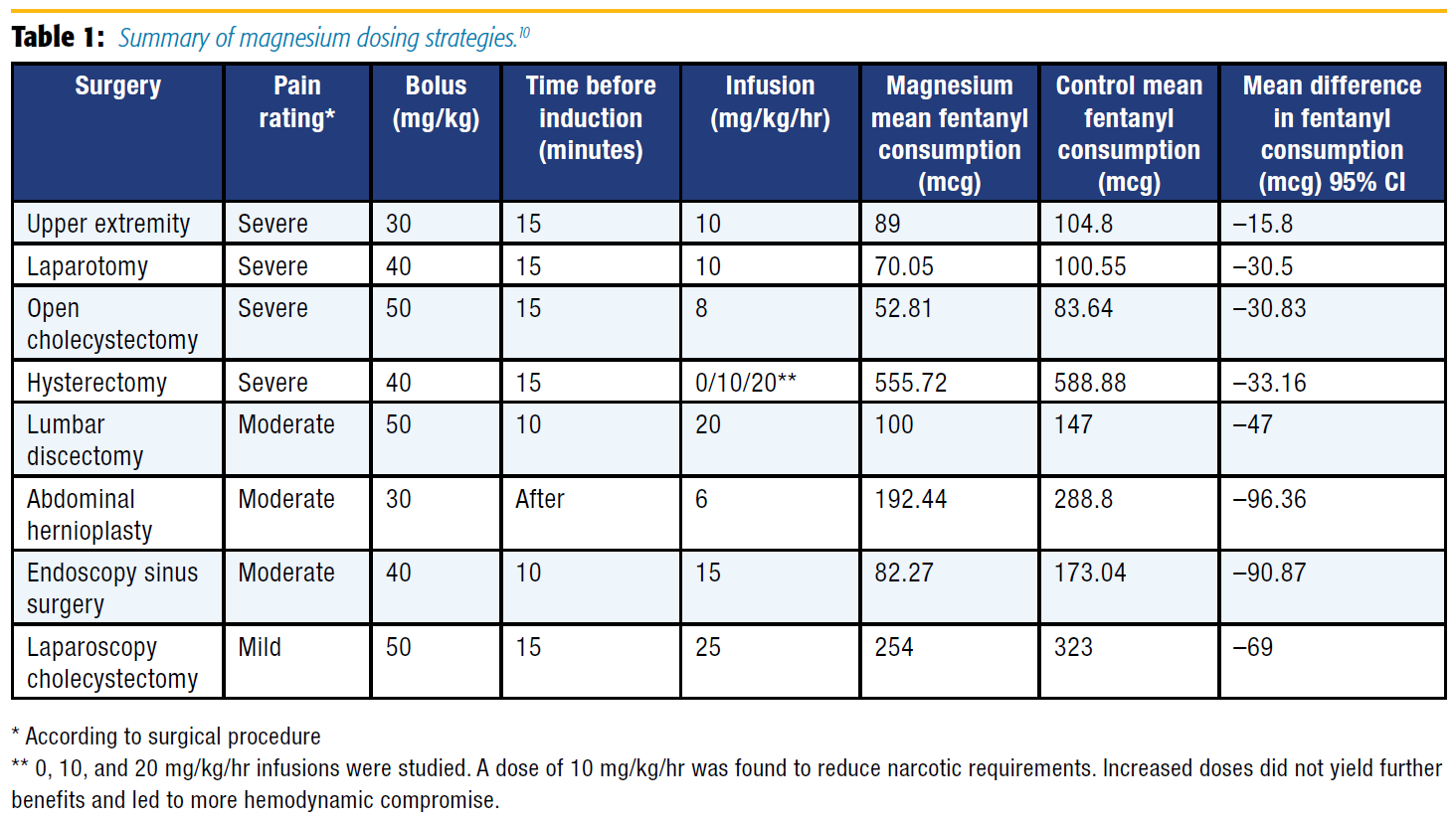 Other Perioperative Roles and Adverse Effects

When using perioperative magnesium, providers must understand its other properties and possible adverse effects. Magnesium has documented central and peripheral neurologic effects. It increases microcirculation in cerebral blood flow and may prevent vasospasm in patients suffering from aneurysmal subarachnoid hemorrhage.[11] In parturients with pre-eclampsia, magnesium provides systemic, cerebral, and uterine vasodilation coupled with neuroprotection and seizure prophylaxis. This offers maternal and fetal neuroprotection and may lower the risk of fetal cerebral palsy in women at risk for preterm birth.[12] Peripherally, magnesium potentiates nondepolarizing muscle relaxants at both the pre- and postsynaptic sites. Magnesium infusions (60 mg/kg over 15 minutes) administered prior to induction can reduce rocuronium onset time by 65%.[13] Similarly, magnesium may reduce succinylcholine induced fasciculations[14] and the incidence and intensity of myoclonus caused by etomidate.[15]

As a competitive antagonist of L-type calcium channels, magnesium also impacts the cardiac and pulmonary systems. Magnesium has both antiarrhythmic properties and is the treatment for Torsades de Pointes (pulseless: 1–2 g IV over 5–20 minutes; pulse present: 1–2 g over 5–60 minutes). Concomitantly, it promotes arterial vasodilation and prevents catecholamine secretion.[16] Those cardiovascular characteristics may be desirable to assist in the perioperative management of patients with pathologically elevated hemodynamics, such as pheochromocytoma. Moreover, antagonism of calcium-induced muscle contraction by magnesium potentiates bronchodilation, and a 2 g IV bolus of magnesium improves peak expiratory flow rates and forced expiratory volumes in acute asthma attacks.[17]

Although magnesium has numerous benefits and a large therapeutic window, its use is not entirely without risk: a summary of magnesium toxicity is presented in Table 2. Consequently, close monitoring is required for all patients receiving therapeutic magnesium, and administration must be stopped with the development of any signs or symptoms of hypermagnesemia. Additionally, IV calcium acts as an antagonist to magnesium and should be administered immediately if patients experience sequelae of hypermagnesemia.

Therapeutic magnesium administration should be used with caution or avoided in certain patient populations. Given magnesium's propensity to cause muscle weakness and electrocardiogram changes, it is best avoided in patients with pre-existing atrioventricular block and those with chronic neuromuscular diseases, such as myasthenia gravis. Similarly, because magnesium homeostasis is maintained through renal excretion, patients who have renal impairment are at higher risk for accumulating toxic levels. Notably, patients with end-stage renal failure may require dialysis to reduce magnesium levels. Conversely, patients with normal renal function or moderate renal impairment may receive fluids and loop diuretics to hasten reduction of magnesium levels.

The cost of the opioid epidemic in the United States is astronomically high on patients, families, and communities. Shipton et al[18] reported that the economic liability of opioid misuse in the United States is projected to exceed $78 billion a year. This, in combination with recent drug shortages in the operating room, has resulted in increased demand for anesthesiologists to seek out nonopiate analgesic strategies in the perioperative period, in which magnesium plays an important role.[19]

Magnesium has a long history of perioperative use for numerous indications. A definitive analgesic dose should be the product of consideration of patient comorbidities, type of surgery, and anesthetic requirements. Based on recent literature, a loading dose of magnesium of 30–50 mg/kg followed by an infusion of 8–15 mg/ kg/hr can be a powerful tool in an anesthesiologist's antinociceptive arsenal. In the era of enhanced recovery after surgery and opioid abuse epidemics, the time has never been better to incorporate this potent analgesic into our daily perioperative care.