How I Do It: Ultrasound-Guided Injection for the Shoulder (Part 2)

This article summarizes the anatomy, sonoanatomy, efficacy, accuracy, and the injection techniques for the glenohumeral joint (GHJ) and subacromial subdeltoid bursa (SASDB). Patient selection for those injections is also reviewed. A detailed review can be found in two recent articles.[1,2]

The GHJ is a ball-and-socket joint composed of a round humeral head and a relatively small, flat pear-shaped glenoid fossa. The glenoid cavity is deepened by the presence of a fibrocartiginous rim, the glenoid labrum (Figure 1). The joint capsule is attached medially to the margin of the glenoid cavity extending to the base of the coracoid process and laterally to the anatomical neck of the humerus (Figure 1).[3,4] The synovial membrane lines the capsule on its deep surface and overlies the long head of biceps (LHB) tendon. From there, three recesses are formed: the biceps tendon sheath anteriorly, the subscapularis recess medially, and the axillary pouch inferiorly (Figure 2).[3] The presence of the LHB recess allows a potential portal for GHJ entry.[1,3] 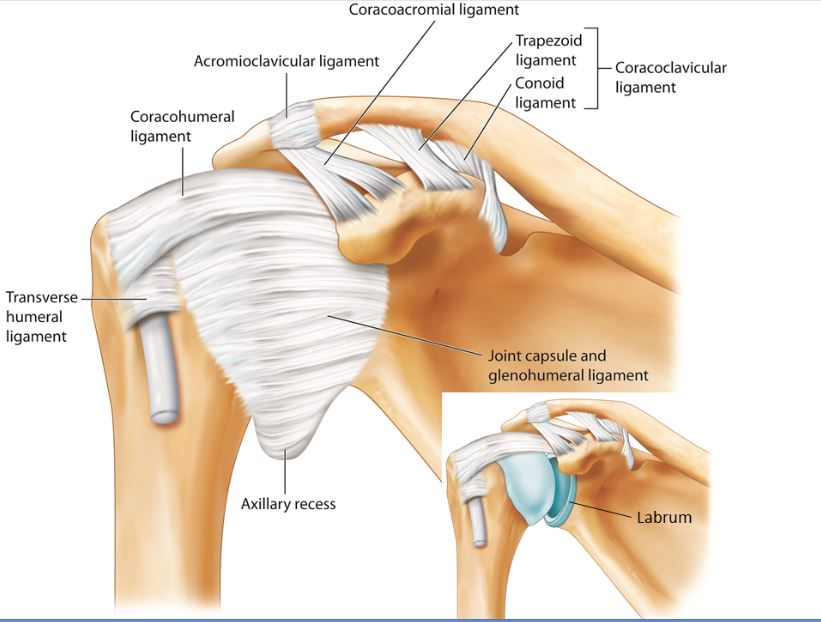 Figure 1: Glenohumeral joint showing various ligaments and the joint capsule. The anterior capsule is reinforced by the superior, middle and inferior glenohumeral ligament. The insert shows the articular surface, glenoid process, and labrum. Reprint with permission from usra.ca.

The GHJ can be accessed anteriorly, posteriorly, and from the rotator cuff interval.[1]  The techniques for the anterior and posterior approaches will be described. For the posterior approach, the patient is placed in either the sitting or lateral decubitus position with the ipsilateral hand placed on the contralateral shoulder. A linear probe of frequency 6-13 MHz is usually used unless the patient is of very high body mass index or strong muscular build. The ultrasound probe is placed just caudal to the acromion over the infraspinatus tendon (Figure 3). The key structures to identify are humeral head, labrum, infraspinatus tendon, and joint capsule. For the anterior rotator cuff interval approach, the patient is placed in supine position and a high frequency linear probe 6-13 MHz is used. The first scan is similar to the scanning of the long head of the biceps (LHB) tendon at the bicipital groove. Following this scan, the LHB is traced in the cephalad and medial direction until it is seen in between the supraspinatus and subscapularis muscle underneath the coraco-humeral ligament (Video 1). 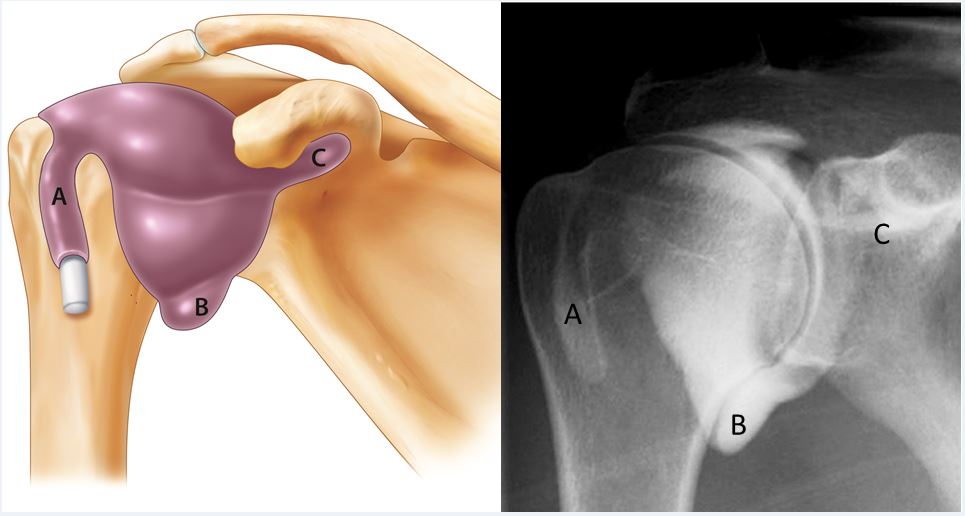 The target for the posterior approach is between the free edge of labrum and the cartilage of humeral head underneath the capsule (Video 2).[1,2] Once the target is obtained, a 22 gauge 3.5-inch spinal needle is inserted from lateral to medial direction with in-plane technique. The injectate is 4 mL of local anesthetic with steroid (e.g., 2% lidocaine and 40 mg methylprednisolone acetate). If one encounters resistance during injection with the posterior approach, two maneuvers can be used to adjust the needle: turn the bevel 90 degrees or withdraw the needle slightly. Correct placement of injectate in the posterior approach will result in the spread of medication beneath the joint capsule. 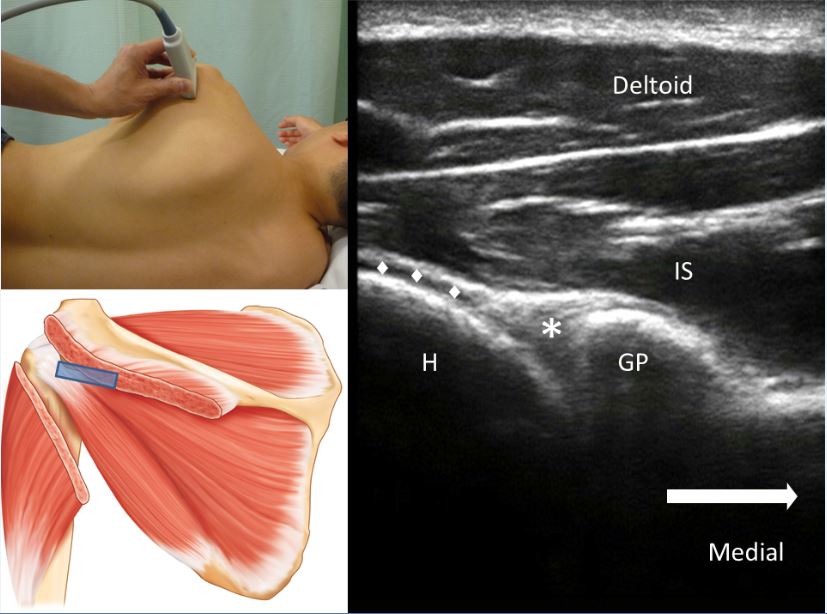 Figure 3: Ultrasound image of the posterior glenohumeral joint. The glenoid process and humeral head both appear as hyperechoic structures with anechoic shadow. The insert on the top shows the position of the patient and the ultrasound probe while one below shows the probe position and the structures underneath; IS=-infraspinatus muscle; H=humeral head; GP=glenoid process; *=glenoid labrum; •=the articular cartilage of the humeral head. Reprint with permission from usra.ca.

Video 1: Video showing the scan of the rotator cuff interval. Created by Dr. Phillip Peng and reproduced with permission from usra.ca.

Video 2: Video showing the needle insertion for the glenohumeral joint injection. Created by Dr. Phillip Peng and reproduced with permission from usra.ca.

The target for the rotator cuff interval approach is the space on either side of the LHB deep to the coracohumeral ligament (Figure 4). Once the target image is obtained, a 25 gauge 1.5-inch needle is inserted either out-of-plane (caudal to cephalad direction) or in-plane (lateral to medial direction). The injectate is local anesthetic with steroid as previously described.[1,2] 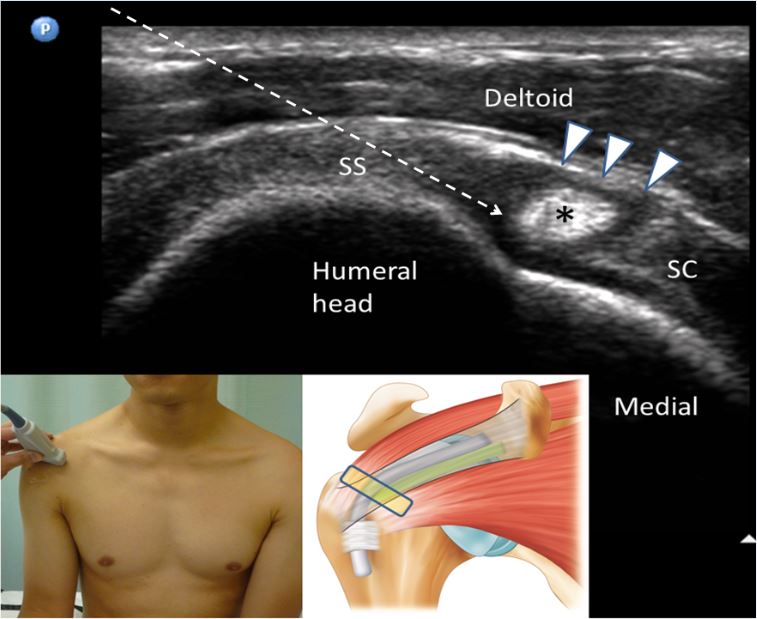 Figure 4: Ultrasound image of the rotator cuff interval and the needle insertion trajectory. The insert shows the position of the probe and corresponding anatomical structures underneath. The LHB tendon (*) is always hyperechoic at this level and sandwiched between the supraspinatus tendon (SS) laterally and subscapularis tendon (SC) medially. The coracohumeral ligament (arrow heads) forms the roof of the interval. The needle (indicated by the dashed arrow) is inserted from lateral to medial into the rotator cuff interval. Reprint with permission from usra.ca.

Video 3: Dynamic scan of the supraspinatus tendon in the long axis. Arrows indicate the subacromial subdeltoid bursa. Created by Dr. Phillip Peng and reproduced with permission from usra.ca.

Video 4: Video showing the dynamic scan of the supraspinatus tendon in the long axis and then to short axis. Created by Dr. Phillip Peng and reproduced with permission from usra.ca.

Video 5: Video showing the injection of the subacromial subdeltoid bursa. Created by Dr. Phillip Peng and reproduced with permission from usra.ca.

The role of GHJ injection in the management of arthrosis is unclear. There are no studies specifically addressing the efficacy in GHJ arthrosis. A recent practice guideline from the American Academy of Orthopedic Surgery found no evidence to support or refute the use of intra-articular corticosteroid injection for the treatment of GHJ arthrosis.[7] There is some evidence to support the use of viscosupplement in GHJ osteoarthritis, an off-label use for viscosupplement, based on an industry-sponsored study.[8]

The overall success rates of the landmark-based technique range from 27% to 100%.1 In contrast, the success rates of the ultrasound-guided studies are consistently higher. A recent review examining the accuracy of GHJ injection demonstrated that the pooled success rates of the landmark-based and image-guided were 79% and 95% respectively.[9] Of note, an interesting comparison study was conducted examining the ultrasound-guided approach and landmark-based (conventional) approach in various joint interventions. The ultrasound-guided injections were all performed by a rheumatology trainee (9 months into a rheumatology program with 8 sessions of MSK ultrasound training), and the conventional approach was all performed by 9 rheumatology consultants with a median of 9 years of experience.[10] The accuracy rates for shoulder injections were 63% and 40% for the ultrasound and conventional groups, respectively. Despite the contrast in experience, the trainee achieved better accuracy, which was associated with better pain relief at the sixth week.

There are four rotator cuff muscles: subscapularis (SSC), supraspinatus (SS), infraspinatus (IS) and teres minor (TMi) muscles. The rotator cuff is a tight layer of tendons around the GHJ on the anterior (SSC), superior (SS), and posterior (IS and TMi) aspects of the shoulder.[1,3,11] It plays an important role to stabilize the humeral head in the shallow glenoid fossa during movement of the arm. The subacromial subdeltoid bursa (SASDB), the largest bursa in the body, is located inferior to the acromion, the coraco-acromial ligament (CAL), and the deltoid muscle. It overlies the superior aspect of the SS tendon.[3,11] It also extends anteriorly to cover the bicipital groove and medially to the coracoid process (subcoracoid bursa). The lateral border may reach approximately 3 cm below the greater tuberosity.[3] The main role of the SASDB is to minimize attrition of the cuff against the coracoacromial arch (acromion and CAL) and deltoid muscle during movements of the arm.

To reveal the SASDB, the patient is placed either supine or sitting in the reclining position with the back supported. The patient is advised to put the hand in modified Crass position (gesture of “put the money back in the back pocket”). The ultrasound probe used is high frequency 6-13 MHz linear, and the SASDB can be viewed in either long- or short-axis (Videos 3 and 4).

The target is the bursa outlined by the peribursal fat. A 25 gauge 1.5-inch needle or 22 gauge 3.5-inch spinal needle is inserted in-plane. If the needle tip is in the bursa, a small volume (0.5 mL) of injectate will be seen spreading across the bursa plane (Video 5). Once the position of the needle is satisfactory, 4 mL of local anesthetic with steroid (0.25% bupivacaine and 40 mg methylprednisolone acetate) can be injected.

The indication for SASBD injection is subacromial impingement syndrome, which covers a constellation of conditions: partial- and full-thickness rotator cuff tear and rotator cuff tendinopathy.[12] The common presentations of patients with rotator cuff disease are pain and stiffness. Pain is the predominant symptom, often most troubling at night and with overhead activities. The rotator cuff tear can be articular-sided, bursal-sided, or intratendinous, and the incidence increases with age. The tear can be partial- or full-thickness, but partial tendon lesions are often much more painful than full-thickness tears.[13] Literature Review

The efficacy of SASDB injections for rotator cuff disease has been the subject of multiple reviews.[1] One of the more recent systematic review included 9 randomized controlled trials specifically appraising the use of subacromial steroid injections in rotator cuff disease.[14] The authors concluded that subacromial steroid injection was not efficacious in the treatment of rotator cuff disease. It is important to note that the injection techniques included in those 9 studies were all ‘‘blind’’ injection, with the exception of 1 study in which injections were performed with X-ray guidance. Previous investigation has suggested that the X-ray-guided technique is not reliable or dependable.[15]

In a practical clinical setting, subacromial injection is usually performed in a multimodal approach with physiotherapy or a rehabilitation protocol. A recent large, pragmatic, randomized controlled trial[16] showed that the subacromial steroid injection decreased pain and improved functional outcome at 1 and 6 weeks, but there was no difference compared with exercise alone at 3 and 6 months. The absence of long-term efficacy is not uncommon for interventions of common MSK problems. In examining results from recent high-quality randomized controlled trials for common MSK disorders, Foster et al found no or very small differences in the effectiveness of different approaches when based on long-term outcomes (6-12 months).[17] This has been exemplified by the various shoulder injection techniques described in the previous sections.

The SASDB is a very small target, and precise injection should be performed with image guidance. With the exception of one study (which showed 100% success rate[18]), the literature demonstrates success rates for landmark-based approaches ranging from 29% to 70% in clinical studies and 70% to 91% in cadaver studies.[1] The success rates were similar irrespective of different approaches (posterior, anterolateral, and lateral) for the blind injection and experience and confidence of the practitioners. In studies in which the blind procedures were performed by very experienced orthopedic surgeons and shoulder specialists, the confidence correlation (the accuracy rate when the practitioners were very confident that they were accurate) ranged from 42% to 66%.[19.20]

Among those commonly-used imaging modalities, Mathews and Glousman[15] found that X-ray was an unreliable method in confirming the location of contrast in the subacromial space. Ultrasound-guided injection was validated with MRI in one study, and the accuracy was 100%. The use of the ultrasound-imaging technique in the diagnosis of rotator cuff disease has been extensively investigated, and the reliability is comparable with that of MRI.[21-23]