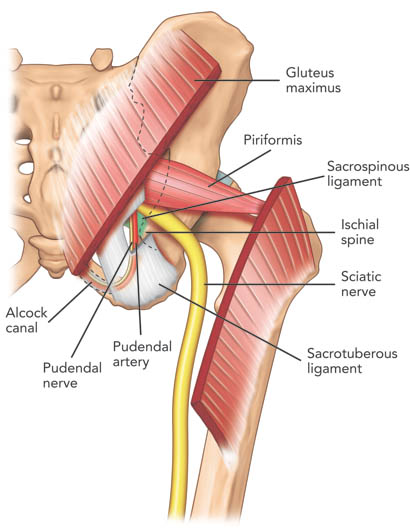 Figure 1. Posterior view of the pelvis showing the pudendal neurovascular bundle and piriformis muscle. The gluteus maximus muscle was cut to show the deeper structures. Note that the pudendal nerve and artery run in the interligamentous plane between the sacrospinous and sacrotuberous ligaments and subsequently into the Alcock canal. Reproduced the with permission from USRA (www.usra.ca).

The pudendal nerve is formed from the anterior rami of the second, third, and fourth sacral nerves (S2, S3, and S4). Exiting the pelvis through the greater sciatic notch, the pudendal nerve is accompanied by the internal pudendal artery on its medial side and travels dorsal to the sacrospinous ligament abutting the attachment of the latter to the ischial spine (Figure 1). At this level, the nerve is situated between the sacrospinous and sacrotuberous ligaments in the interligamentous plane.[1][4-6] The nerve then swings ventrally to enter the lesser sciatic foramen and Alcock’s canal.[5][7-8] The latter is the fascial tunnel formed by the duplication of the obturator internus muscle under the plane of the levator ani muscle on the lateral wall of ischiorectal fossa (Figure 1).

The course of the dorsal nerve of penis under the subpubic arch or sulcus nervi dorsalis penis exposes the nerve to compression by the nose of the saddle of a bicycle.[9]

Fluoroscopic approaches to pudendal nerve blockade between the sacrospinous and sacrotuberous ligaments (interligamentous plane) have been described and validated.[10-11] Needles are placed at the tip of the ischial spine, presumably in close proximity to the pudendal nerve. Since the ischial spine only acts as a surrogate landmark for the nerve, the needle tip may not be reliably within the interligamentous plane (the site of entrapment). Furthermore, the proximity of the sciatic nerve is unknown, placing it at risk for being anesthetized as well.

CT and MRI guided blocks have obvious advantages in imaging the pelvic anatomy,[3][12-15] and are the only recommended techniques for the Alcock’s canal. Unfortunately, many chronic pain physicians may not have access to CT and MRI for this procedure.

In contrast to the major nerves of the extremities, the pudendal nerve is a thin nerve, measuring 4-6 mm at the level of the ischial spine.[16] Nerves of this size can be difficult to detect with ultrasound at the ischial spine, which is on average 5 cm deep to the skin.[16] These circumstances may account for why the pudendal nerve is visualized with ultrasound in only 47.2% of the time.[16]

Figure 2A. Three different positions of the ultrasound transducer in scanning the piriformis muscle and the pudendal nerve. Reproduced with permission from USRA (www.usra.ca) 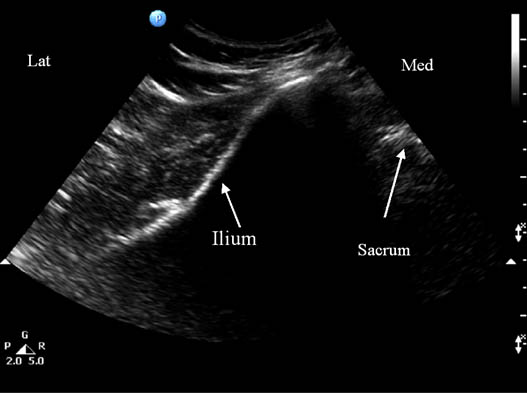 Figure 2B. Sonogram showing underlying bony structures with the ultrasound transducer located at position A shown in figure 2A. Reproduced with permission from USRA (www.usra.ca). 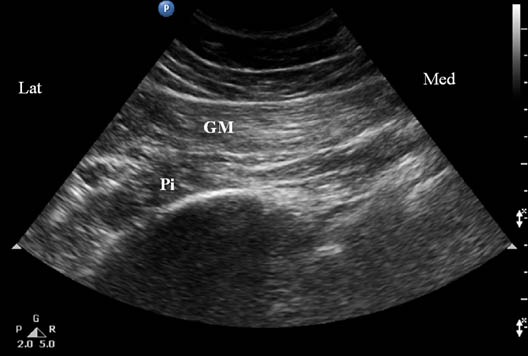 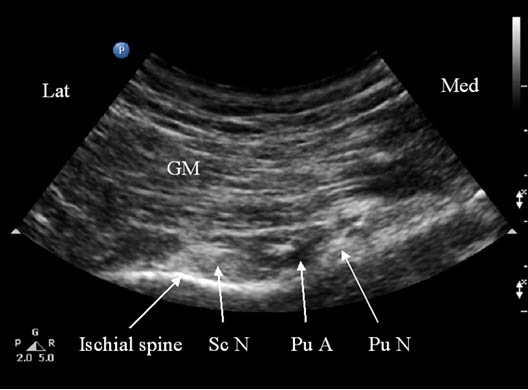 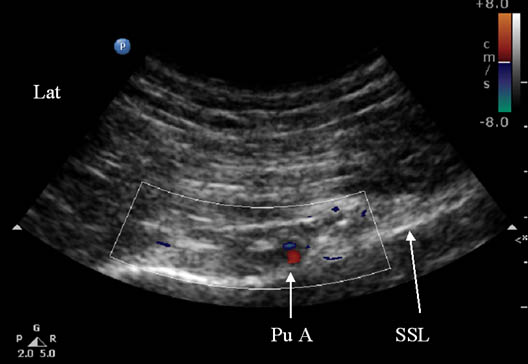 The ultrasonographic approach for pudendal nerve blockade within the interligamentous plane has been previously described.[17-18] Advantages of ultrasound include the ability to visualize soft tissue structures in the gluteal region as well as equipment portability and lower cost compared to CT or MRI techniques.

The patient is placed in a prone position. A curvilinear probe with a low frequency (2–5 MHz) is required to visualize the interligamentous plane given its location deep to the gluteus maximus muscle. The ultrasound transducer should be first placed transversely over the posterior superior iliac spine (PSIS) to visualize the sacroiliac joint. Once this is seen, the transducer is moved laterally to view the ilium (Figure 2 A–E).

The posterior aspect of the iliac wing should be clearly visualized as a hyperechoic line descending laterally. Once the iliac wing is identified, the angle of the probe is rotated such that it would be in line with the long axis of the piriformis muscle as it runs from the sacrum to the greater trochanter. As scanning continues caudally, the hyperechoic line of the ilium starts to recede from the medial aspect of the image at the level of the sciatic notch. The lateral aspect of the ultrasound image continues to display a curved hyperechoic line representing the ischium. At this level, two separate muscular layers are identified: the gluteus maximus and the piriformis muscles. Scanning slightly more caudally, the curved line of the acetabulum becomes straighter as it transitions to the ischial spine. At this point, the sacrospinous ligament should be seen as a slight hyperechoic structure extending from the tip of the ischial spine, projecting towards the sacrum.[16][19] The sacrotuberous ligament may also be seen at this level deep to the gluteus maximus muscle. The piriformis muscle will no longer be visualized. The pudendal artery lies slightly medial to the tip of the ischial spine and the pudendal nerve situated medial to the artery. It may not be clearly visualized under ultrasound given its small diameter and depth in the gluteal region. A second artery may be seen lateral to the ischial spine. This is the descending branch of the inferior gluteal artery which is in close approximation to the sciatic nerve.

Optimization of the ultrasound image before needle insertion is vital to the success of this block. The image must clearly show the interligamentous plane formed by the sacrotuberous and sacrospinous ligaments as well as the pudendal artery (the pudendal nerve may or may not be seen). The purpose of image optimization is to ensure that the injected solution is well contained between the ligaments (interligamentous plane) where the nerve is potentially compressed. The image quality of these soft tissues should not be compromised by tilting the probe to find the needle. Instead, the needle must be reinserted or repositioned until it is within the path of the ultrasound beam.

The needle is inserted medial to the probe so that the tip comes to lie medial to the pudendal artery. Frequently, the needle must be inserted at a steep angle to reach this target and it may not be well visualized. In the authors’ experiences, location of the needle tip is usually achieved by visualization of the spread of injectate (hydrolocation). As the needle passes through the sacrotuberous ligament, increased resistance is felt which quickly gives way as the needle passes through the ligament. The needle tip should now be between the sacrotuberous and sacrospinous ligaments. Injection of 1-2 mL of normal saline confirms the needle position within the interligamentous plane.

A solution containing local anesthetic and steroid is injected when the final needle position is deemed satisfactory. Epinephrine is avoided so that vasoconstriction of the pudendal artery does not occur. If solution is noted to spread laterally past the pudendal artery, the needle should be repositioned more medially to avoid blockade of the sciatic nerve.

There are three reports of ultrasound guided pudendal nerve block.[16-19] In the only study that assessed clinical outcome,[16] a needle was placed under ultrasound guidance in 17 patients and the position verified by fluoroscopy. A local anesthetic and steroid admixture was injected and the spread of solution was assessed in real time with ultrasound. The pudendal nerve was visualized well in approximately 30% of patients, and poorly in approximately 12%. Electrical stimulation through the needle did not add any useful information. Spread of solution was visualized in 88% of patients and there was agreement between ultrasonographic and fluoroscopic localization of needle tip position in 82% of patients. All patients experienced a sensory block immediately after the procedure.

It is considered an intermediate (level 2) block mainly because the target lies deep and there is a potential risk of entering the greater sciatic foramen into the pelvis.

A step-by step scanning approach as described above is recommended for a thorough evaluation of the gluteal region. Otherwise, one may not visualize the key internal muscular, bony and vascular landmarks leading to the tiny pudendal nerve.